This one is all plot no computer or present related stuff in it.  But I am keeping the same subject tabs just so I can keep the storyline all collated and stuff. 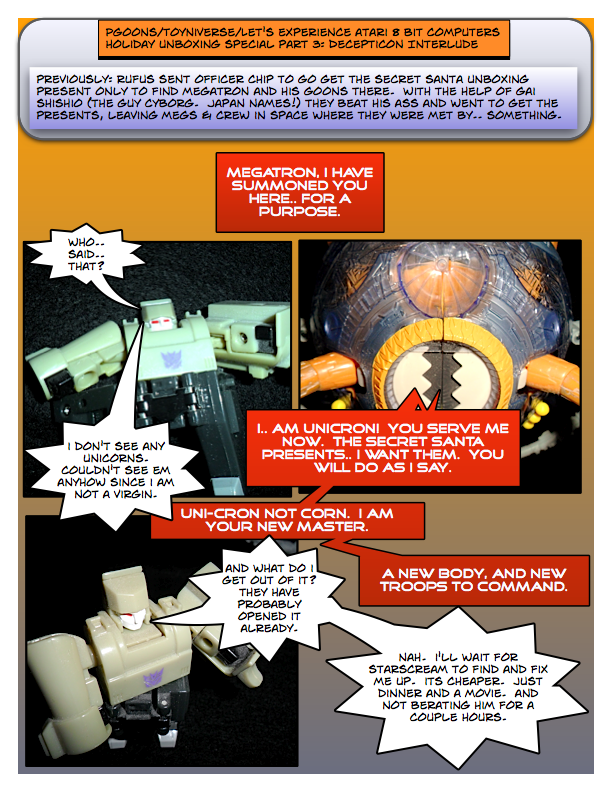 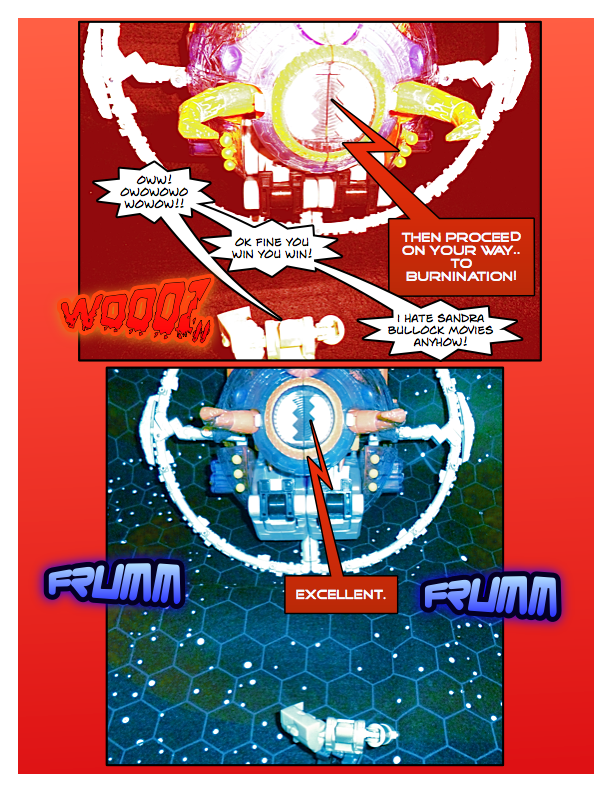 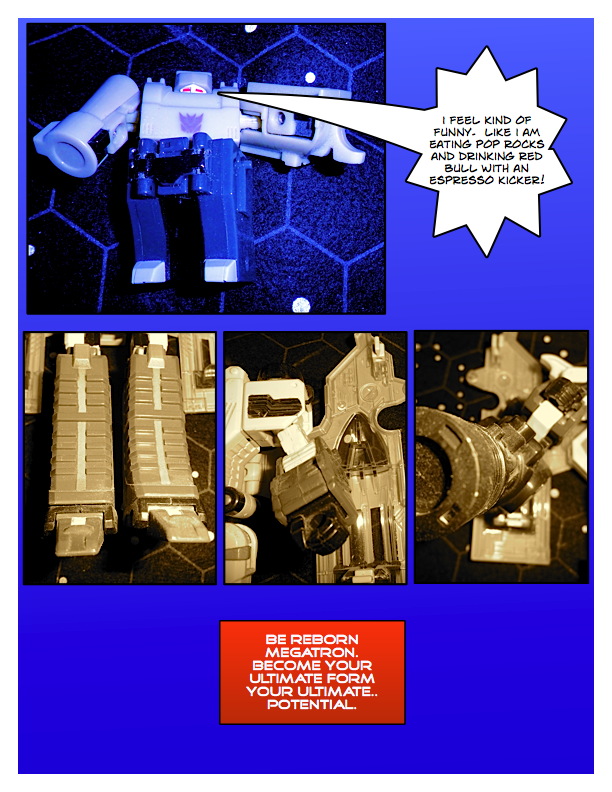 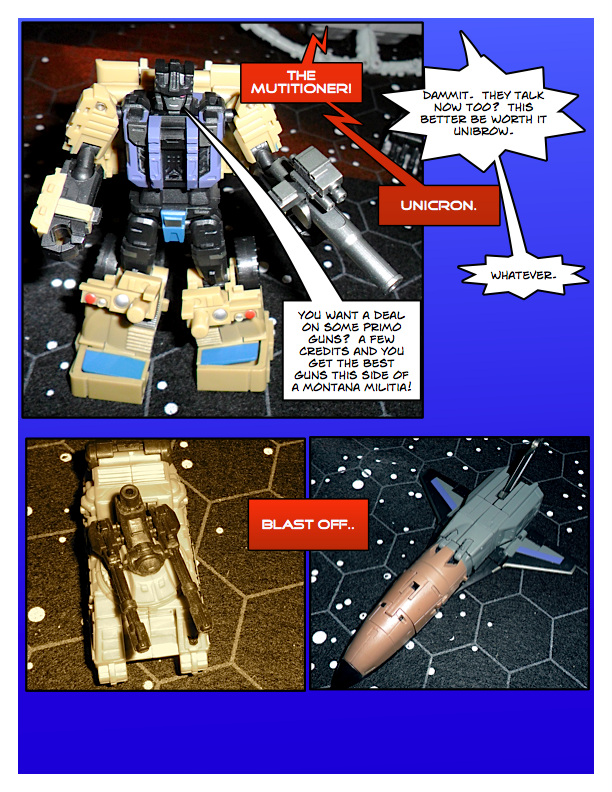 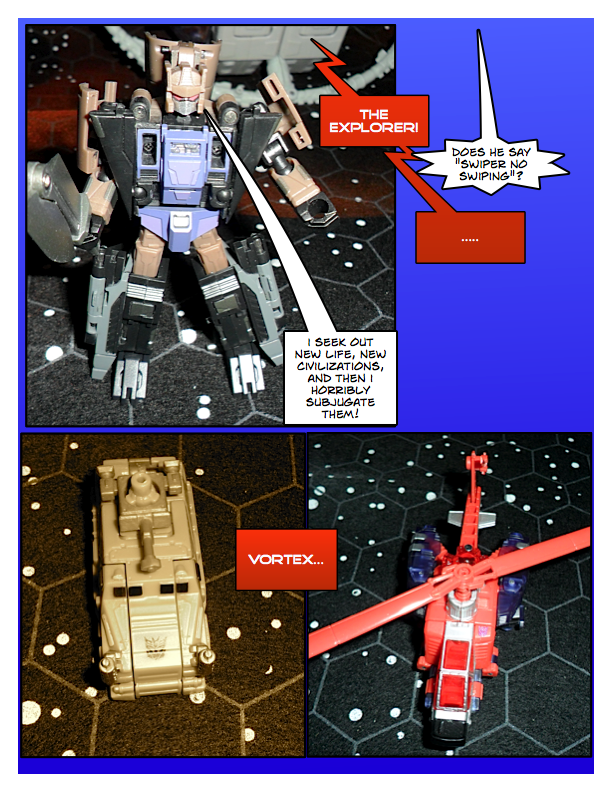 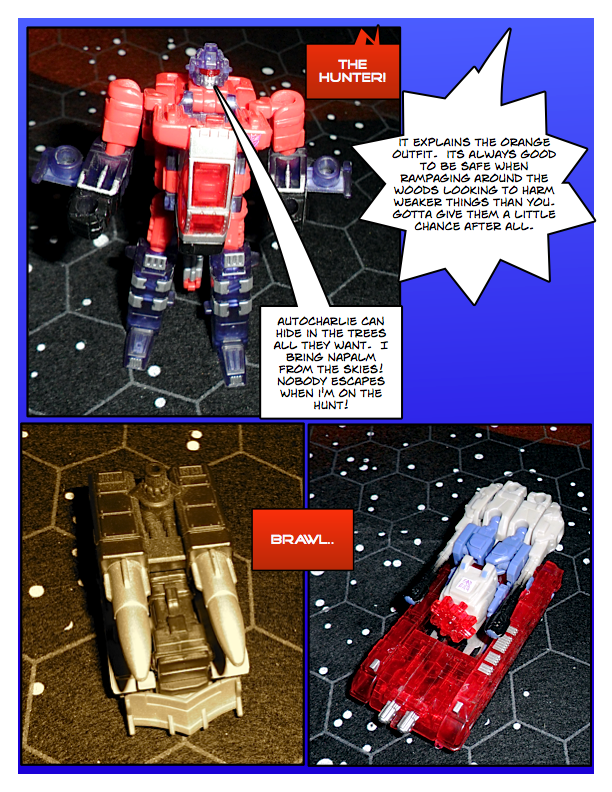 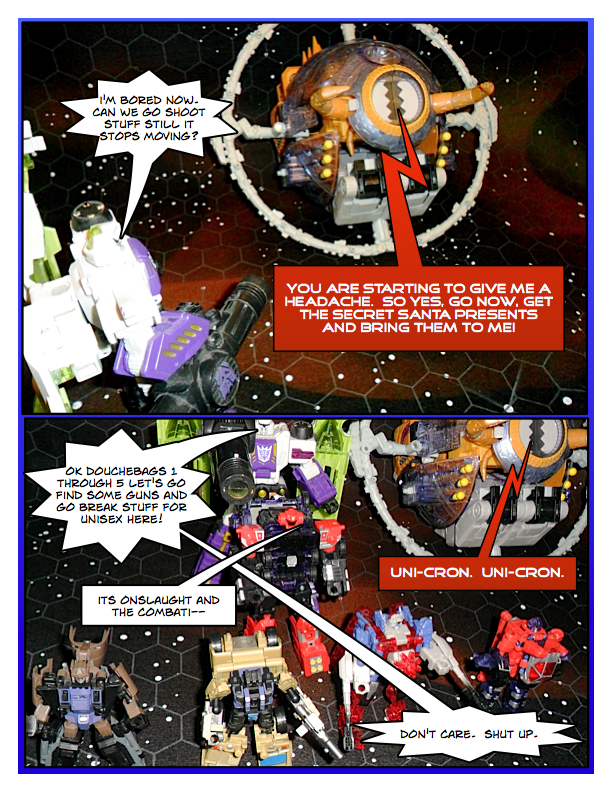 The comic is taking on a life of its own.  But I feel the need to let the story flow naturally as opposed to just speeding along with it.  There is another present to show, and this tale will take as long as it needs to.  It will probably just move over to the Atari 8 bit stuff eventually as I have plans.  But this specific story will go as it needs to.
Posted by Captain Rufus at Thursday, December 29, 2011 No comments:

This one is 95% informative as opposed to comic book silly toy fun.  Its more a part of the Let's Experience Atari bit than it is Toyniverse.  If you wanted to see toys behaving badly wait till part 3. 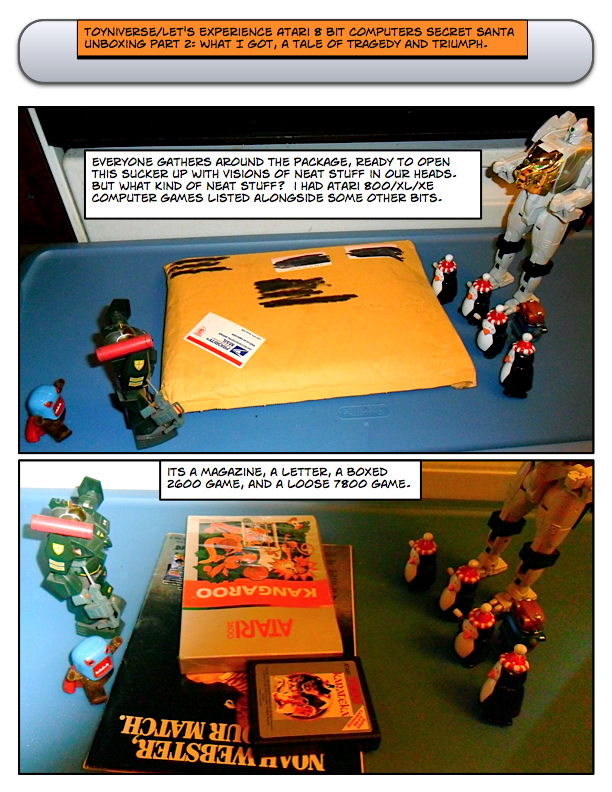 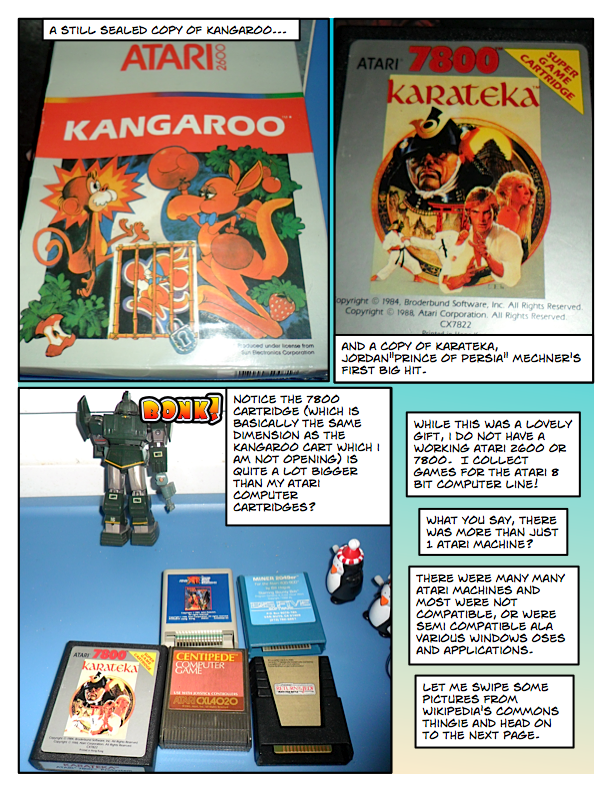 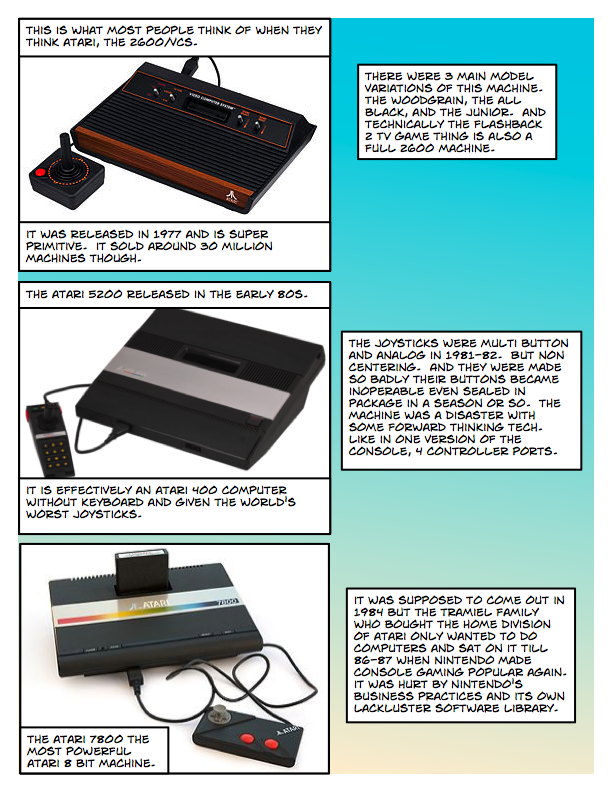 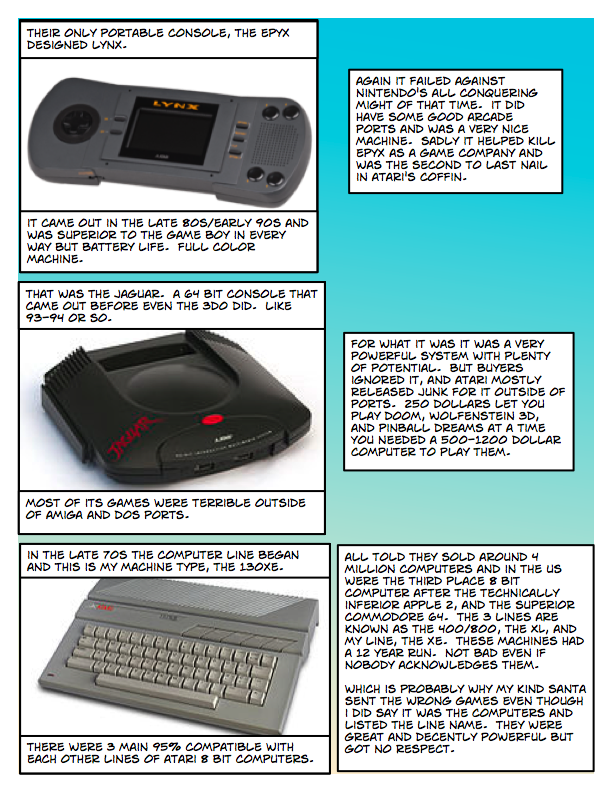 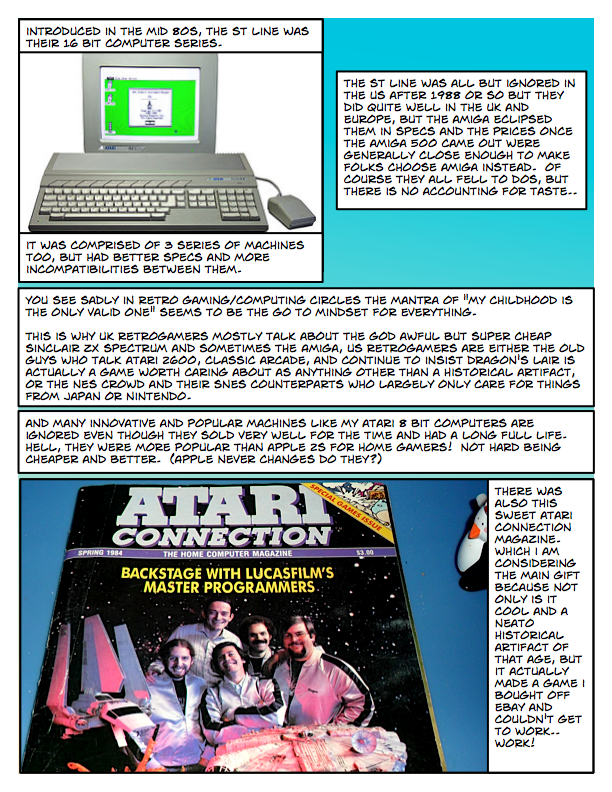 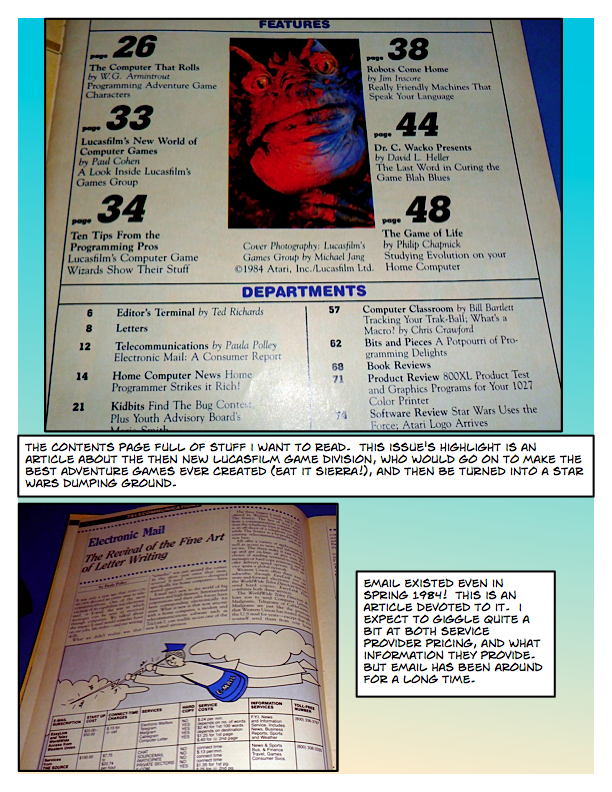 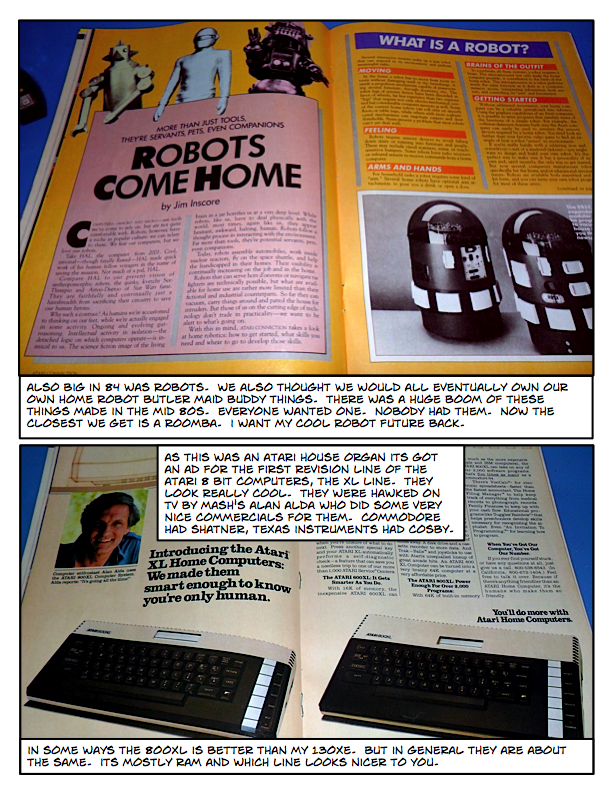 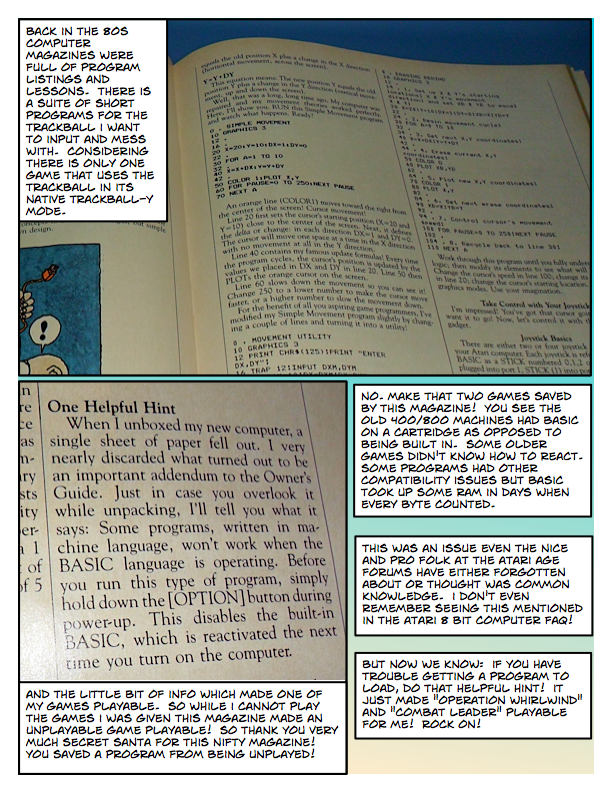 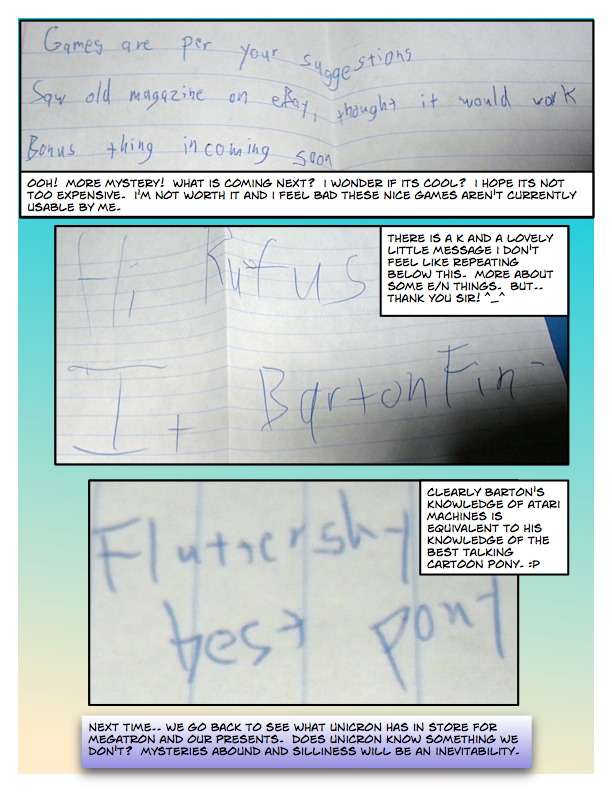 Oh yeah in case it wasn't clear: The pictures of the Atari machines in this installment came from Wikipedia and all looked to be under the Creative Commons License.   Because I don't own most of them and the ones I do are either broken, semi broken, under piles of stuff while being semi broken, or yellowed with age.
Posted by Captain Rufus at Sunday, December 25, 2011 No comments:

Its the holidays.  Holidays suck for me.  I did a Secret Santa thing on a very nice site full of lovely crazy people.  Here is my ridiculous unboxing comic that also ties into my long running Toyniverse Plot comic strip I have on a different site. 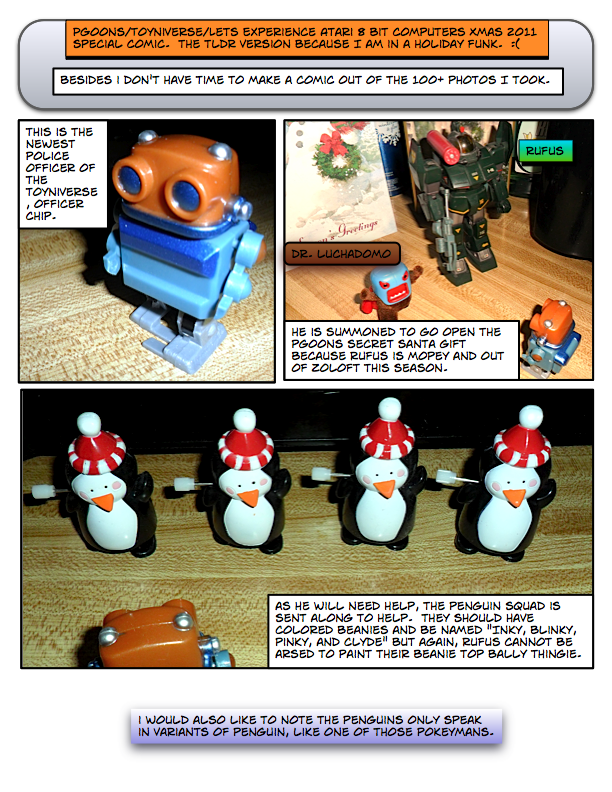 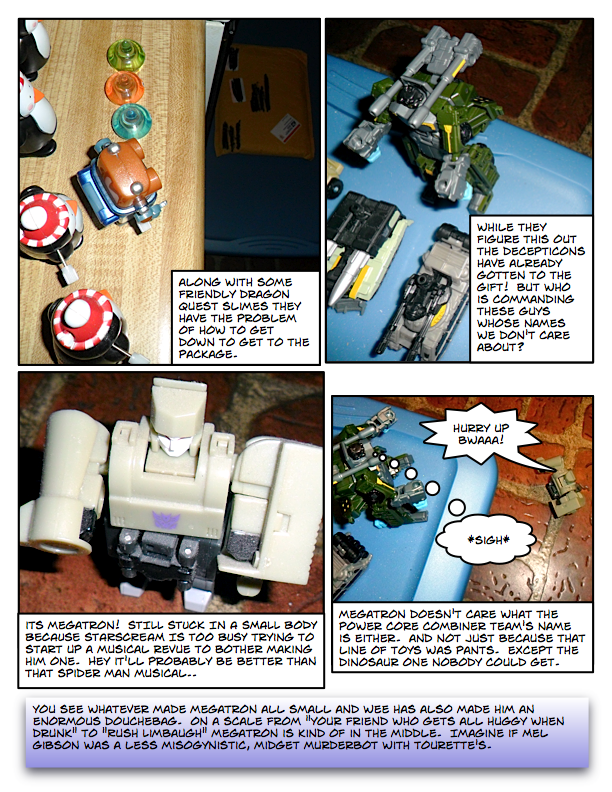 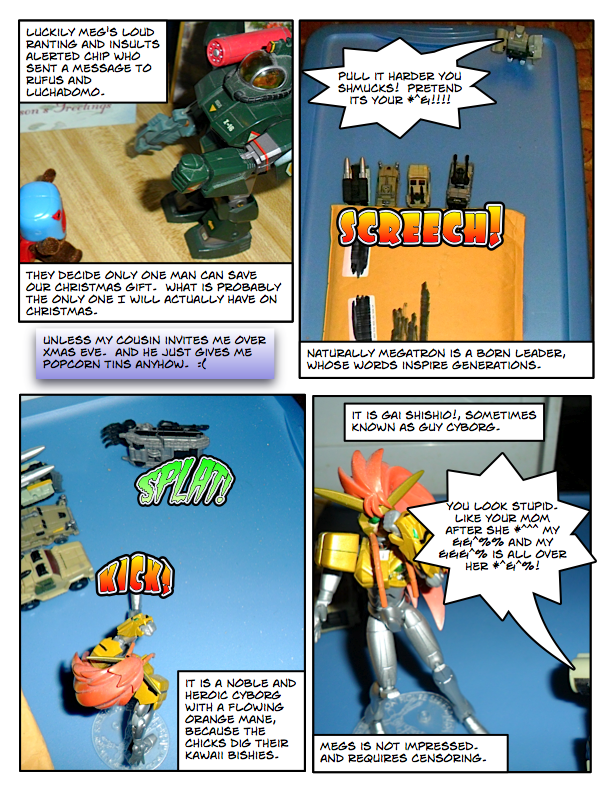 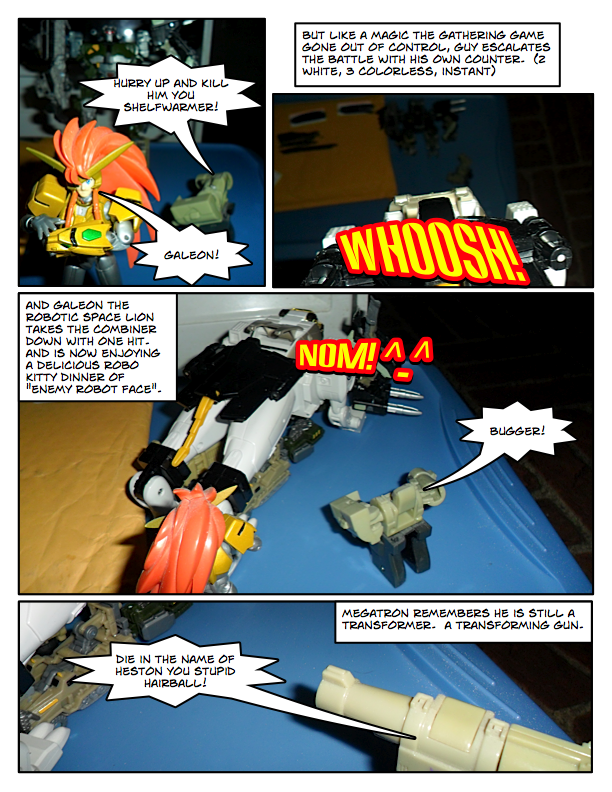 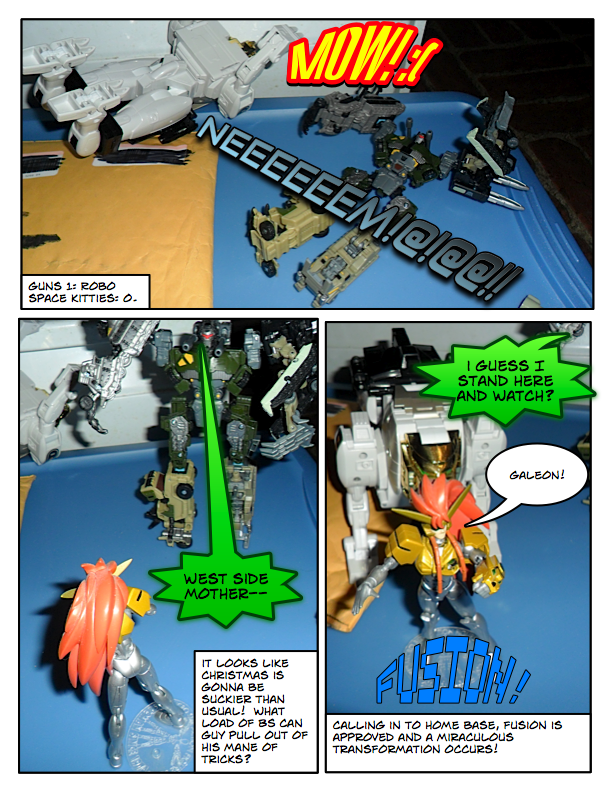 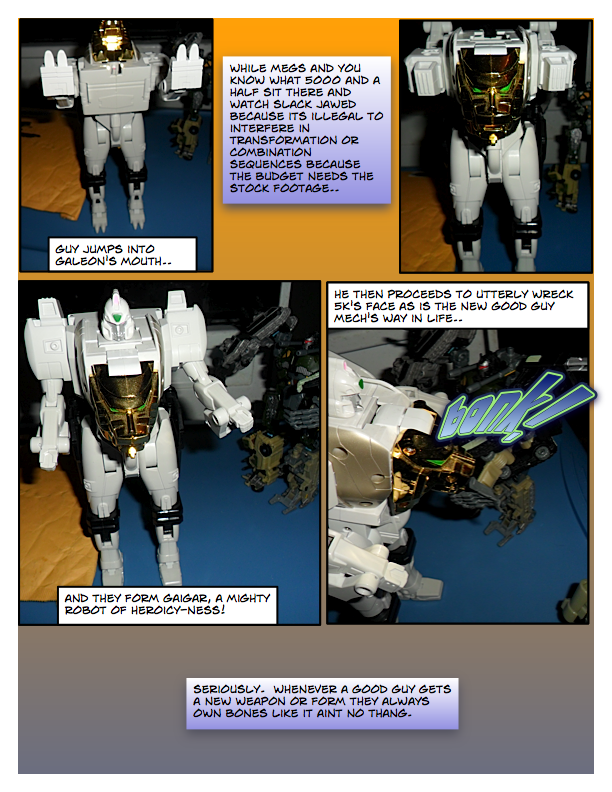 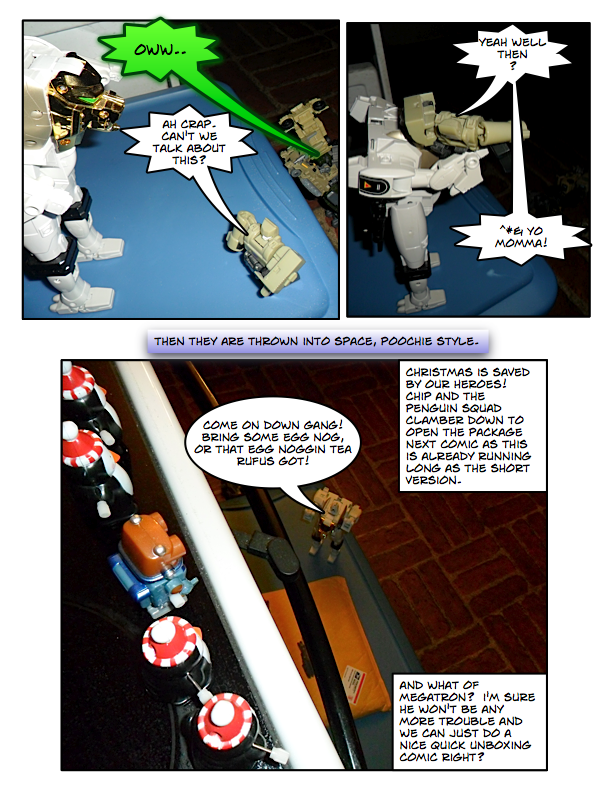 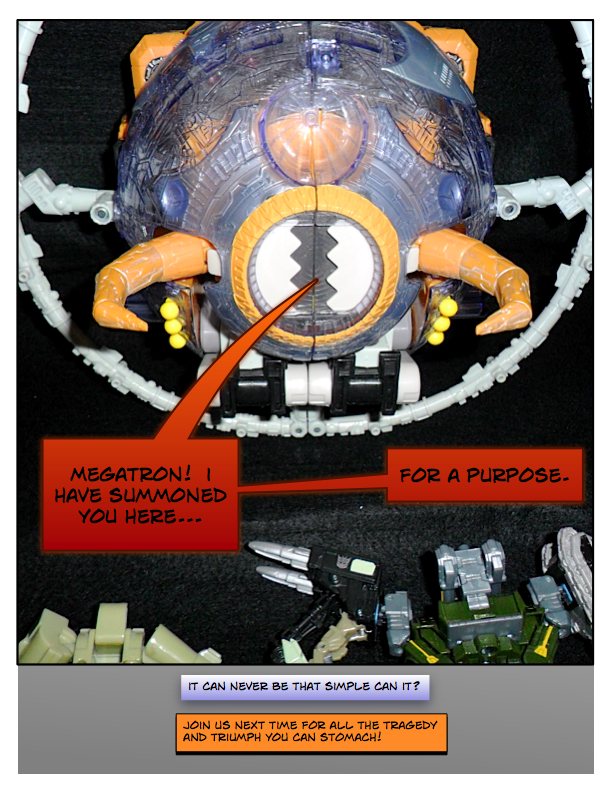 Posted by Captain Rufus at Saturday, December 24, 2011 No comments:

This has been long coming as I have been lazy and playing Fallout New Vegas.  However work has been going on behind the scenes.

Sadly the place I get my emulated versions of does not have an image of DOS so its screenshots from the monitor.  Don't worry its pretty minor. 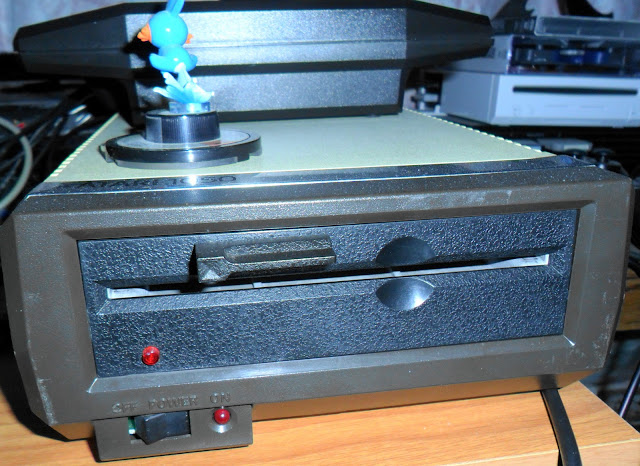 As we have seen in my intro comic here is our Atari 1050 5 1/4 enhanced density single sided floppy drive that also needs its own power plug.  There was a further revision of the 5 1/4 drive family but its much rarer even if its design is more in tune with my XE series computer.  You flip the power switch in the lower left hand corner on.  The activity light above it comes on and will go out in under 10 seconds.

You turn the drive on BEFORE you turn the computer on.  It is important.

We then are going to pop in Atari DOS.  In our case the best official option, DOS 2.5.  There are later versions and optional 3rd party versions and even drive mod kits you can get.  But we are going traditional.  As I may have mentioned you can using single or double density disks in the drive and you have to notch each side you want to write to, flipping the diskette over.  The seller had already made a backup copy of DOS 2.5 and we will use it, keeping the original from wear and tear. 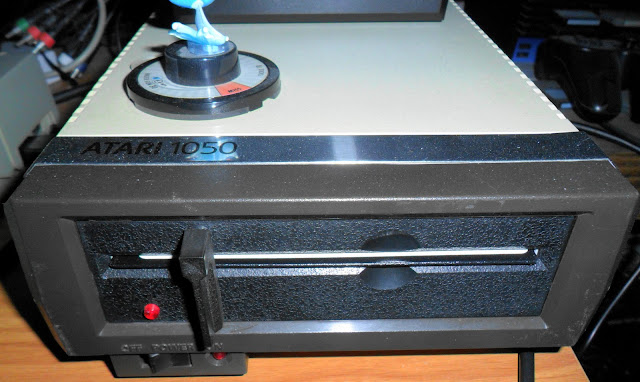 Once we pop the disk in and it locks, we turn the little lever down and the activity light pops on for a moment, letting us know if the disk is in general ok and ready to be used.  Once it turns off, we can then switch on the computer and our disk autoboots if its an Atari formatted disk with an autobooting program of some kind.  Like a DOS.sys disk or a game. 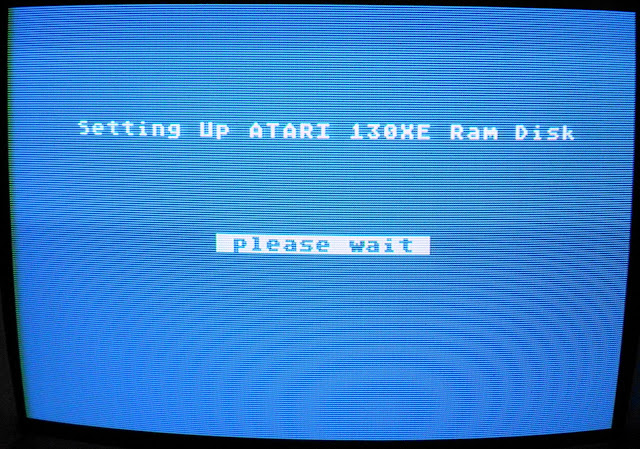 As I have a 128K system (hence the name 130xe, its little brother being the 65xe) it sets me up a 64K RAM disk as I boot to speed up operations.  Which is handy for programming or making disk procedures a bit snappier.  A second disk drive is even more useful though.  But one of those will run me a good 50 bucks or so right now.  More than I am willing to pay when for about twice that I can have an SD Card solution which loads ultra fast and won't require increasingly old and fragile magnetic disks or put wear and tear on equally old disk drives with motors and ancient belts. 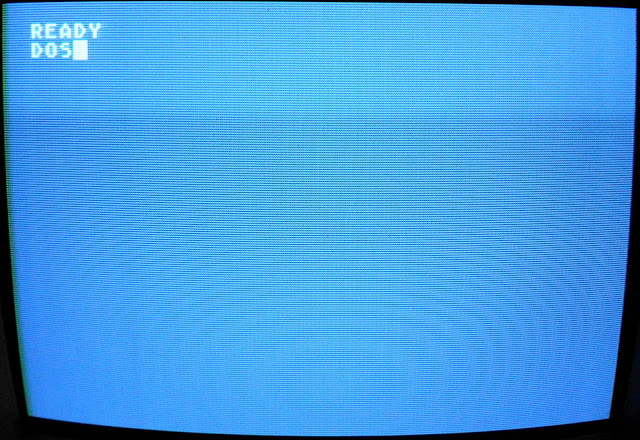 In way less than a minute DOS and the RAM Disk is ready to go and we are at our Basic prompt.  Typing the letters above brings us to the DOS menu. 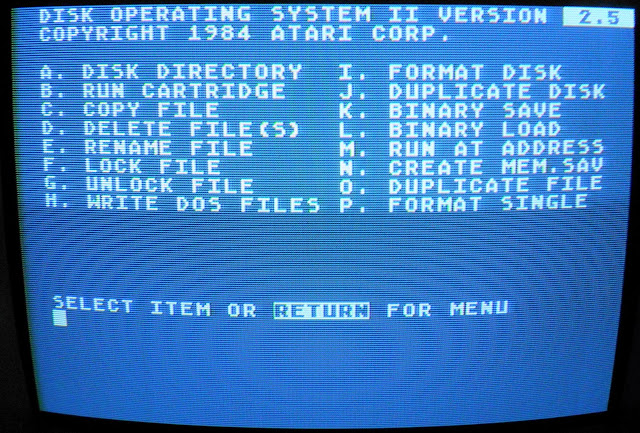 And now we have our DOS prompt with all your options, most of which and the selections afterwards being really simple and self explanatory, with more info in the Drive/DOS book.  K and L are for hardcore programming bits.  A disk format takes about 2 minutes, and Duplicate Disk sadly shows that all my working floppy disk games have copy protection so I can't make nice working backups and am forced to use my live disks.  Which frightens me.   But remember this is the 2.5 DOS.  In 1984.  Its already more advanced than what the Commodore, Apple 2, or MSDOS machines had to work with.  Commands in a nice menu system all ready to go.

My only issue is that instead of showing bytes or kilobytes of disk space it uses sectors.  And our enhanced density is 999 a side.  Its like Microsoft Points math but 21 years early!

As to other disk games?  In general they load pretty quick, from 30 seconds to around 2 or so though some titles have multi loads where one bit loads, reach a menu, something else has to load.  But its not so much the Atari's fault.  Most of the Atari software only needed 8K till like 82, 16-32K in 83, and 48K for the rest of the system's lifespan.  There were games and apps that needed more or less during these timeframes but in general developers always coded for the lowest machine because there were more of said machines sold.  Obviously more RAM equals faster loading (once the initial boot was complete anyhow.  Kind of.), more complex games, and better looking games.

Officially these are the number of titles using each level of RAM according to Mobygames and the 726 listed titles they have on record, 299 of which have their RAM requirements recorded:

Its a pretty wild array, with 48K being the most popular, and 16K the second most.  The Atari machines had a variety of different RAM builds with 2 active machines for each of the 3 lines (well 3 in the final if you count the XEGS which had the same RAM as the 65XE) and some easier to install more than others.

The original 800 and 400 had 8K each (400 originally intended to have 4 but RAM came down in price) with the 800 having slots for more RAM and eventually being shipped with 48K by the end of that line's life.  The 400s eventually came with 16K options and Atari Service Centers could even bring them up to 48K as well.  (Though the 800 with its better keyboard and plug n play memory and monitor outputs was still the more expensive albeit more desirable choice.)

The XL series had 16K for the 600XL, 64K for the 800XL, and 64 for the 1200XL which was quickly phased out due to massive incompatibilities with older software.  (The X00s still had some incompatibilities but not as many and a Translator Disk could fix some of them.  The XEs have the same issue.  I may have run into 2 titles already that aren't listed as incompatible that are.  As is I can't buy GORF or Demon Attack until I foot up for an original X00 series machine.  I may have found a place to get one cheap though.  We will get to that when we can.)   What is kind of funny is the 600XL while missing some of the output and port options of the 800XL can actually have MORE RAM than its big brother.  A 64K memory expander was made for it that does not work with the 800.  So it can reach 80K while the 800XL cannot!  (There was a plan for memory packs for it and a box to hold multiple expansions that never came out.  Atari was BIG in the early 80s for coming up with cool kit that never made it out of prototype stages.)

We can sort of see why lower RAM amounts were used and even why 64K wasn't that common.  When most of your customer base has a lower spec machine you want to go for them so you get the widest possible base of people capable and willing to buy your product.

Heck, even the 810, and 1050 drives weren't all that common for a while, with users, especially those poor European folk settling for cassette drives.  (The 410 and 1010 being Atari's drives.  Most European computers till the 16 bit era used tapes as defaults and most of the software is available as such.  When it even was available on disk the price was usually 50% greater.  A 10 Pounds Sterling Commodore 64 game on tape was 15 pounds on disk.  Or going by the rough 1 Pound to 1.50 US Dollars we see a 15 dollar tape game or the same game on disk for 22.50, ignoring inflation.  Keep in mind floppy drives cost an insane amount, usually 2-3 times the cost of the machine and its easy to see why Europe just dealt with the 10-20 minutes most tape programs took to load and all the hassles tape brought with it.)

This is why so much software was available on cartridge, especially from Atari itself.  From a collector's standpoint this is pretty awesome though.  You could just buy the main machine and grab one of your Atari 2600 controllers, hook it to your TV, and still have plenty of games to play back in the day.  And now.  Plus given that cartridges are VERY durable and the worst even old ones need is a quick cleaning you have a machine that will be fun out of the box and less worry for the durability of all the moving parts in a floppy drive and the equally if not moreso fragile magnetic floppy disks that can be damaged in dozens of ways.

Hell, I have Amiga and DOS PC 3.5 disks that died merely being stored in my bedroom!

This is another reason I chose the Atari 8 bits over going back to the machine of my youth, the mighty Commodore 64.  There was TONS of cartridge games released and no need for worrying about all the PAL and probably incompatible with a US machine anyhow tape games, or hunting down a working 1541/1571 Floppy Drive to run American games.  The C64 didn't have nearly the amount of cartridge games.  And unlike the C64's Europe only Game System version, the XEGS actually got a strong software release catalog on cartridge for it.  (And was actually a full bore computer instead of the stripped down thing Commodore made.  And came out in the actual 8 bit era and didn't try competing with the Genesis and SNES.)

The Atari was mainly a US system and was THE gamer's computer from around 1980-1984.  Its' games and popularity was usually the winner in Electronic Games magazine reader polls month after month.

Now we have gone through the main hardware I have at the moment (don't worry I have more to get!), we can get into collecting and controllers!
Posted by Captain Rufus at Friday, December 16, 2011 No comments: