[Retrocomputing: Why Bother?] Machalla IIsi: The Return of the Jederr... 68030

Yes friends Machalla has returned.   You see for a couple years now I have been slowly searching for the right condition Macintosh IIsi to replace my slow as all hell Macintosh Plus.

When we last left ABOUT TWO YEARS AGO:  http://wargamedork.blogspot.com/2016/02/retrocomputing-why-bother-machalla-part_5.html I was doing file nonsense and trying to get emulation to do me right.  And its been so long I forgot quite a bit of what I was doing.   Well fast forward to a week or two back and I was in the mood for a new/old game to play and a game I purchased cheap but that has a bad reputation got bought and put me in the mood for that genre.  I just so happened to have some of the installments on my Mac Plus.  But even ancient mid-late 80s games sometimes run like ass on it.  (That franchise is due for a collection post but this random 4 dollar game pick up has cost me money as I decided to just COMPLETE THE SERIES.  Because I am a dumb ass consumer whore moron!)

Good things happened!  See a Macintosh IIsi finally came up for a decent price and condition on Ebay.  Not a color monitor, and no mouse and keyboard but I had purchased both already when Something Awful goon Kthulhu5000 told me I should get a IIsi back then.  It was 67 dollars shipped and had a photo showing the machine at least semi operational but not with the OS actually fully booted.  But no big to me as I have my Floppy Emulator  anyhow and the IIsi is one of the last Macs to have the original old school floppy drive connector.  (Though the mouse and keyboard use Apple's ADB connector.)


As usual most images can be clicked for larger.  But before we see my new silly toy let us see what the old Mac Plus did again: 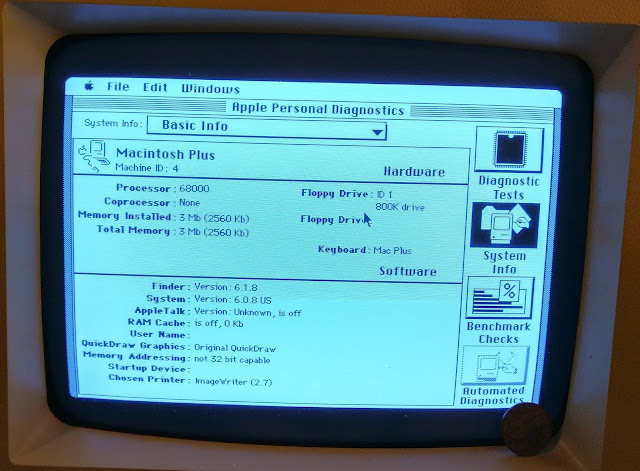 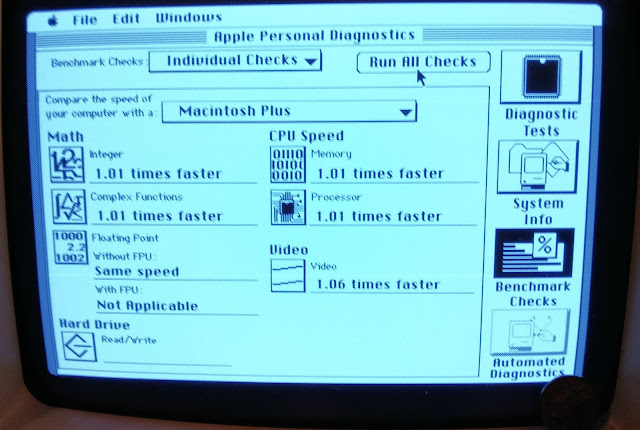 There is what our Mac Plus did, with a penny in the corner for size comparison. 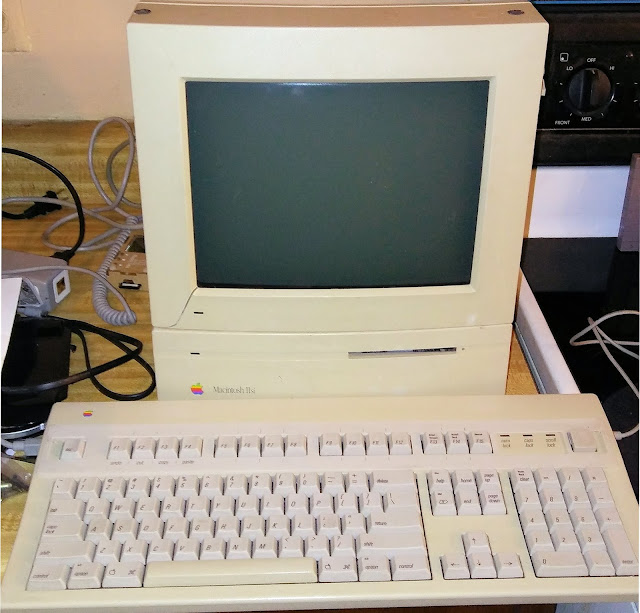 Well I don't quite remember if the monitor was cracked in the image the seller showed but given that it was less than half the going rate these machines tend to run on the Bay I don't care, especially as I am gonna replace it probably with a color monitor anyhow.  Even if these two devices look GREAT together as they were designed to be a pair.  Sadly they aren't as compact as the Plus but still pretty cute and wee overall.  The mouse is to the side and it plugs into the keyboard and the board is plugged into the machine. 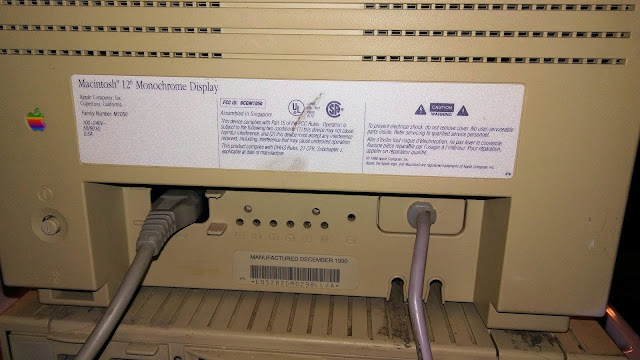 As we can see the machines are VERY dirty but not looking like they were in the dumpster.  They need and will get a good cleaning if not being modded with a nice spraypaint color scheme as they are old and I don't feel like "Retr0brighting" them.  One annoyance is the screen controls are tiny holes.  Probably requires a small screwdriver...

And the back of the machine itself!  One neato thing is the monitor's power cable plugs into the computer so they can be controlled as one unit, something a separate color screen won't do.  There is but a single ADB port and you plug the keyboard in and then a couple other peripherals can be plugged into the keyboard.  Unlike the oldest Macs this one has a wee fan.  It also has No Tool Opening and even the internals don't need tools to open up and remove most of it.  This Mac has an external SCSI port, plus Microphone and Speaker ports.  The rectangle is designed for the optional card that allows for "NuBus" cards.  I probably won't be bothering with such.

The keyboard as mentioned was bought years ago.  Its bloody big.  The button on the far right is a power button if you don't want to just push the little tiny button on the back which sometimes you have to use in case of a computer freeze thanks to a bug or whatever. 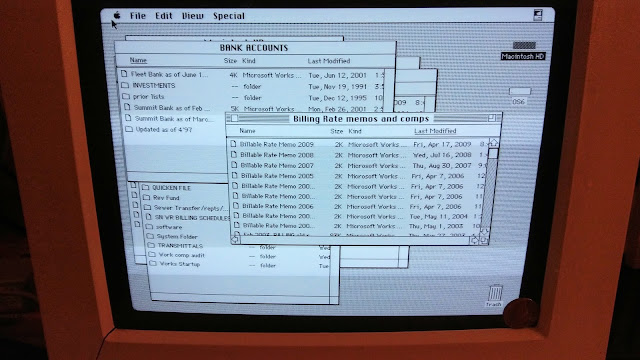 Turning it on it takes a bit for the first boot.  But the monitor and machine WORK.  And this was a working machine used to do working worky things.  And was being used as late as 2009, almost 20 years after it was first released for around 3000 bucks.  (The machine got closer to 5,000 complete.  And was MUCH cheaper by 1993 when it was discontinued.)

It will boot much faster after it fully loaded and got properly shut off which is something the seller could not do.  I also deleted all the business info stuff which I was gonna do even if the seller didn't ask me to.  I needed the space on its wee hard drive. 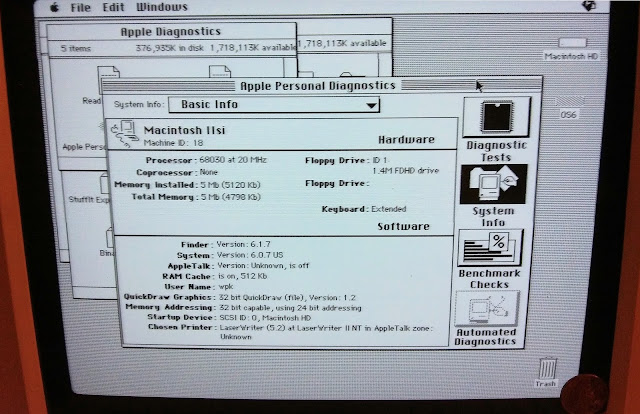 It is still using the retail released version of System 6, it is at least supposed to be patched to 6.0.8 but it clearly worked and was a good special boy for years and years.  20mhz, 1.44 floppy drive, 5 megabytes of ram.  You can see the penny in the lower corner by the Trash icon for scale comparison. 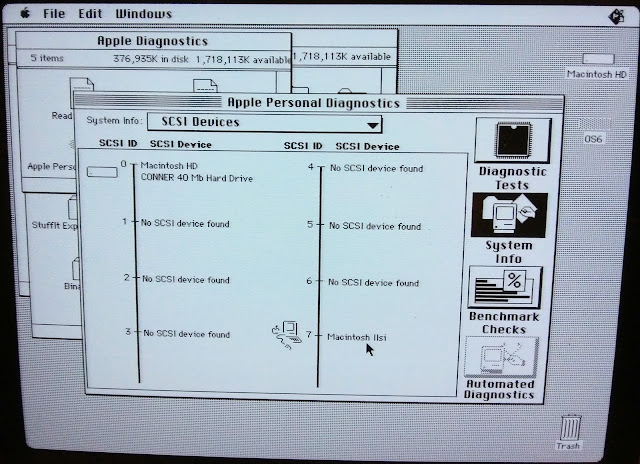 That hard drive is a JOKE in size.  40 or 80 megs were the options at the time and good gravy that was not remotely enough even in 90-93! 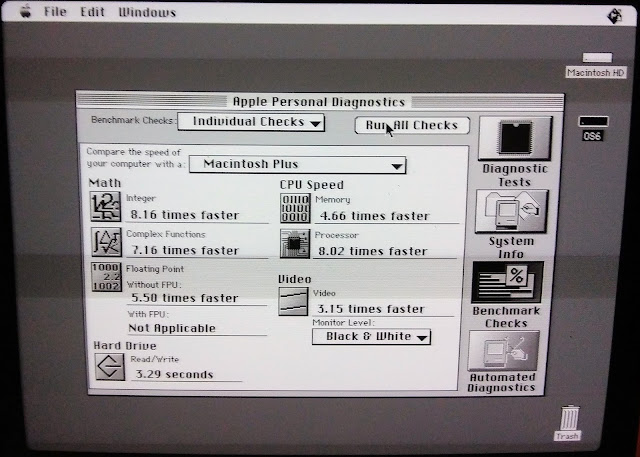 I can now enjoy a whopping 256 colors of grey scale over just pure black and white.  But in full black and white mode this is what my machine is rated at compared to the Plus.  You get slower ratings in 256 greyscale mode. 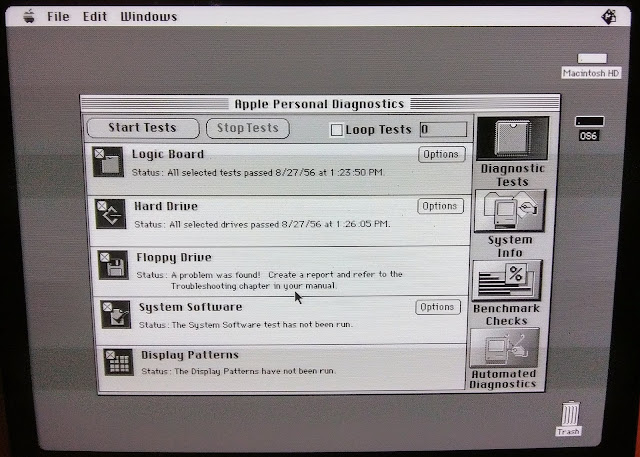 Sadly just like the Plus and ALMOST EVERY BLOODY COMPUTER WITH ANY FORM OF 3.5 INCH FLOPPY DRIVE AAAAAAARHFGJKLNDLK:JNGDF:LKNDFGL:KNDG the floppy drive isn't working correctly.  But maybe I can clean it.  Not that I really need it with the Floppy Emu and hard disk. 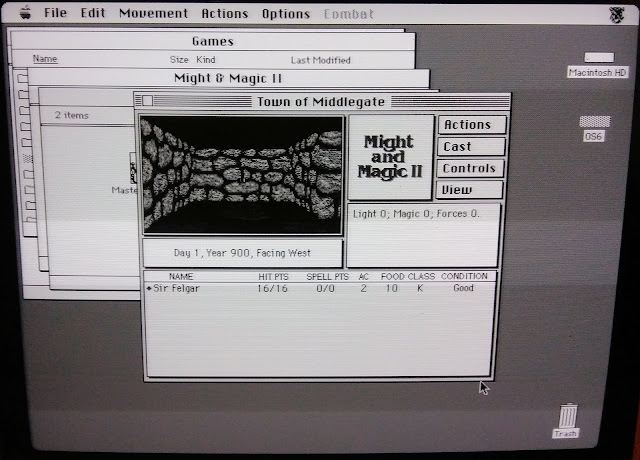 In greyscale mode this is what Might and Magic 2 looks like.  Though it is intended for a color monitor. 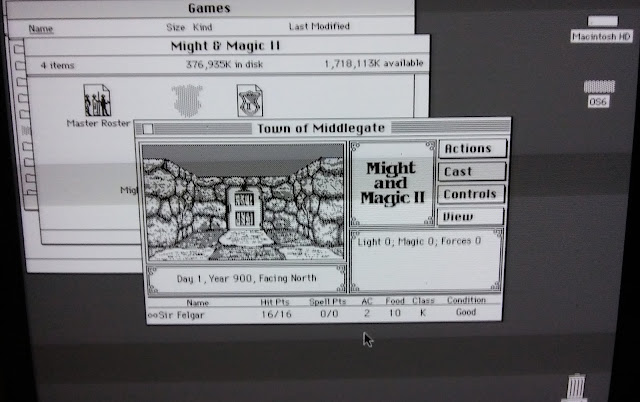 And black and white mode.  Not as pretty but everything is clear. 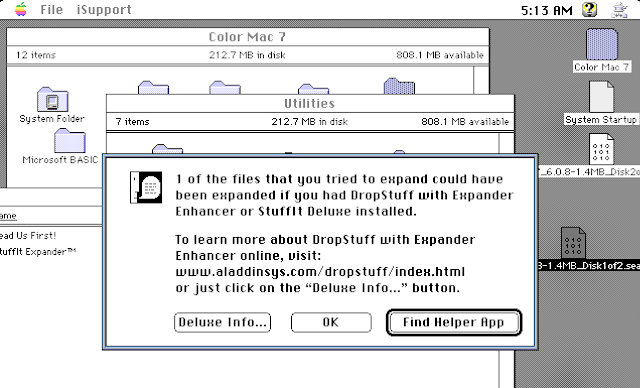 Now I try to set up the 6.0.8 upgrade as for reasons we will see the 7.5.x OS is too space hoggy for my machine in both RAM and HD space plus me not wanting to be a dumbass and maybe messing up the hard disk by dropping my Color Mac II 7.5.3 hard disk image over.  If it aint broke don't fix it yes?  But as we see it is not working.  Like the shark from Jaws. 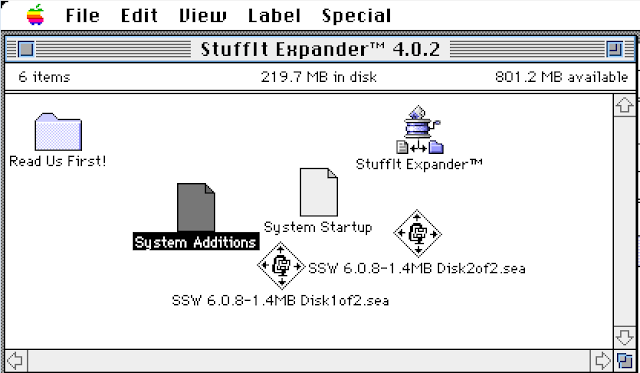 Oddly enough it might have properly expanded in an older version of Stuffit that I have as the newer version that doesn't run in OS 6.0.7 works.  But it is a weird file that may or may not work with my floppy emulator.  I haven't had time to check yet.  (By check I mean make the Floppy Emu play nice with it's menus.)

Yet we need to upgrade the machine if it is cheap. 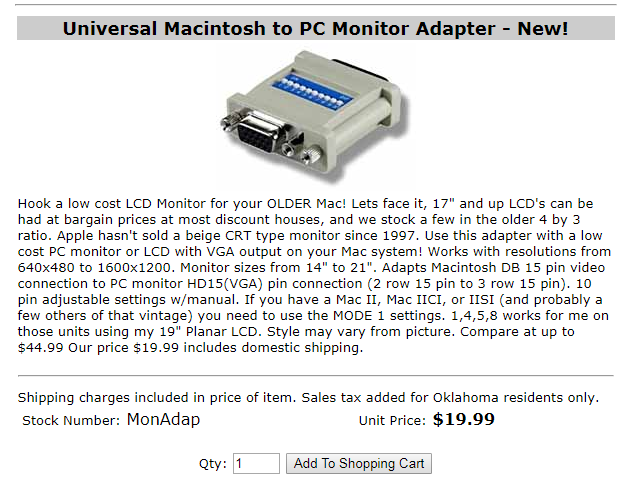 This doohickey will let me use new or PC monitors I have hanging around or if I replace my 22" main PC screen with say a 27" or something silly like that.  With the correct DIP switch settings. 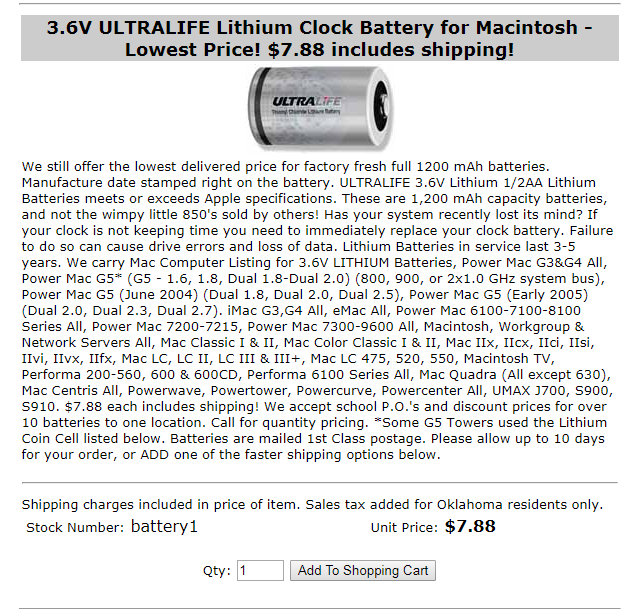 You want to keep the clock and settings going?  Gonna need a clock battery!

And one needs to cram that RAM.  1 megabyte of slow ass RAM is onboard.  You have to replace all four of the RAM slots with the same RAM to get more.  So 4 megs of RAM plus the onboard or put 16 in it?  Look into your heart.  You know what must be done.  (Hunt down the 16 meg chips and go for 65 total megs!  Ok that's pretty silly but I would be lying if I haven't done a light search for them.)


But thanks to the UWU CREW I found cheaper solutions that might be already nerd tested, geek approved: 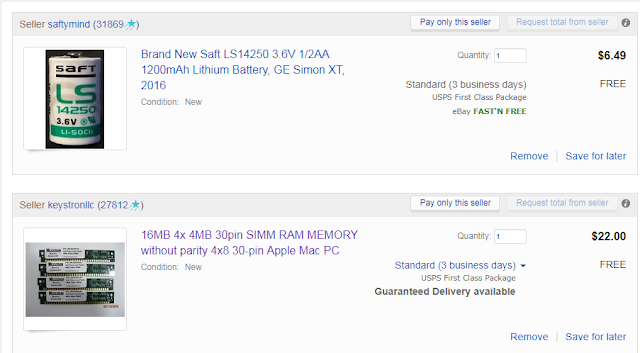 A little careful budgeting because BILLS AND REAL LIFE ALWAYS COME FIRST OVER DORK STUFF and now 3/5ths of my most essential upgrades are on their way to me.   I am gonna need to open up the case to at least give the top a VERY thorough scrubbing until it gets warm enough for me to decide if I am going to spraypaint the machine or not.    The monitor also depends on if I keep using it or go with a Color VGA CRT or maybe even said 22" LCD and make that an excuse to pop a larger screen onto this main PC. Taking a shot though I set up the Mac 7 HD image to see if it will run and boot.  (Yes technically it is already there for those with good eyes.  But you can set which disk to start up off of.  So it stands!) 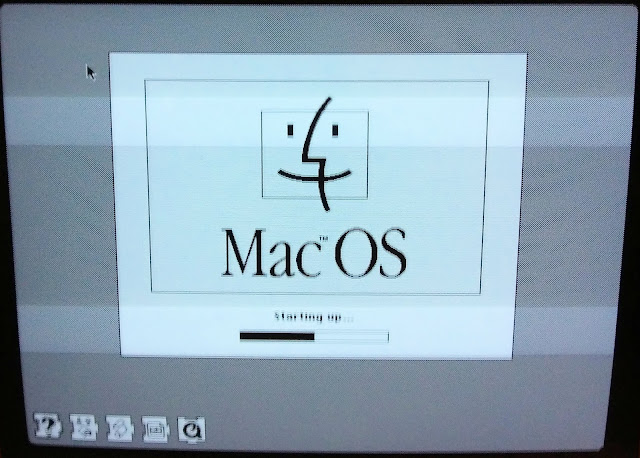 The booting up from the floppy drive emulator is SLOW.  Like 3-5 minutes compared to the sub minute or so of the internal SCSI drive. 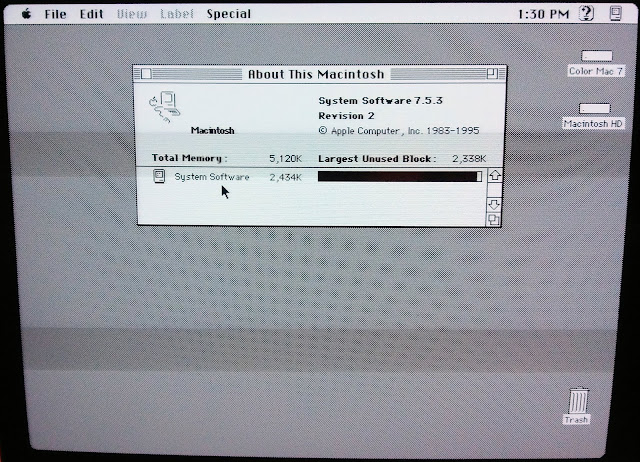 But.. it WORKS.  It just eats up about half of my available RAM even if the performance benchmarks (not shown thanks to a fuzzy image) actually improve a bit.  Tighter coding?  Possibly!

So what is next?  Well the deep cleaning if not custom paint job is a high priority.  Making sure those new components work out.  Then I have two more things to do, one of which involves soldering and desoldering a single component off the motherboard for a new one that is around 25 bucks but will increase performance by a very decent amount.  The other involves a roughly 70 dollar component that also will increase overall performance and hard disk space but without the risk of me screwing up a 28 year old computer and will even allow for some leeway in what I can experiment with.

Machalla IIsi is just beginning!  WITNESS MY DORK ASS TURTLENECKED AND SOMETHING ELSE MAC USER STEREOTYPICAL...

Posted by Captain Rufus at Thursday, March 22, 2018 No comments: