A One Year Wargame Dork Retrospective, or "My Life With the Friendship Cult"

This space coming soon once I have time to write it up properly.  Until then, enjoy this picture that sort of sums up part of this post far better than mere words:

Also if you are looking for my Atari computer stuff and NOT toys behaving badly, the start of that project begins at http://wargamedork.blogspot.com/2011/11/lets-play-party-like-its-1987-lets.html
so please enjoy yourself and see how I in fact seem unable to get out of the 80s.

Posted by Captain Rufus at Monday, January 30, 2012 No comments:

Now THIS is why Indies Gaming owns!

An upcoming Dungeon Master/Eye of the Beholder styled first person RPG (I am kind of hoping its turn based but who knows?) called Legend of Grimrock got an interface question from someone with a disability who still loves these sorts of games.

Instead of ignoring him or just giving some BS excuse why something simple couldn't be done the developer PUT IT IN THE GAME.  Probably was a sub 1 hour project for art and coding, maybe 4 at the highest possible.  (I am not a coder but it seems like it would be something super simple considering a game made in 1987 on a 7mhz 512K Atari ST had it in there..)

This is what I like seeing game developers doing.  Not ignoring their customers or giving them excuses but doing things the customer wants.  To be sure you can't please everyone always but if its something simple that will help your audience and give them what they might like?  Why not do it?

Now if we can just get Steve Jackson Games to figure this one out instead of any time any one who ISN'T a Munchkin customer (who probably don't post to Internet boards anyhow..) complaining about or asking for something getting their PR guy posting HOW IT IS.

Sometimes you have to go an extra few inches and you will get MILES out of your customers.
Posted by Captain Rufus at Thursday, January 26, 2012 1 comment:

Since Everyone Else is Doing it: My Thoughts on D&D 5th

Umm.. its too goddanged early to tell?  We know nothing about mechanics, what sacred cows stay, which ones leave, which ones come back.  All we know is that its coming, probably 12-24 months out (a reasonable timeframe from 4th's release) and they will involve the community in sculpting the rules.

Will it satisfy everyone?  Doubtful.  Different people want different things out of D&D and its IMPOSSIBLE to make everyone happy.  Some of the old schoolers have mostly spent the last 5 years or so shoving every stupid, moronic, unbalanced, inelegant, and unfun rule Gary Gygax came up with right up their asses and making them holy and sacred when in general more people tended to think most of them were stupid.

Hell, most of us thought most of them were stupid well before WOTC or even 2nd edition got started.

Heck, just look at classic 80s computer RPGs.  Most of them were blatant D&D ripoffs and most of them threw out much of the stupid, or as much as they could get away with.

Of course the old schoolers won't accept this to the point they rage on 2nd edition AD&D which is 1st edition with most of the major complaints eased back to a more sane, reasonable level with the stuff few people really used turned into OPTIONS, usually in a nice boxout in case you wanted to use it

Then 3rd fixed most of what people hated in Gygaxian D&D while putting in their own levels of stupidity and overdesigning it.

Then 4th tried to fix the core of D&D and turned it into something that didn't feel like the previous 30+ years of D&D did while being fun on a different level.

But it was so different the Old School and the 3.x fans alike could only agree they disliked it, with the fans of it mostly screaming GROOOOGNNAAAAARRDDDS!  IT IS WE WHO ARE THE FUNHAVERS YOUR GAME WAS NEVER FUN EVER EVER EVER!!  and thus turning the D&D discussion universe into a morass of divided opinions, brandwhoring, and outright silliness.

Can 5th bring these people back into the fold?

Doubtful.  It will probably sell well and at least be a sales shot in the arm for the D&D division but even if they take the time to listen to everyone there is no way they can please all.

When even the old schoolers can't agree which edition they like or what was good and bad, what chance does WOTC which has corporate influence to deal with and a bottom line of profit to keep up?

But... WOTC is trying.  They aren't speaking from On High as they did with 4th which sent many people away and gave Paizo an opening to become the 2nd place RPG company.  They want to make something people can use and buy product for if they wish, possibly not overloading a new player, but still providing a way to get steady sales on new product for years,.

So ultimately I am optimistic for both the online RPG community and D&D but right now it is entirely too soon to tell.  Maybe we will know more in 6 months or so...
Posted by Captain Rufus at Thursday, January 12, 2012 No comments:

Email ThisBlogThis!Share to TwitterShare to FacebookShare to Pinterest
Labels: Dungeons and Dragons, RPG

My storyline has gotten large and out of control.  It continues.  Imma try to finish this specific storyline in 1 more installment but it might take 2 depending on how large it gets. 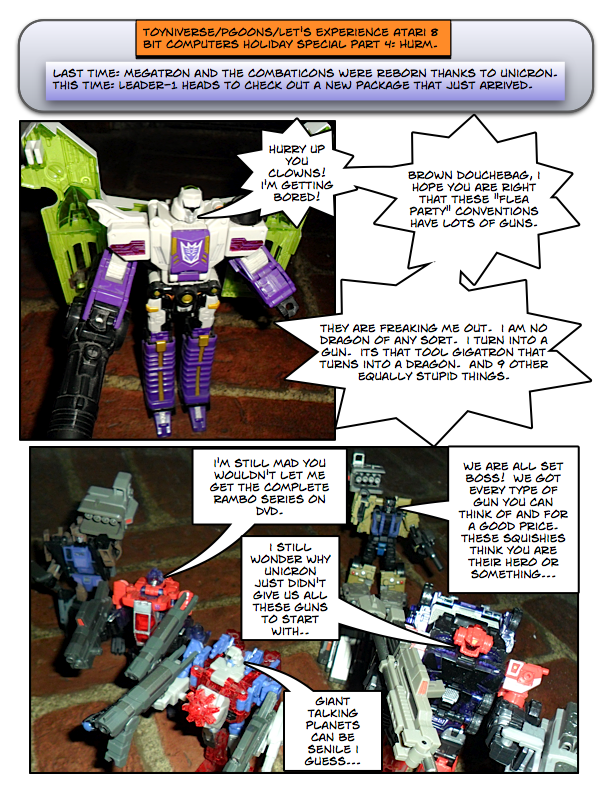 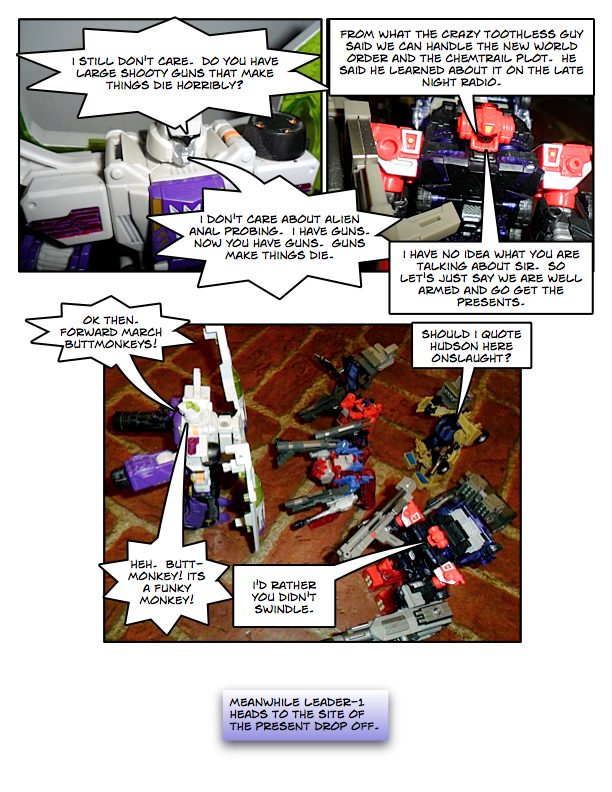 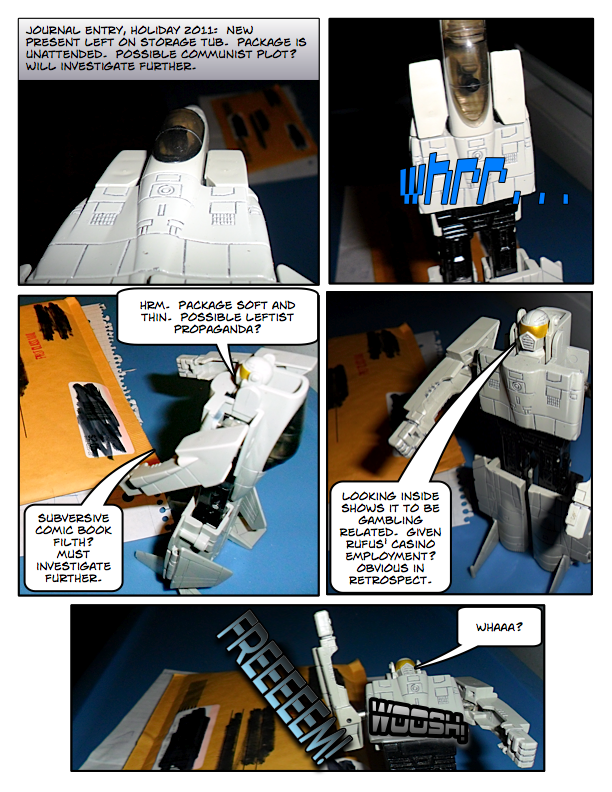 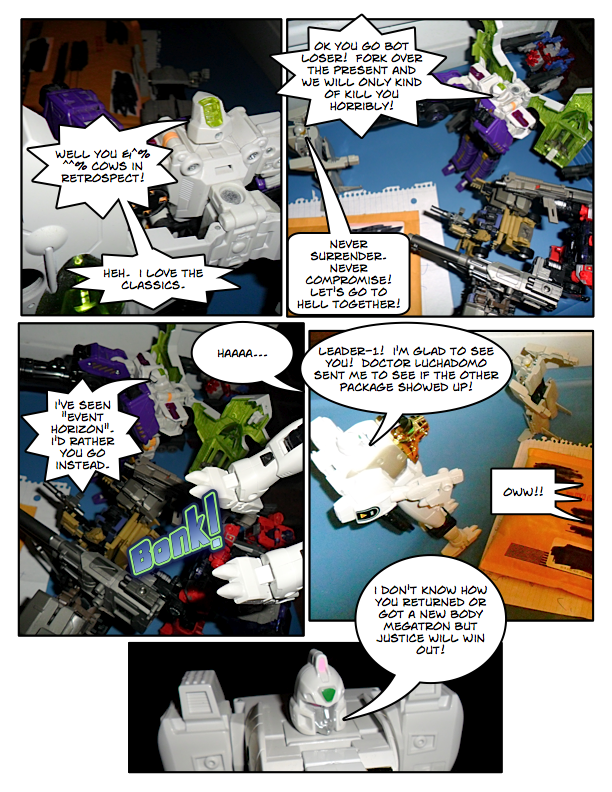 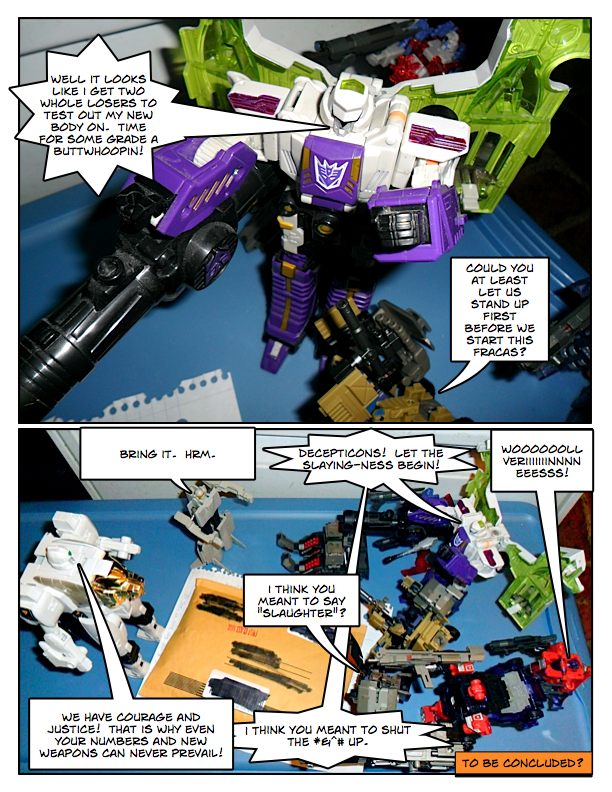 The one thing with doing these is I keep finding things in my house that need cleaning.  My camera has better vision than I do.  After this installment I got out the Magic Erasers and went to town.  I've even gone out and bought more.  So if nothing else doing comics helps me find dirty things in my house that annoy me to the point I just HAVE to clean it.
Posted by Captain Rufus at Sunday, January 08, 2012 2 comments:

What This Toyniverse Secret Santa Unboxing is From, a Quick Guide

For the tiny amount of my readership that might actually care.

See there is this adorably fun show I started watching thanks to both Something Awful (see sometimes they can be more than just obnoxiously smug, making you want to punch them in the groin even when right like a Internet Forum version of Bill Maher!) and some of the other nerd places I visit about the net who had said positive things.

This community is full of wonderful, nice, and fun people who are crazy in the Howling Mad Murdock way and not the Buffalo Bill sort of way.  So one fellow decided to organize a Secret Santa thing with wish lists and he did all the hard work of matching people up and giving emails with the addresses and keeping track of who was going to who and locations based on willingness to ship overseas and whatnot.

It was quite fun even if my gifter sort of only half read my list.  (He insisted on trying to fix it but its really the thought that counts and the magazine made 2 unplayable games playable so yay there.  It shows how much I suck that it was pretty much the ONLY gift I got this year, as both my parents are deceased, one friend failed to get anything out on time, and my sister bought me dinner.)

But we end this little background info nobody cares about with a picture (from the person I was chosen to gift to and is on their hosting so if in a couple months the picture is not there they took it down) showing what cool stuff I sent, which was a mixture of goodies I bought because it seemed fun, sealed extras of things I had in the house, and from the wishlist itself.

Plus its my way of potentially creating a new hobby gamer since the giftee mentioned needing a charger to play an RPG on the PSP.  (Which sadly I forgot to remove the price tag from.  DOH!)  It might not work, but sometimes nice introductory gaming goodies as part of a gift to someone might help make a new gamer. Am I awesome or what?  Car Wars starter books, a mini wargame, some RPG magazines, and dice among other goodies.  (Some of the dice and a couple Lego figures are hiding in the coffin.  I love those little metal coffins Target has had the last 2 Halloweens.  They make great dice and figure transports!)  Also note my cool ass tea aged letter done in the form of a Warhammer 40K universe thing.
Posted by Captain Rufus at Wednesday, January 04, 2012 No comments: