[Let's Play] Party Like its 1987! Let's Experience the Atari Computer! Part 3: Basic and System Self Test


Just a video this time, taken from the Altirra emulator.  I almost did a comic version but here I think the video and the few captions I added do a good enough job.  I like the fact the machine has a self test so you can check some basic things out yourself.  Provided its working enough to turn on mind you.

Well we are back with our second installment, this time with some options for video.  As I say in the comic installment, photos were taken of a 13" 80s monitor and a modern 32" HDTV.  Results are close to in person but not 100%.  But its the best I can do and it is really the only way to show the differences in output.

An emulator certainly wouldn't and I doubt a capture card would either.  Plus my modern computers and the Atari are at least 15' away and it would be unfeasible to run cables anyhow.

(Remember this fact as it WILL come up in this project later on.  Certain hardware solutions elude me because of this.  I simply do not have the workspace to run the Atari next to the PC or the Mac unless I wanted one of my modern computers to go where the Atari is, which then means moving a screen to the floor any time I want to watch TV on a TV.  Or play modern consoles.  Its easy enough to move the monitor you will soon see but its small and wee.  Putting an imac on the floor not so much!) 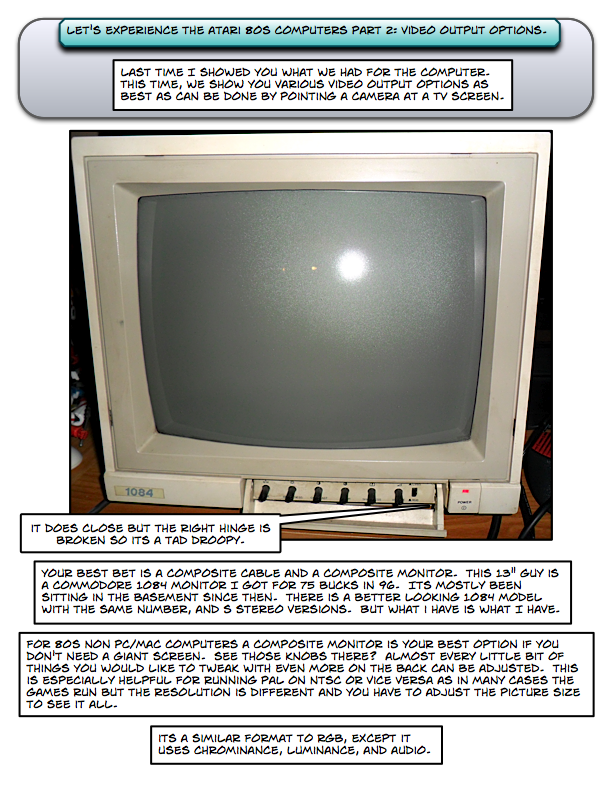 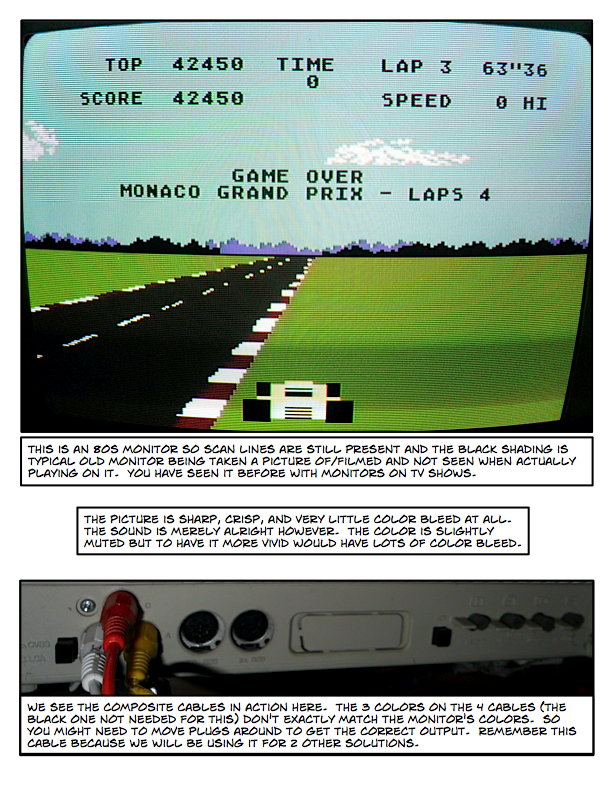 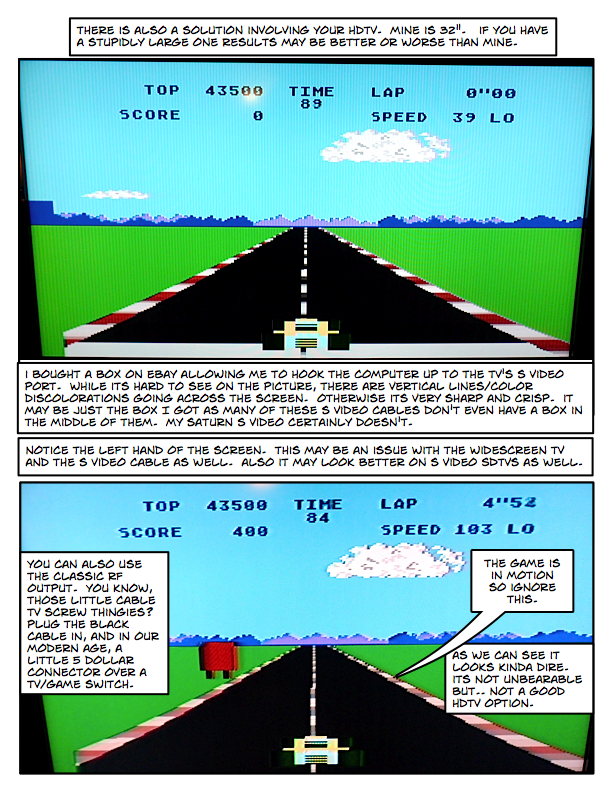 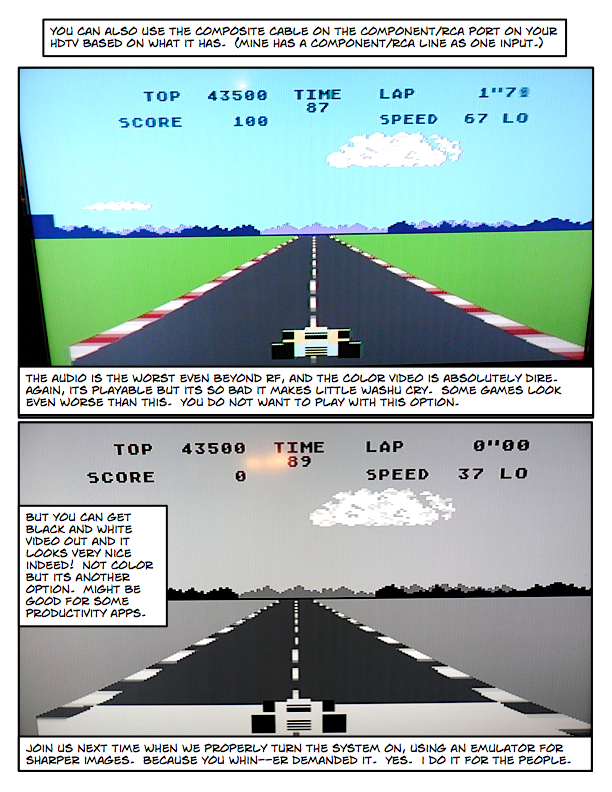 Another couple options we could have tried:
(As both of these will become increasingly irrelevant over the next few years I am merely mentioning them for completeness sake though I may go back and try them out later for laughs.)

1: Video out through a DVD or VCR.  Best Electronics recommends this one.  Its adding yet another stupid thing to be powered on and plugged in.  I can't be bothered.  And my DVD player is my PS3 with all its HDMI goodness.

2: RF or S Video through an SDTV.  S Video and an SDTV would probably be ideal but my SDTV with S Video is halfway down a flight of stairs in a hall with no power source.  And it weighs a good 100 pounds or so as its a console type and 25".  My 19" SDTV only has RF and it is in an awkward place for anything outside of a Gamecube stacked on top of a DVD and a VHS player in some unholy Tower of Hanoi configuration.  (Its like the Lament Configuration but with Mario.  "I've-a got so much to show you-a!  Except for Earthbound!  We-a don't talk about that game.  Don't worry, we can play "Imagine Babiez!"

And to wash that image out with another one, here is a bit of extra info on our aged and yellowed keyboard: 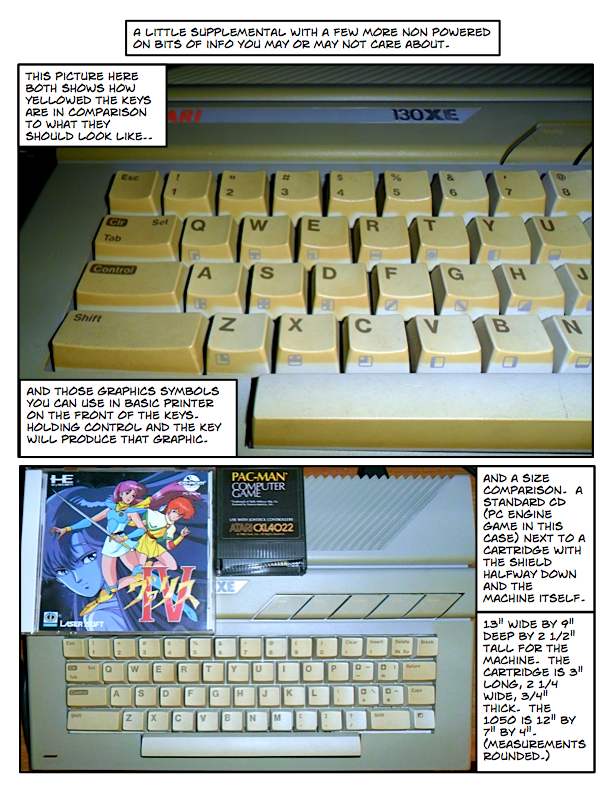 I am working on a solution to the yellowing too.  It just depends on finding a UV Lamp, a lot of Hydrogen Peroxide, and a safe container to use both in.  Have you played with toxic liquids today?
Posted by Captain Rufus at Saturday, November 19, 2011 No comments:

[Let's Play] Party Like its 1987! Let's Experience the Atari Computer! 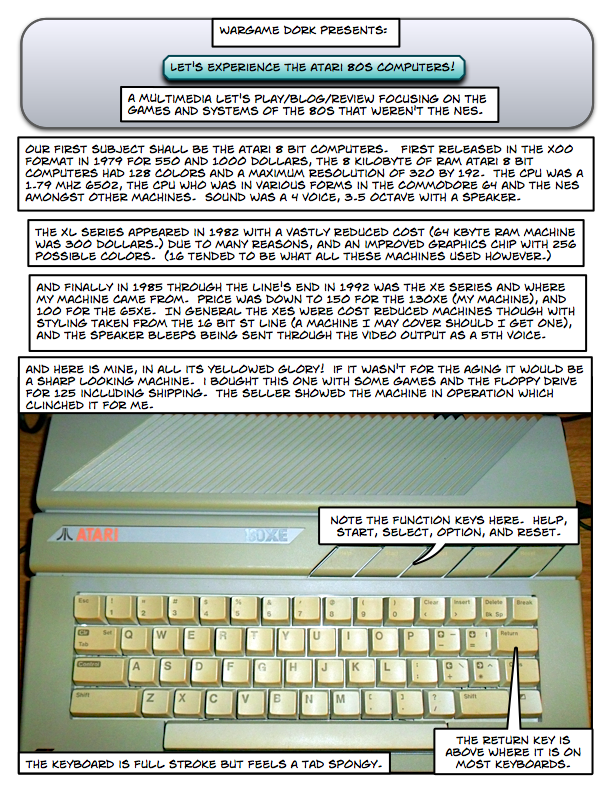 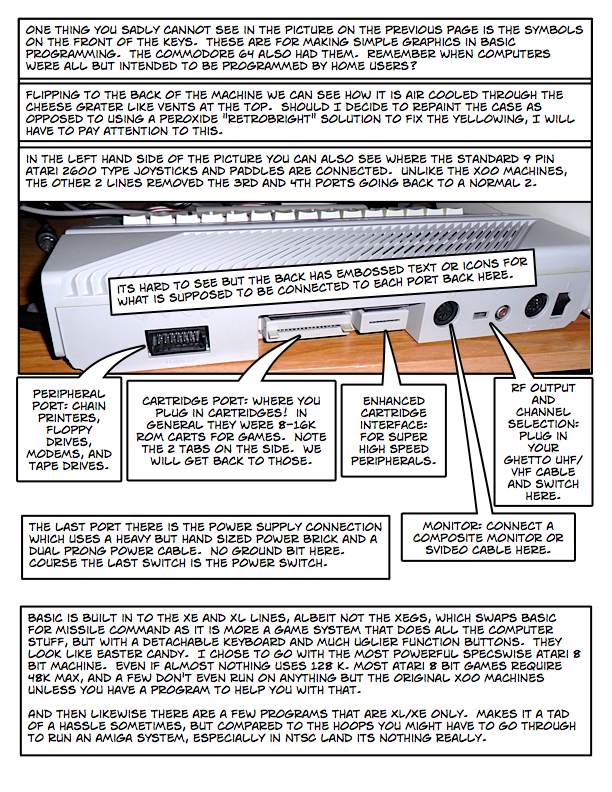 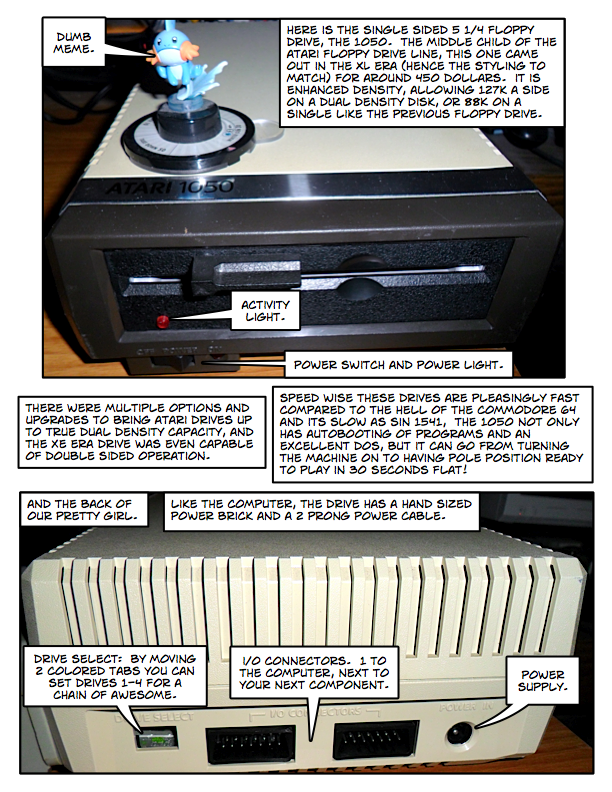 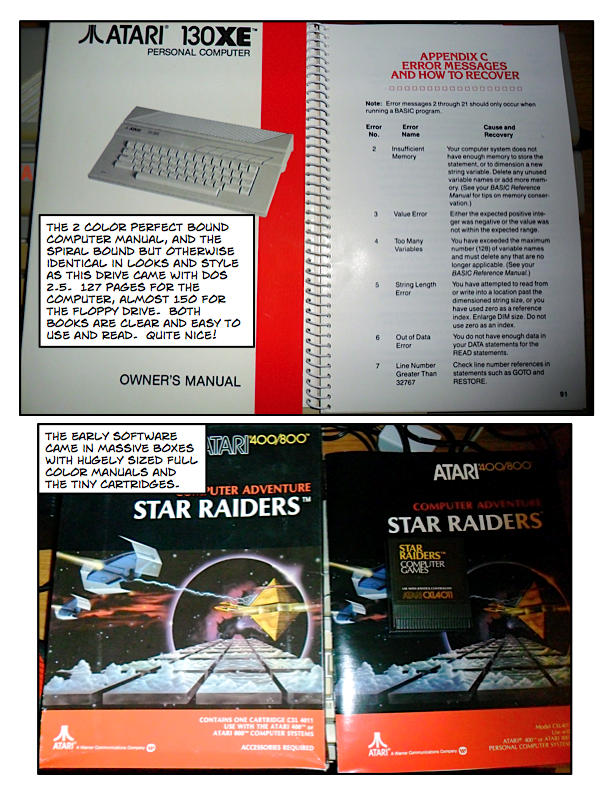 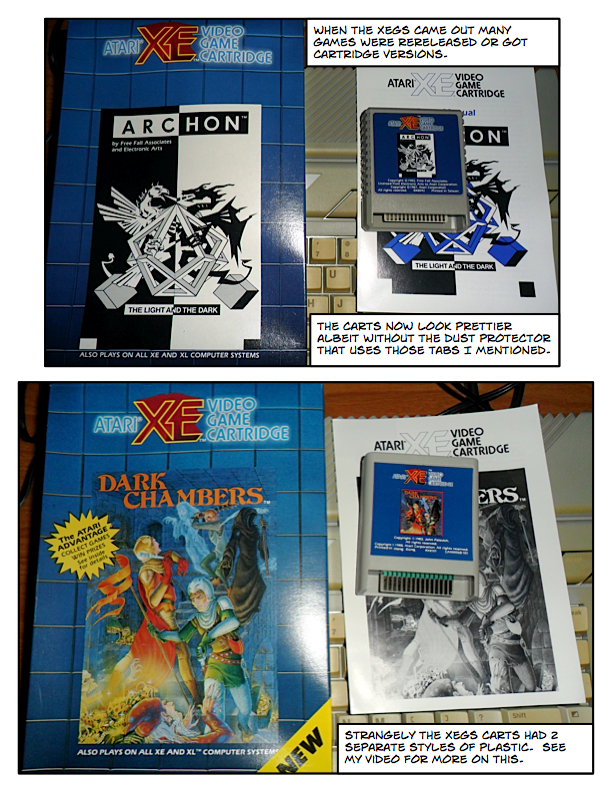 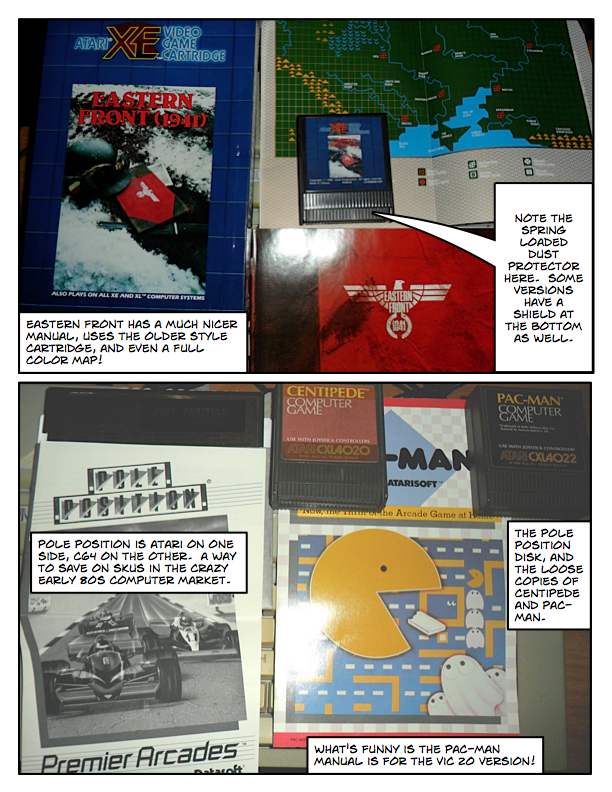 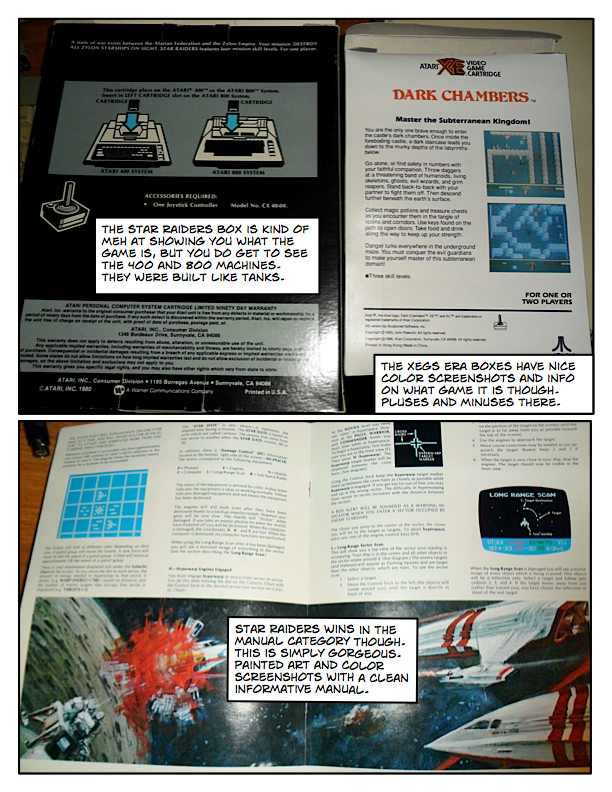 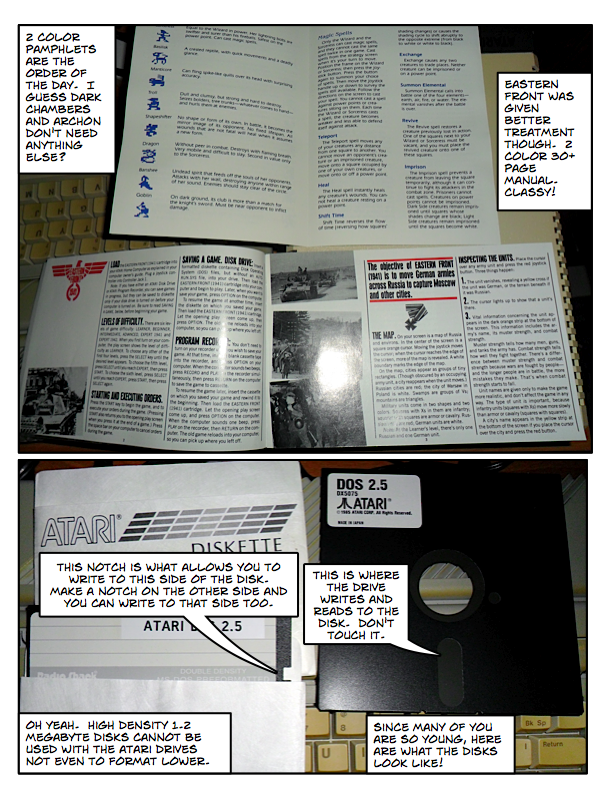 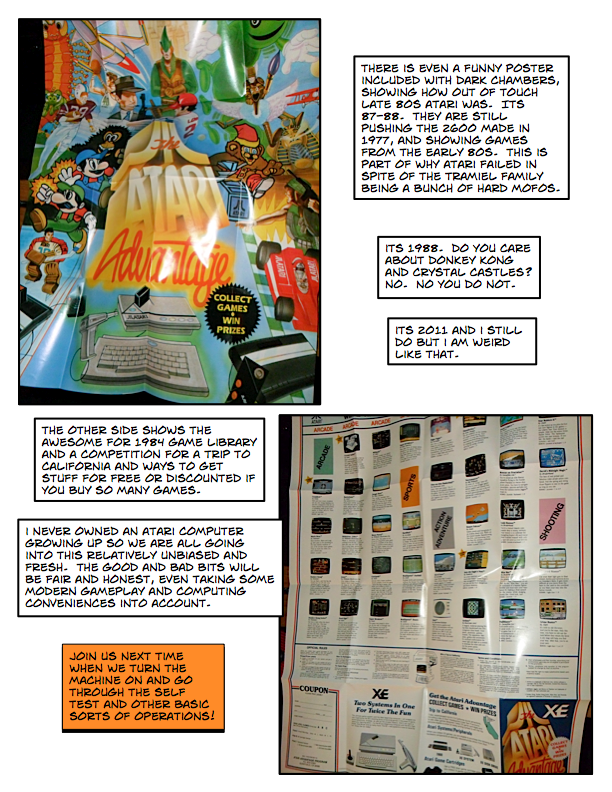 This is gonna be a multimedia, multiformat thing that goes beyond any mere Let's Play.

ITS A LET'S EXPERIENCE.

A mixture of blog, images in the comic format I am genuinely GOOD (ish) at, and sometimes video from an emulator just to show things at their clearest.

Some games will get played to completion.  Others will merely be a couple quick minutes or a few comic pages in coverage.  My thoughts on these games and ponderings on both collecting and playing them will happen in a loose review style as unburdened by either nostalgia or modern gaming biases as I can manage.  ( I never grew up with this brand of computers so that helps make it fair.  I was a Commodore man.  Which was the best 8 bit computer to own.)

I am sharing this experience because its fun to talk and interact with folks and create something.  I may even learn tricks to improve my video or writing as we delve deeper and deeper.  I may end up spending entirely too much money (oh wait already happened).  I may end up turning a few of you into retro Atari gamers.

Let's get this going and I hope everyone enjoys my descent into 1980s computers!
Posted by Captain Rufus at Saturday, November 12, 2011 No comments: