[Pathfinder] My First Pathfinder Dungeon: Let Me Show You It.

PS: MY PLAYERS STAY THE HELL OUT.

Well I picked up the Pathfinder Beginner's Box set around Thanksgiving and I am VERY impressed with it.  My 4e game had a near total TPK so I decided to ask if folks wanted to give it a try.  They did and we played through the starter dungeon in the box and everyone quite likes it.

Overall the Beginner Box ruleset is closest to the D&D I have always wanted, a more glossy Castles & Crusades.  Honestly its somewhere between C&C and normal D20 D&D.  Almost exactly what I want, and the players enjoyed it too.  Enough PC power and customization to be interesting, but rules light enough to not be the spergefest 3.x D&D really is.

So I used the initial dungeon as part of an entryway into a city, basing my campaign idea off of the old 80s Bard's Tale game.

They passed from the starter dungeon, and now are heading upwards.  Time to make my own dungeon.

And here it is, using about half the tiles from 2 different D&D Dungeon Tile sets. (Caves of Carnage and Lost Caverns of the Underdark.)  I decided to make a cave system infested with Kobolds. 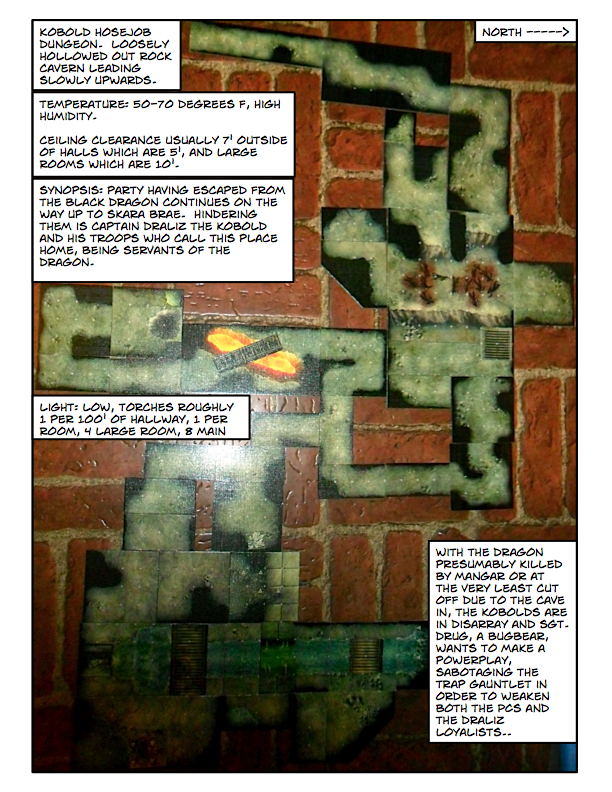 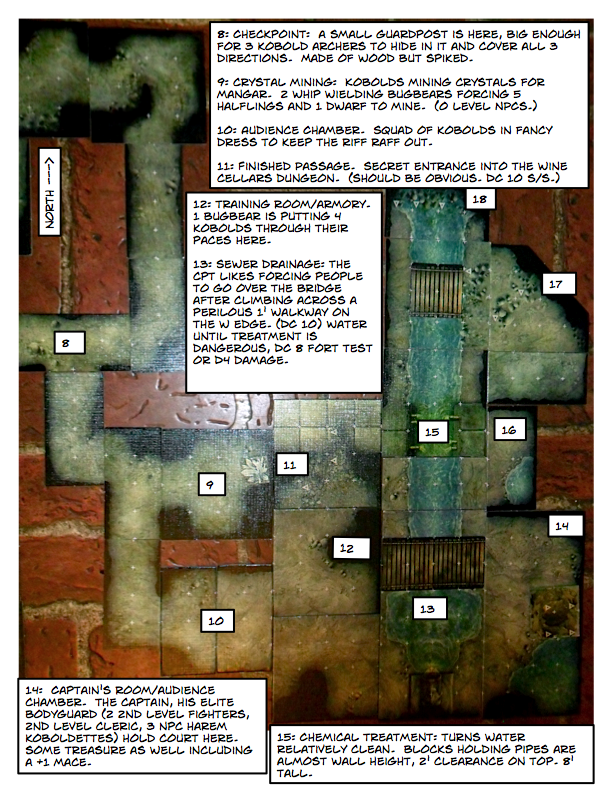 Now you may be wondering about a few things still as am I. I will use this space to add in more detail.
How do the troops get their food?   Its mostly imported in, though they DO eat both the infiltrating adventurer parties and whatever foodstuffs they bring in.
Will they run to alert others?  Sometimes.  In general the Captain doesn't want to be bothered.  With the noisy sewer water sound doesn't carry very far and there are doors here and there (not shown.  Figure 3-5 wooden doors, half DC 11 lock, DC 10 dart traps installed.) that also slow down the noise.  The Captain actually likes the sound.
What will I be doing for monster stats, given how most of the monsters I chose are NOT in the Beginner Box's suite of monsters?  Well, I have nearly every core D&D Monster Manual, and the Castles & Crusades monster book, which will be my primary source of monster stats.  (I'll provide a handy conversion chart next time.)
Posted by Captain Rufus at Friday, February 17, 2012 No comments:

Are You Ready for Some Blood Bowl?


Here is the first half of the first game in a short Blood Bowl league I am playing in.  Windows Movie Maker is being annoying so you might not get the second.  If nothing else, take it as a basic overview of both Blood Bowl and the computer version as I do talk a bit about the mechanics and strategy.  I'm not as loud as possible though as I had a microphone hooked up by the computer while I was playing.  Next game I may try headset as an experiment, see which one works best.
Posted by Captain Rufus at Wednesday, February 15, 2012 No comments: