It has been a bit but I actually got in a pair of Kill Team games (ok 1 and a half...) and picked up a thing.

Let us investigate what I have done eh? 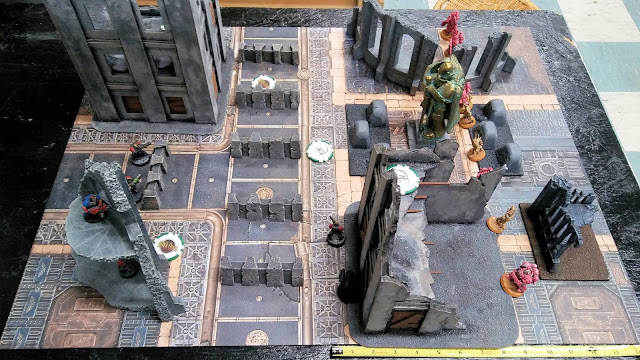 I got to play my first full game of Kill Team, my Nurgle build versus Space Marines of a generic type I think. 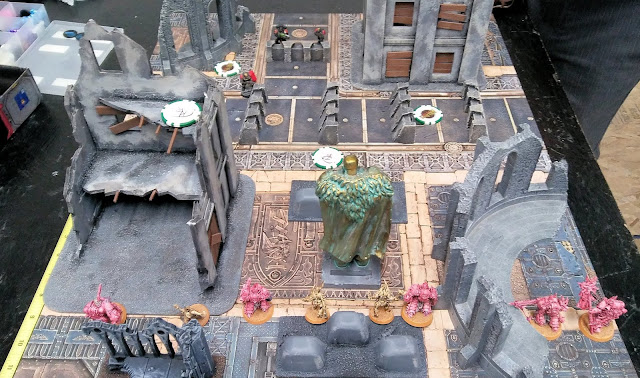 The mission involved those objective points being represented by poker chips although it would be discovered only one is the actual point. 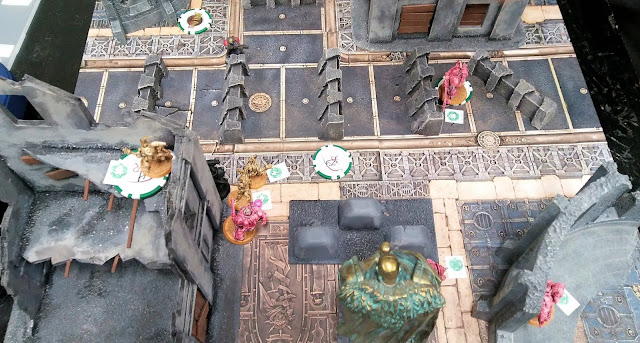 It was a good and fun match that my opponent said I more or less had in the bag on Round One but I felt tense and worried all the way through.  But I mostly won in close combat, with THE SMEGMATIC CORRUPTOR sealing the deal by taking out a Marine Plasma Gun dude. 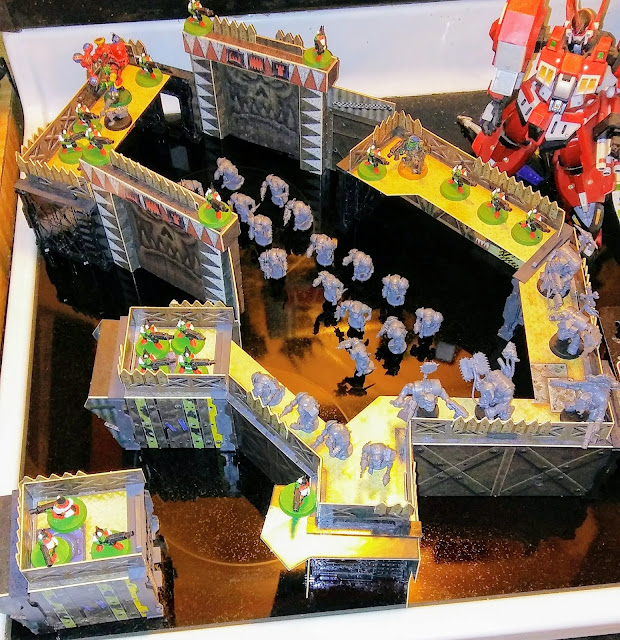 I did a bit of organization in preparation for ORKTOBER.  And find I could make a larger fort without needing more Necromunda bulkhead bits.  Sadly some home repair things may keep me from partaking immediately in Orktober.  Or getting the new Commander Kill Team expansion.  Or the new side game scenario involving a Rogue Trader and her retinue onboard her ship. 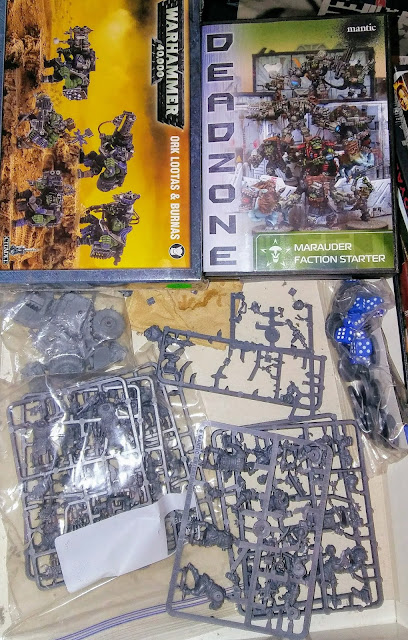 But I did buy a squad of Loota/Burnas for Kill Team.  With my Deadzone box and the Orks above I am at least set for Kill Team sans the new Commander character box anyhow. 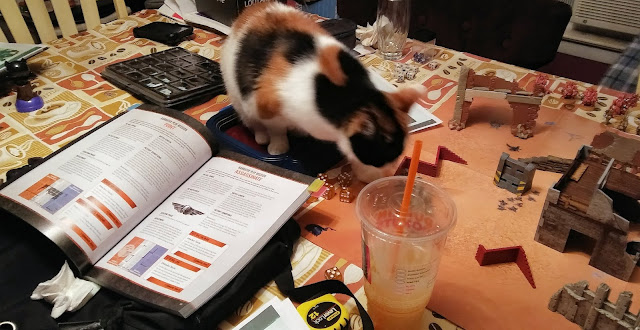 My teaching game with a friend had some issues via MARMALADE THE PSYCHO KITTY.  She decided to sit in my dice tray.  And take swipes at myself and her owner going near the rulebook.  I ended up getting her to move on via laser line pointer leading into another room. 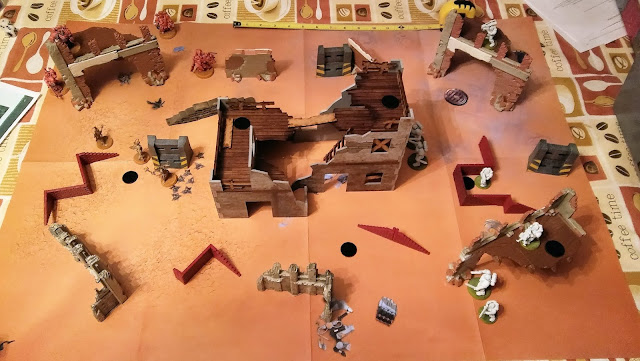 One of my AT 43 starter box play mats are nearly PERFECT for recommended game map size in Kill Team. 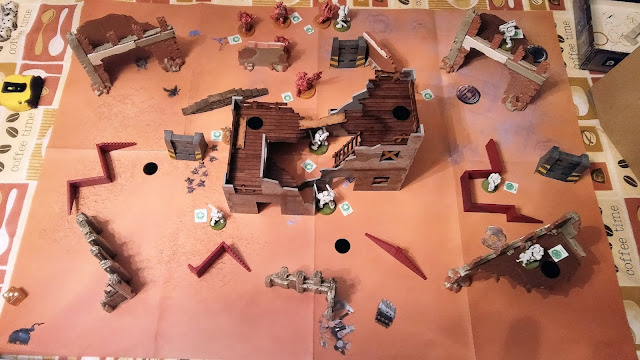 My terrain worked lovely for the battle. 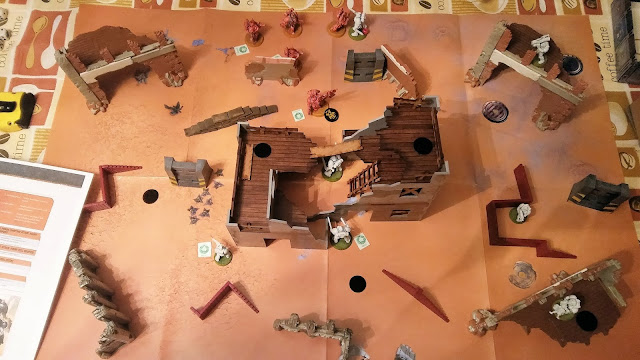 Time ran out but I was kind of losing with the Loyalists because I failed to hit and wound so many easy rolls.  It happens sometimes!

But Games Workshop just so happens to have released a pair of introductory, relatively low cost board games currently only at Barnes & Noble bookstores.  I bought the one below and then like a week later got the other one which I will probably talk about in another post. 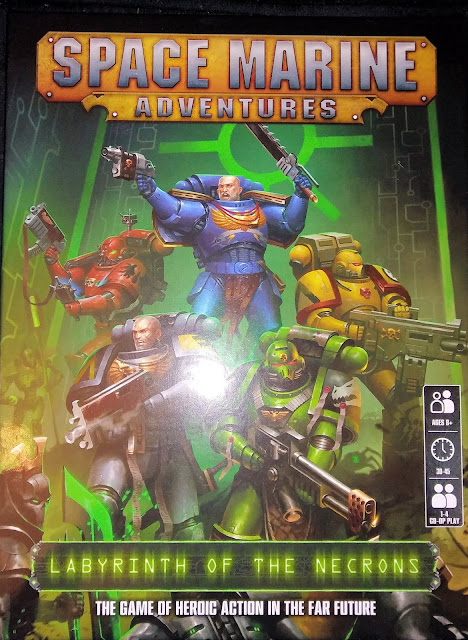 I went there for this 40 dollar game.  If it had been at Books a Million which is the bookstore chain I have a membership card thingie at I coulda saved a few bucks but that's ok. 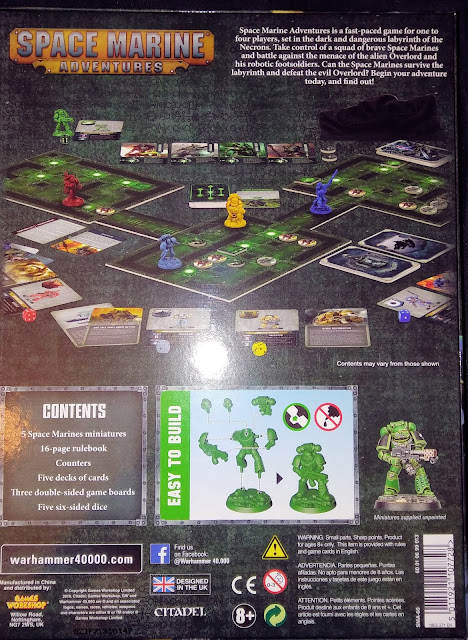 Its only got five miniatures taken from a blind box collection thing originally in Japan but it is against the Necrons and I play Necrons. 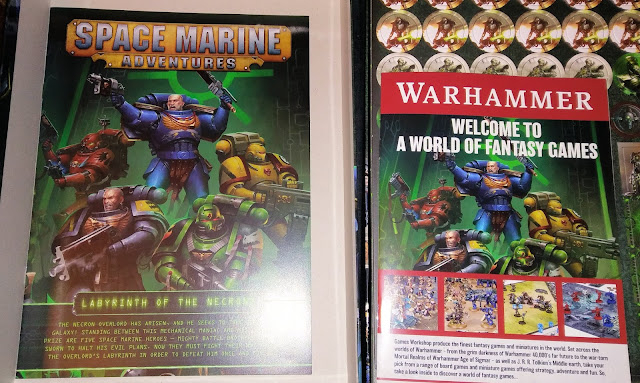 Yes it comes with a minor little promotional booklet to try to hook people into the big games.  But its not super in depth or anything. 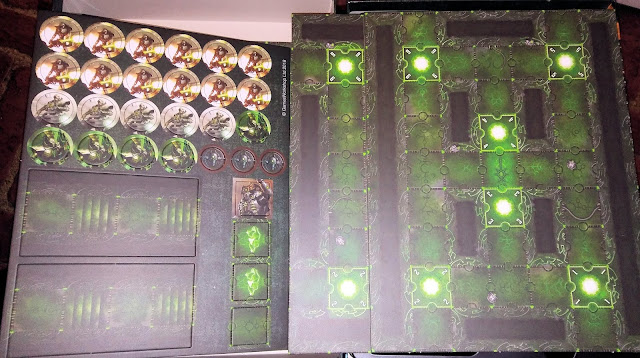 A couple sheets of cardstock including double sided map tiles.  Sadly the map tiles are VERY simplistic and generic and thus won't have the utility I hoped they might have for my Rogue Trader scenarios. 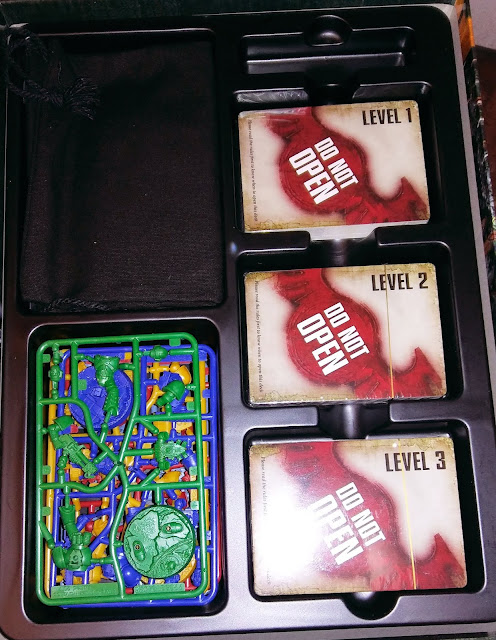 The game does have a nice vacuform tray that holds everything nicely.  The three Level decks are for the scenarios you can play by them singly or as a full campaign with some optional advanced cards to make it harder and more interesting. 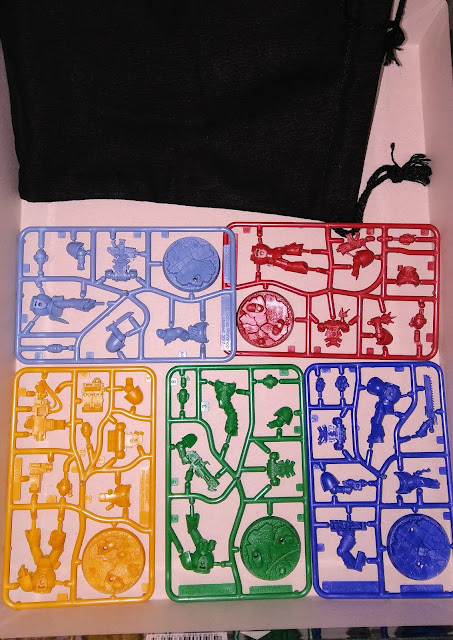 Our five Marines in all their push fit no tools required to remove from sprue glory.  plus the fabric bag you use to pull out Necron tokens to fight. 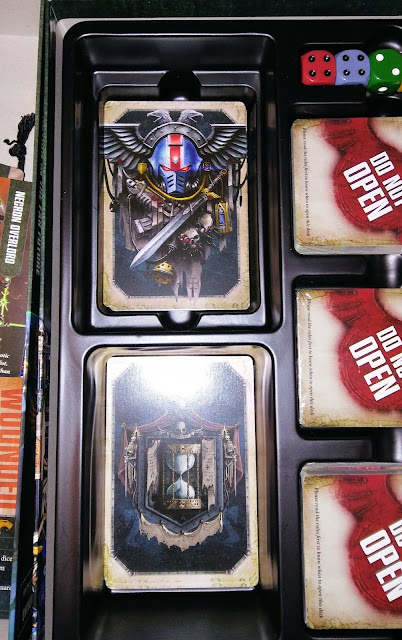 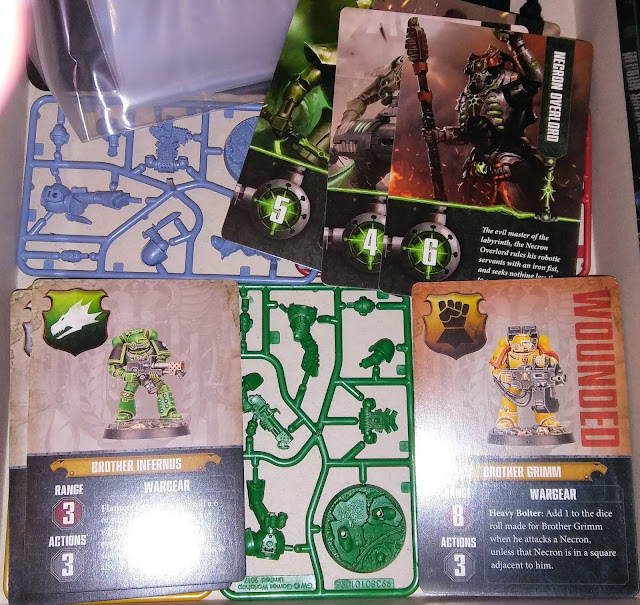 Reference cards for a couple of the Marines and our Necron foes. 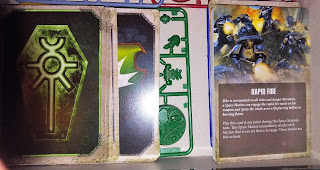 Other side of some of the cards. 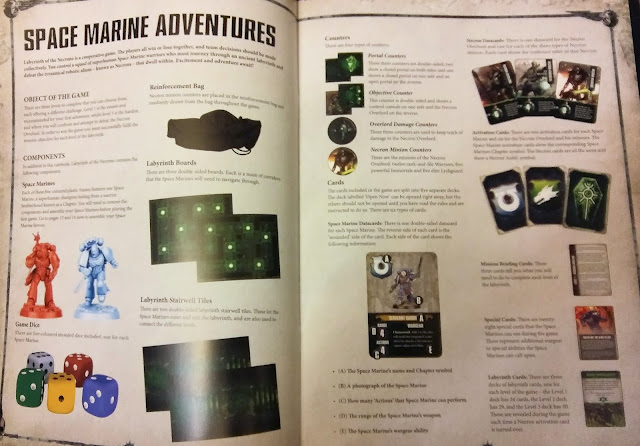 The actual rules in the rulebook is like 9 pages total. 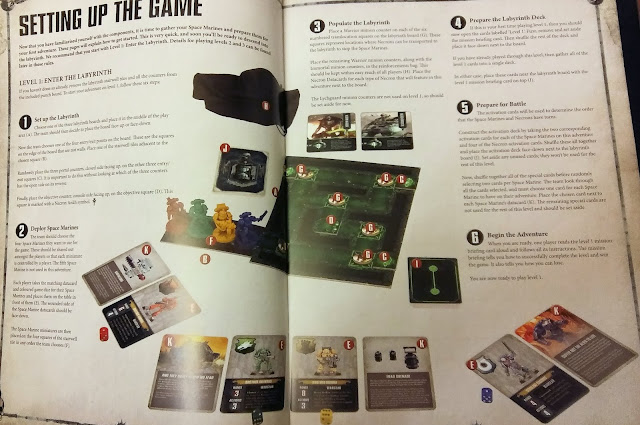 The rules seem pretty well laid out and clear.  I won't know for sure until I get time to get a game or two in. 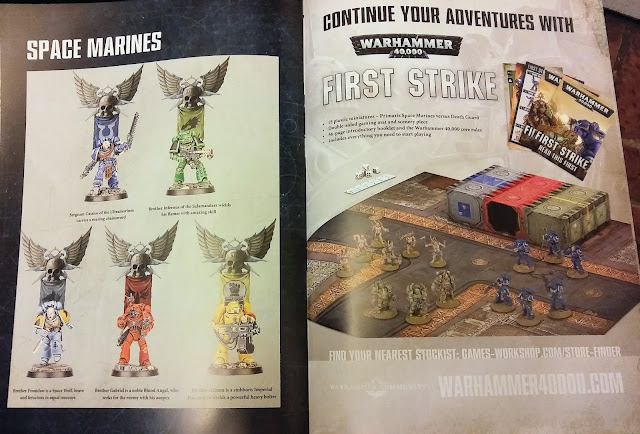 Yes it does waste a page on sending people towards the full game's cheapest starter set and one showing our Marines painted.  But not HOW to paint them. 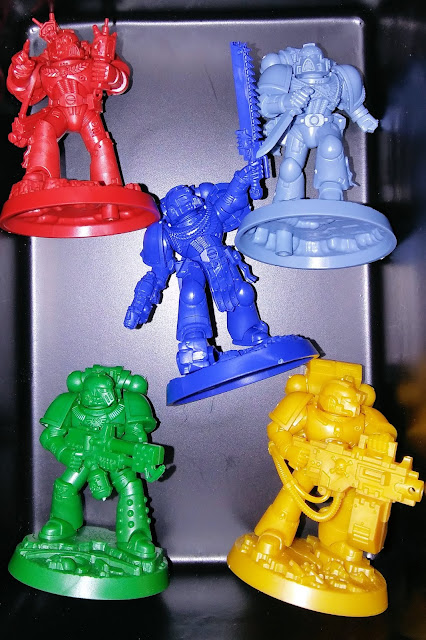 Our quintet assembled.  They look well enough without even using any form of tool, not even a hobby knife!  Decent! 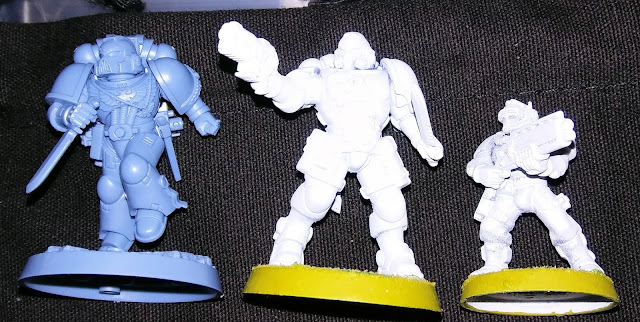 Our Space Wolf (although outside of plastic color these models could be used for any Marine faction.  I suppose you could easily use any weapon loadout Marine of the same gear to play it with.  Or paint these in any faction you want but maybe leave the base edges at the same color as the game's intended faction.  Note the Primaris in the center and the Scout on the right.  Scale creep is real my friends.

Sadly I have been busy as heck as always and things needed to being done and money spent on keeping my home livable and the like keep me from playing as much as I want (if at all given my hours of availability) so I have not had the time I might like to play or buy new goodies.

But in the next part we will see the other game Barnes & Noble stocked along with this one and maybe a play through of one or the other!  Or maybe even another Kill Team match?