Got out of work early today.  Going back in tomorrow.  So I don't have time to make a super mega fancy post before October starts up. Also y'all might like to see these things at a higher size.  (So click pictures for bigger if you wish.)  Please forgive any oversaturated colors via the meh but free photo editor I am using (only thing I miss on Macs now is iPhoto, circa the Tiger/Snow Leopard era), and any flash effects.  It will give us clearer pictures vs no flash.  And I have no light box anyway so we get what we get eh?

Now as to what I am covering?
Citi Block by Games Workshop

Why?
Because it is another of the products I need to have a complete run of Warhammer 40,000 Rogue Trader books.  Going by my old post here: http://wargamedork.blogspot.com/2012/08/my-games-workshop-rogue-trader-era-book.html I was just missing Vehicle Manual and The First Book of the Astronomican. Both of these books go for a LOT more usually than I am willing to pay.  This product I have seen go for a bit and be nearly as rare.

Except unlike the other two it has actual modern gaming uses.  And tends to go for a lot less.  I paid under 20 including shipping. 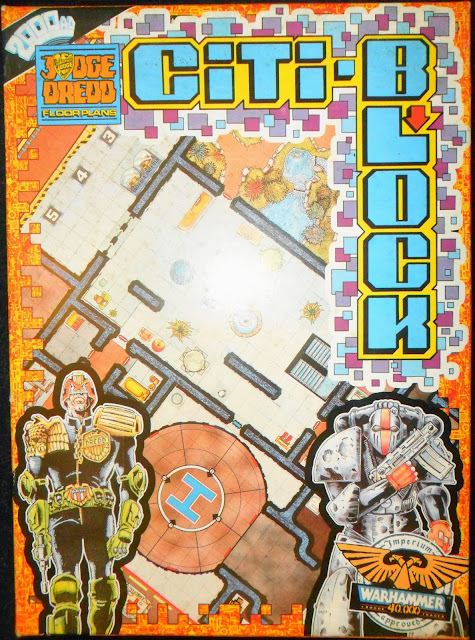 Our lovely box cover.  It is a dual use product from 1987, the year 40K was born.  Primarily a Judge Dredd supplement, with 40K mostly being a secondary use thing.  The majority of the rulebook is for Dredd but you can make use of a lot of those rules for your RT era 40K game.  Or any sci fi/dystopian urban game really.. 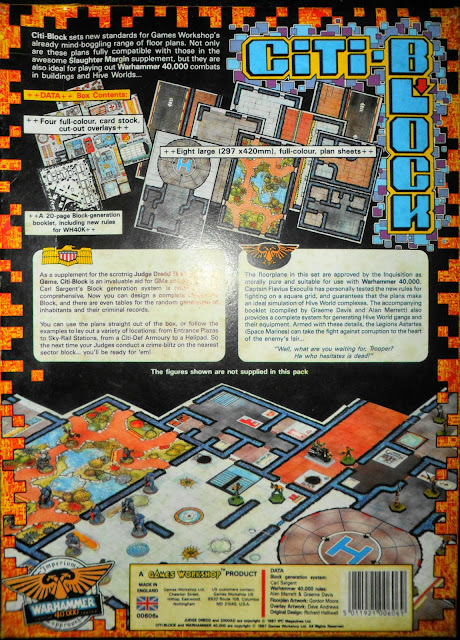 Back of the box showing some RT era 40K minis alongside some Dredd ones and a variety of the maps and tile counters put on top to build a layout.  I kind of adore how the 40K bits say it has been approved by the Inquisition for use. 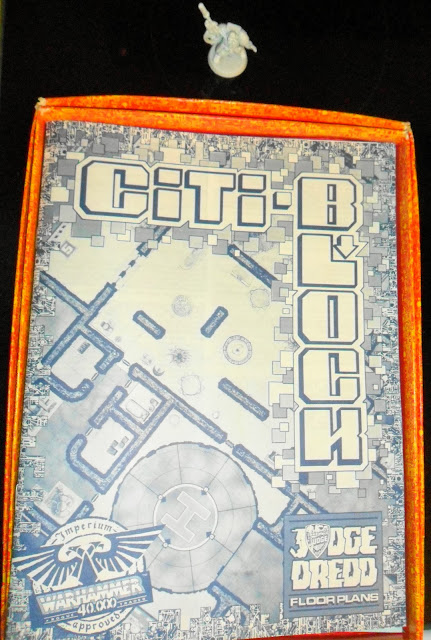 A picture of the manual in the box with a current plastic Space Marine Scout for scale.  The counters and mapsheets are all under the book. 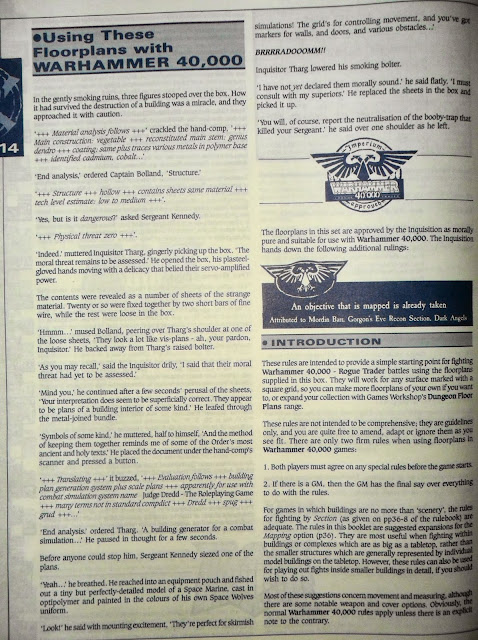 Of the 18 pages in this booklet (they number the cover as 1 for some idiotic reason..), only the last 6 have actual 40K RT rules.  The little fluff story is kind of hilarious, from the early days when 40K's setting was more a parody of grimdark stuff like Judge Dredd and Dune instead of the king of miserable settings.  Also these days GW would NEVER let an Inquisitor get away with just capping a Space Wolf Sergeant. 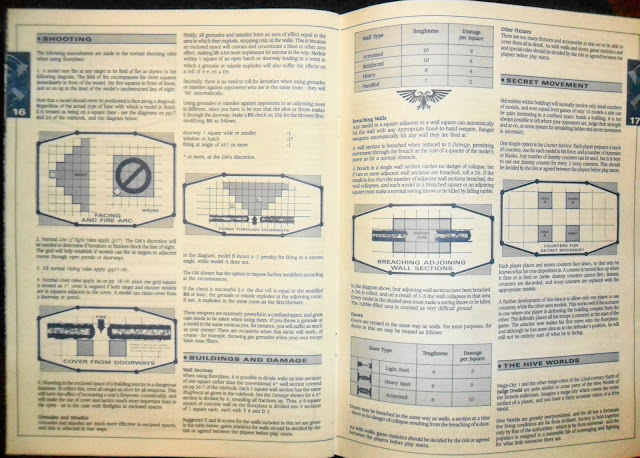 The rule mods for playing with squares is concise and simple, but could mostly be used with modern 40K without much effort.  Mostly.  You can tell it is early 40K as things like armor and turning affect model movement distance.  And facing obviously.  Note the Hive Worlds mention.  This is almost the first prototype of Necromunda as it does allow you to generate gangs.  (No mention of that place however.) 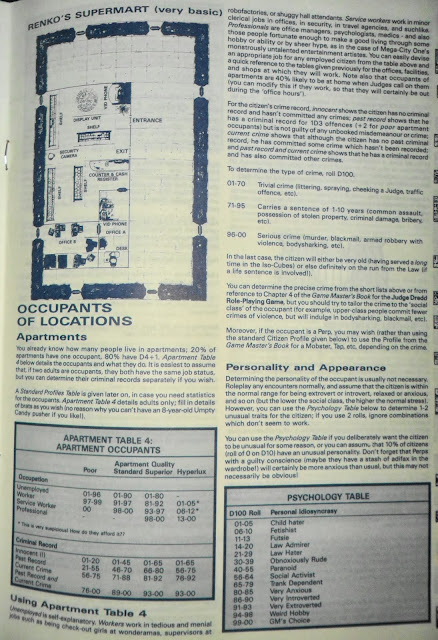 A section from the Dredd part of the book showing use of the sheets and tile counters to make a themed location and some of the charts so you can populate your arcology/hive/building.  Useful! 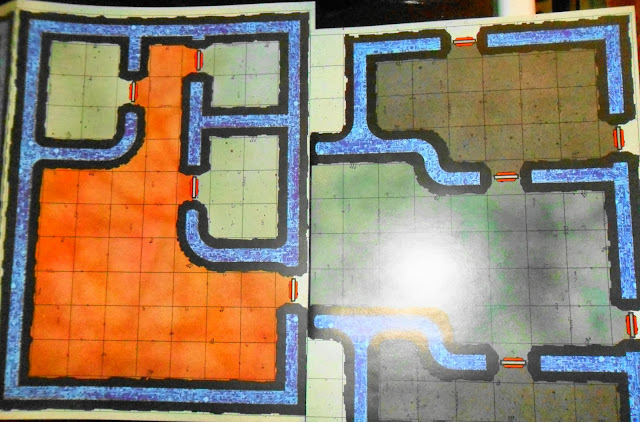 With a little aligning you can make good use of multiple sheets to make varying layouts.  It isn't really a traditional geomorphic style but it'll do Pig. 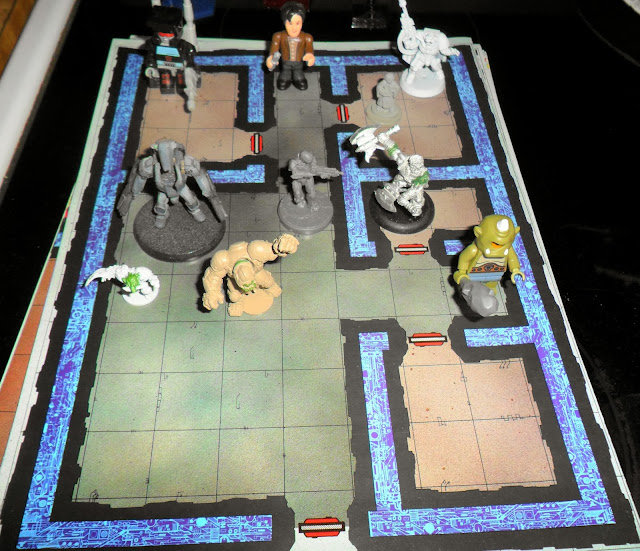 Obviously 1987 printing and art tech are lower than now but it is still nice and effective looking.  Here is a variety of figures to show you what they look like.    Kreo Trailbreaker and Character Building Doctor Who fit in the squares pretty well outside of accessories.  Our 40K Marine Scout has a tiny bit of base overlap.  A old 25mm scale Star Wars Bounty Hunter (that short bug dude) fits on it completely even with a penny base.  An AT 43 3 Star large base infantry (think akin to 40K Terminator) effectively takes up 4 squares.  Much like the Marine Scout, an infantryman from Sedition Wars (scale is roughly 25-28mm.) again has a slight base overlap but looks good.  (Also you know, Sedition Wars has non cartoon proportions.)  The Warmachine Khador Manhunter's lipped base goes a lot more over the square but is pretty ok.  The two unbased DreadBall miniatures (a Goblin star player and a NOT 40K ORK NOPE) fit fine though like a lot of minis their poses and such go well beyond their square.  And the Lego Cyclops figure fits much like his Kreo and Character Building cousins.

I honestly would more recommend taking the sheets and seeing if you couldn't scan and blow them up a tad so the 7/8ths of an inch becomes a full inch.  The problem would be those weird UK page dimensions.  I suppose if you didn't mind the thick black of the walls being cut off a tad and some of the blank edge removed it would work fine.    But if not or you play 15 and 25mm scaled figures these sheets are great without any effort.  28-32s you might have to reposition figures or deal with bases overlapping each other.

But that's not all!  WE HAVE (cut out by some dude probably years ago) TILES! 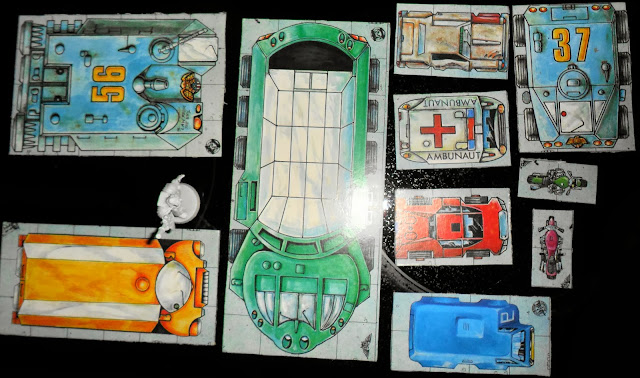 A bunch of vehicle tiles which are great for more cyberpunk styled games. 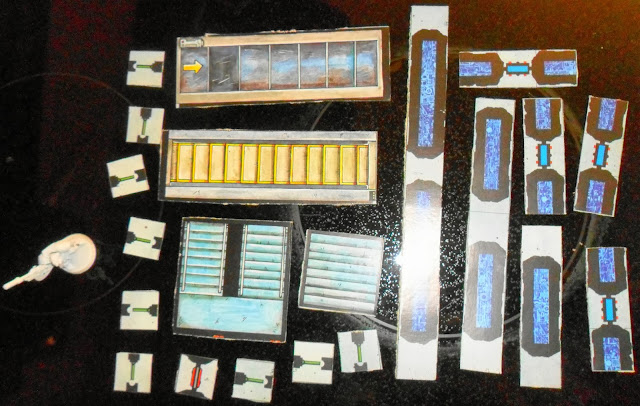 A bunch of stairs, escalators, walls, and doors to let you make those sheets do a near infinite amount of layouts. 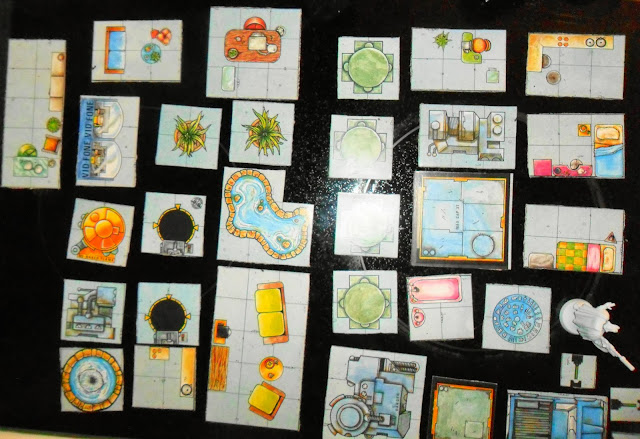 A bunch of multi square tiles with things like machinery, pools, tables, counters, and other such things.  (And err.. a couple more vehicle and door tiles I missed.) 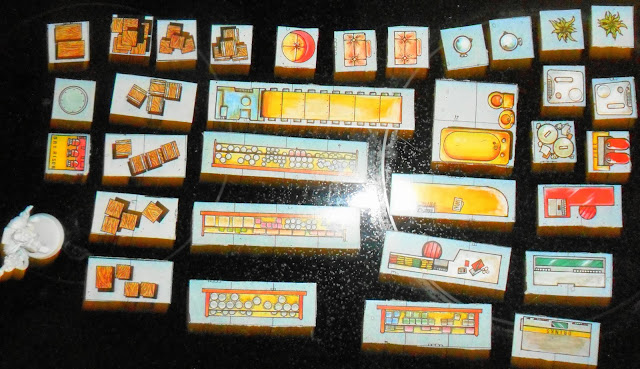 And even things like conveyor belts, shelves, and those oh so prevalent crates no modern game with modern or sci fi shooting can go without.  Meaning Games Workshop in 1987 was INNOVATING perhaps?

All these tiles are decent and would make a battle or adventure map REAL.  Toilets and bathtubs even!

I divided the tiles up into 4 zip baggies of various size to keep them roughly organized.

So what is my verdict on this set?

For a Rogue Trader collector it is probably an alright pickup but by no means a must have.  Same with a regular 40K collector.  It is the beginning of 40k's era so there wasn't much fluff set in stone and it was honestly more an afterthought product, primarily being for Judge Dredd gamers.  These tiles aren't exactly 40K's technogothic grimdark after all.

For anyone needing sci fi or modern/near modern square based maps for miniatures games and RPGs though this set is great.  While the tiles are thin cardboard and the map sheets are thin single sided paper, they should hold up to reasonable use fine and are easily scanned for more copies.  You can make a ton of different maps with the set as is, and the block generation rules in the Dredd section have major use for basically any RPG or skirmish game.


Posted by Captain Rufus at Monday, September 30, 2013 No comments:

D&D 4th ed Session Report 6: Things to do in Dungeons When You are Dead.

I had to work last week so no D&D then but there was a session the week before.  A session of tragedy for me as Alexis suffered an unfortunate end.  Luckily this ending didn't involve being forced to give Rush Limbaugh sponge baths but.. well.. you can see for yourselves: 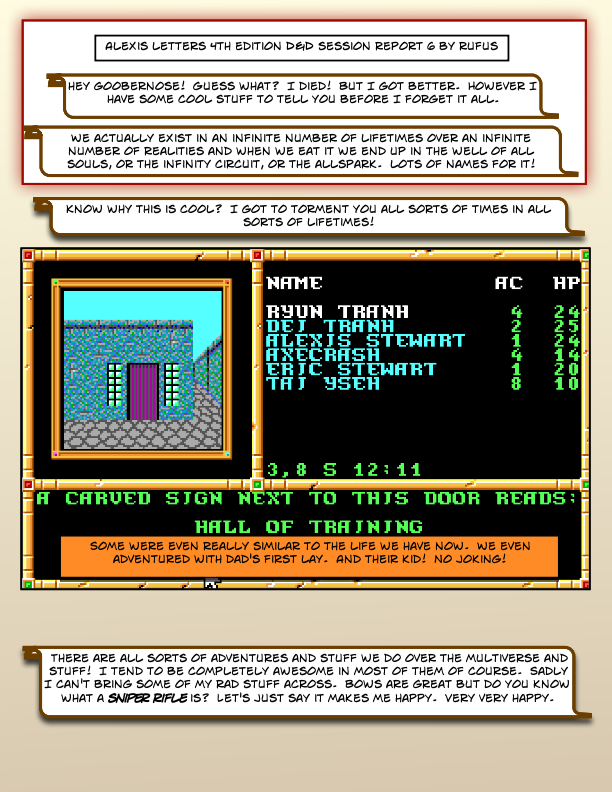 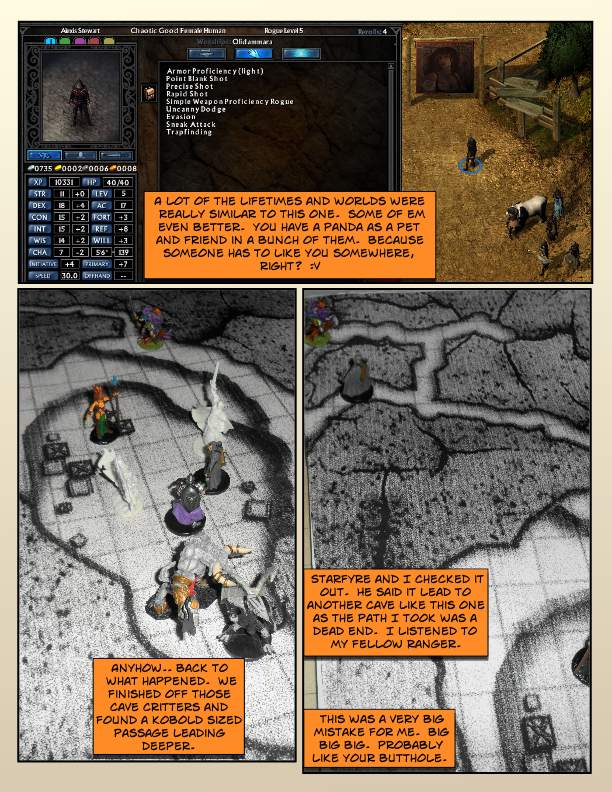 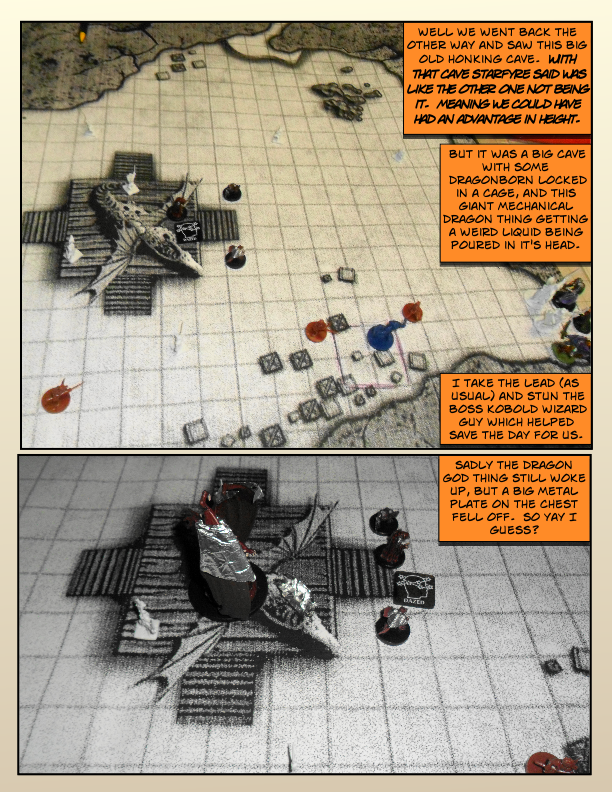 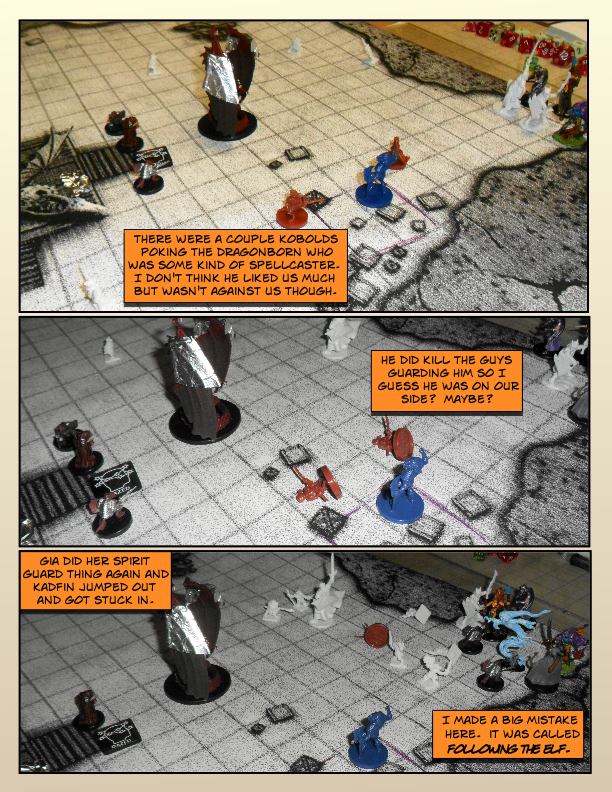 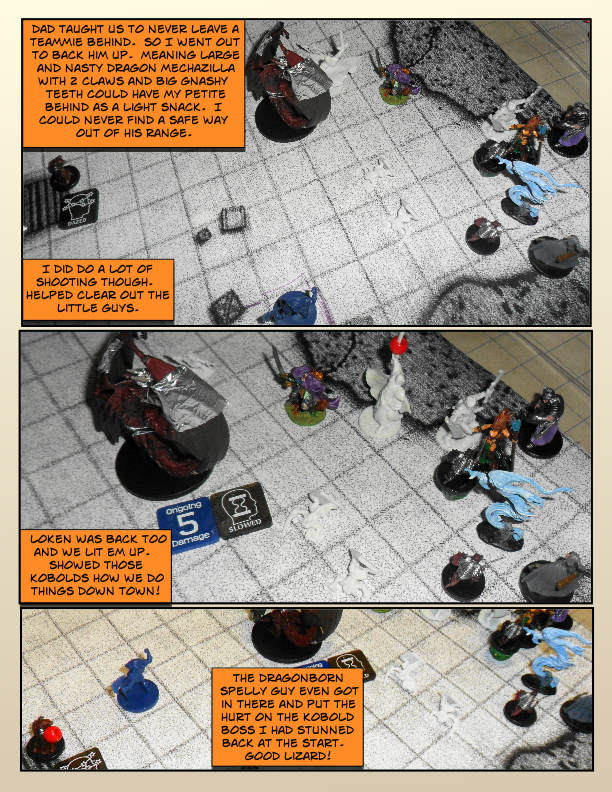 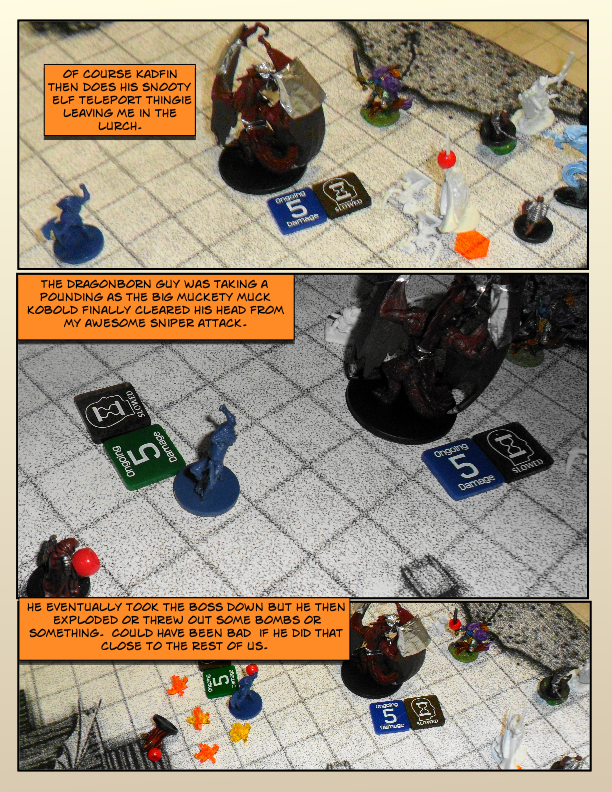 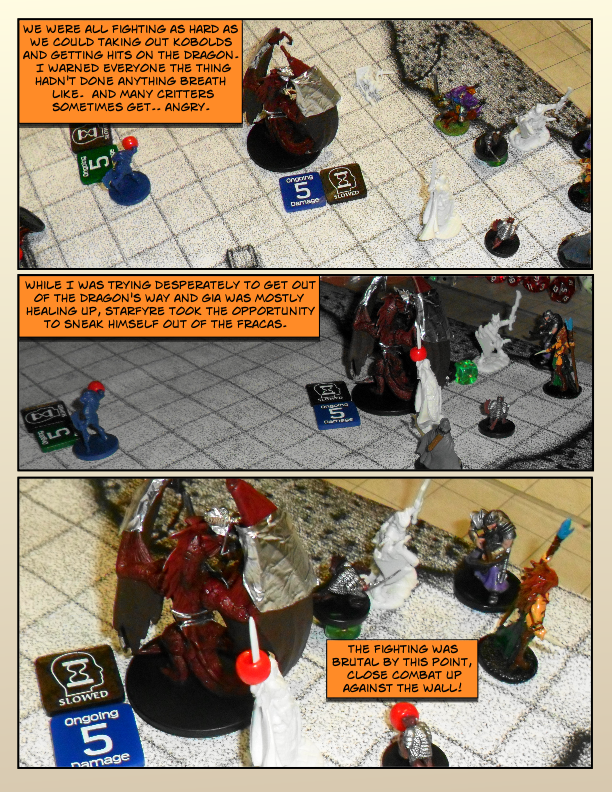 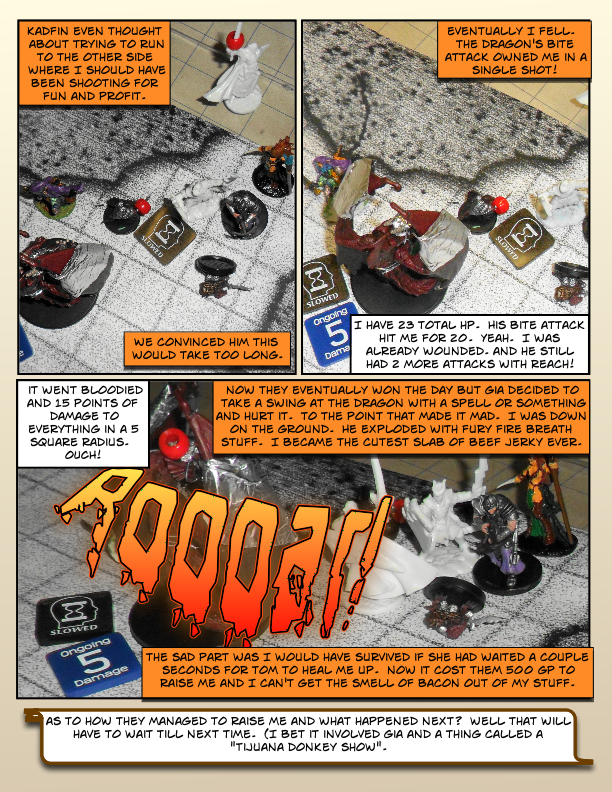 Well that was Alexis painful introduction to level up.  Getting toasted by a dragon because SOMEONE HIT IT FOR MINOR DAMAGE CAUSING IT TO DO A BLOODIED EFFECT LIKE I WARNED EVERYONE ABOUT.  They are getting her raised and it made for a nice segue as I wasn't around for the next week.  So Alex got time in other realities and stuff.

Yay?
Posted by Captain Rufus at Tuesday, September 17, 2013 No comments:

Shorter update this week.  More work hours, lots of stuff to do, Walking Dead Season 2 on Blu Ray on sale.  (Really should ignore Something Awful folks when it comes to TV show opinions.  They never seem to like anything.  Ever.  Even the shows they love they do nothing but overanalyze and gripe about.  Y'ALL GOTS TO HAVE SOME JOY SOMETIMES GUYS!!)

Plus there may be another new project coming from me..  (hints after the update) 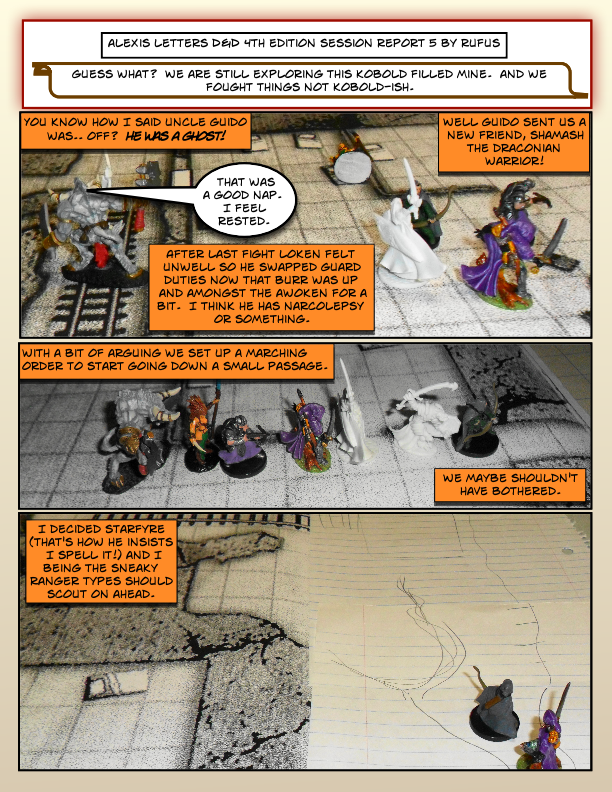 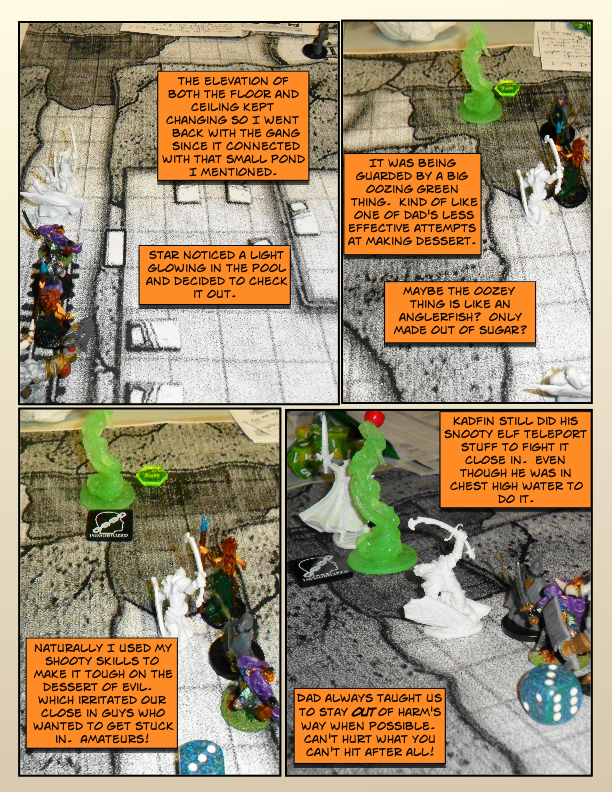 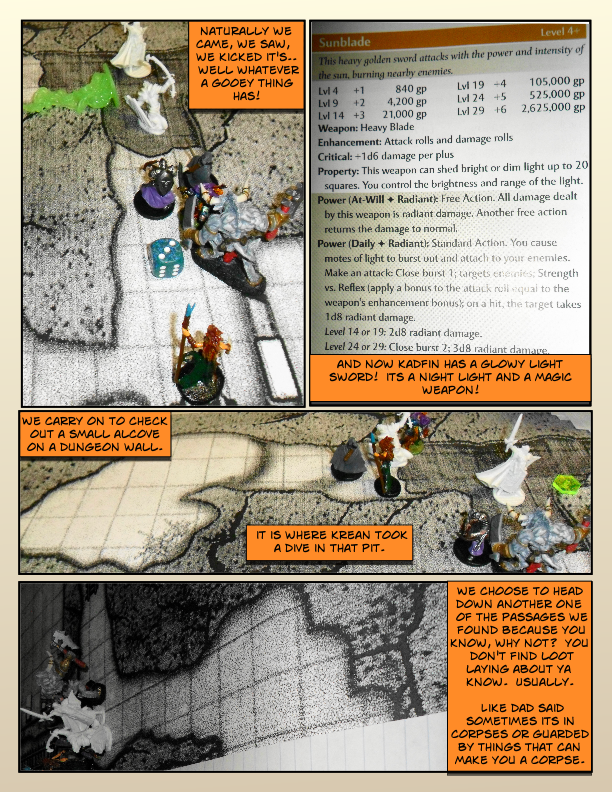 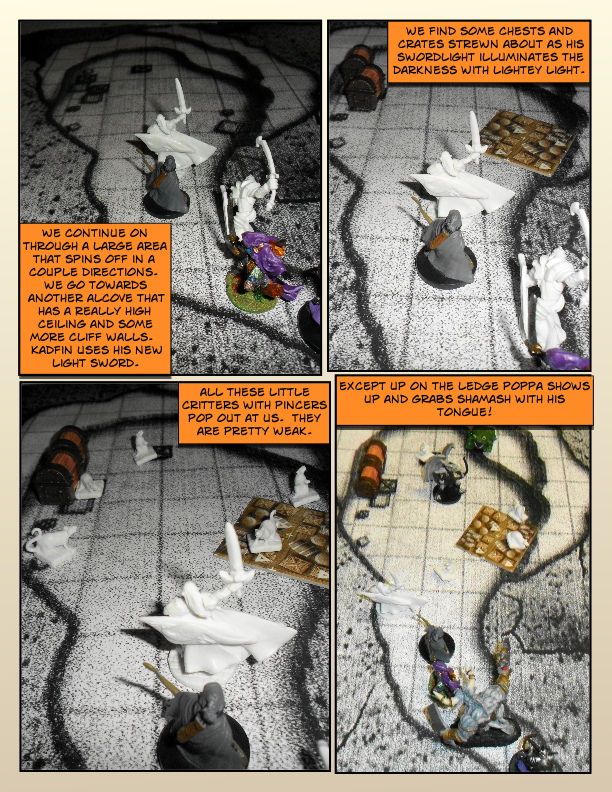 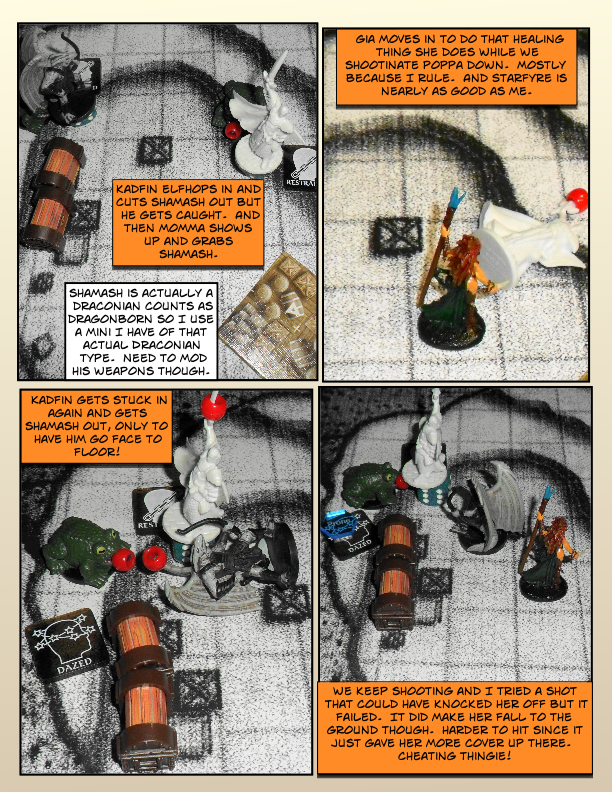 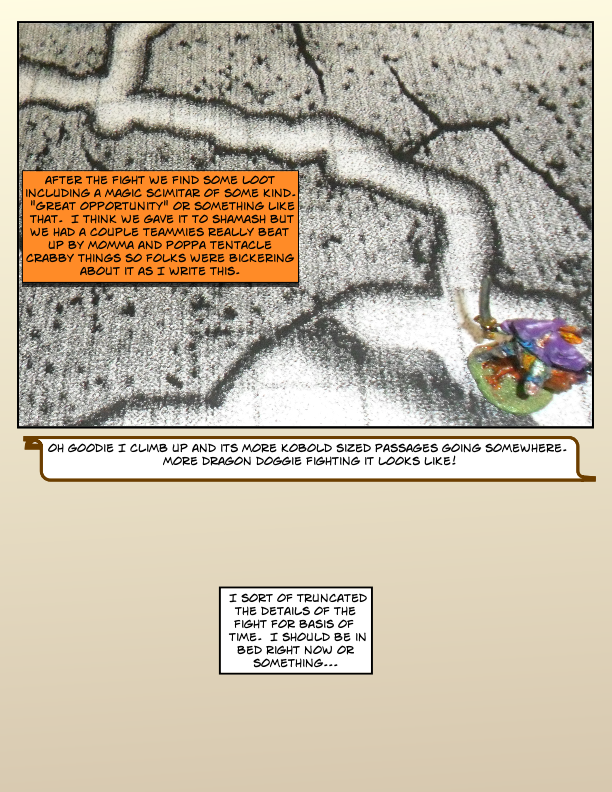 See our DM may be taking a siesta after this week.  If I am running a non minis type of lighter RPG (possible) I will not be really doing this sort of comic report.  And thanks to an ebay purchase I now have some better copies of a couple games.  I may.. want to do something like my old Order of the Griffon Let's Play that is both here on my blog AND over at http://lparchive.org/ .  (Though I would prefer folks read it here starting at:  http://wargamedork.blogspot.com/2011/05/lets-play-fun-in-mystara-lets-play.html .

This game isn't it, but it IS a hint:

Appropriate given the Kobold-riffic adventure Alexis is in.

And I mean my main videogame I am playing now also takes place around that region, with our old pal Sneakycheeks:

What stupid idea might I be doing while 4e Alexis takes a siesta?

IT IS A MYSTERY.
Posted by Captain Rufus at Wednesday, September 04, 2013 No comments: