Yes.  The delayed for a year ultra game has finally been inflicted upon the gaming world.  The megagame version of a game one could fit in a pocket originally, or slip into a backpack in the version I fell in love with.

The greatest wargame ever made.  The Jesus Christ to Munchkin's Anti Christ.

While this is merely the first part of my Ogre coverage of this version and my Ogre collection in general, this game is so... absurdly massive the pictures I took of my unboxing of the main set alone say more than I ever could just about.  And this isn't even counting the bonus box I got too.  (Maybe show that whenever I cover part 2.)

So gentlemen behold the Mandingo of Wargames.  The Atari 5200.  That South African SUV that's immune to having explosions under it.  6 inches of thickness.  20 inches of tall.  24 inches wide.

Behold the Hell That Came to Kickstartertown:

(Please click pics for larger if you really want to see more detail.  Also camera flash or fuzzier picture.  Deal with it.  Maybe my lower MP Ipad Air whenever I get it will take nicer pics even with being a 5mp compared to 14.1?) 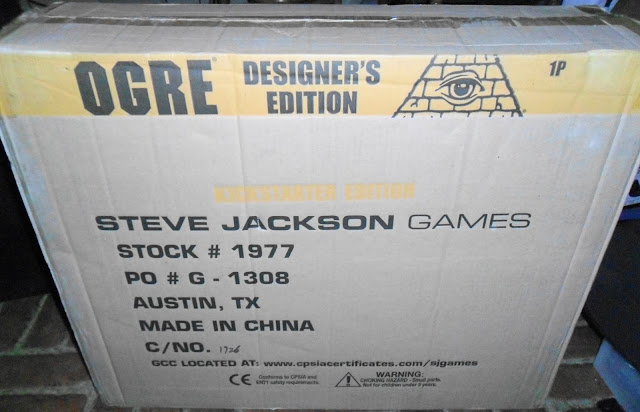 This is the main box Fed Ex dropped off.  I could have had this yesterday but I sleep days and had to leave the signing slip oking them to just leave this and the smaller box on my back porch. 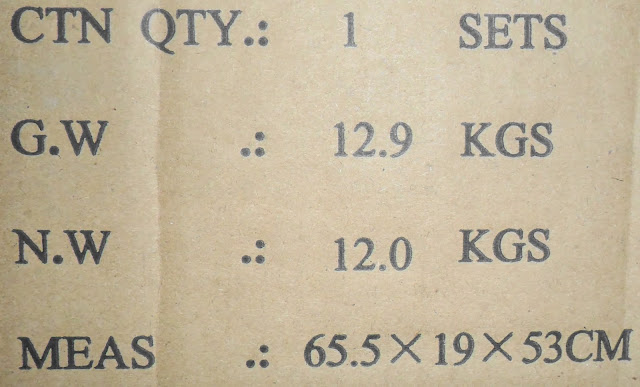 Our metric using folk can convert this if they want.  Hint: ITS BIG AND HEAVY. 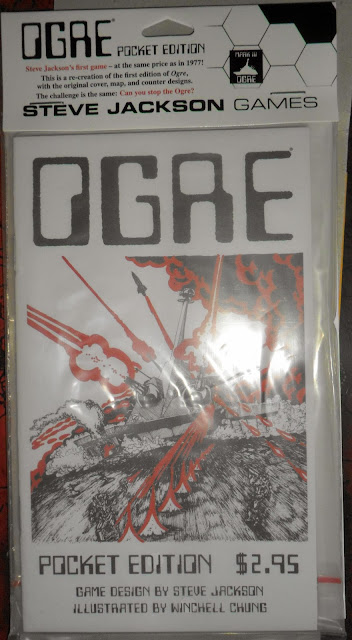 Eventually this uber cute and cheap mini reprint of the original zip baggie game will be available for all to buy.  Like in Summer 2014 apparently.  I will be buying plenty to gift. 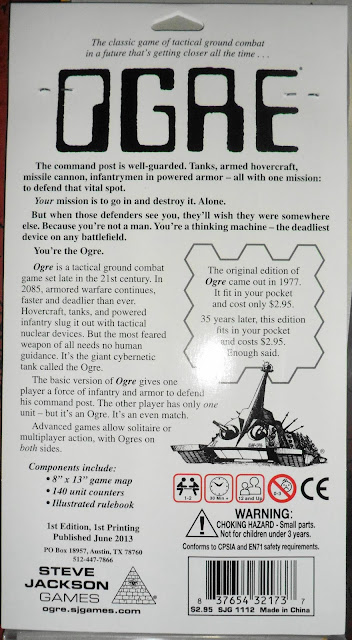 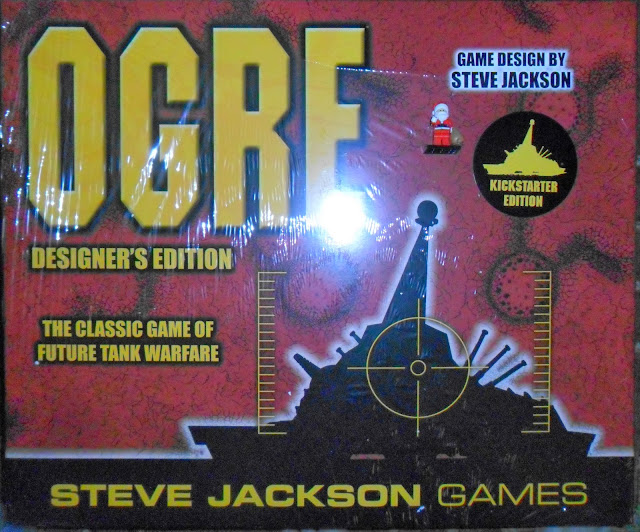 Yes that is a Lego Santa Claus Minifig for scale.  It is an enormous box.  I ripped the plastic off trying to pull the SOB from the shipping box.  I ended up putting it on it's side and sliding it out. 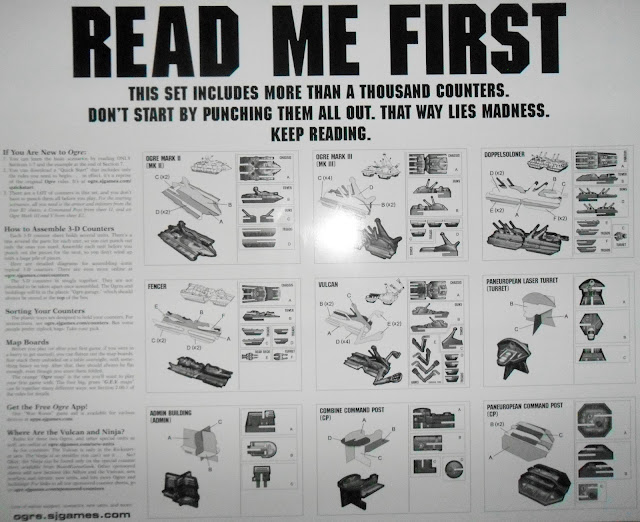 This is the back sheet covering the actual back of the box.  Along with all the counter sheets.  They don't all fit into the box to begin with! 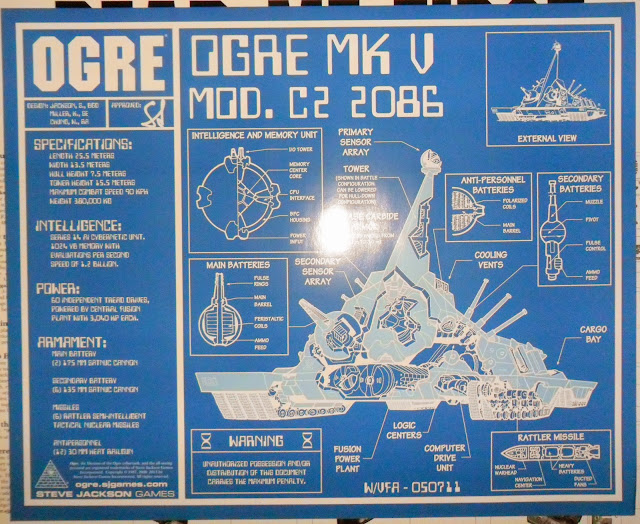 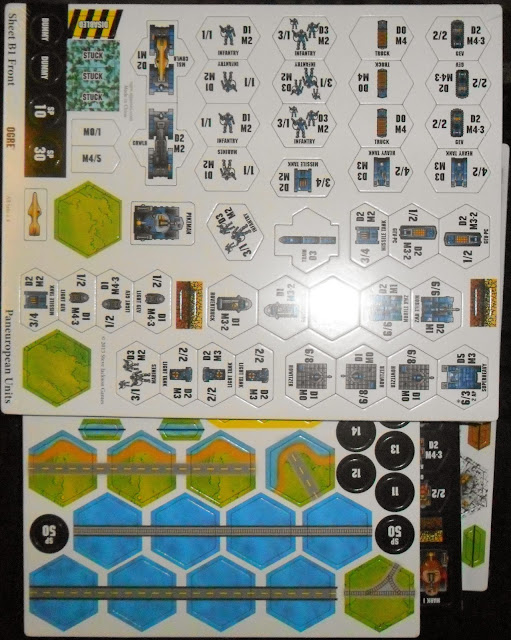 The FOUR packs of double sided, pre cut counters.   Stacked together it is 2.75" or so THICK.  Big heavy full color cardboard. 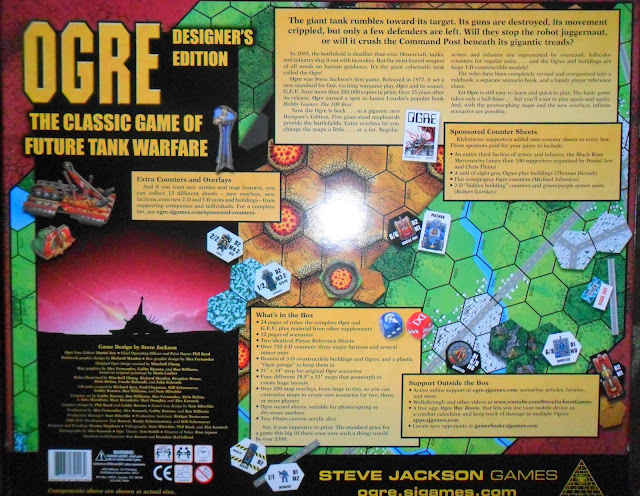 And the back, showing how insane it all is.  It may be the ONLY boardgame I have ever seen that recommends TWO PEOPLE LIFT IT.  Its like 20-25 pounds heavy.  And larger than most minitower computers. 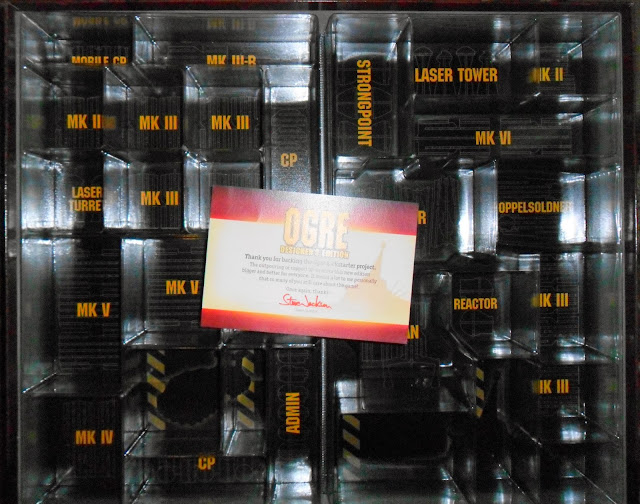 All the sealed plastic bays to put your cardstock assembled bits in.  Even labeled for you! 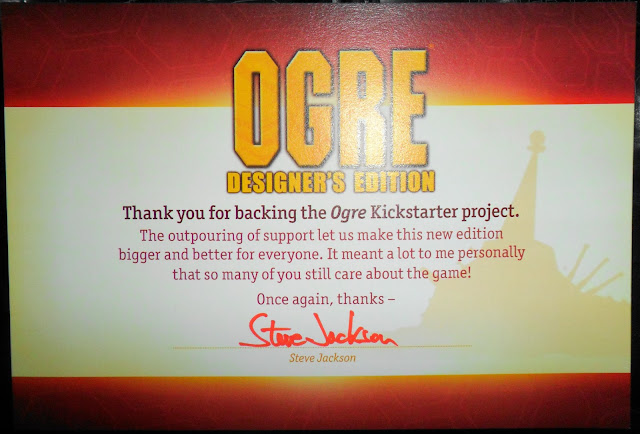 And Big Steve's personal thank you slip.  Also possibly showing how nobody at SJ Games realized how many people love Ogre and not that Munchkin garbage. 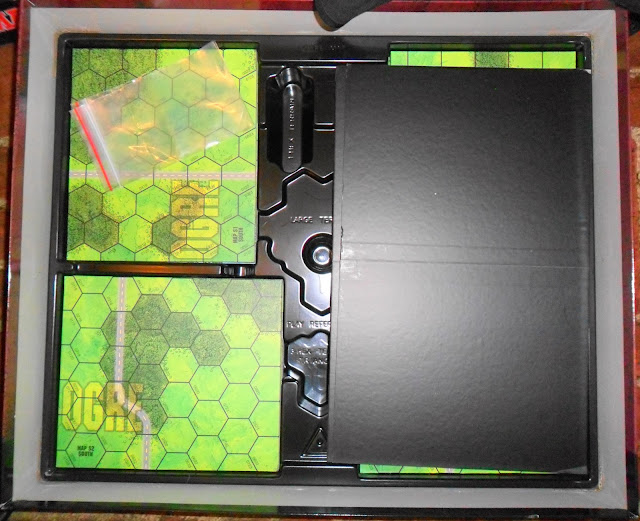 Taking the two garages off we have another layer.  With map sheets, some zippy bags, and sadly the folding original Ogre mapboards just floating around in there.  I have no idea how they are supposed to fit really.  And neither did the factory that made this thing. 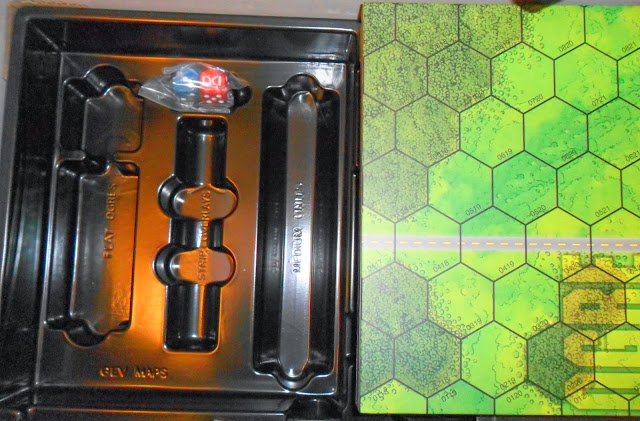 Moving some of the geomorphic 4 way fold normal map boards out of the way we see MORE labeled spots for all this stuff, and the fancy pants dice with the main faction logo and their color on it.

(This will probably mess me up a little as my metal minis are in reverse colors I think.  Bugger.  I suppose I could just respray them or spend a few weeks Simple Green soaking and cleaning them all..) 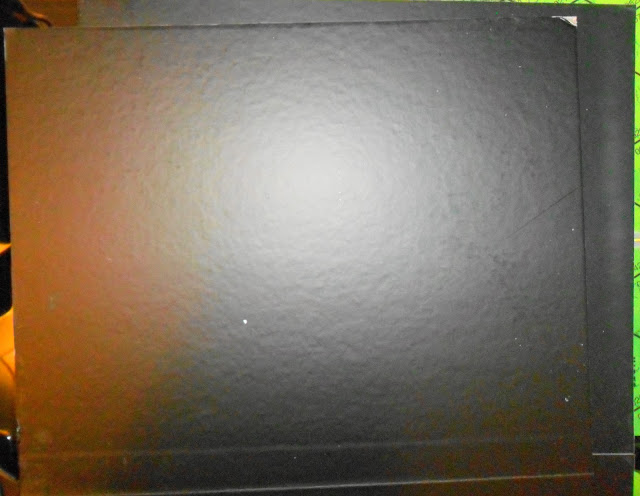 Some of the damage to the original Ogre board.

And some more.  I could probably just fix it myself with a little white glue.  Depends on if I want my 150 or so dollar investment (that I probably could have sold for 200-250 on Ebay if not more.. the only Ogre auction I saw ended over 200 for the base game and none of the KS bonuses I had) to be perfect before what little use I get out of it because Southeastern CT gamers are all boring and or antisocial for the most part and only play their one or two beloved games and thus it won't wear out except if I handle it badly.

It just makes me feel a bit sad. 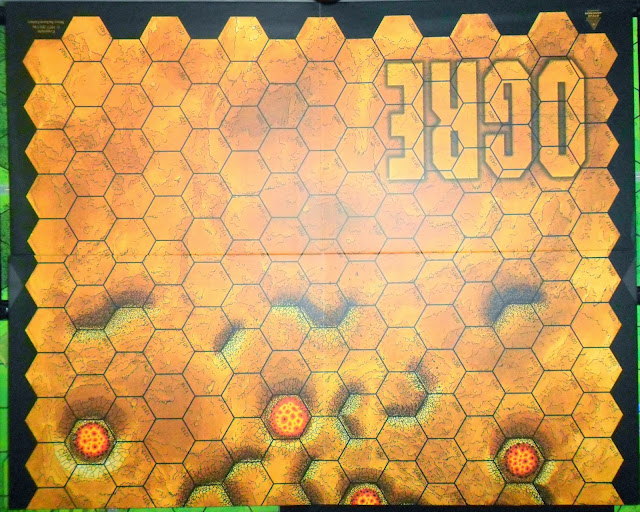 Looks fine and dandy on the side that MATTERS though.

One of the short sides of the box top showing some of the models assembled and some counters.
Not shown is the bottom box sides which have all the Kickstarter supporters on them.  Eventually I will look for my name.  If I used my Net handle I will take a pic of it in a later update. 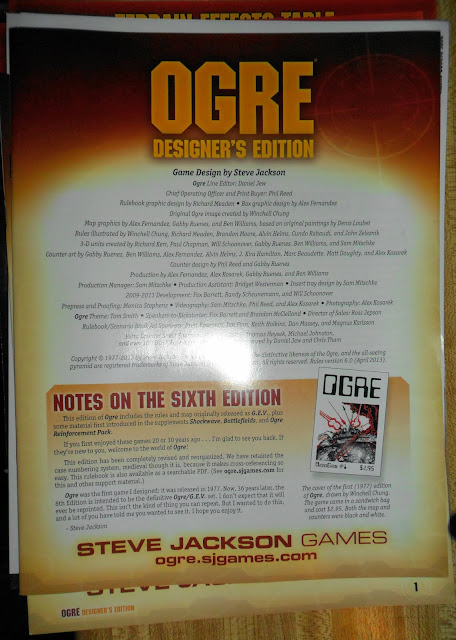 Main full color rulebook on top of all the other sheets included in a big zippie bag. 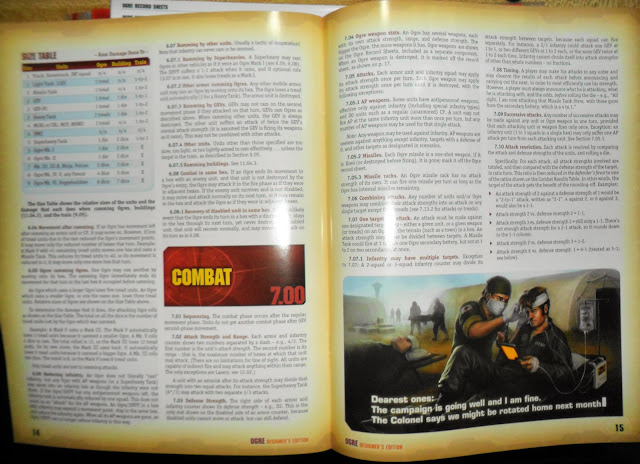 Full color.  Nice art.  The people look like actual gamers who were drawn in the manual or something.  I could go check the Kickstarter page to find out for sure but I don't feel like it. 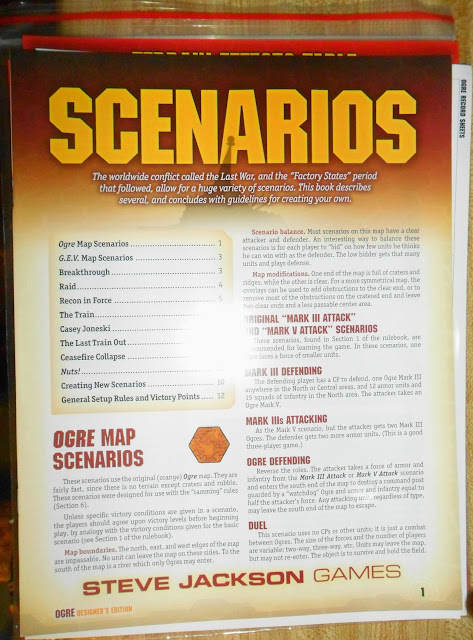 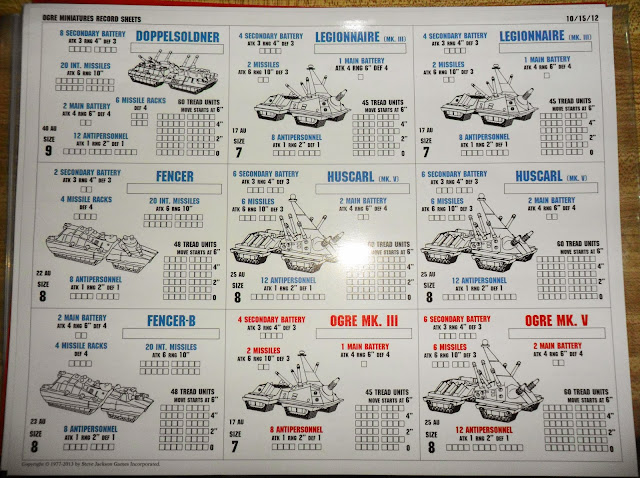 Two double sided sheets of what looks to be dry erase record sheets if you don't feel like downloading the Ogre app online for your favorite tablet. 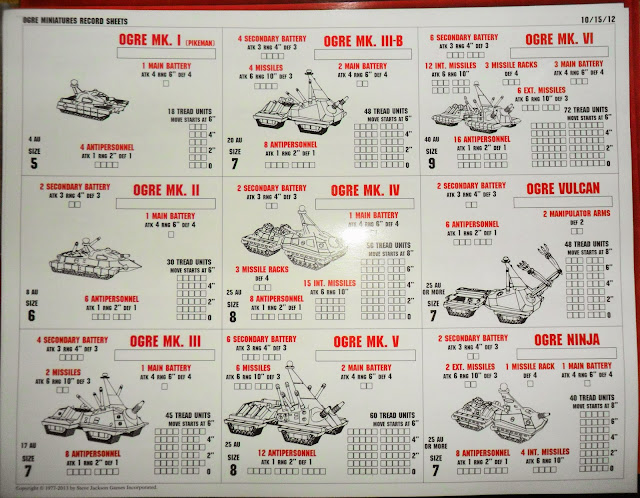 The other side full of Ogre-y goodness. 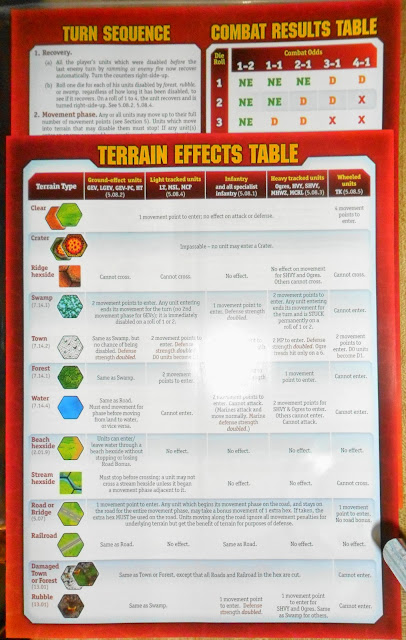 The two reference sheets included.  Showing one side here and part of the other.  This is like a third of what I can post about Ogre so it is getting long enough for one post.

You seriously underestimate the appeal of Munchkin mang.

Still, I shall probably grab a buttload of those cheap ones to hand out at cons myself, just because.

Munchkin has an appeal besides being terrible?

You are as bad as Sero. For shame.