Sick as a Dog. But Here is a Little Something to Tide Yall Over. A Toy Review and Comic

Massive Cold/Flu so bad one day I could barely stand for more than a few minutes at a time.  Has evolved to include my first ever case of Pink Eye.  Doing or continuing gaming projects has not been on the cards.

However I got a pair of exclusive toys at MSRP on Ebay today and am starting to feel well enough I had a minor bit of inspiration, so here is a quick 1 page comic and a super fast review of the products shown. 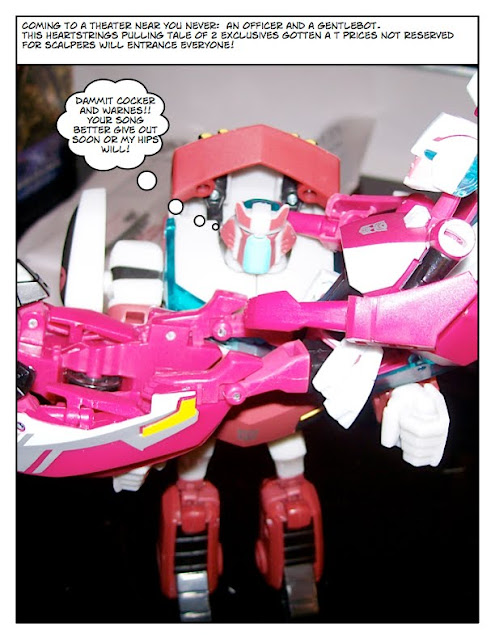 ("Who... knows what next cycle brings?  In a multiverse, few sparks survive.  All I know.. is the way I feel, and its real, I keep it online...")
Yes I grew up in the 80s.  Any of you from a similar time frame will get the reference.  You have no idea how tricky it was to get that pose to work.

Arcee: Her vehicle mode looks great outside of her hands pretty much being totally visible on the back top of the car.  Transformation was smooth as silk and quite pleasing.  Fast but effective.  Sadly she needs quite a bit of extra paint to look her best.  So far the best officially named Arcee Transformer, and even taking the 2 current Fan Company type products into the mix she sort of kicks their hind ends overall too.  (Being 10-15 dollars as opposed to 70-100.  And a lovely dark purple and not bright pastel pink.)  Good Robot Mode, Good Vehicle.

Both toys could have used a few more paint applications and both of them have a fairly decent amount of articulation.  One issue is they both have weapons and accessories that only somewhat stay on.  Arcee has wing spoilers and Ratchet has a pair of rear end vehicle mode bumpers that become chest type CLEAR BBZZT paddles you can put on his fists.  Both sets of accessories don't fall off at the slightest touch, but both aren't on there to the point they can't pop off with some casual fiddling.  Arcee also has a nice pair of clear blue swords that really hold into place in both her open hands and in their holsters.  (Which is something a 50 dollar Bandai Zeta Gundam Toy can't do with its weapons.  Yeah.)

Keep these issues in mind.  They are good toys, but not perfect.  A little customizing paint work and the odd nail polish joint tightening for their accessory mounts is in order if you want things to be the best.  I may do the joint bit for Ratchet's hips so I can possibly do an even more improved version of the picture above.  They are sort of kind of a couple on the show and it looks cute.

And watch Transformers Animated!  Its the second best Transformers show after Beast Wars.  And the Allspark Almanac books are the greatest love letter to Nerds who also love Transformers ever written!

Hopefully by next week I will be back up to spec and can produce some good gaming content once more.

Feh.  One would think all that proper hygiene and nutrition would keep such bad flu type things from happening..
Posted by Captain Rufus at Tuesday, August 24, 2010 No comments:

Someone explains art in a way that makes PERFECT SENSE

If you haven't heard, Roger Ebert (a movie reviewer I can pretty much say is a living national treasure and someone I wish I could write a third as good as) has gotten a lot of videogame fans mad because he has said (well typed as he can no longer speak sadly) games are not art.

Many people have tried to counter his claims.  Plus there have been a number of "shock" artists have tried to claim when they do disgusting things usually designed to piss off the political/religious right (a group you can piss off very easily.  Hell.  Just be a non WASP and say anything at all!)  that honestly even a more relaxed person like myself think are really over the line if not outright MESSED UP.

Well the online version of one of my favorite indie comics, Serenity Rose (which I so need to review here one day.  Call it kind of hipster Hot Topic if you will but I adore it.  ITS SO GOOD!) has this little once a week thing where one of the characters of the story answers questions readers email in from the perspective of her reality.

Her definition of art just fits and makes perfect sense.  Art evokes an emotional reaction.  Its why a drawing can be technically amazing yet seems to fall flat.  Its not giving any emotion out of it.

This of course means even crap can be considered art even if unintentionally.  While I really liked Star Wars Phantom Menace, many people hated it as if Lucas came down from up high and kicked them in the junk.  It evoked a reaction out of its viewers, albeit one I doubt the Flanneled One actually intended.

(Though its probably a topic for another time, but sometimes I think the things the Internet hivemind SAYS SUCK AND IF YOU DON'T AGREE YOU ARE WROOOONG as mocked in this brilliant Onion article: ( I might have linked this before but its too good not to use again. The irony of the post and some of my own tendencies is not lost on me. ) are taken too heavily as fact.  As huge as the Net is nowadays, angry ranting Internet people, myself included don't amount to a hill of beans in what people in general think about something.  Just don't tell the Fallout 1-2 fanbase this.  According to them Fallout 3 is digital Herpes or whatever in spite of the fact its sold mad amounts and I have yet to meet a REAL person who didn't enjoy it.)

So can a game be art?  Absolutely.  Even some of the horribly abusive NES games like Battletoads and Ninja Gaiden are art.  They cause massive amounts of rage in players.  Yet something like Phantasy Star 2 or Ultima 5 are a more positive form of art as they evoke feelings of isolation, sorrow, and determination as you press on with the game to try to save these fictional pixels.

We can say the same with tabletop gaming.  A really good intense campaign is certainly a form of art.

Now technically this means almost anything can be art.

I am comfortable with this.

A breezy Spring day without a care in the world?

Catching one of those damned Metal Slimes in Dragon Quest before they run off and getting their sweet sweet massive amounts of experience points?

That perfect tackle of a top rated Quarterback in the team you love to hate by an underdog?

Someone's ridiculous statement online causing you to get all bent out of shape till you realize how STUPID you were even caring about what some random person thought about something you like?

A perfectly made Irish Coffee?

That first kiss of someone you love you haven't seen in quite some time?

Sometimes its rough and painful, but lasting art is always a strong emotion you remember good or bad.

Something to think about.
Posted by Captain Rufus at Thursday, August 12, 2010 No comments:

See, this is a problem with gamers I really need to devote a whole post to one day.

How some gamers are REALLY antisocial about playing other people, trying new games, and don't seem to have the slightest interest in doing anything outside of what they already are.

Take this from personal experience.  Playing in a tiny group in a private venue is a guarantee of eventual no gaming.

People who are willing to try the game usually really really like it.  But it has been hard to get people to try it.

Thankfully I have been a playing at Arkham Asylum the last few months (even if the guy I went down with to try to recruit folks has gone MIA) since one of the clerks really enjoys trying new games (he isn't from the region which is why he is actually SOCIABLE to a larger degree than the regular New England Gamer) and it helps him from the tedium of endless D&D 4th ed and Magic games.

Its also good to have potential product diversity too.  You never know when an existing market may cool off or even go out completely.

People really wanted more info.  Instead of being put upon for people asking questions, I was happy to answer as much as I could, even if it slowed the game down.

And as I was consistent, now there is even more interest and more desire to show off the game.

So this week I had a light scenario to show off the game, using smaller, simpler forces. 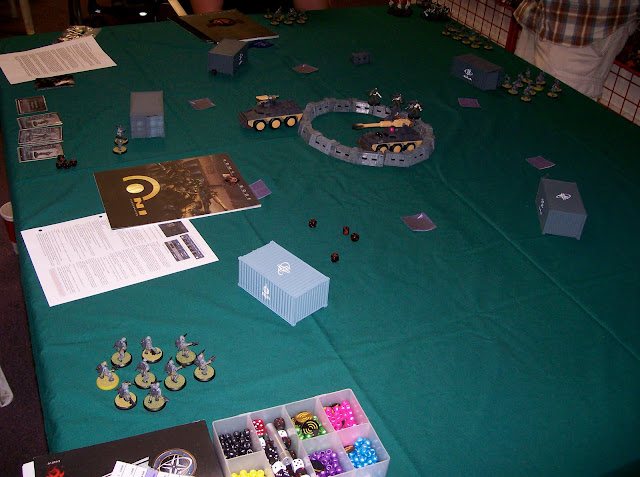 I prepared as much as possible before the game with prebuilt armies, and even a little scenario.  If I was capable of getting my butt out of bed on time and stop looking at stuff for random reasons I would get even more going better and faster.

(Today's stupidity was half awake model kit investigation and reorganization.  No I do not know why I needed to spend a good 30-45 minutes in my undershorts looking at my model kits instead of just getting up and getting ready to go.)

The scenario I came up with was pretty good and lots of people were oohing and ahhing over the game. And some folks even LIKED the idea of prepainted figures since Arkham doesn't really have a big active minis group.

Third biggest Friday Night Magic participation in the country most weeks, but not much minis gaming.

So the lack of Games Workshop fanboyism and painter elitism actually HELPED in this venue.

Of course, exploding zombies is always popular too... 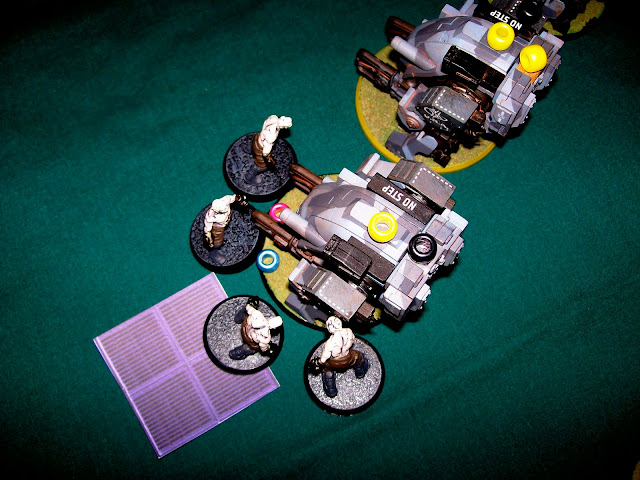 (Zombies from underground grates try to blow up my poor Fire Toads.  Durka Durka Romero Jihad.)
So people are asking for more demos so they can give it a shot.
Thus I am building some simple forces for next week if my casino overlords don't have me scheduled to work.
I showed off my UNA, Oni, and Red Blok armies, so this week I will show off my remaining two: 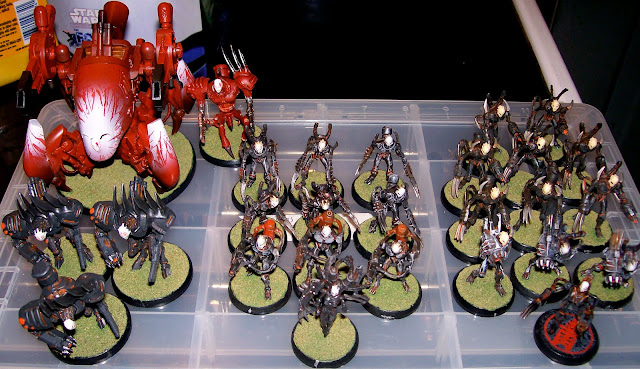 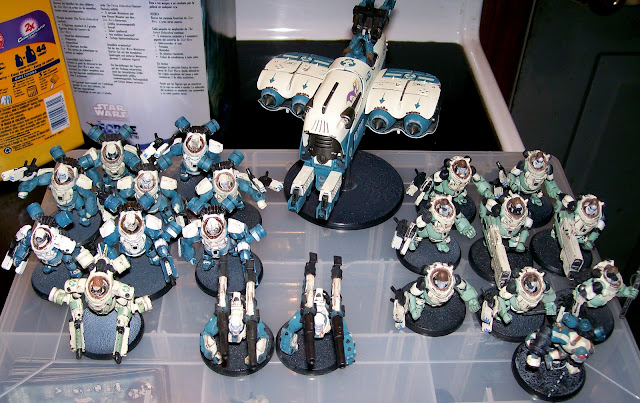 And the Karmans, also with 2000 points of HOT.  MONKEY.  LOVIN.   Also 2K points in 4 units.
But because its a demo and training game I am trying to make it smaller forces as to not overwhelm people or take too long to play.
So let's see how it goes.
But what am I learning of getting new players of the gaming sort?
1:  Play multiple times consistently at a PUBLIC gaming venue.
2:  Be friendly and welcoming, and willing to answer questions.
3:  Keep games smaller and simpler as to not be overwhelming.
4:  Be willing to offer interested parties the chance to play, if not this time, the next one.
5:  Have plenty of things folks can look at.
Posted by Captain Rufus at Thursday, August 05, 2010 3 comments: