First off a toy related bit.  After years of collecting and months waiting for them to come in, I now have a complete and amazing Transformers Bruticus, made up of all small run collector's oriented toys.

See during the Transformers Energon line they made a couple combiners based off the concepts of the old 80s "Scramble City" concept where there was one big body bit, and 4 interchangable limbs.  The Energon toys refined this with poseable figures, no extra parts that didn't store on the figure somehow, and even the combiner could pose about.  Sadly these toys only sort of combined with generally terrible hands and feet doing secondary duty as equally poor looking weapons, and each combiner team was really 3 figures, each limb being just 2 different paint schemes.

From time to time since they got reissued, sometimes with better paint schemes, but still sucky.  However the Transformers Collector's Club in a way to not make their 40 dollar a year fee seem completely a waste of money gives you a 8-12 dollar value toy in an exclusive paint scheme every year for free.  For 5 years they did their own team using the above combiners, but with a long running story, and each figure having lots of lovely transparent plastic.  I subbed for one year, used their discount price for member's store (which basically makes in print toys MSRP, and the previous year's freebie toy 20 bucks instead of non member 40.) to grab the other 2 out, and a few months back stumbled upon the limb I didn't have for 15 bucks.

Now Transformers has some third party companies making accessories if not their own figures out there, some of which blow anything Hasbro (TF's parent company outside of Asia) can do, albeit at a 2-4 times price markup of what an equivalent toy would cost in stores.

They decided to improve one of the combiner teams, the Combaticons who form Bruticus.  Not just with parts, but 2 whole replacement figures, being the Space Shuttle Blast Off, and the Jeep Swindle.  For 48 dollars a figure.  Figures who without all the accessories and being from Hasbro would be 8 bucks.

I still bought them.  They are AMAZING renditions of these classic characters with some tweaks.  And the accessories.  Oh the accessories.  Each box with full color instruction booklet has 3 trays worth of moving plastic parts not just for use with the included Transformer, but for the other Combaticons.  Guns, missile racks, truck beds, you name it.  And all these pieces go on BOTH modes, robot and vehicle.

While waiting for these lovely money sinks I grabbed the main body commander bit. 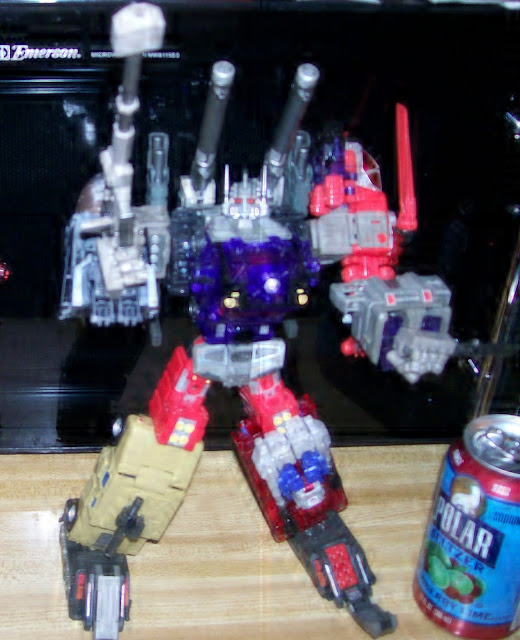 Thankfully the grey of the combiner/weapon bits meshes well with the primarily red and blue and grey of the TFCC pieces.  And in spite of my less than optimal photo, you can see its big.  And amazing.  Every weapon has moving parts in it, the main AT rifle going down to a smaller size.  The combat knife is an axe for Blast Off.  The feet are both truck bed parts with moving wheels AND as you see they have hidden missiles in them, turning this massive death machine into the universe's most bad ass Jester.

Like in hobby gaming its mostly small companies that really provide fans with what they want.  You just pay a premium for it.


Next up is a bit of gaming.  I got to play some Formula De this week.  (I plan on reviewing it eventually.)  I not only won, but I was vindicated for something an ex friend insulted me with a number of years ago.

See Formula De is a Formula 1 racing game where you have various dice as your gears, and damage points for things like braking, taking turns too fast, downshifting multiple gears, ect.

In 2-3 lap races you can take a pitstop to take care of such damage, in some cases not really losing any time whatsoever.  (Unlike in real racing where you are gonna lose some position even if its just a quick fuel and fly.)  In the official rules you can effectively enter at top speed no problem and possibly leave, still head of the pack.

I remember playing the game and this came up.  I make a small comment about how that seems unbalanced.  My ex friend (and this action is the LEAST of his horribleness) starts YELLING at me for saying it, that I am just whining and don't know what I am talking about and I always do this.

Of course he was always the sort to find any broken advantage in any game ever and you could NEVER EVER EVER remove any unfair advantage he may have discovered.

Going back to playing it with an experienced player I bring up the pit stops being kind of broken and he told me, "Yeah I have houseruled that.  You can't go in at 5-6th gear anymore".

I like when I am vindicated.  I do have a pretty good eye for broken or unbalanced mechanics.

(Games Workshop on the other hand?  Not so much.)


And my final bit of news is that I may actually be in a REAL RPG CAMPAIGN and not the fast food D&D Encounters styled Gamma World game that replaced the D&D Encounters campaign when we all got tired of it.  (Though its a different day so I will probably play both.)

And what is it?  FASA STAR TREK.

A game I bought on a lark a few years back I might finally get to play.  Reading through it and its both impressing and disappointing me at the same time.  Its full of fluff and information on the universe, something a different game I am also reading (Robotech Shadow Chronicles) fails at.

But that seems to be a problem with Palladium in general.   When they want to, they can write some compelling background and adventure seeds.  Most of the time its just a laundry list of new weapons.

The disappointment in Trek comes from the involved character generation that involves basically tracking your character's entire Starfleet career till they are skilled enough for whatever role the campaign needs them for.  The example character is in his late 40s!  Its a bit much to have to roll or expect a new player to do.

We will see if its 9 tables of generation works better in practice than on paper though.  It still makes more logical sense than Warhammer 40K RPG/1-2nd ed Warhammer Fantasy Roleplay. 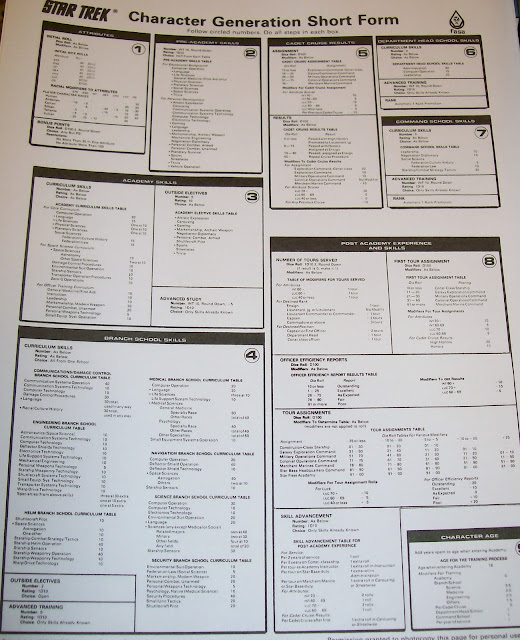 (Involved?  9 Steps?  Its an 80s game alright!)
But unlike those games I bought into alongside others who were usually the ones to bring it up in the first place, FASA Trek should at least get played for a bit, while GURPS, Starfleet Battles, Warhammer Fantasy Battles, Star Wars Saga Edition, and Pirates of the (Locale Here), World of Warcraft CCG, and 2 different Star Wars CCGs sit around as reminders why most of my friends are horrible people.

And lets end this selection of stuff with some not just good news but GOOD NEWS.

Ogre Sixth Edition!!!  Big Steve Jackson has decided to do a product other than the endless Munchkin rehashes that form the foundation of his company's profits.

(I'll leave out opinions on the man himself, which from most people seem to be entirely negative.  In this case I am approving of what he is doing.)

Full color big box game with a reported TWENTY ONE SQUARE FEET OF CARDBOARD.  Its gonna be nearly TWELVE POUNDS, containing the rules from both Ogre and the expansions GEV, Shockwave, and some additional things.  (I doubt the long unreleased Ogrethulhu rules will be one of them.)

Look at part of the sell sheet showing what it is slated to look like: 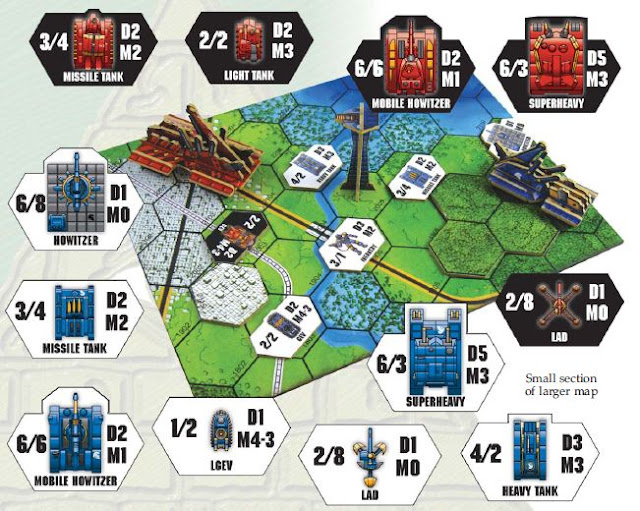 Its gonna be awesome.  Ogre is one of my favorite games and this edition is a must buy.

Though its gonna hurt.  About 100 dollars, extremely low print run that might not even make it to stores.

But oh lordy do I so want it!
Posted by Captain Rufus at Thursday, March 17, 2011 No comments:

In a brave new digital era for Wargame Dork I have gone video.

Video without Full Spectrum Lighting, but my first video nonetheless.  Nearly 20 minutes of review about this 70 dollar box of awesome, and some photos afterwards.

What?  I was gonna miss out on using comics?  On this blog?

And the picture supplemental: 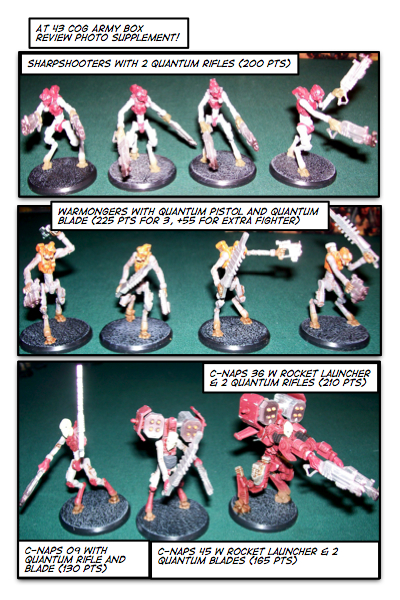 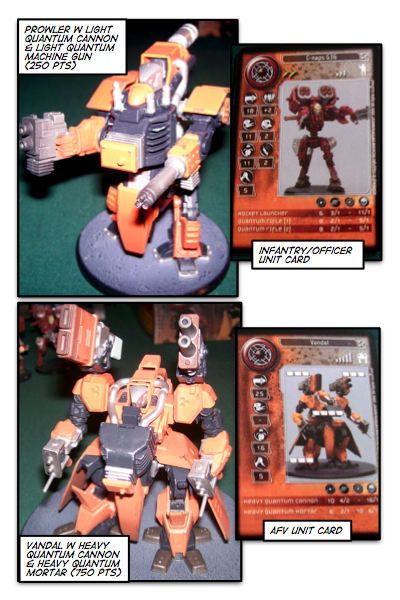 I've entered a new horrible era of this blog.  One where you are all forced to not only see my silly comic reviews, but endure 480p widescreen Youtube videos.
Posted by Captain Rufus at Wednesday, March 09, 2011 No comments:

The Tao of Blood Bowl (And Wisdom for Other Such Games)

Over at Something Awful there is a fine discussion thread for the Blood Bowl computer game, currently in a sadly download only Legendary Edition.  (As an owner of the previous retail version I got 33% off the new one which almost mitigates it being virtual.  Going from 9 teams to 20 helps a LOT.)

One fellow was lamenting the random chaotic luck inherent to Blood Bowl.  Which like many of the Games Workshop campaign system games (BBowl, Necromunda, Mordheim, and Gorkamorka) isn't exactly perfect, and sometimes leads to losing your entire force due to simple bad luck instead of keeping more experienced forces from completely dominating.

This was some of my thoughts on Blood Bowl's random dice madness and dealing with losing or even just simple gaming frustration:


Some things to think about.  Hobby games are supposed to be fun.  Most of them aren't perfect, in many cases NOT EVEN CLOSE.  But you gotta WANT to have fun or you won't have any.  But if the player base is terrible, or the game isn't to your taste, step back.  Maybe you need a break from the game or its community.

Or maybe you just need an entirely different game or group ENTIRELY.

It took me many years to learn that, in many cases playing with certain people and groups was making me miserable.  I wasn't happy at all.  Heck in some cases, people have ruined certain games entirely for me.

(Hero Quest, Jyhad, Lord of the Rings Miniatures, New World of Darkness, and Warmachine for examples in my own sad history.)

It might not even be the games' fault but my memories are completely tainted.

Instead of staying with those games or the people that ruined them, I got the hell out of dodge, in some cases selling it all off on ebay to buy things I can enjoy and have a good memory for.

Sure I might not be gaming anywhere NEAR as much.   But in its "Stopped Clocks are Right at Least Twice a Day" way, some folks on RPGnet had a good bit of wisdom:  "No gaming beats BAD gaming".

Something to think about.  In some cases it just might be the audience, or maybe even the game itself for you and your preferred style of play.

But why make yourself miserable just to play something that is supposed to be fun?
Posted by Captain Rufus at Friday, March 04, 2011 No comments: