Well this WAS going to be a single parter but in preparing for it I realized it is entirely too much for one post.  In fact it might take THREE.  Maybe.  As is it is 11 months late.

Last year we covered the best Star Wars RPG ever made if not one of the best RPGs ever PERIOD, the West End Games D6 version.  Now in the age of the prequels and the massive dominance of the D20 ruleset used in Dungeons & Dragons 3rd Edition Wizards of the Coast had gotten the Star Wars license helped out by their being owned by giant IP swallower that is NOT Disney, Hasbro.

I was at least a LITTLE bit excited.  Everyone plays D&D and the Prequel trilogy was starting up.  Now there would be almost zero reason for folks to not play Star Wars as the normal excuse of "Well I would have to learn a new game" was now dead.  If D&D was great being able to play in the giant galaxy of Star Wars would be even MORE GREAT.  No longer stuck being murderhobos going into dungeons on planets who somehow were an odd pre Renaissance Lord of the Rings technology level but with dozens of sapient races and massive amounts of fauna and flora capable of snuffing out said races before said races could even do it to themselves. THERE WERE NOW WORLDS TO EXPLORE AND SAVE over tons of different environments and cultures and technology levels with a timeline vast enough to allow for just about anything.

PLUS ITS GODDAMN STAR WARS.

Sadly, as always the RPG playerbase at large only wants bog standard D&D in usually whatever edition is currently in print and ONLY in as close to generic Tolkienesque Fantasy but with Murderhoboing as possible.   No other settings in that system, no other systems in that setting.

I HATE HATE HAAAAAAATE this.  While I don't mind some quality D&D from time to time it has never ever been the one RPG I would want to play over any other.  In most cases it is merely me settling for it in the hopes that maybe people will become friends and be willing to try new systems and setting types.  This is largely a NO and as always my heart and soul get broken.  It is also why I have basically given up on tabletop RPGs at this point in my life.  Given my schedule, social circle (IRL so small as to be practically ZERO), and what I want to play or run I have just given up on RPGs.  (Something about insanity being doing the same thing and expecting different results.)  And at this point the people who do really want me to run anything still have extremely limited tastes and it would have to be online which I have never enjoyed doing.  (Although running something like D6 system or other lighter systems would work much better probably.)

But I was still somewhat hopeful back then and gave WOTC a shot.  It did not go over well.  It only made my hatred for RPG players in general grow and the best thing I can say is it showed me how I should have dropped out of a number of groups sooner than I did.

Anyhow, let's see what I have for the early days of the WOTC license eh?


(You know the drill. Click for larger images if it is your thing.) 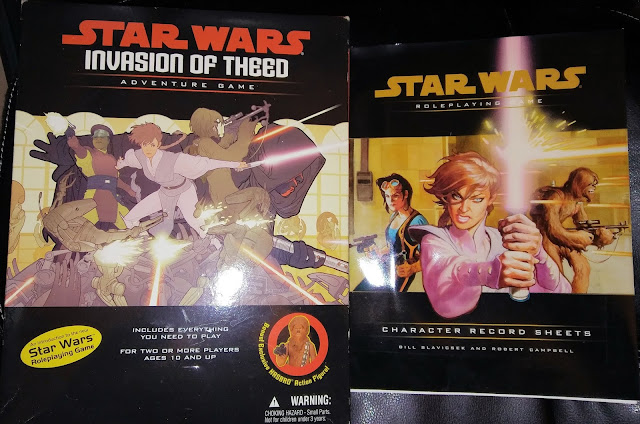 We start out with a starter box that came with a Wookie action figure to maybe grab collectors of SW stuff to maybe try an RPG and also the character sheet pack.  As is kind of obvious the early WOTC SW was prequel based more than Original Trilogy (OT) though it fully covered both.  Like D20 D&D it was heavy on battle map combats but in this game's case they had action figure scale to use all your toys. 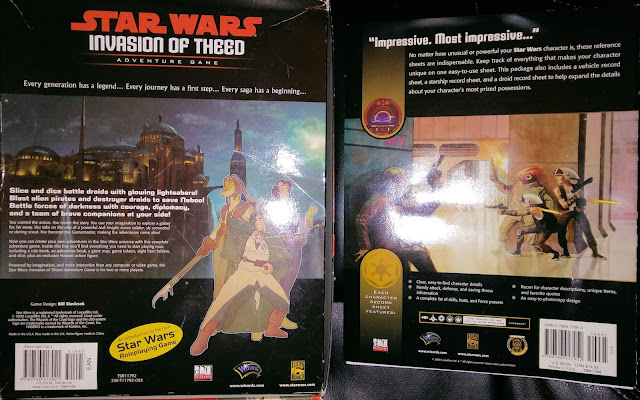 I really do like the art in the Theed box it must be said.  The character sheet pack also shows the Era designation which gives you information on what point in SW history it can be used in.  Which at this time was a rather large array of novels and Dark Horse comic books in what was known as the Expanded Universe  (EU).  Disney got rid of 95% of the EU. 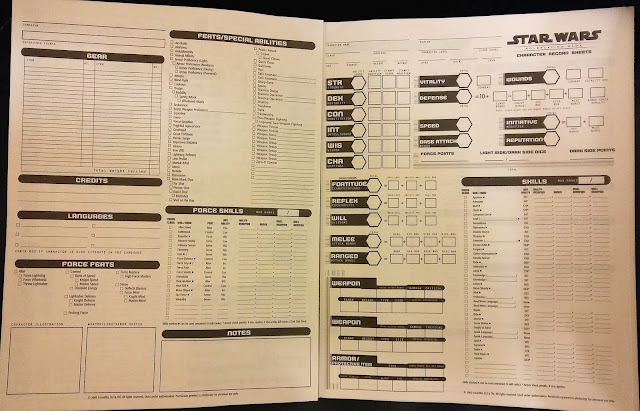 Our Mk1 character sheet.  The biggest difference between D&D and SW was armor worked much differently to the point of being useless (not too bad given how it normally seems useless in most SW media honestly..) and two HP systems as one was actual physical health and the other was the more abstracted D&D like value which rarely actually meant taking mortal damage.  Kinda. 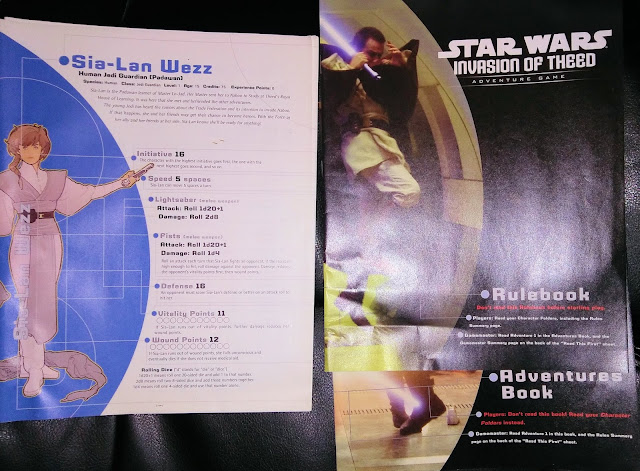 Besides the toy I think I gave away the box came with the character sheets, the rules, and the adventures plus a battle map to play on with counters I think.  This thing came out a good 16 YEARS AGO OH GOD I AM OLD. 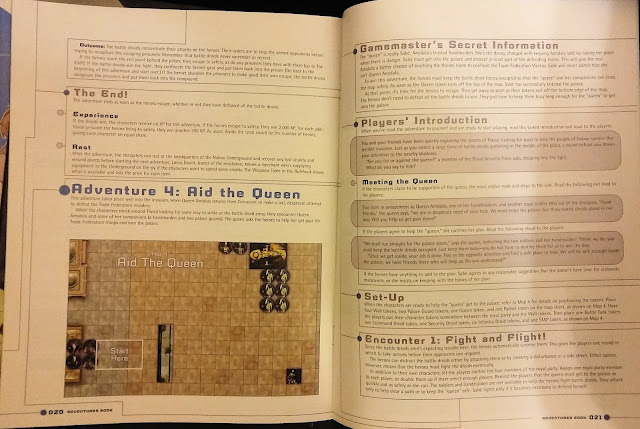 As is the normal case the starter set has simple adventure and scenario bits mostly based around combat stuff, in this case taking place alongside Episode 1. 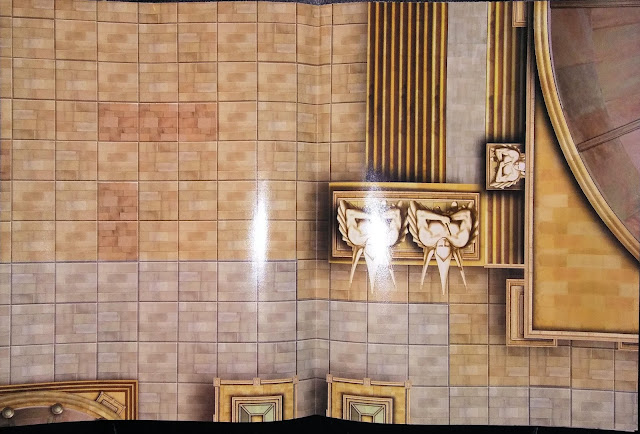 A bit of the battle map.  The other side is less fancy but in action figure scale. 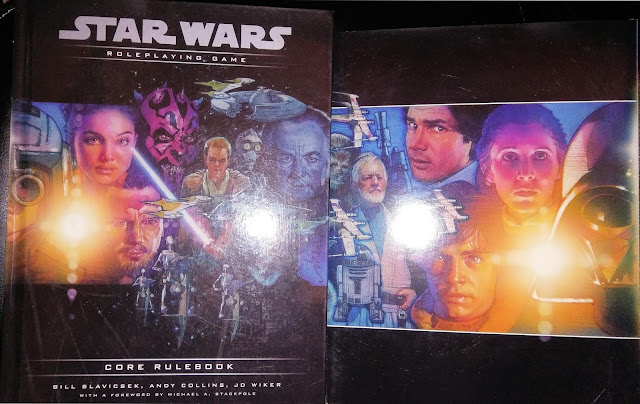 The main rulebook and part of the GM screen in this case showing the OT cast which is on the back of the Core Rulebook here.  (See what I mean?  They were aiming at the currently running Prequels more than the OT.) 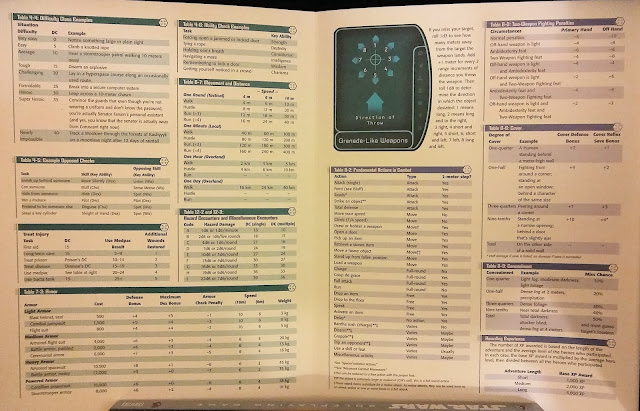 A bit of the info in the GM screen. 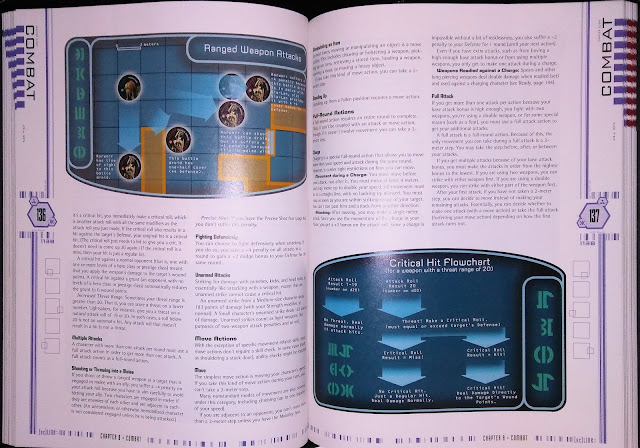 The rulebook is full color and quite large.  But the abstracted vehicle combat systems and the weird armor rules would not last too long. 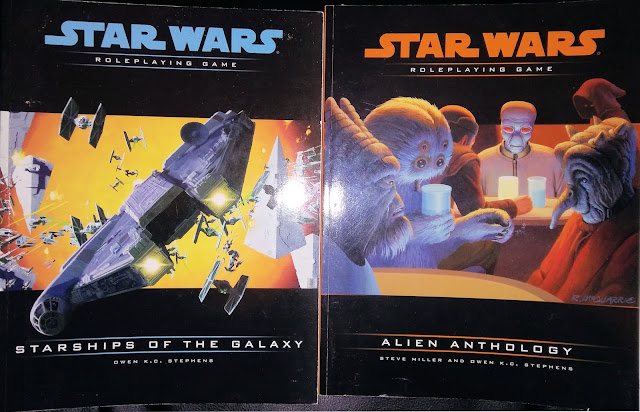 We also had some cheaper black and white (mostly) supplement books which were sought after for a while as they had smaller print runs and OMG ITS NOT DEE UN DEE meant less people buying them in the first place. 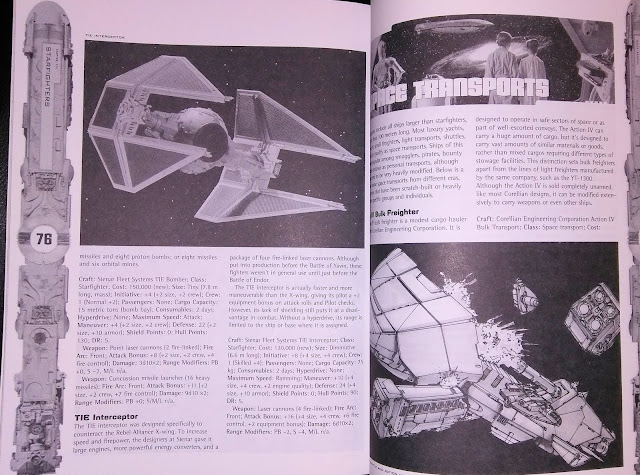 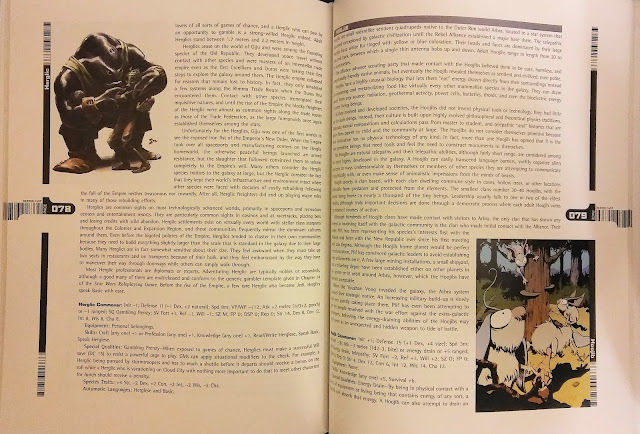 Yes at this point in time even the original Marvel Comics Star Wars series was mostly still part of EU canon.  Thus Hoojibs! 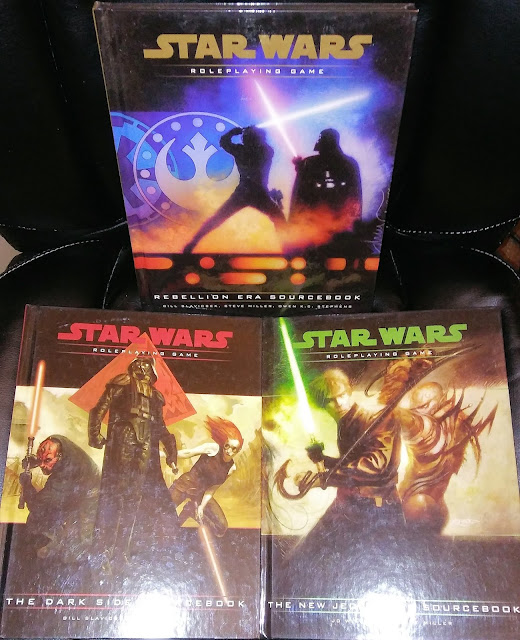 I didn't go too crazy on getting D20 SW stuff.  Rebellion Era was kind of a no brainer as was Dark Side.  New Jedi Order was more to see what the basic story was all about.  The answer to me was REALLY STUPID.  From all reports of the New Jedi Order series and what came after it was even worse.  So this book kind of helped me to see I didn't want to read those books. 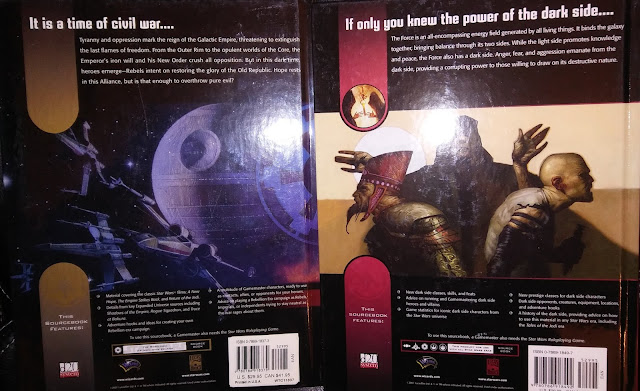 Showing the backs of two of them.  Obviously not the NJO one.  Also one can see prices and stuff. 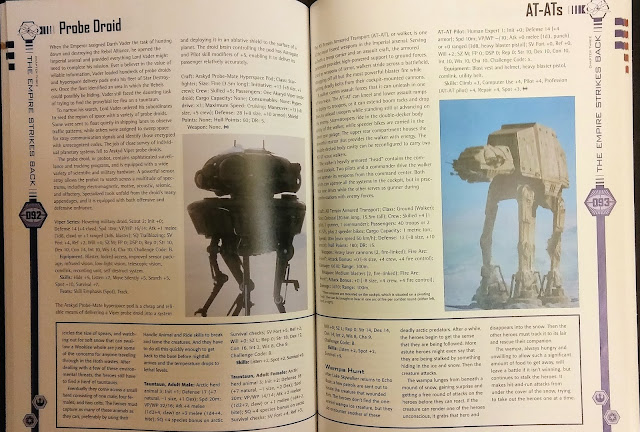 And a page of the Rebellion book with one of my favorite machines in Sci Fi on it, the mighty AT-AT!

But it didn't take off.  Between the uneven response to the first prequel, some of the wobbly rules, and RPGers mostly being snotty prats who only want their one precious game no matter the edition (although in this case people already had a fantastic RPG system I talked about last year in D6 so it had more hurdles!) it didn't make too many waves.

So around the time of the next (really really BAD) movie they did another mostly compatible go at it: 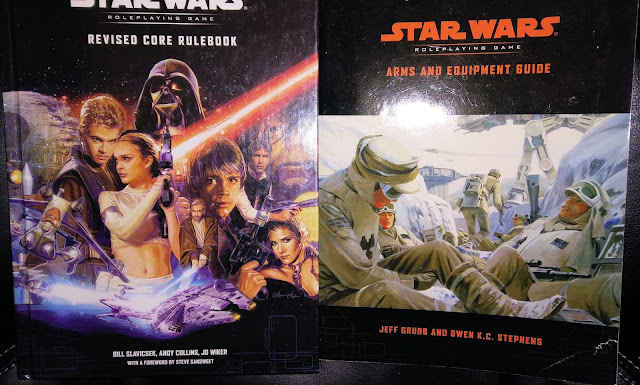 Now with all the movie stuff on the front cover!  They still made some cheaper supplement books though! 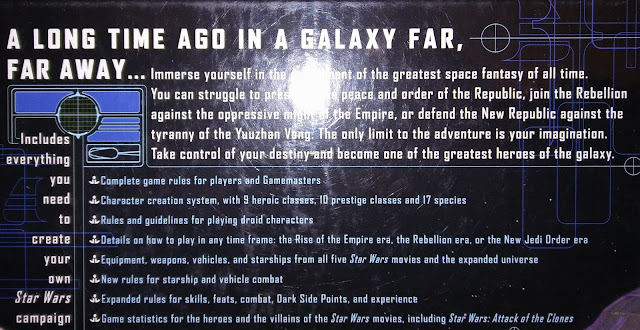 I would say if you wanted a D20 D&D Star Wars game that played like 3.0 and 3.5 they pretty much did it right this time. 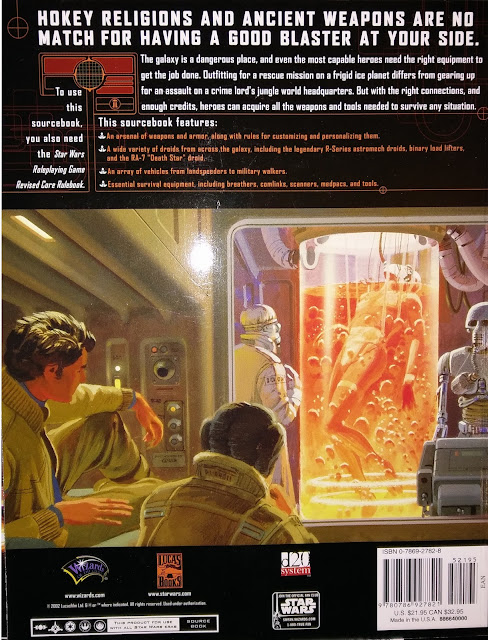 They also helpfully tell you its for the Revised edition.  Nice of them! 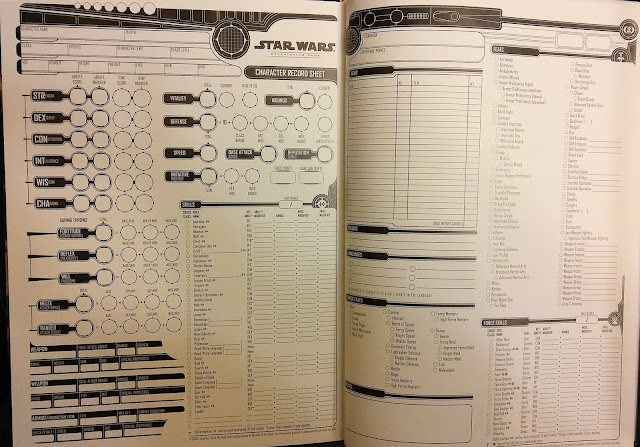 And our new character sheet. 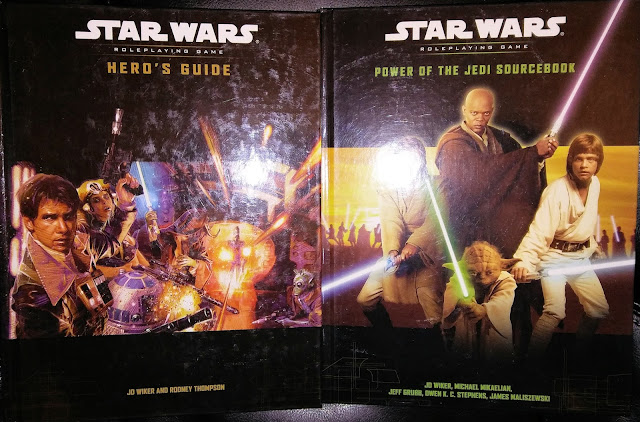 I again realized early on even with the fixes most people just weren't going to play it so I again did not exactly spend fat stacks on the game.

But the Hero's Guide back does show it was clearly doing the 3.x character building thing with piles of new stuff to mostly be there to kill stuff better or do stupid tricks if your GM decided to want more than just a combat game.   Basically Revised is more or less Pathfinder to Core's 3.0.

But again it didn't go over as well as Hasbro, Lucasfilm, and WOTC probably wanted it to.  But they had some folks working on the next edition of D&D so they had an idea on how to test a few things out with less risk,

Join me next time for SAGA EDITION, the Star Wars Gamer magazine, and possibly the collectible miniatures games depending on how big the next installment will be.  It probably won't have me whining.  (Besides, for all I know I am the failure.)
Posted by Captain Rufus at Saturday, December 30, 2017 No comments: