Yes.  Mechwarrior Online rocked out with it robotic crotch ER Medium Laser out over the last two months.  I have so much to talk about it needs to be two posts!

(This one covers the actual patches, the next one will pretty much be tons of screenshots and commentary.) 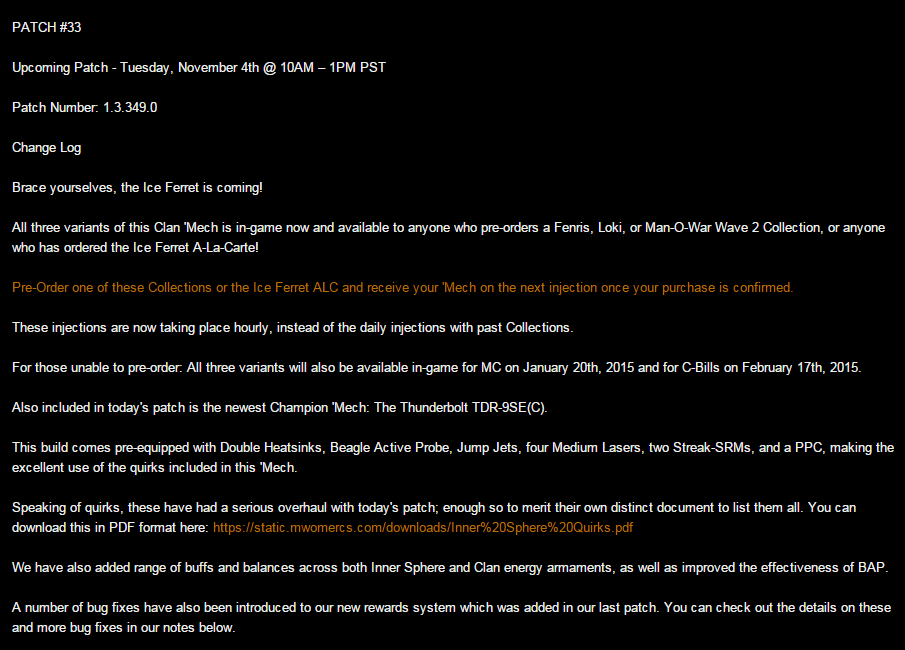 We start by remembering remembering the early something of November.  Ing. Quirks get another tweak pass and stuff is modified a bit. LRMs get a tiny debuff that doesn't stop people from spamming the things and AMS gets more ammo.  Nice.  Most lasers get a buff of some kind.  I approve. 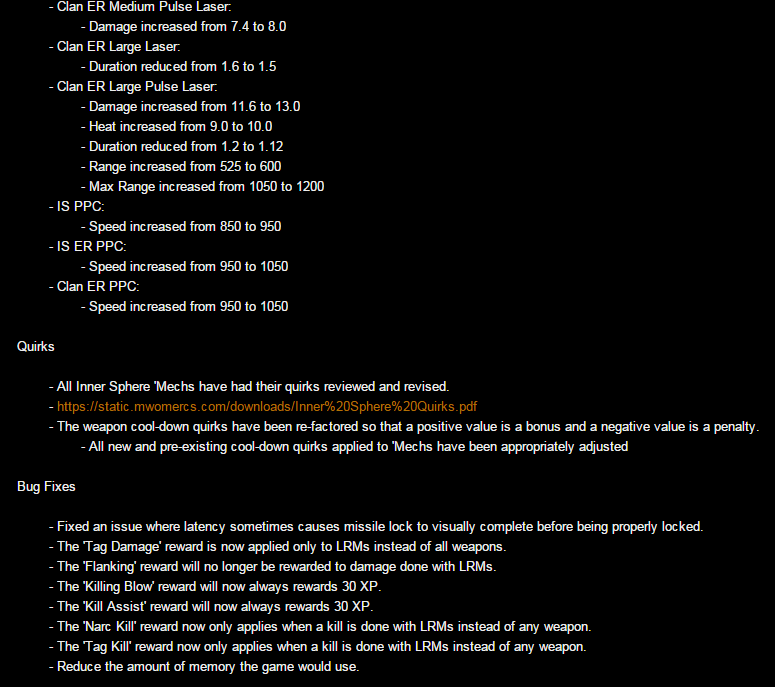 A good suite of balance changes.  Still doesn't keep idiots from hiding in their backfield and just spamming LRMs as artillery.  Which is boring. 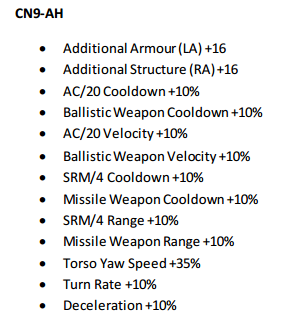 Here is an example of what Quirks do.  The freebie AH Centurion most of us suckers who spent money on the game got has these tweaks.  Quirks really make more mechs viable and encourage people to take more than just the "optimal" current mech of a size class with the same loadout.  It encourages variety which is good for the game.

Here is some of the GIVE US MONEY NOW PLEASE stuff these patches gave us. More Clan mechs to get.  Yay.  Sadly I can't use C Bills for the Loki to have a 60 ton Clan mech with ECM until March or so. 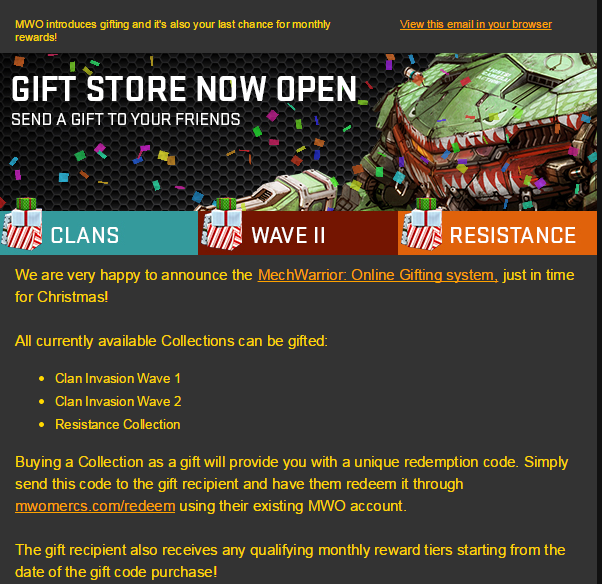 And now you can spend money on your friends!  THE GIFT THAT KEEPS ON GIVING.  (To PGI.  Money.) 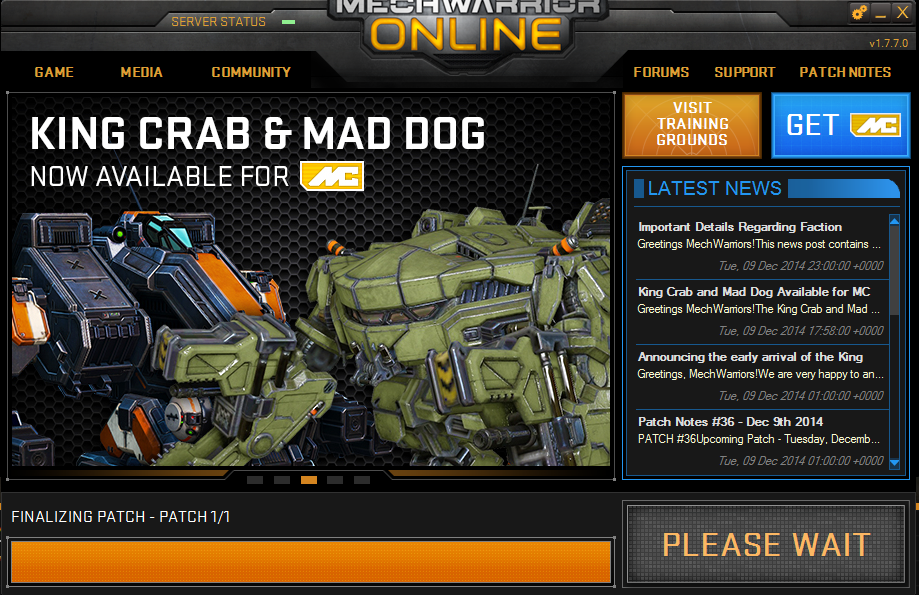 Now the Mad Dog (Vulture), and King Crab can be purchased with real money as opposed to just being reward purchase things.  I have already declared I will use C Bills if not real life money on King Crabs provided I can paint mine like Rampage from Beast Wars.
( http://tfwiki.net/wiki/Rampage_%28BW%29  http://tfwiki.net/mediawiki/images2/thumb/0/0f/BW_Rampage_toy.jpg/646px-BW_Rampage_toy.jpg ) 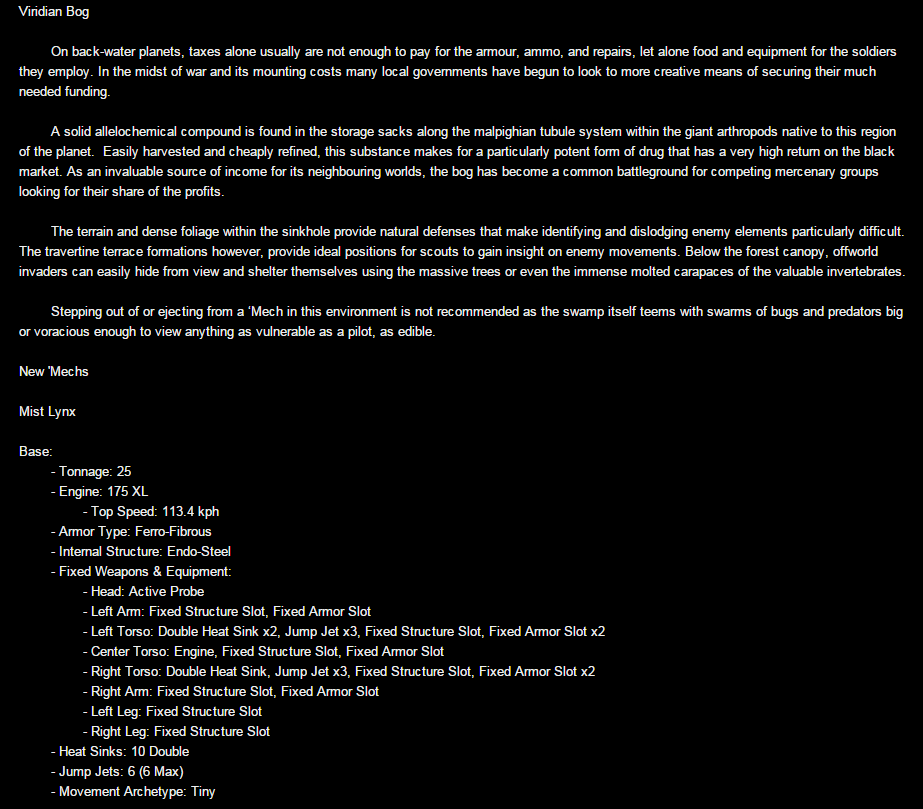 A great new map (see next post for in match pictures) and a 25 ton Clan mech. 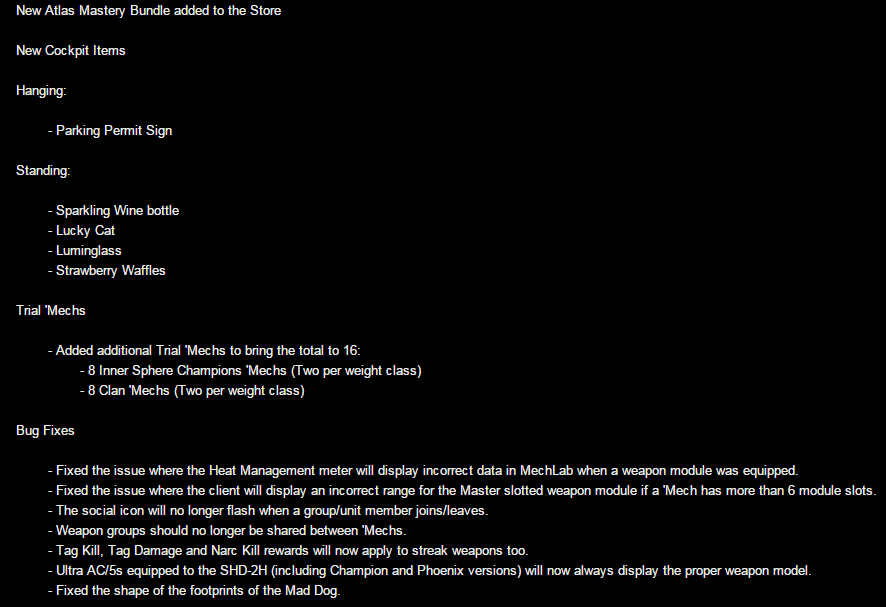 More fun but stupid cockpit items and some bug fixes.

The aforementioned Hellbringer (Loki) is here for real money and some other minor bits.

Not too thrilled with Beagle Probe getting a nerf but eh.  Sometimes you still gotta take it.  It just loses the HAVE THIS appeal it did for Streak Boats.

December had a double content patch then some patches to the patch. 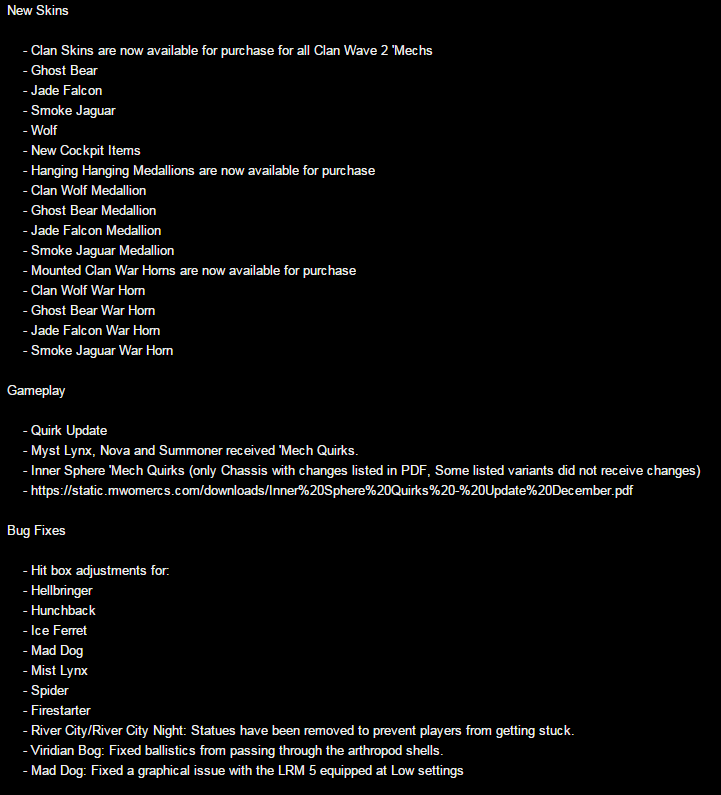 New cosmetic goodies to waste cash on and some more quirk stuff and patches. IS THE SKY FALLING? 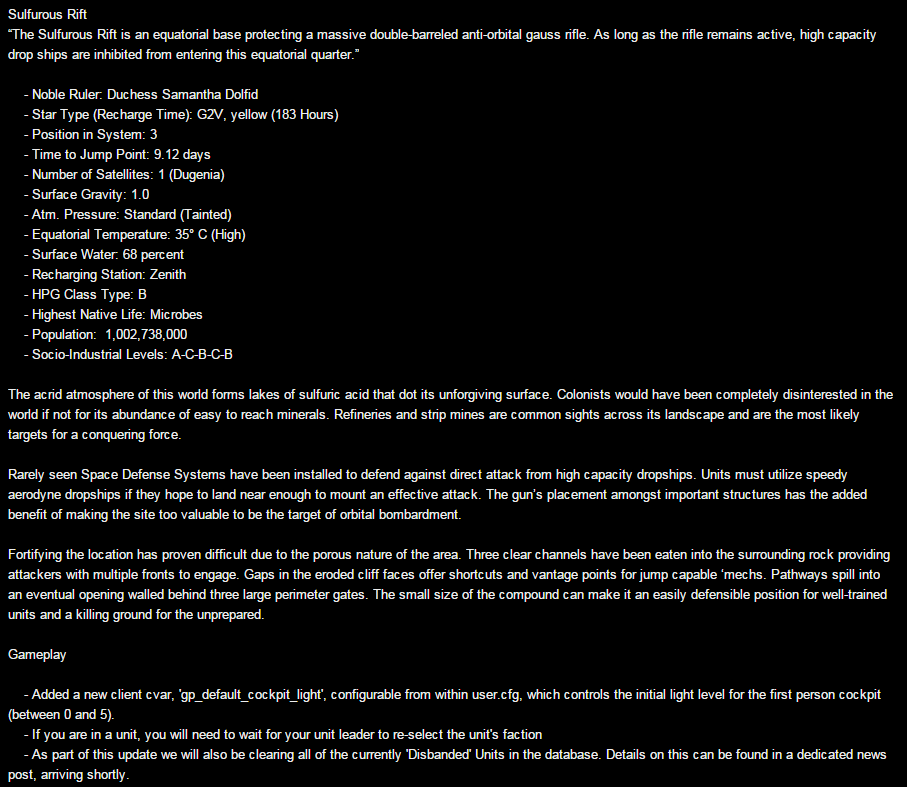 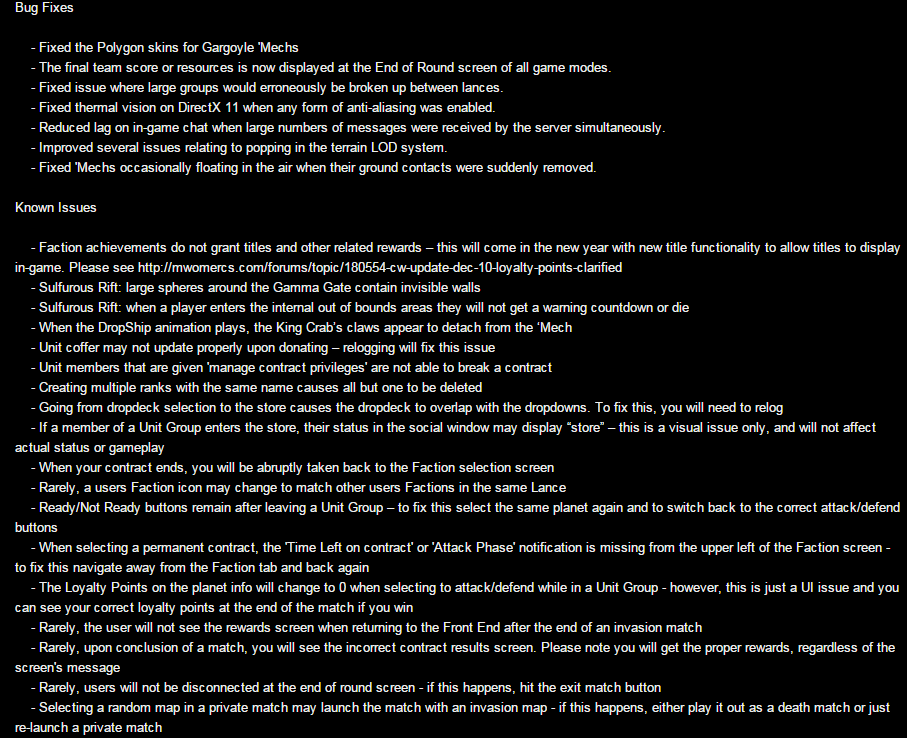 Join us next post (probably next week) for pictures and more info on the fun, lucrative, player bringing back,

Which is good because this game needed a shot in the arm.

Posted by Captain Rufus at Wednesday, December 17, 2014 No comments:

Like I mentioned in my Kickstarter rant http://wargamedork.blogspot.com/2014/08/kickshart-my-heart-or-why-kickstarter.html I had gotten into the Robotech RPG Tactics Kickstarter yet not only is it stupidly late (something most Kickstarter projects tend to be, and Palladium stuff is anyhow) but my picks would not only be later, but the damned game would be out at retail before my stuff came in!  So one of the local FLGSes had gotten in a shipment of the main game and a number of the box expansions, running around 36-39 dollars MSRP.  (Around 30ish shipped on ebay right now.) 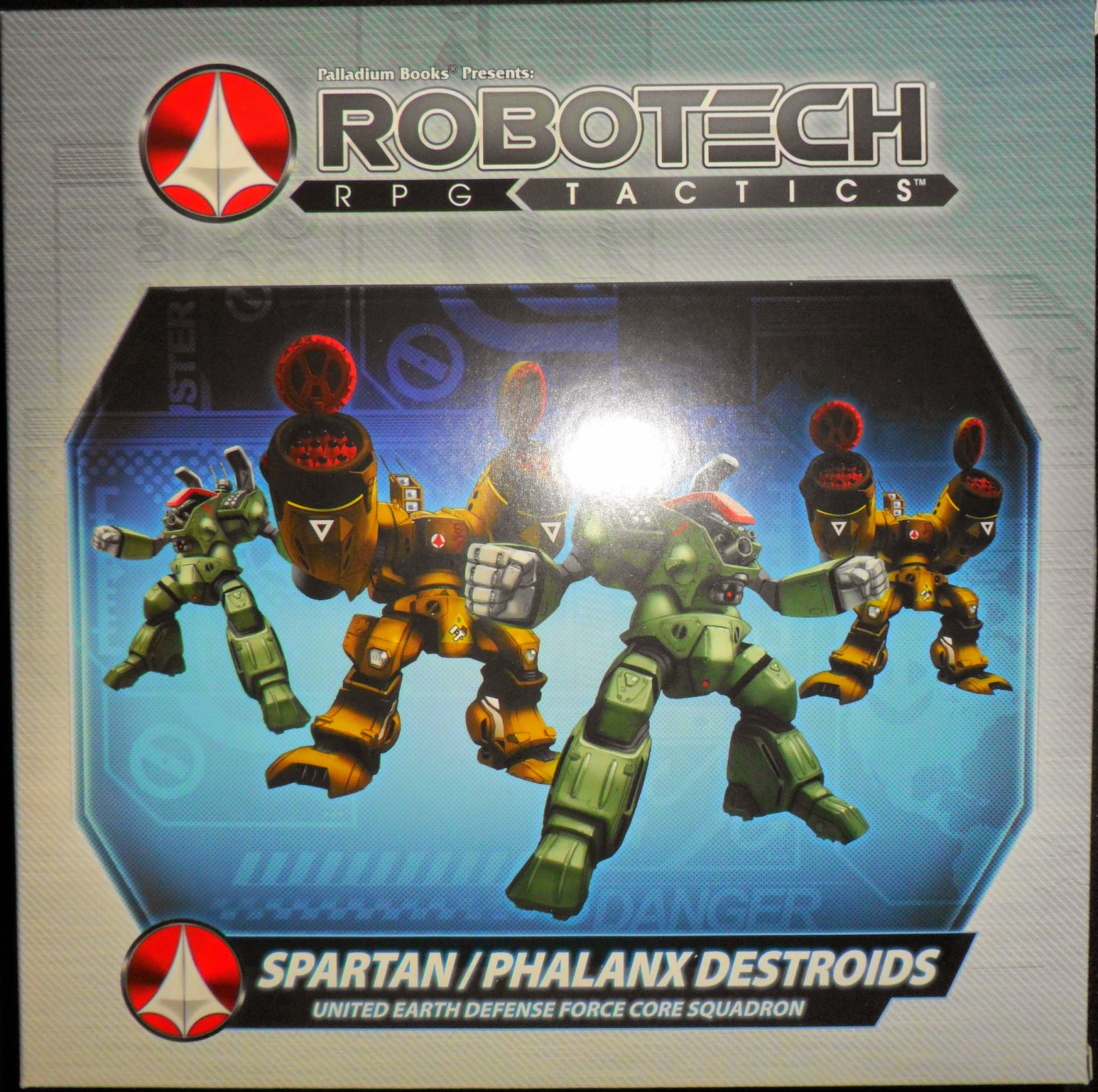 The box is kind of pretty enough. 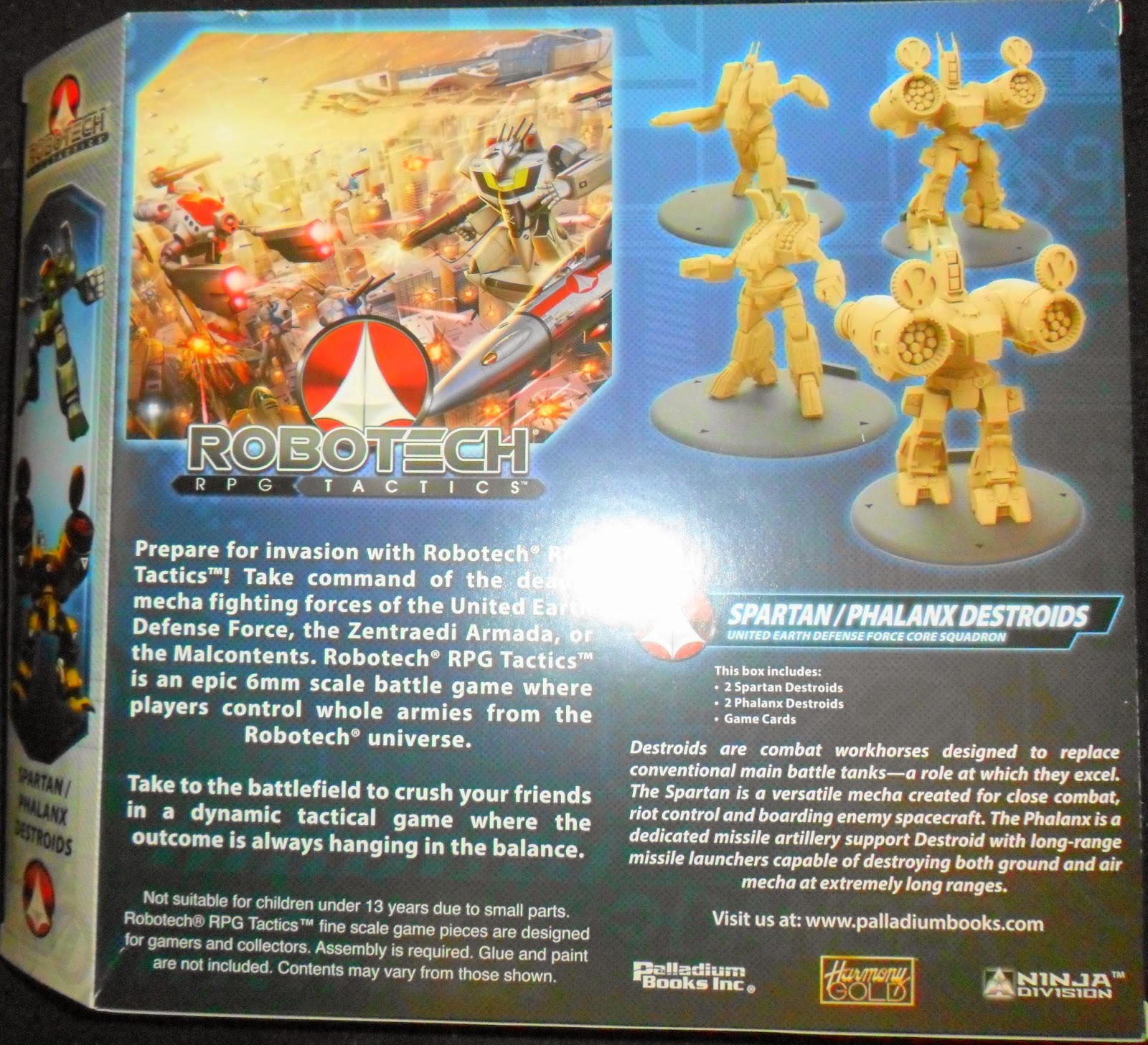 The back shows you what you are getting.  4 models, 2 of each chassis. 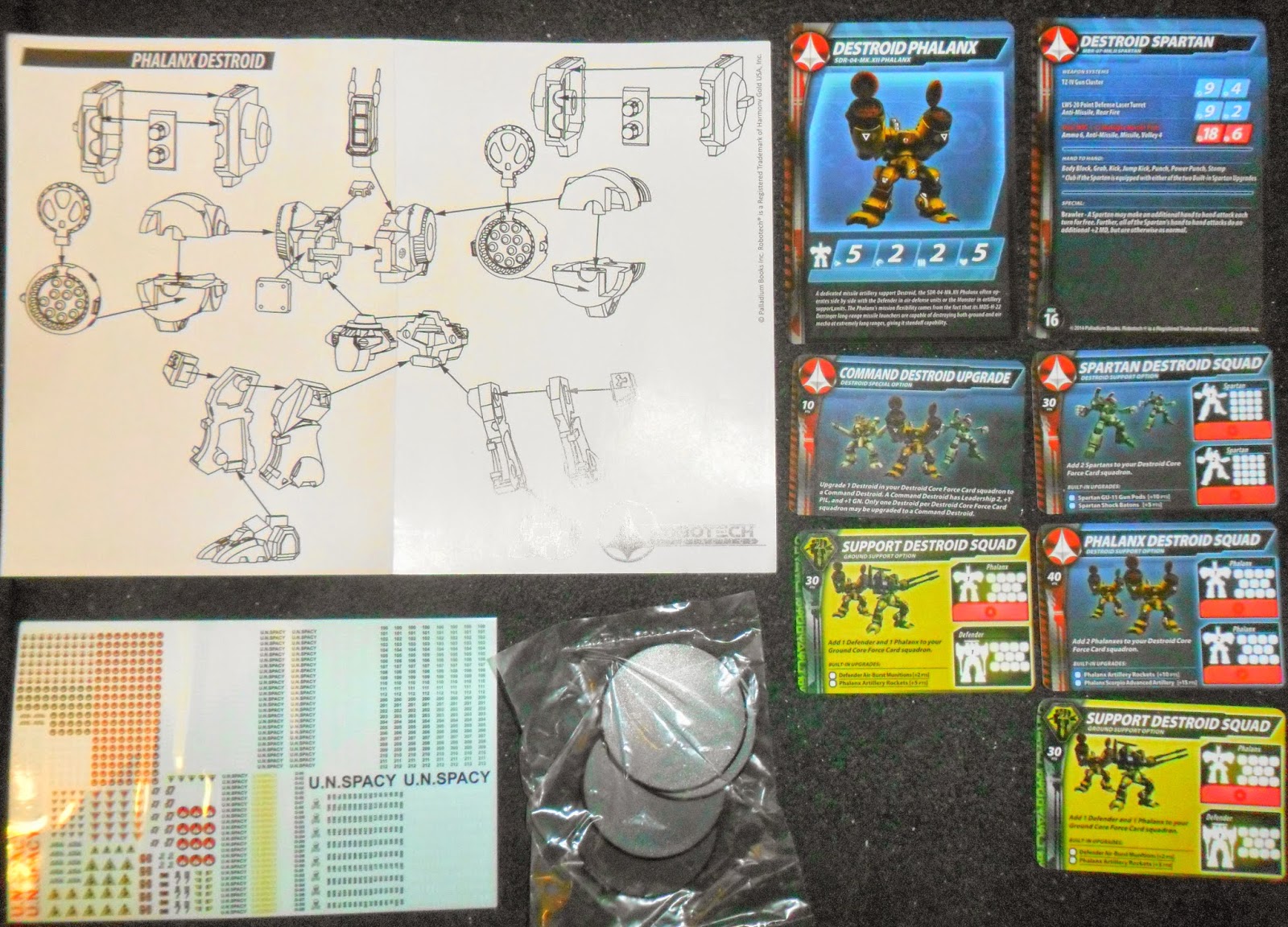 There is a helpful (ish) computer rendered instruction sheet, data cards, the bases, a BIG pack of waterslide decals, and squad cards. 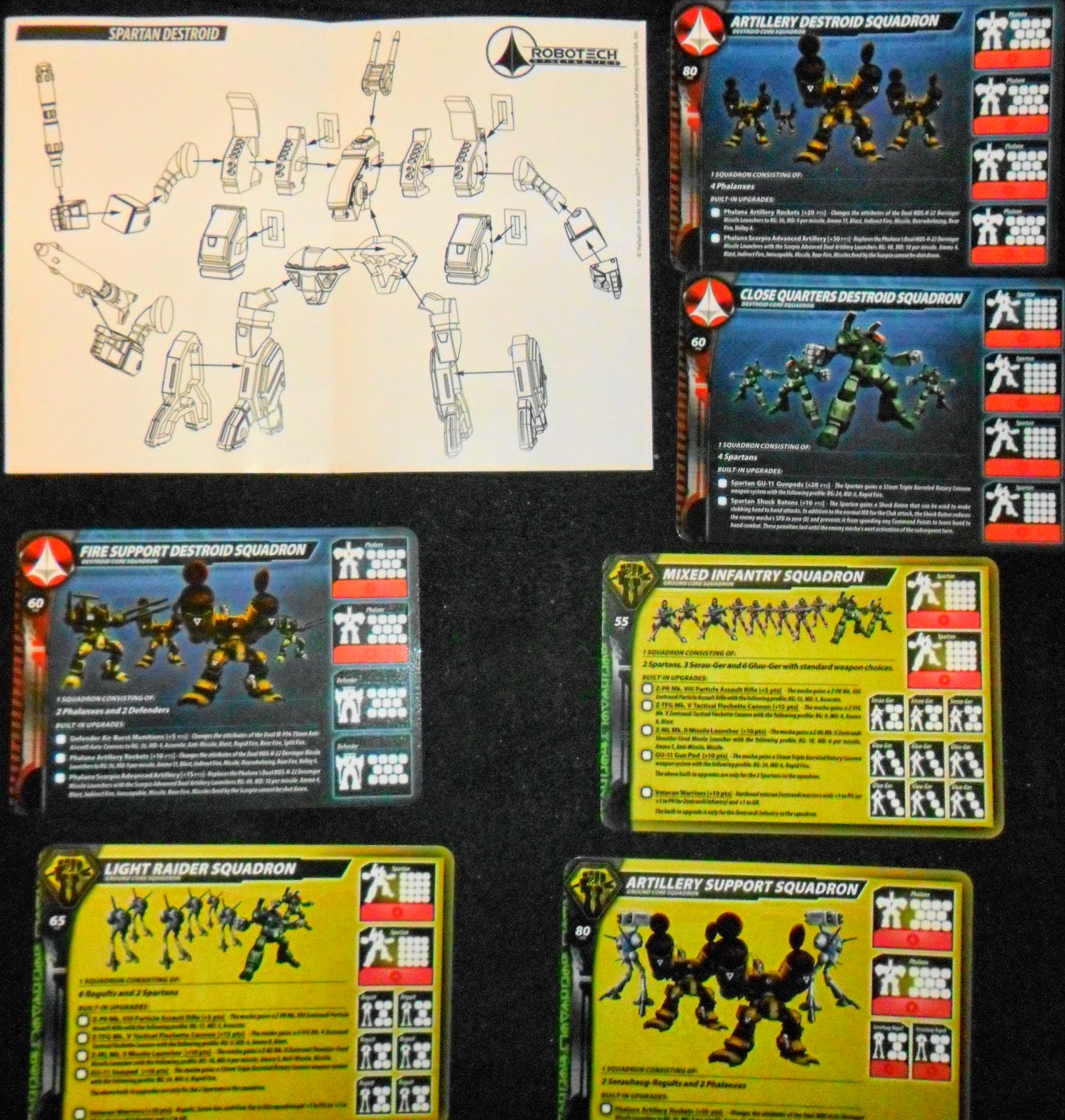 The other mech is on the back, and there are squadron cards for larger units, including some that require other boxes.  But it seems as if both factions can use the models included, which is very nice. 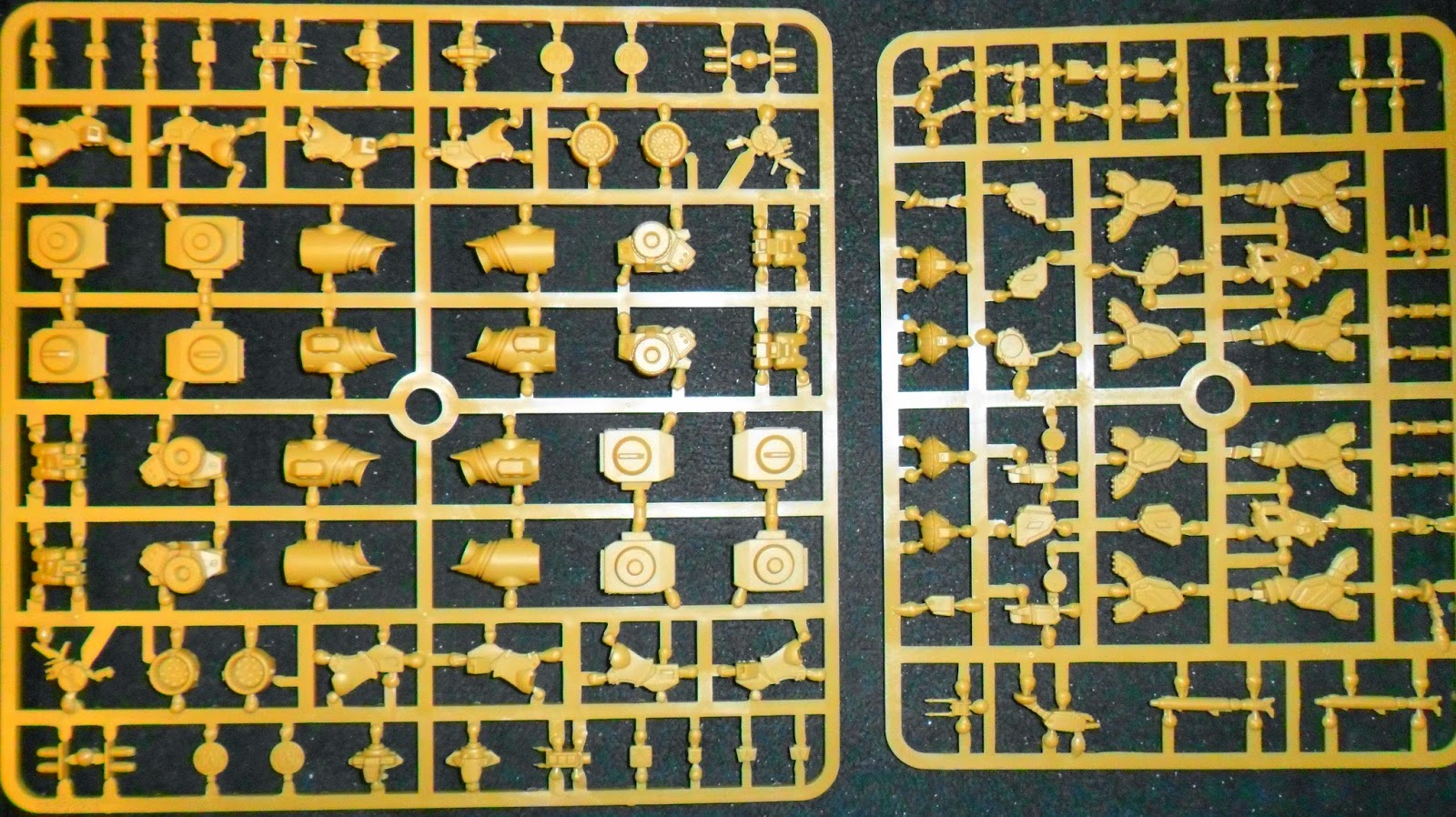 This however is the problem.  A pair of mechs per sprue.  Not really poseable as they have a default pose pretty much.  Except the way they are assembled requires you to build both mechs at once, and many of them have three or more sprue gates.  It does look to be normal plastic you can use model cement on thoughI am not 100% sure of this yet.  The detail looks pretty solid but..

Around 30 pieces per roughly two inch tall mini?  These are supposed to be GAMING MINIATURES.  To put together a decent army is going to take forever just to assemble, much less paint and finish.  This was not very well thought out.  At least a third of these parts shouldn't be there especially with the generally static poses.

Expect a follow up whenever I get around to building the models so I can compare and contrast to their Battletech cousins and similarly sized Macross models.
Posted by Captain Rufus at Tuesday, December 16, 2014 No comments: