I'm sorry.  I have to show off the awesome:
(Click for bigger.) 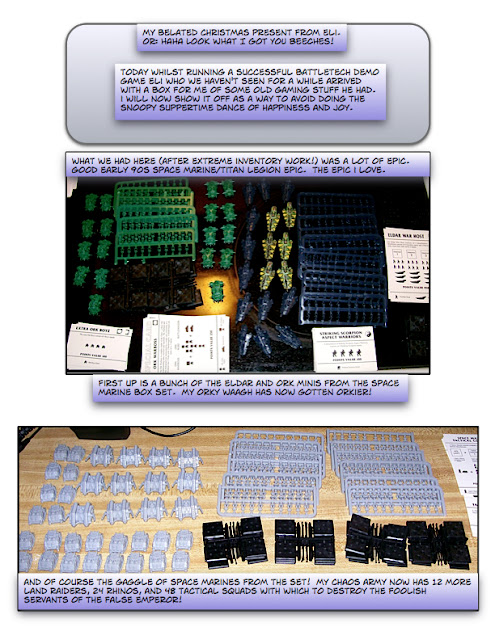 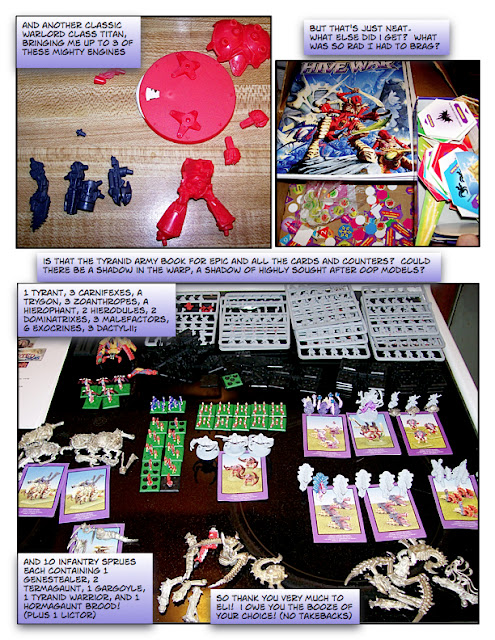 I have so much awesome now to assemble and organize better!  Now if we can just get Eli to sit down and bring out the gift I got him (A decent amount of Arcane Legions Romans.) and get a game on.  I've had my force ready to go head to head since December!
Hive Fleet Mustafar has now gone into Epic scale so I can now run 3 player mega games of Epic that will take all day long.
ROOOOOOOOCK!!!
Edit:  If my quick perusal of the Epic Tyranid force org charts are correct:
I can run everything but the 20 stands of termagaunts.  Or 300 points in Epic.  Another Tyrant opens up that for 150.[But what I have now would let me do: 2900 for the big swarm, and 2600 for the smaller swarm.[ Or a 4500 point army containing  75 bases/models to move.So one more Tyrant would do me a 4950, or close enough to a 5K army for government work.
See, if my understanding is right, the Tyranids use these hex tile force cards.  Each card has an arrow on it.  You can attach an arrow to an arrow only.  For the Nids, only the Warriors, 2 Dominatrixes, and the Hive Tyrant fit this role.  The 10 stands of Warriors equal 2 tiles.  (My Brood mention in the comic is just the actual number of bases.  5 stands make up a unit card in most cases.)  Each Tyrant or Warrior allows 3 units to be attached to them, and the Doms allow for 6 as they are the true force commanders.
Thus each Dominatrix can have at least 6 units attached to it, or if you somehow have a LOT of Warriors and Hive Tyrants, it can blossom into a ridiculously large force.  (I am sure there are command radii and things in the Nids and core Space Marine/Titan Legions rules that would make it foolish to be too big however.)
But this means if I can get one single Hive Tyrant, I can use EVERY SINGLE model Eli gave me, with just shy of 100 pieces on the board.  See in Epic individual troops are nonexistent.  Each base contains 1-5 infantrymen depending on their size.  As mentioned, a unit will be multiple stands of these 5 man bases.  So that 150 point Termagaunt (or Termagant by the naming conventions of the Epic edition in question) unit is a "squad" of 10 stands in this case, intending to be 50 Termagaunts which would be their own seperate model in normal 28mm Warhammer 40,000. 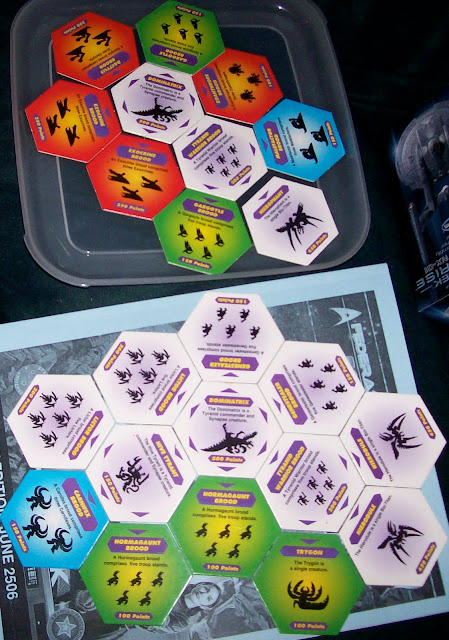 My 2 unit examples are above.  (A bit blurry as the light is a bit bad in here at night.  Camera isn't a fan of low light.)  See the top hex group?  I could pull out one of the red tiles, pop in a Hive Tyrant (see the bottom group tile on the 7-8 O Clock position from the center Dominatrix!) there, and put the 2 Termagaunt broods and the red tile back as the Hive Tyrant has 3 attachment points.
Its a little confusing at first, but I actually like the fiddly bits in Classic Epic for whatever reason.  Its one of the reasons the GOD AWFUL Epic 40,000 came out like it did.  They were going the opposite direction of the previous, somewhat popular Epic.  See Classic Epic has a nice short rulesbook, especially if the absurdly large Imperator Titan and Ork Mega Gargants are not used.  However the special rules and exceptions all the units have is quite intensive.  Epic 40K made the core rules more complicated, but ultra simplified the units themselves.   Apparently the Epic Armageddon ruleset is someplace in between the two.
I could also buy the indie wargame "Future War Commander" which is a generic sci fi multi scale minis game I could use all these minis for as well, giving me Tyranids vs Chaos vs Space Ork vs Ogre/GEV forces vs Battletech vs ect.
But its a 50 dollar rulesbook for a niche market though its spoken of quite highly.  Perhaps if I knew people using the ruleset I would try it.  However I don't, so its classic Epic for me.
Now to reread the rules and try to rope some people in.  And assemble a TON of adorably wee Tyranids.
Posted by Captain Rufus at Wednesday, April 28, 2010 No comments:

For Radioactive Press' Toy Battle System Games (Mega Bots and Giant Monster Rampage : http://radioactive-press.weebly.com/ ) I am gonna do a full review but thanks to MagicDrew wanting to get some demos of the stuff we play going at a local comic shop to possibly recruit more folks, so here is the exciting introduction to the scenario!

(As always click on the images for larger and clearer ones.) 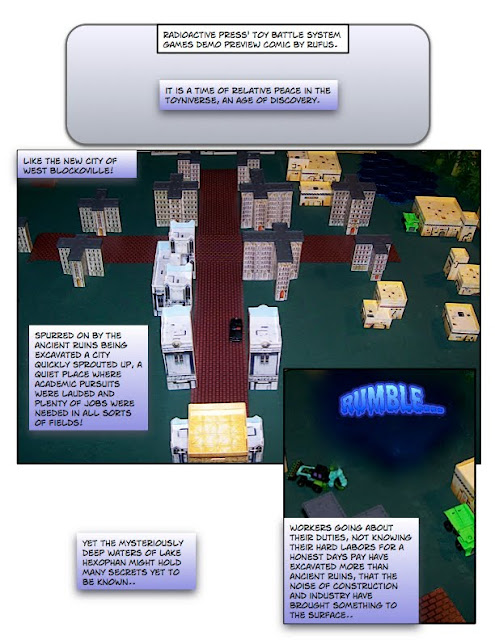 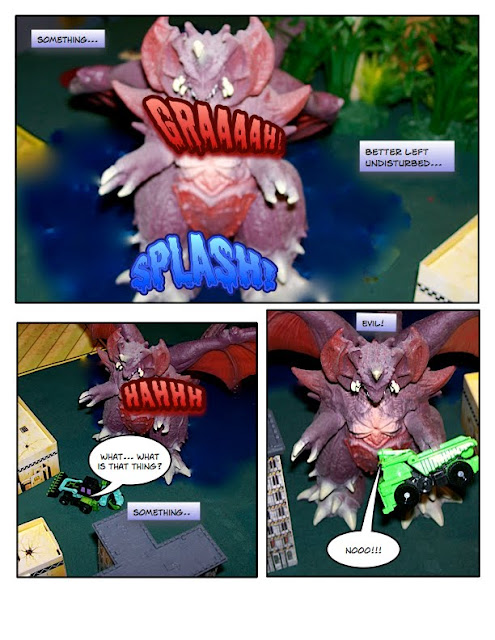 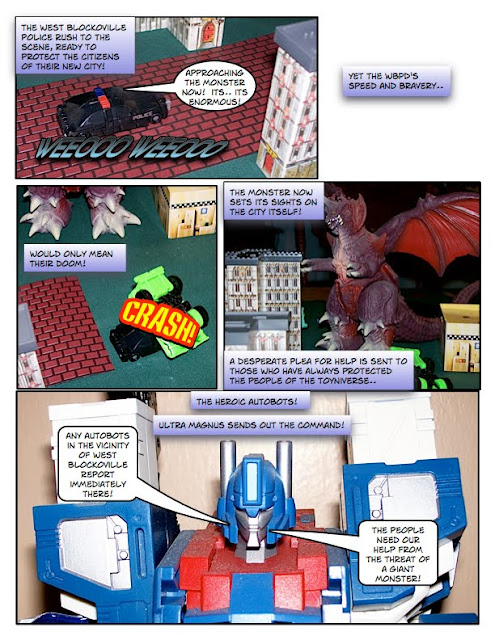 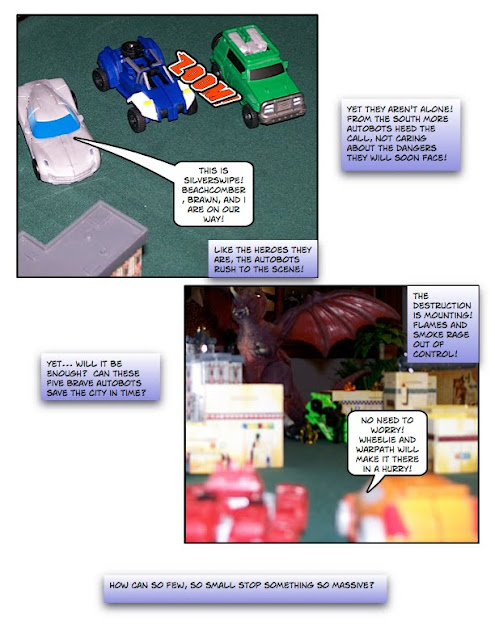 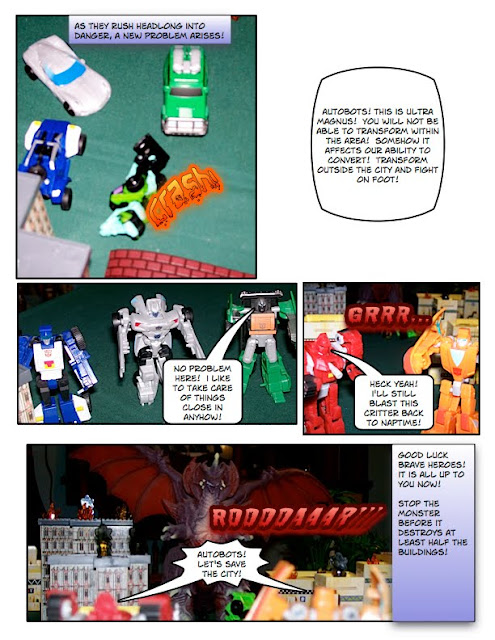 Will the Autobots save the city?  Will anyone actually want to try the game with MagicDrew and I?
We will find out Tuesday at Arkham Asylum in Norwich CT!
Posted by Captain Rufus at Friday, April 16, 2010 2 comments:

Operation Don't Buy So Much Dammit Part 3: The Update

What have I bought since the last time?

Codex Blood Angels: 25.  My Pre Heresy World Eaters' army book.  I originally used the free PDF codex since it was cheap and Death Company pretty much are WEater Berserkers anyhow.  I will probably do a full review of this one sometime soon.  Same with the Drop Pod, though I need 2 of those for my list.

Radioactive Press' Toy Battle System Rulesbooks: Giant Monster Rampage & Mega Bots.  27 for both.  Wanted both of them as I like the idea of using my toy collection as something other than a subtle blend of dust collector and birth control device.  And I like Giant Robots and Giant Monsters.  Lulu.com had a 10% off sale so huzzah.

2 Sets of Tower Blocks:  5 each.  Knockoff generic Jenga blocks.  I needed blocks to make towers for the Toy Battle games anyhow, and these were the best cheap choice.  48 basic wood, and 48 painted ones with a color die so you are forced to pick a certain block in your default play.  Wal Mart didn't have any more unpainted wood sets.  I may buy the last colored tin they have this week which should be plenty of destroyable buildings.  I could have gotten the 56 block official Jenga set, but its 10 bucks.  And the only legit Jenga I want is the Donkey Kong Jenga set.  I have seen pictures.  IT IS GLORIOUS.

What does the big board say now?  216 bucks spent as of mid April.  Im 34 dollars shy of  not getting the Platinum medal for yearly game expenditures.  Going by current spending values I will only get the Bronze.  As I will at least be buying 1 more Drop Pod for 30 that's gonna put me dangerously close to 250 right there.

Can I hold off buying more stuff?  Can I sell off some junk as to be able to buy more junk and not get it counted?  Can I hold off till Connecticon which won't count since its my vacation and thus I will be allowed to spend 150 or so on goodies?  (Normal people buy tee shirts and knick nacks on their vacations. I buy toy robots and hobby games stuff.)

Still, I am doing pretty well all things considered.  I have passed up more stuff as we go.  And luckily crossposting my review of "All Things Zombie!" to Boardgamegeek got such a wonderful response from one of the developers I now want nothing from the company whatsoever to the point I am selling their games on ebay that I own.
Posted by Captain Rufus at Monday, April 12, 2010 No comments:

Zombie Month: A Blast From the Past: A 2003 Campaign Document!

Back in that timeframe I was prepping to run All Flesh Must Be Eaten, the Zombie Survival Horror RPG.

It just so happens I still have the 2 page basic synopsis and thoughts I had for a rough campaign outline.  Sadly, the game didn't go very far and the 2 PCs were entirely too powerful, and trying to run a game at 9am on a weekday when I was maybe getting 2-3 hours of sleep beforehand just wasn't happening.

So here is some scans of the document.  For fun, or perhaps to inspire some cool zombie campaign ideas for yourself: 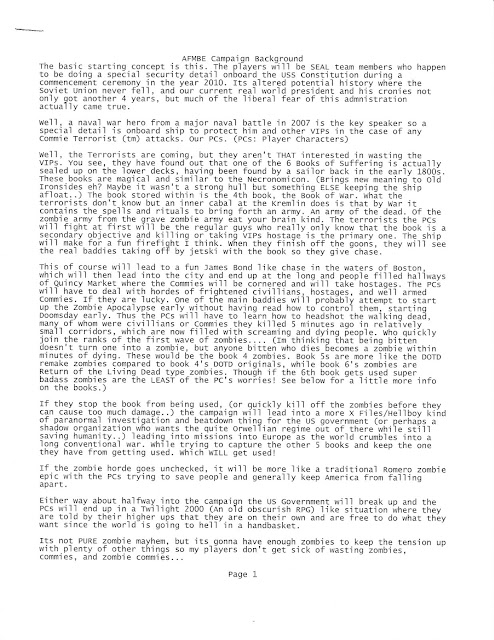 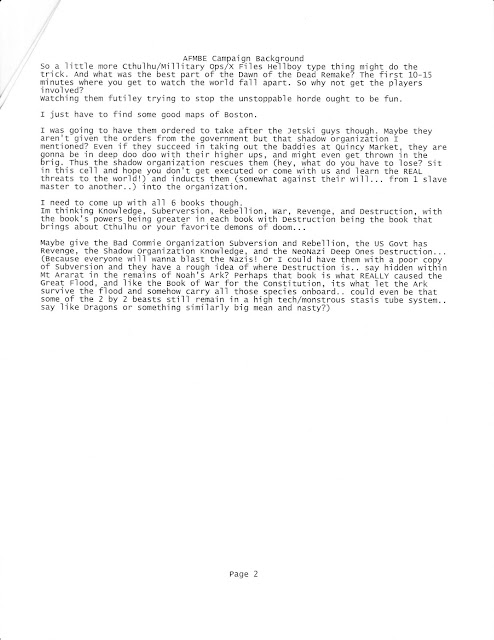 I would probably do things a lot different these days, and would probably have corporate oppression rather than governmental.  (Mainly since I don't listen to right or left wing crazies and pay attention to the real world as best I can.  Which might explain why I am on antidepressants these days, but anyhow.)
It surprised me that I had a jetski scenario in mind for a zombie game when a rather popular horror zombie game used such a scene (but in a totally different part of their story) a couple years later.
Enjoy!
Posted by Captain Rufus at Thursday, April 08, 2010 No comments:

Email ThisBlogThis!Share to TwitterShare to FacebookShare to Pinterest
Labels: All Flesh Must Be Eaten, RPG, Zombies

My Basic D&D Character. Let Me Show You Him.

I present: GROZZO OF THE NORTHLANDS 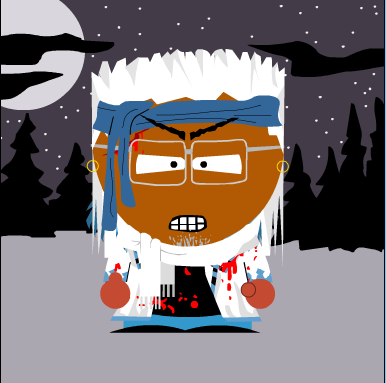