Ahh yes.  The Solo Module or Game Book.  Take Choose Your Own Adventure and add in RPG rules to presumably make it the 80s version of a JRPG as opposed to the CYOA's Adventure Game.

I have a handful of them so let's see what we have eh?  Lots of these products will show up in or have already done so in other Operation Game Collection posts but for completeness' sake they all get shown here.

(Well all that I know that I have.  When actually looking for something else I discovered game supplements I never knew I even OWNED.  That is when it is time to seriously cut the hell down on buying this nonsense!) 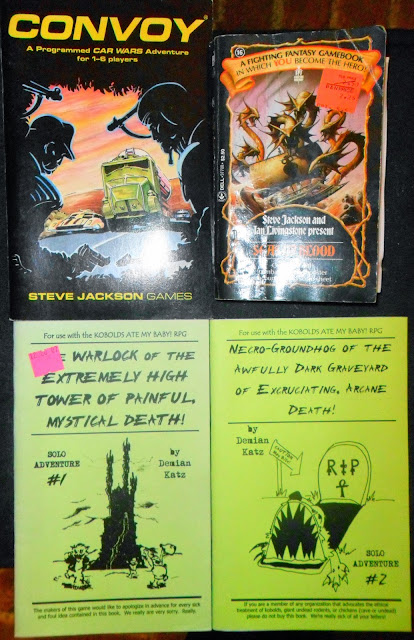 Here we see one of my Car Wars solos, a Fighting Fantasy game book from an entirely different Steve Jackson I got for like two dollars but havent played yet, and two solos from the indie joke RPG Kobolds Ate My Baby! 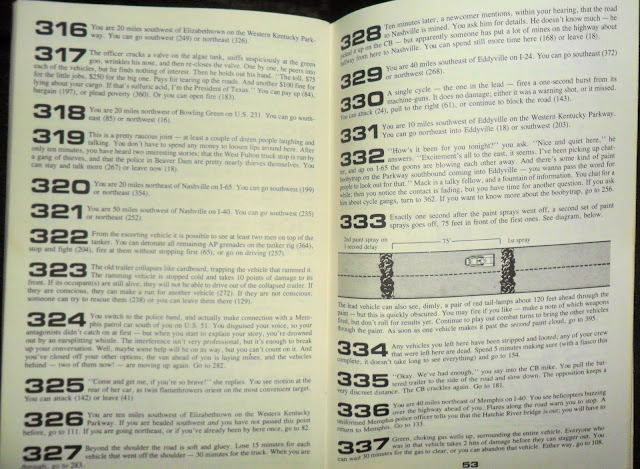 The Car wars one looks pretty good and fun. 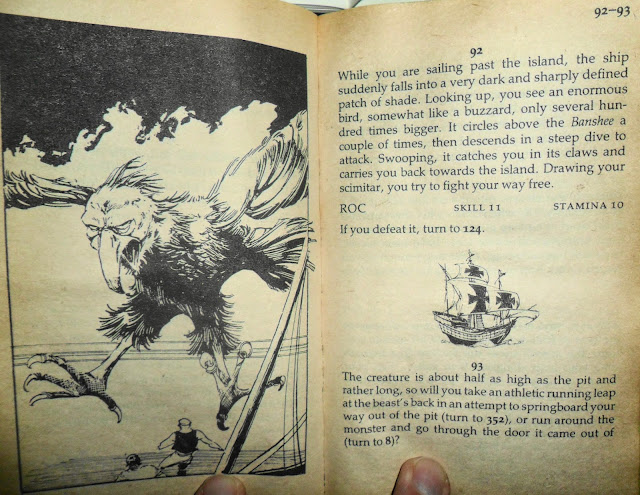 Fighting Fantasy gamebooks are rules integrated CYOAs with simple RPG rulesets.  This one is about being a pirate captain.  I want more of these books which were a lot more popular in the UK than in the US.  Nowadays it is almost easier to just buy the iOS versions of some of these books which add in redone color art, digital dice, and all sorts of neat quality of life bits. 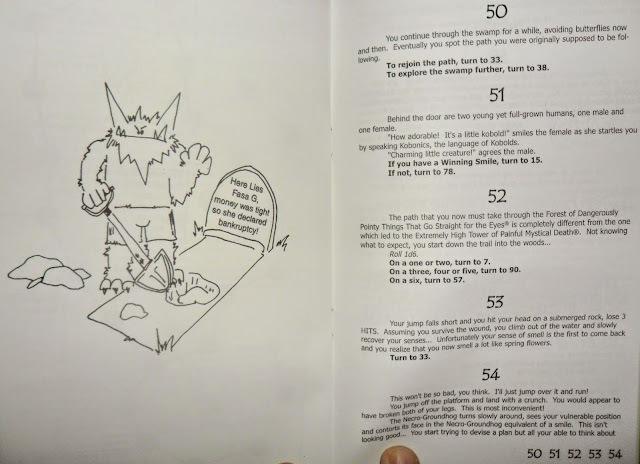 The Kobolds solos are obviously micro niche indie press ones before the modern internet publishing revolution happened.  Gotta love the dig at FASA. 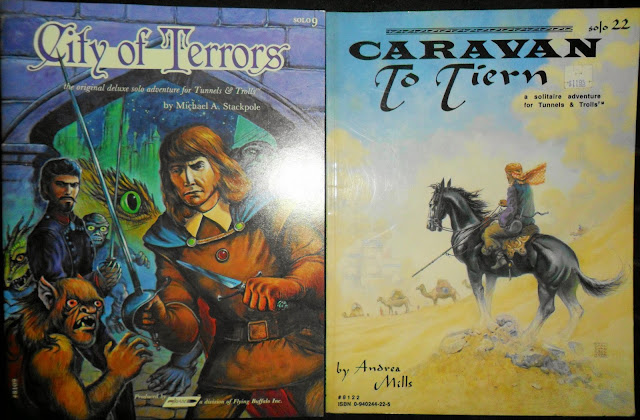 Now Tunnels & Trolls is rather famous for having tons of solo adventures.  It being a simpler RPG made it a lot easier system for this.  (And TnT being far less popular than D&D means you were probably more likely to play through solos than get a group of people willing to play something other than WHAT GARY WROTE FAAAART.) 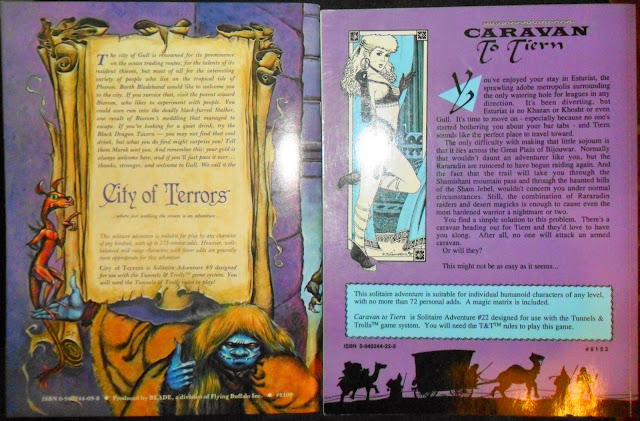 Yes City of Terrors is by THAT writey man Mike Stackpole in his pre Star Wars novel days.  There has been a PDF reward of that book for the current TnT kickstarter that thankfully modifies some of the artwork which in this book has.. issues. 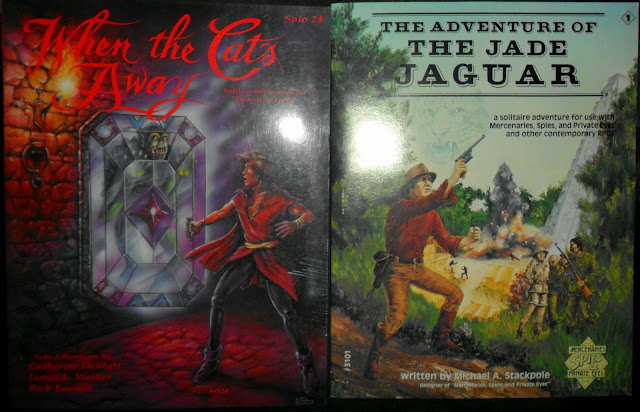 Another TnT solo and a solo for the Pulp Adventure Novel RPG using the same basic ruleset as TnT known as Mercenaries, Spies, & Private Eyes that has the best game cover EVER.  But whenever I properly cover TnT stuff we will see it.  (Also KAMB! will get it's own day in the sun.) 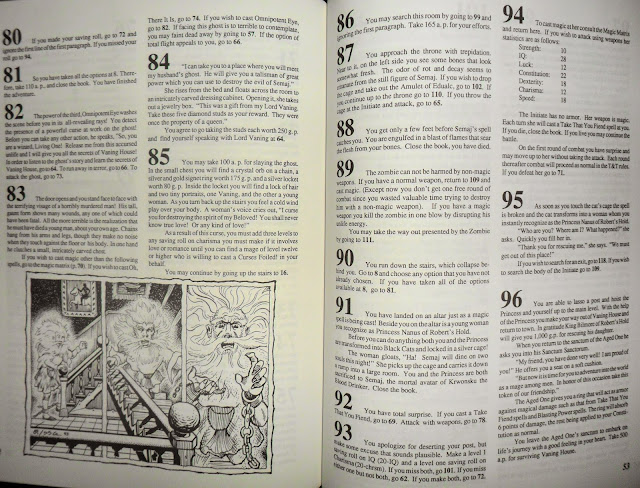 TnT solos are big and meaty. 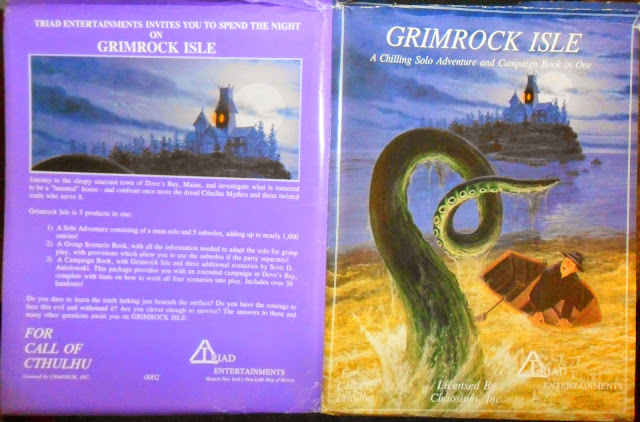 Grimrock Isle is an absolutely MASSIVE solo adventure and RPG campaign for Call of Cthulhu.  Insanely so. 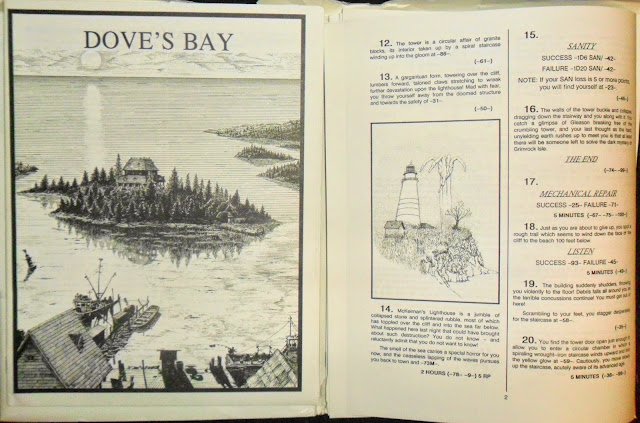 It is by a smaller company so it has a bit lower production values than a larger publisher would but they do a solid job. 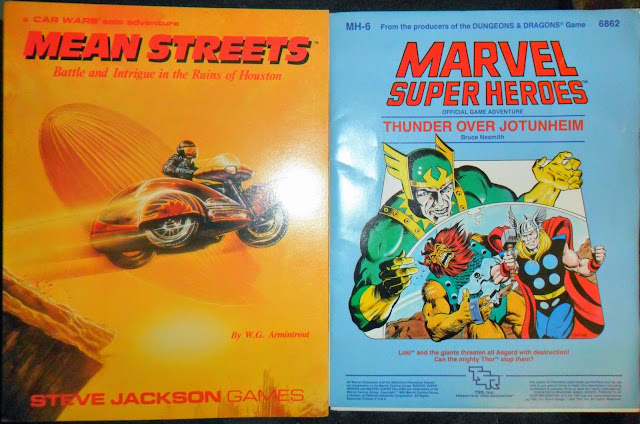 Yet another Car Wars solo, and a FASERIP system Marvel Superheroes solo, the latter of which kind of inspired this post.  I got it a few weeks ago for 7 dollars still sealed!  I didn't even know MSH had solo modules! 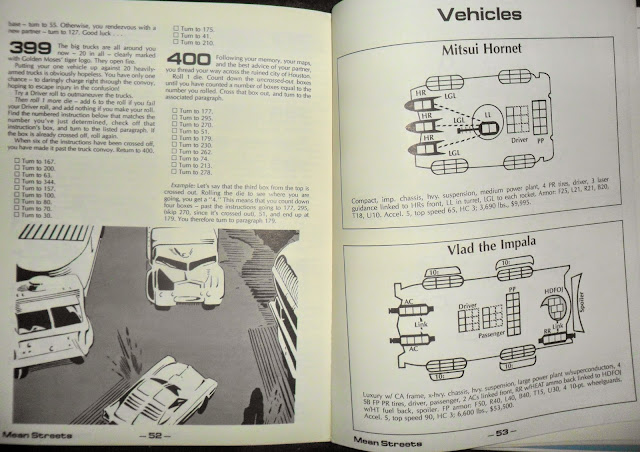 This Car Wars solo is like the last one only in a bigger book format and thus roomier! 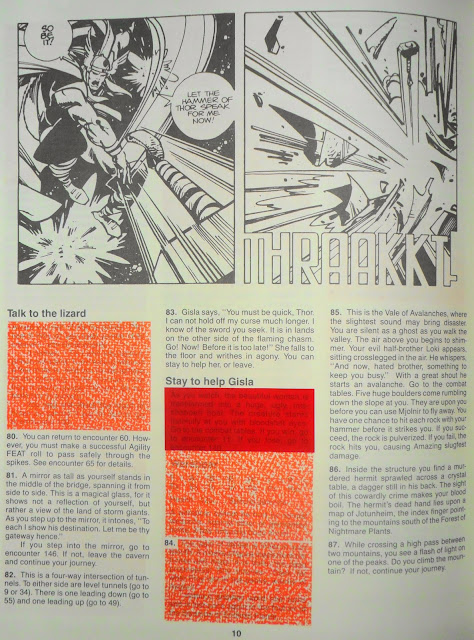 About half the TSR made solo modules for their game lines used a piece of red cellophane to reveal otherwise mostly hidden parts that were printed in a way the red would obscure the text.  Kind of like the old Tech Spec Reader thing 80s Transformers toys had. 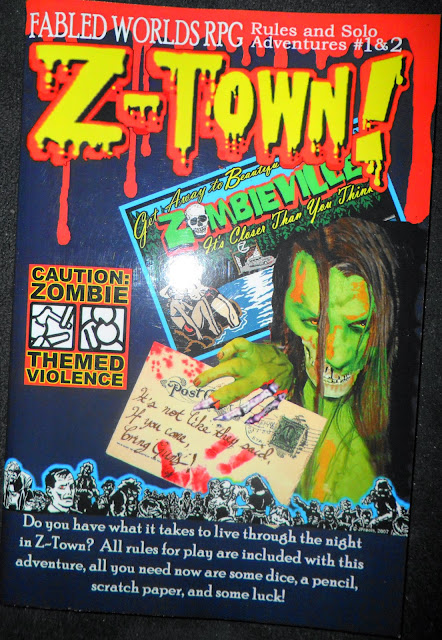 This is actually one of two solos here I have actually gotten around to playing.  Well, at least the first scenario. 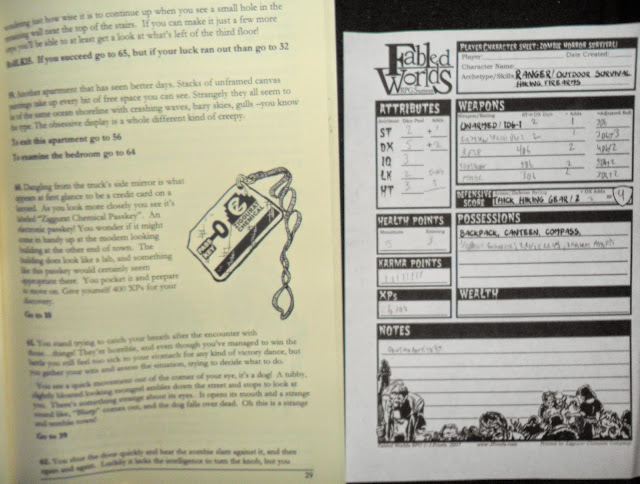 Something look familliar?  GURPS/Fantasy Trip anyone? 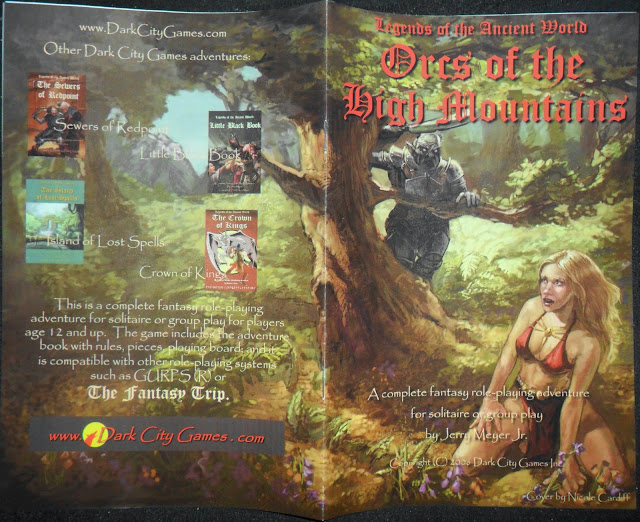 Given that this company also does solos using proto GURPS rules it makes me wonder the legalities and IP rights of Mr. Jackson's original RPG wargame thingie... 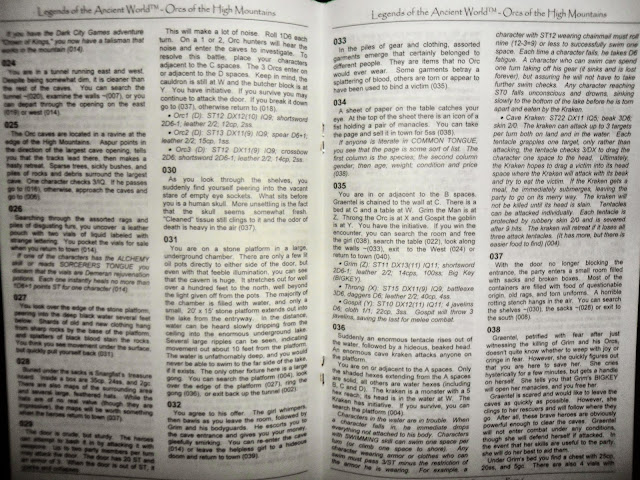 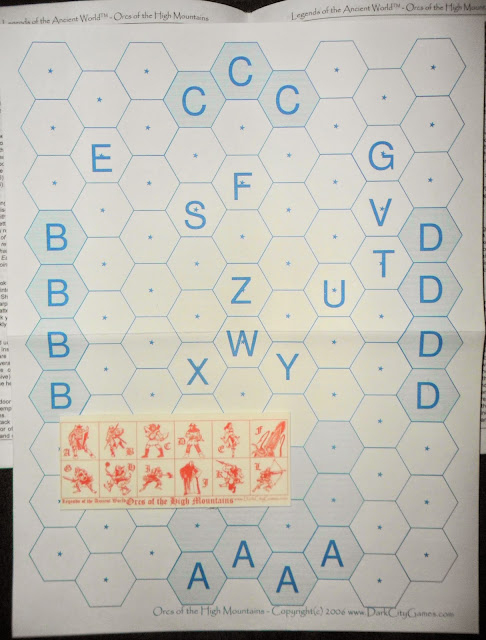 It even comes with counters and a generic but modded battle map for fighting battles on. 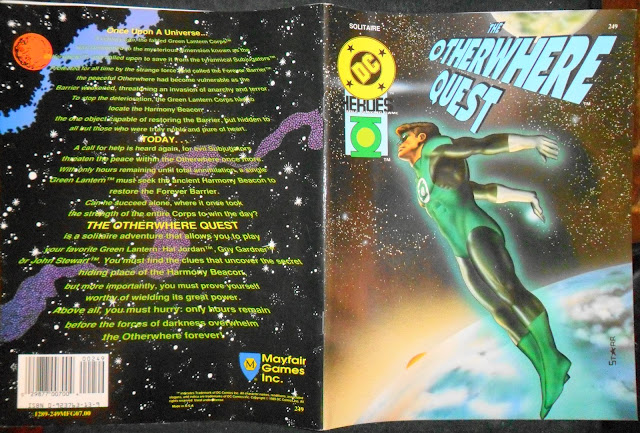 Even the Mayfair Games DC Heroes Exponential Game System I will talk about more whenever I cover my Supers RPGs had at least one full solo! 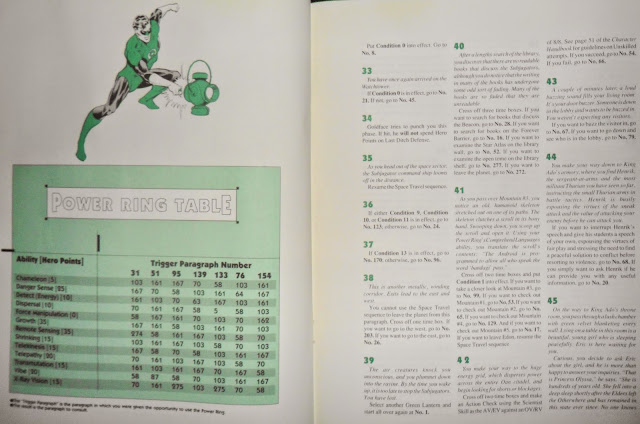 Sadly its for HIS HOLY LAMEASS WORST GREEN LANTERNNESS himself, Hal Jordan.  Hal Jordan sucks y'all.  Can I play it and pretend to be John Stewart or Kyle Rayner or maybe that New 52 Lantern who is Muslim?  (Probably wouldnt logically fit to be original 30s Green Lantern, alien Lanterns, Jade, or Guy Gardner.  Even if a Guy Gardner solo would be FUN. AS. HELL.) 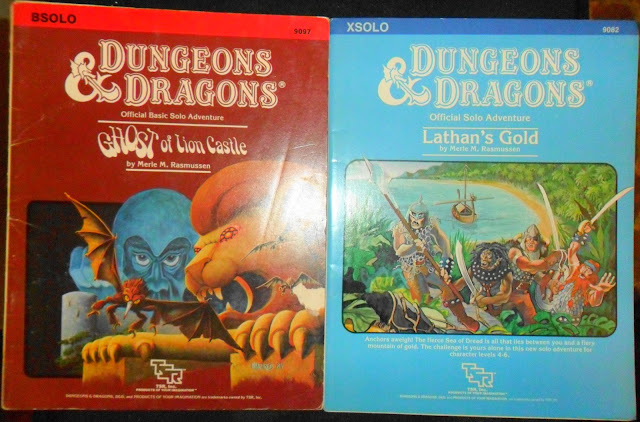 And the other solo I have played through, Ghost of Lion Castle!  I played this one sometimes onboard ship in the Navy on a watch post that was basically sitting in an aft steering compartment that was closed off, noisy as hell, and effectively DOING NOTHING FOR 4 HOURS.  Because unless something went wrong you weren't doing anything at all!  Just sitting there staring at walls and looking at backup ship controls.  Well this is what I did when one of the engineering department people also on watch for mechanical reasons weren't being a wanker.  They weren't doing anything EITHER really. 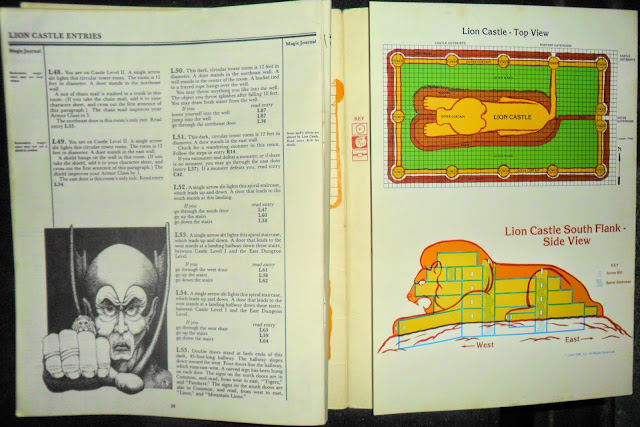 The DnD ones look nice as was the wont of TSR. 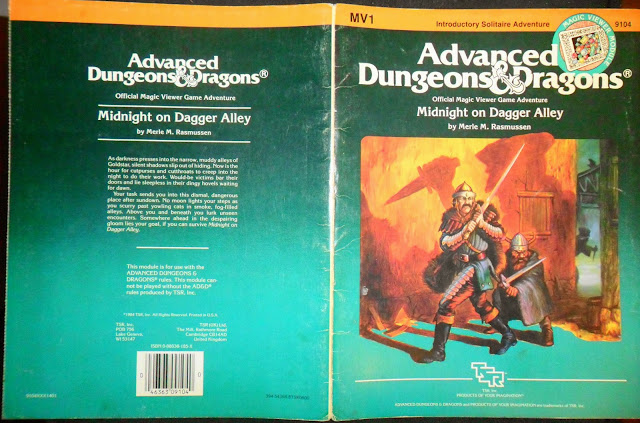 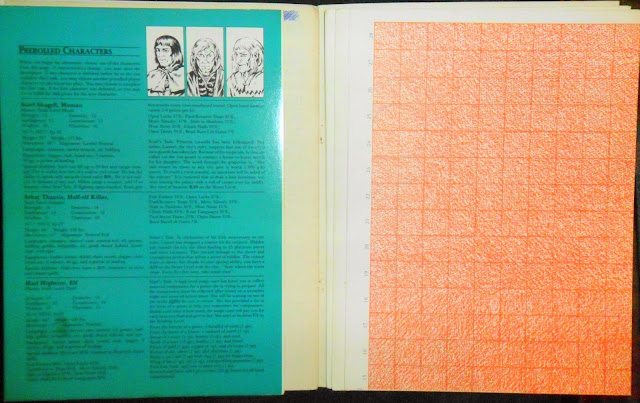 It seems a lot less like a CYOA styled solo however.  I haven't had time to read through it properly but it has a bunch of odd special rules and stuff plus some massive poster maps.

There are a few other TSR solos but most of them used this odd ass Invisible Ink system which basically made these solos a single use deal.  And you know, even if not the pens are long since dried out and unusable.  If I run into them cheaply I might at least see if you can use them with the HONOR SYSTEM like the normal numbered entry solos that most games were.  Luckily losing a tiny slip of red cellophane is easily replaced.  Heck just a set of old blue/red 3d glasses will cover you! 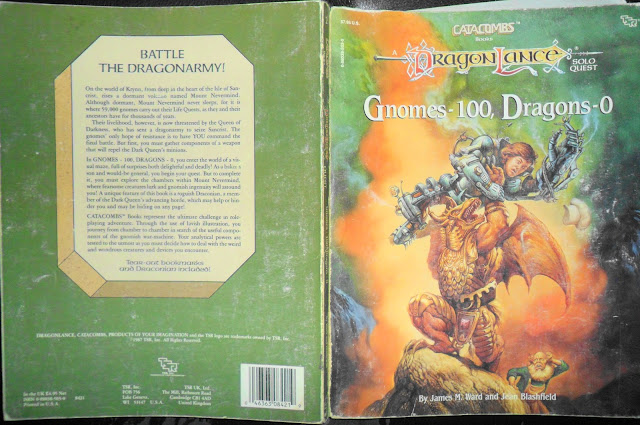 TSR even did a small series of system agnostic solo gamebook RPGs in their Catacombs line.  They were probably trying to appeal to more general book fans and people who like me weren't permitted to play D&D for whatever generally dumb reason our idiot parents had. 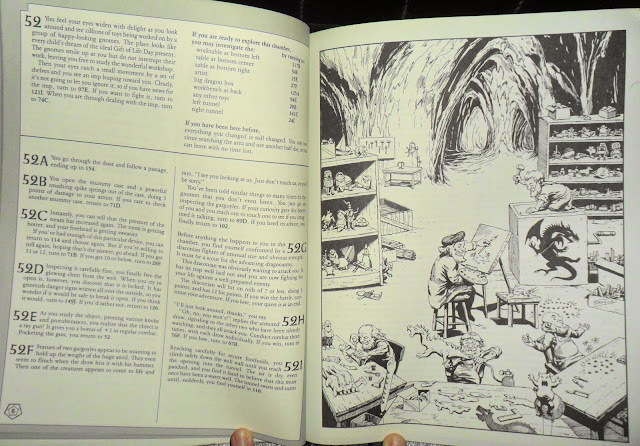 This book is HUGE.  Tons of entries and even virtual dice in the corner!  Though you would still need a pencil... 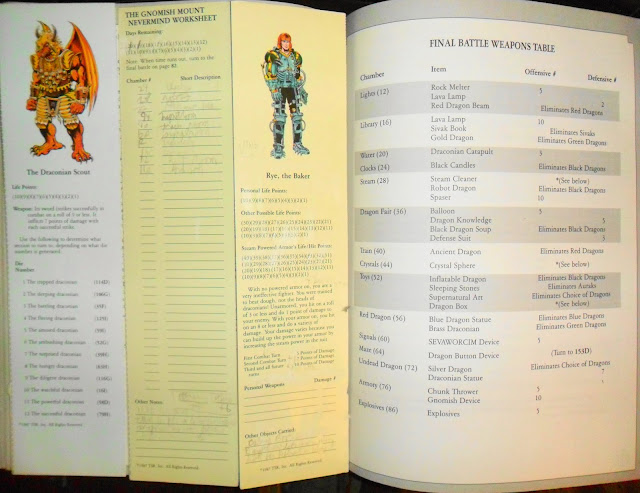 In this one, you are in the Dragonlance setting helping TINKER GNOMES fight off a Draconian army.  As a human baker in a gnomish made steam powered armor.  Your name is.. Rye.  *sigh*  It is a really fun setting and scenario where you go hunting through these crazy gnomes' absolutely bonkers hive city looking for artifacts and working machines that can help fight off the Draconian army.  Nice.

Now you may be wondering WHY you would want these things today?  Well, what if you don't have a game group but want to physically PLAY an RPG and not just have a videogame handle all the mechanics?  Well there you go!  Maybe you like CYOA books but want some RPG mechanics?  What about a way to have some practice in a game system before you try running it for friends?  Hell, maybe even use the solo as the group adventure or as a simpler example of how you do these RPG thingies?  (Though the latter is basically removed as we now have Youtube.)

Heck, some solo RPG game books like Fighting Fantasy and Lone Wolf (I could have sworn I owned the first Lone Wolf book but it seems to have been lost to the Ether.) ended up getting full tabletop RPGs and even electronic ports both then and now.