Yes I have been slow on blog updating.  Well this blog as I have been working on another project as well:  http://masterratings.blogspot.com/

So feel free to go there and read if the Master System is your jam.  Or might be your jam.

(Of course various videogames have been amusing me too.)

But I have been getting the odd bit of retro computing on.

And some Arkanoid with Vaus controller on the NES.  Sadly even with repeated cleaning and even BOILING my cartridge connector it is still not the most reliable of devices.  And my Vaus controller probably needs a little TLC as many old "Paddle" controllers are wont to need.

But let's get on to the proper fun: 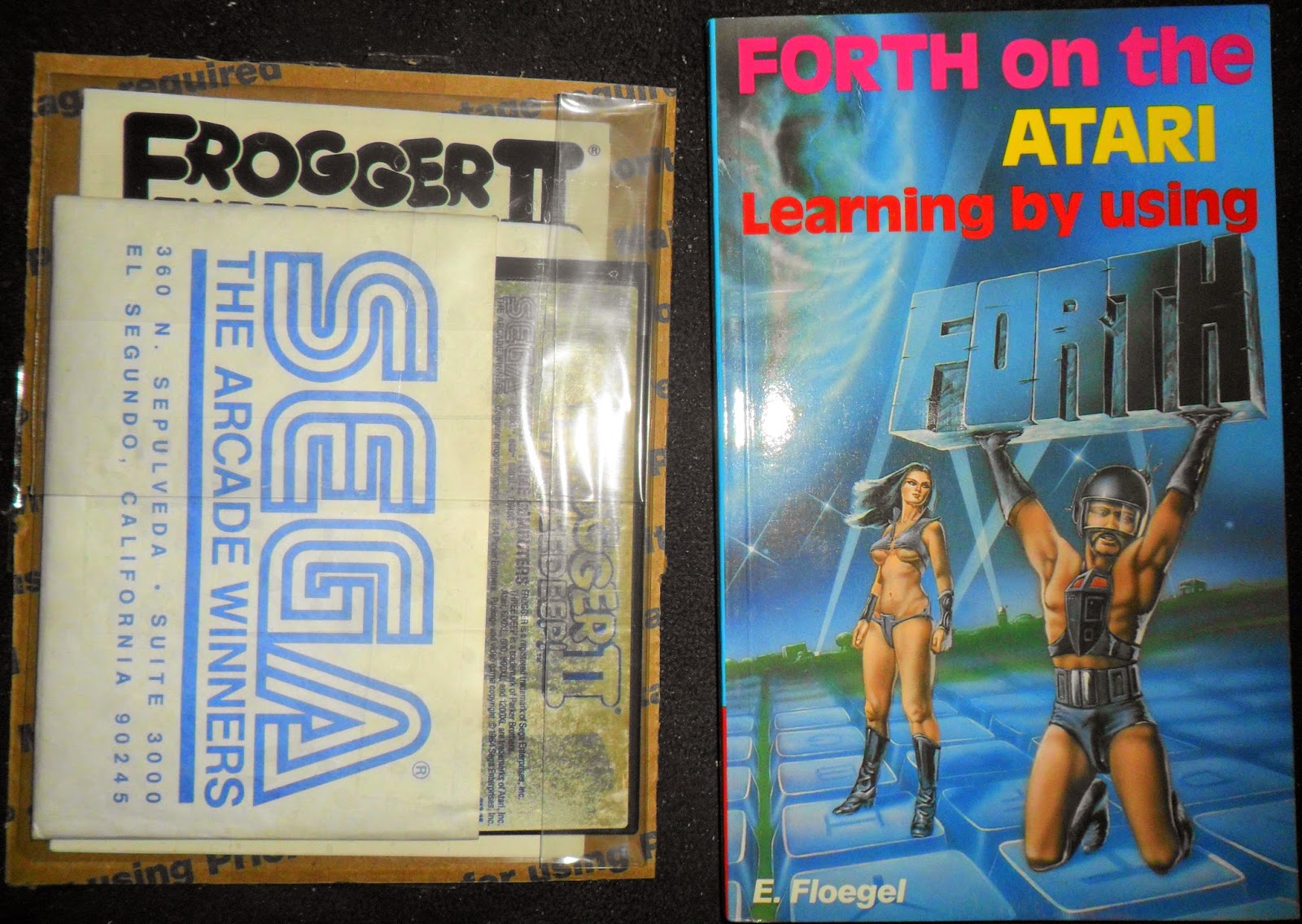 Frogger II!  And the funniest cover to a book ever, Atari computer or not.  Computer or not.  THAT DUDE IS SO DAMNED EXCITED TO BE LEARNING FORTH.  A little too excited methinks.

Of course I STILL need to figure out how to use the RGB DIN connectors with my computers and consoles for maximum quality.  Or if the closed up SCART connection there has the electronics behind it or not. 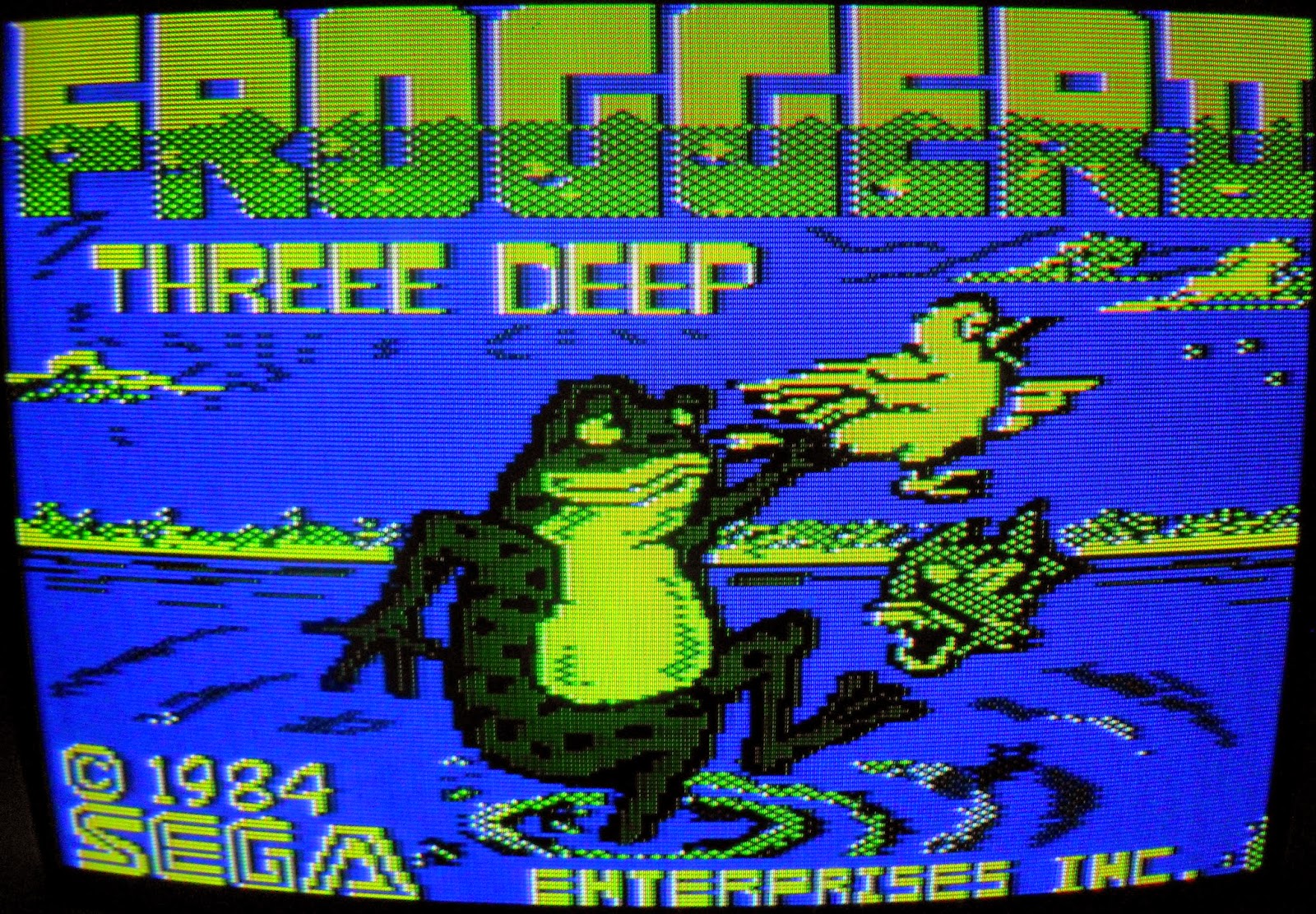 Frogger II is a game I first played in the mid-late 80s on a sort of friend's Coleco Adam computer which is basically a Colecovision only in a computer form.  (That helped kill Coleco.)  I have always wanted to try it again and got a very fair deal. 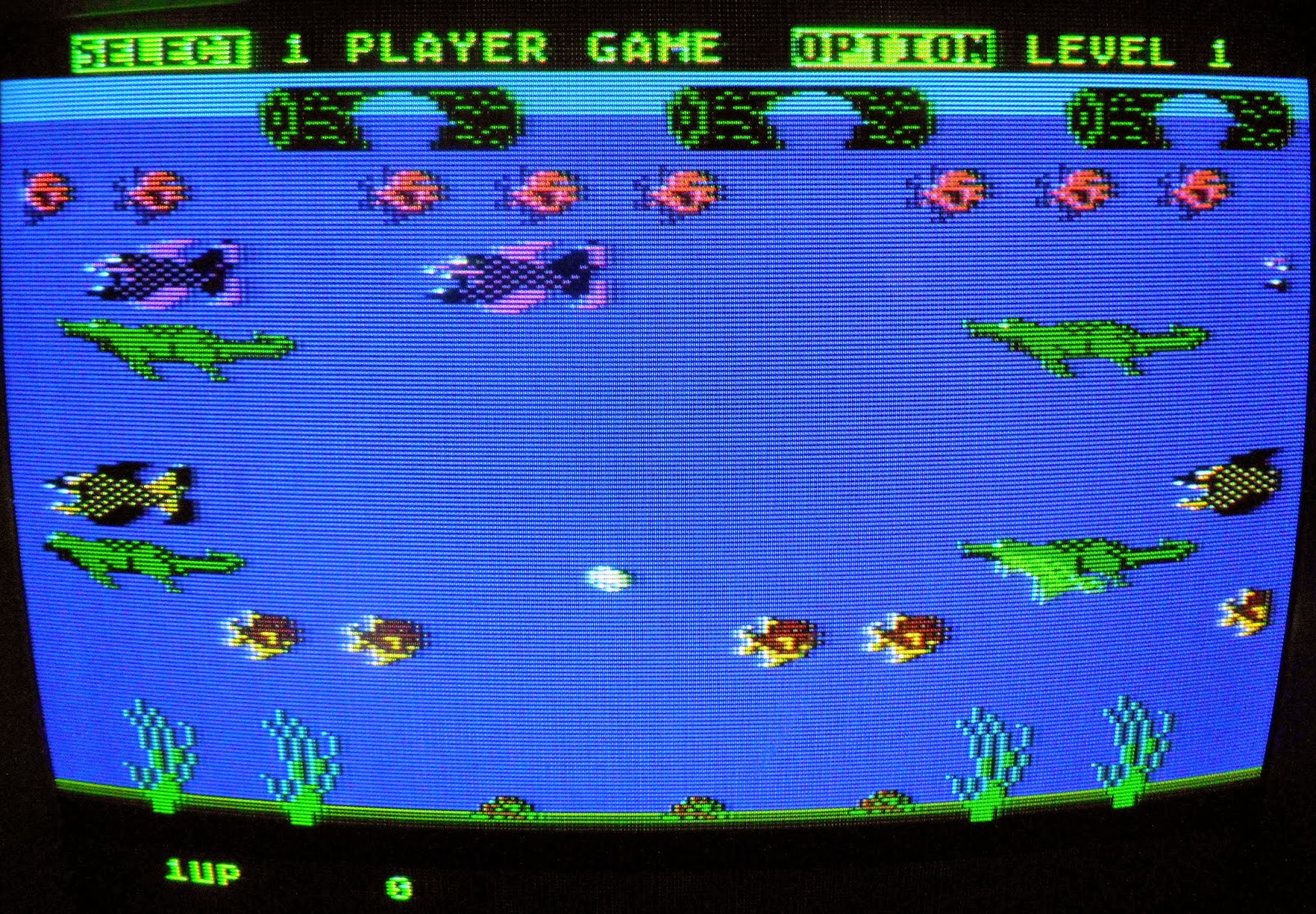 Unlike traditional Frogger, this sequel has three different screens all using the basic Frogger gameplay.  A lake, ocean, and sky level.  Its a bit of good fun.  Does it replace the arcade Frogger 1 on my Xbox 360 with improved graphics modes or the Gameboy Advance port that can do the same?  No, but it is some good Frogger fun so rock on! 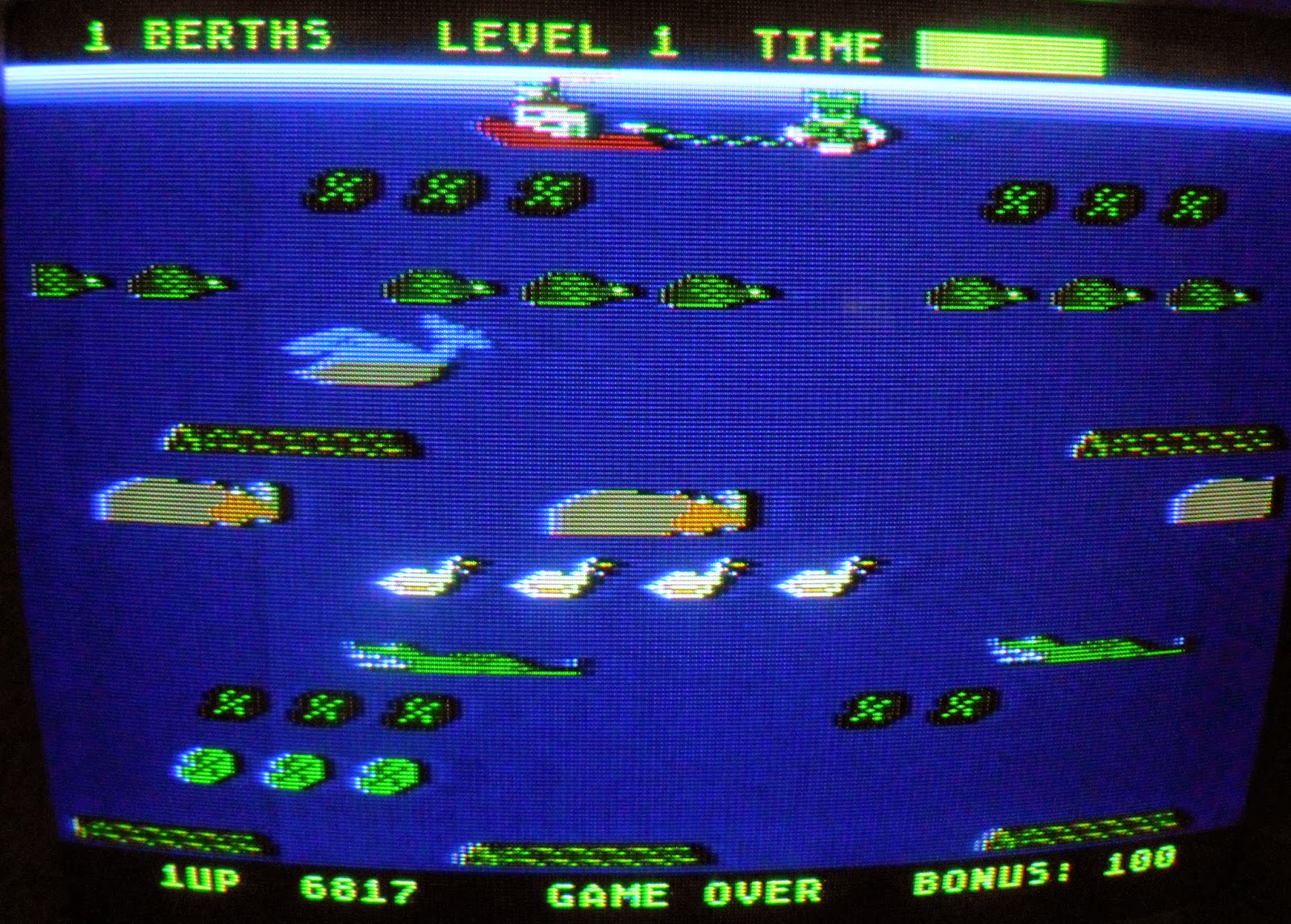 Another of the three levels.  Don't ask me how alligators, hippos, and whales are all in the same place alongside ducks and turtles but.. that's videogames for ya!

And I finally tried out a couple of the legitimate game disks that were part of the big Atari 800 lot I got off Craigslist late Spring. 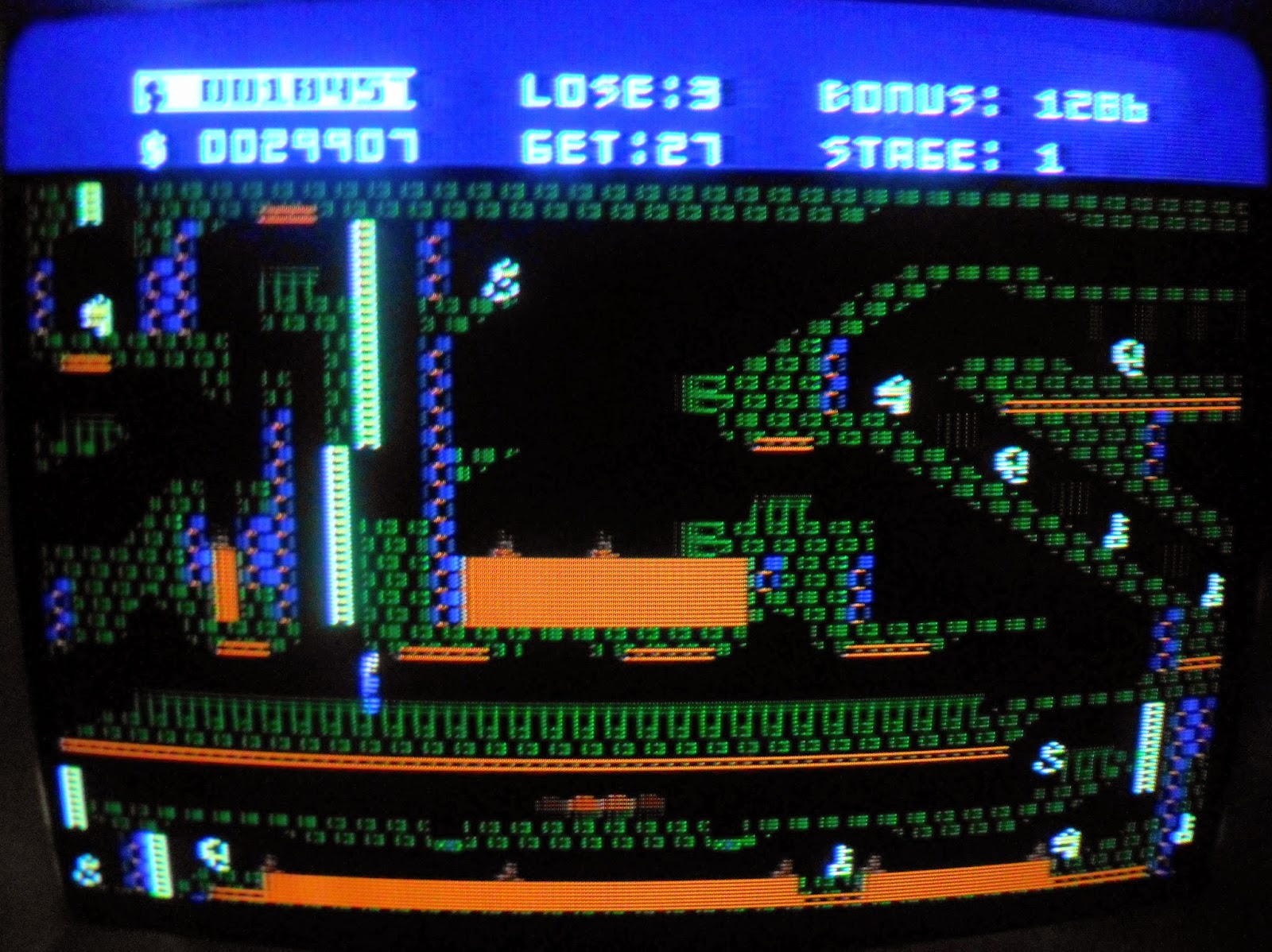 Caverns of Khafka which I never did like on the Commodore 64 but this honestly seems like an entirely different game!  A traditional collection platformer of the era.  Doesn't seem too bad. 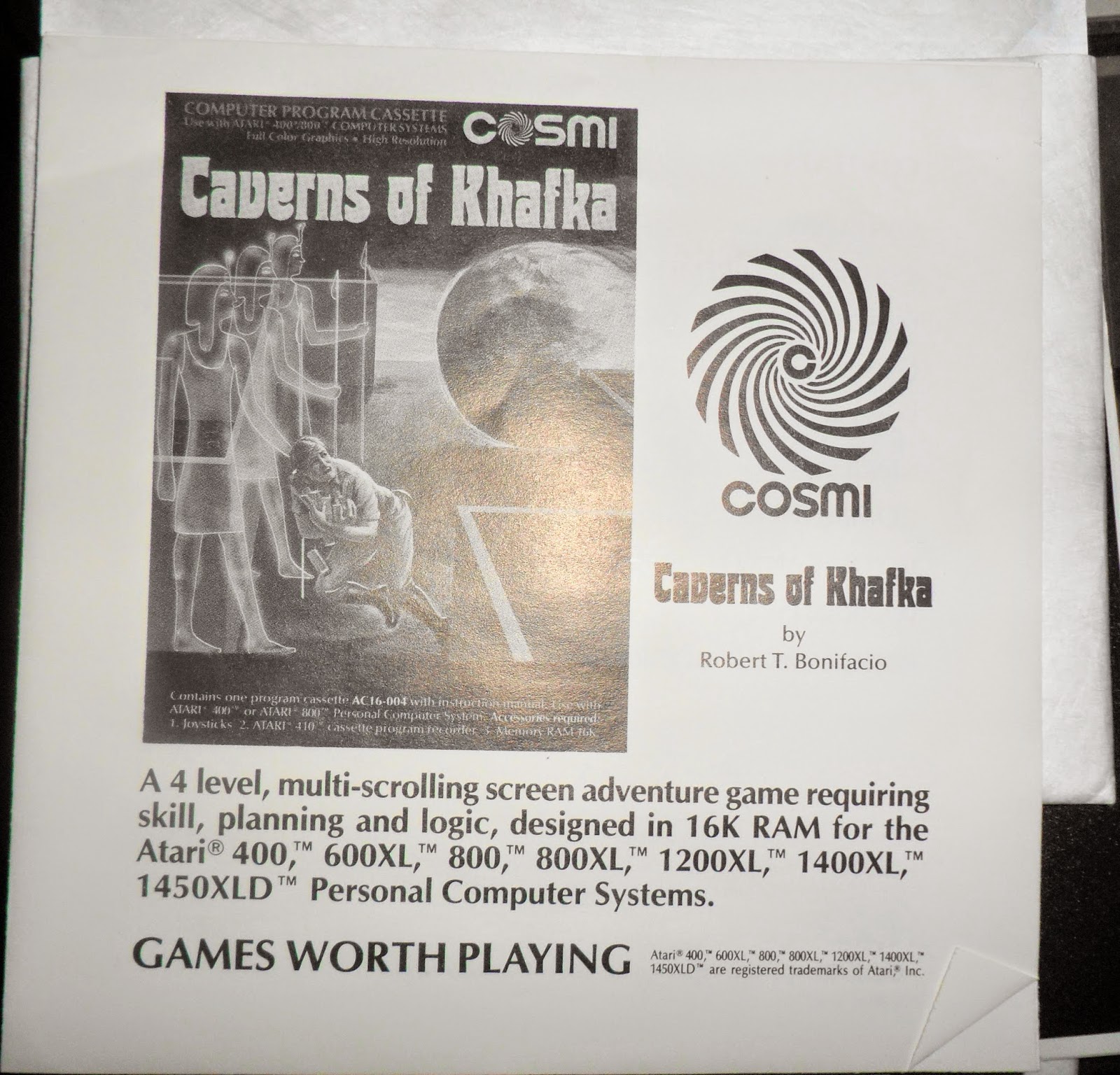 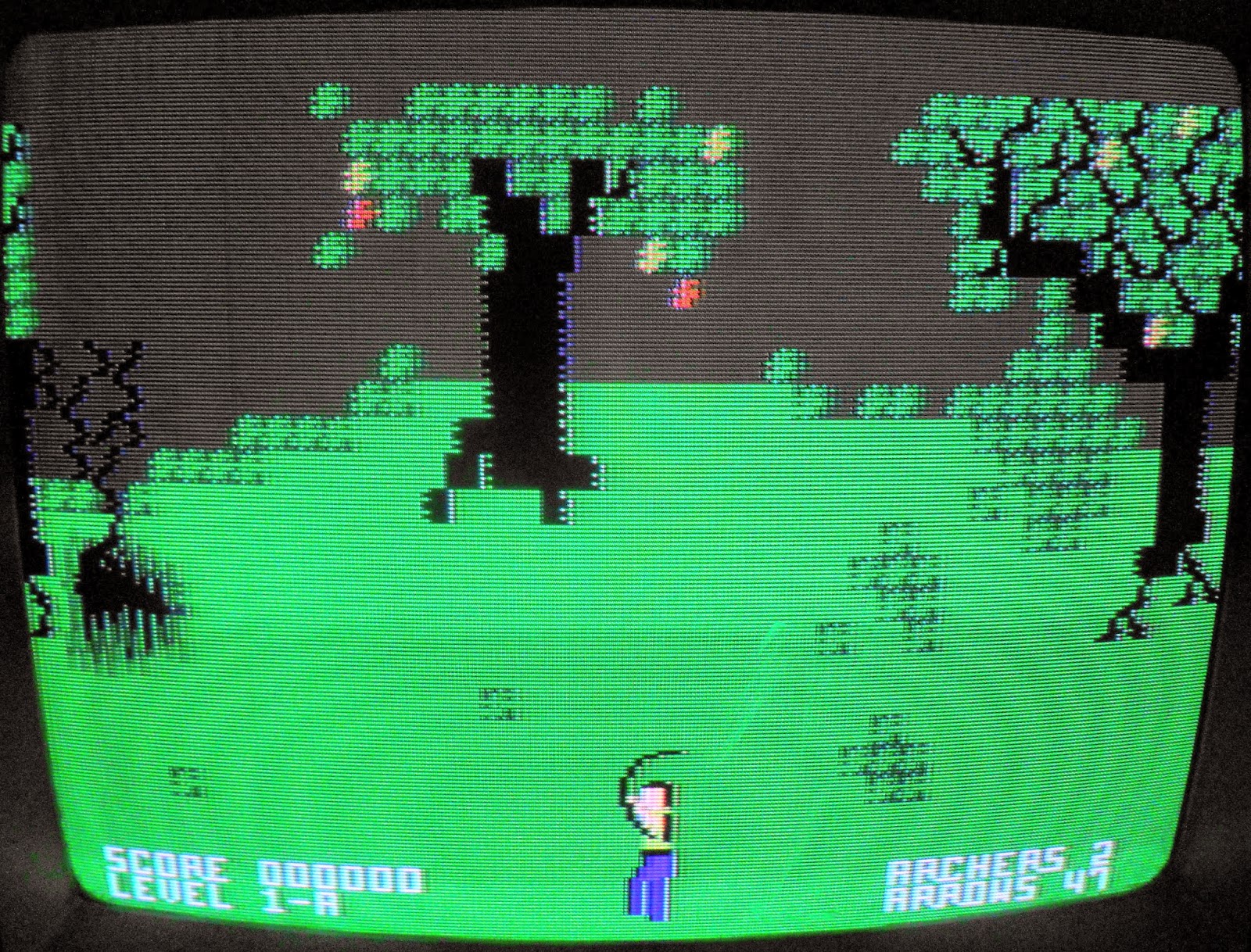 Forbidden Forest which I need to figure out the controls.  I kind of liked the C64 original back in the day but I don't know about this port.  Maybe Demogorgon has too many Hit Dice for the ANTIC chip? 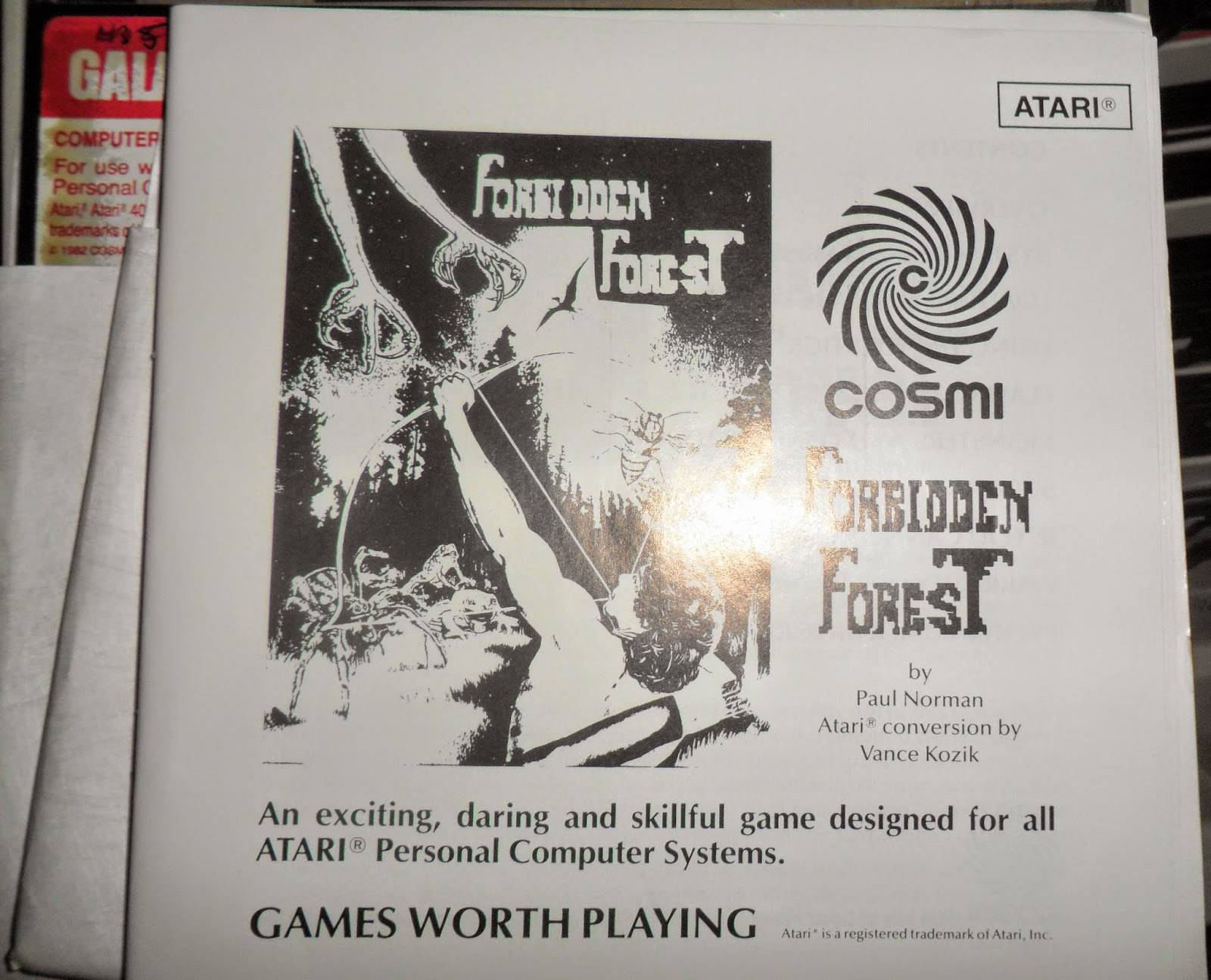 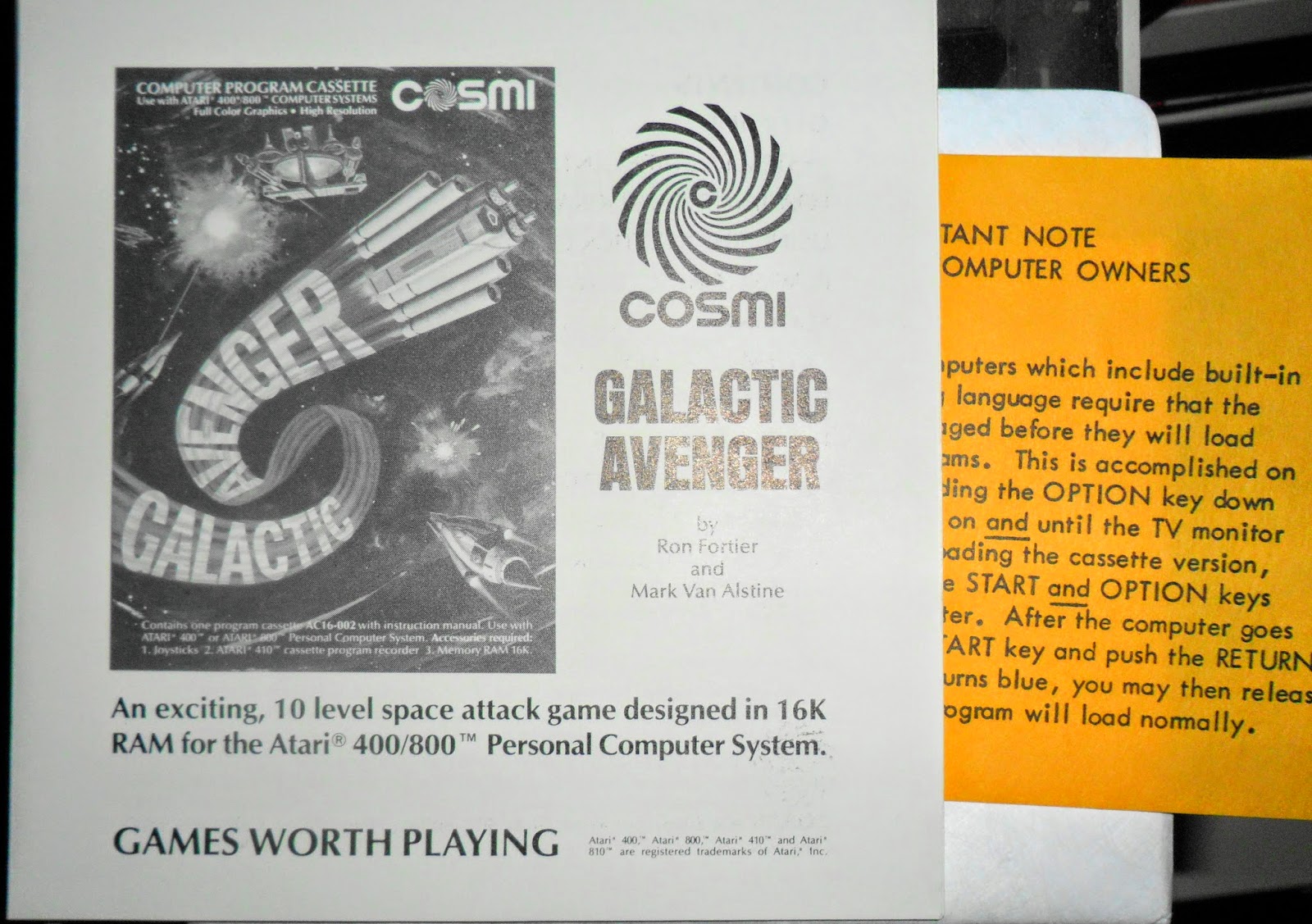 And a game I have never heard of before. 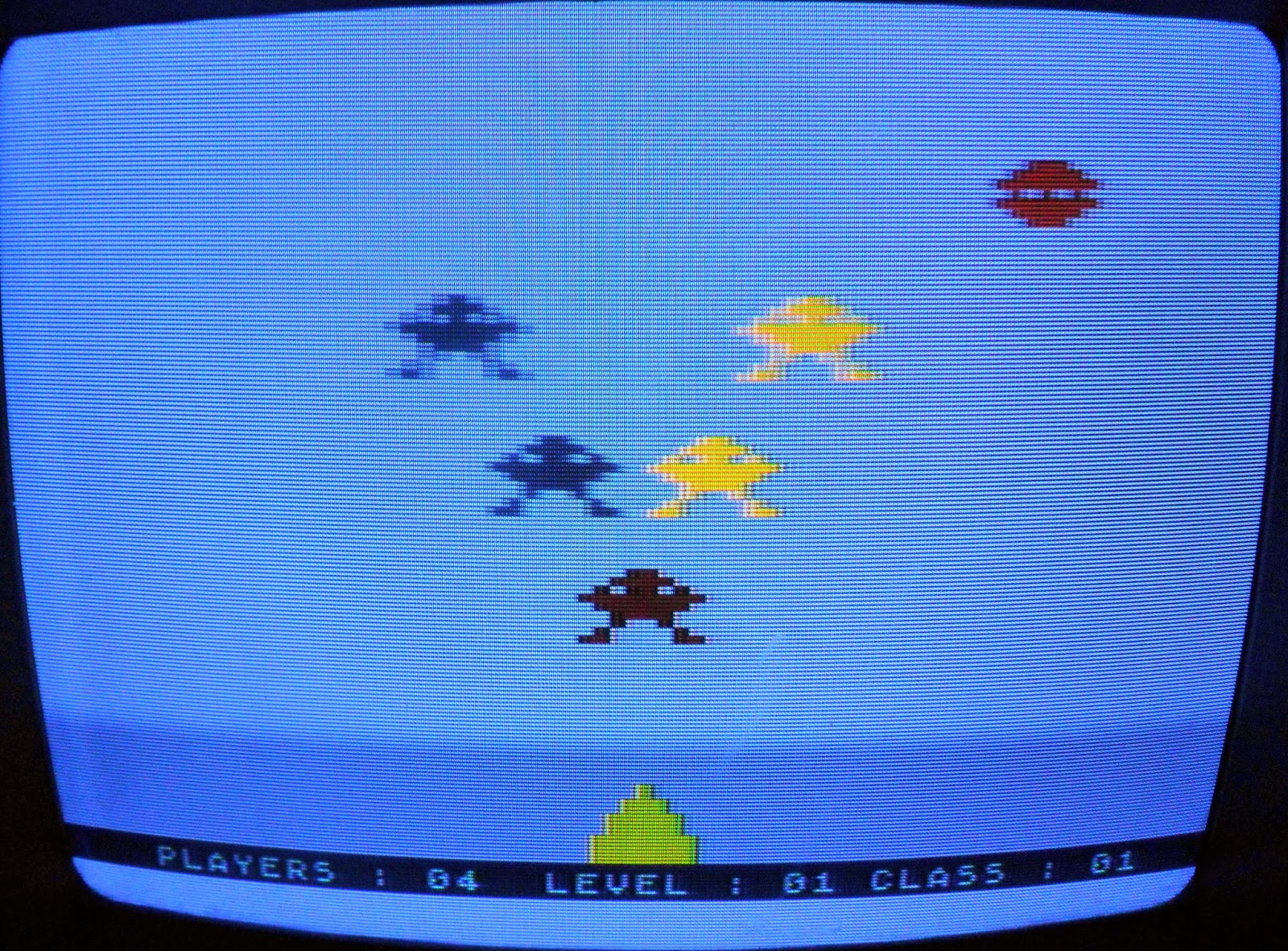 I am certainly going to have to read the manual because it seems weird and ugly as sin and I have no idea what the heck is going on.

There are still a few more possibly legit disks that came with the lot but I haven't gotten around to trying them and many seem to be utilities or Public Domain releases put on a disk with a dot matrix printed label.

I also need to open the Atari 800 up and see if I can't get the N key working.  Shaking it out and spraying compressed air did not help any and I would love to make the 800 my primary Atari 8 bit rig.