"Gaming is a Luxury"

As hobby gamers we have all heard this complaint every single damned time any new product comes out or any old product has a price hike.  (Ok the latter is 90% Games Workshop related but.. you get the point.)

Well over at the Escapist which is primarily an electronic gaming website, that magnificent fat bastard Jim Sterling has basically hit the nail on the head:  http://www.escapistmagazine.com/videos/view/jimquisition/5709-Videogames-Are-A-Luxury .

For those too lazy to click (or you just really hate Jim Sterling) he basically sums up that yes games are in fact a luxury, but that anyone who uses that excuse?

Elitist bastard who is probably well off financially.

And the very fact games are a luxury means when money is tight?

GAMES ARE THE FIRST THING TO GO.

This is wisdom.  This is even more pronounced in hobby games as we can generally keep using the products we already own into infinity provided someone will play them with us.  (Or we are happy enough to merely play solitaire if the game supports it.  Or even if it doesn't!)

When Games Workshop charges 50+ US dollars for five one inch tall unassembled, unpainted, and still on the sprue plastic toy soldiers we can comfortably avoid buying them.  We can hunt used ones on ebay much like the used videogame market, except there isn't any of that BS online pass garbage modern videogames are all doing to combat used sales.  We can proxy with cheaper equivalents.

Or.. we can do what so many people do and just QUIT GAMING.

Without a community most people won't buy hobby games.

If people aren't buying games or aren't buying them from brick and mortar shops because that 100 dollar Fantasy Flight megagame is 62 with free shipping online?

Well stores don't have money to stay open.  No open stores?  Most people have no place to be exposed to new games or find new people to play them with.  Meaning even online or ebay purchasers stop buying.  Which leads to companies either going out of business or doing the GW style of raising prices in a futile attempt to keep their income the same which leads to MORE online or used buying which turns the hobby into an ever shrinking toilet bowl as people leave and nobody new comes in.

Outside of the groggiest of grognards (going by the SA usage of the term), I doubt anyone can say bringing in new blood is a bad thing.  In fact to keep gaming alive new customers are essential.  People even in a thriving market will leave for whatever reasons.  (Like a rather amusing joke I heard Youtube retrogame guy Steve Benway say, "I used to play RPGs till I took a vagina to my penis".)

Over the years I have seen so many people look at wide eyed wonder at our miniatures battle games or our RPG games.  Then if the community doesn't run them off, the pricetag on the games DO.

Why do you think Magic keeps thriving in spite of it being a massive money sink?  Its CHEAP to get into, and there is a thriving casual scene with things like booster drafts or sealed deck tourneys, or block play which is both great and god awful all in one!

Even if people leave because like me they see the money sink and decide its not worth it, there is usually new blood to replace us because the initial cost of entry is under 20 bucks!

Now look at something like Warhammer with its 100 or so just for a starter set that won't even remotely be enough to genuinely play the game.

Then you see Warmachine/Hordes with its vastly smaller model sizes, its design allowing for players to scale up in purchases as they desire but be fun at all levels, and its sub 50 starting price and its no surprise why its doing so well.

So next time you complain about prices and some elitist prick brings out the luxury spiel?  Send em here and set em straight.

Because not only are they wrong, they are helping to kill off gaming.
Posted by Captain Rufus at Monday, May 14, 2012 2 comments:

I've been lazy at getting this done.  And dying horribly in Wizardry.  However, it is finally done and now you too may see what we did in the land of Pathfinder. 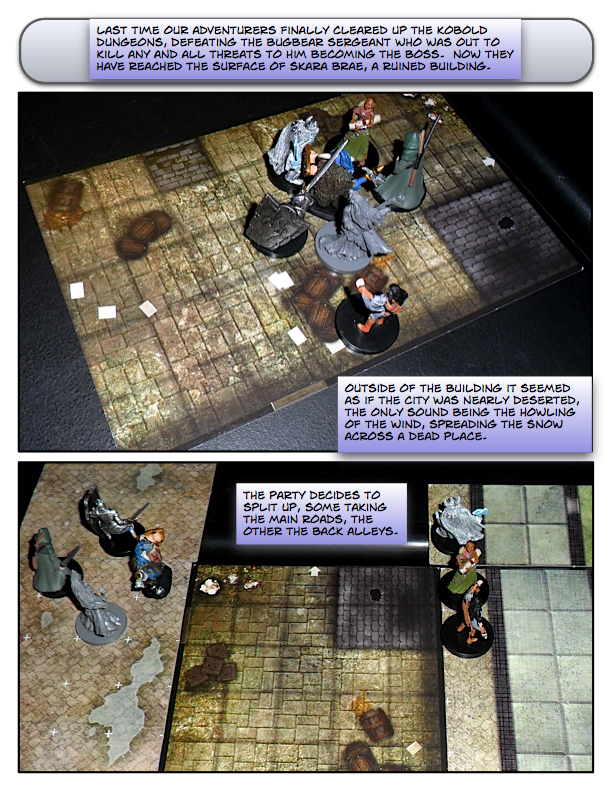 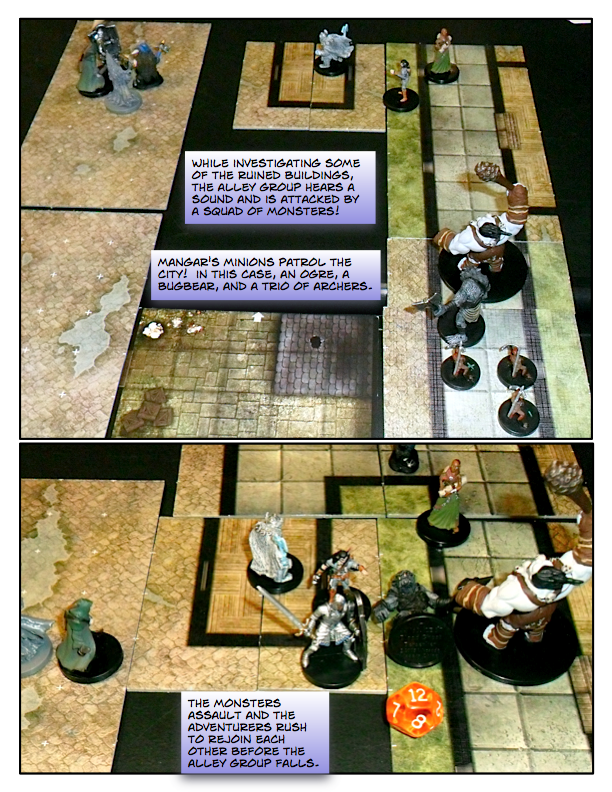 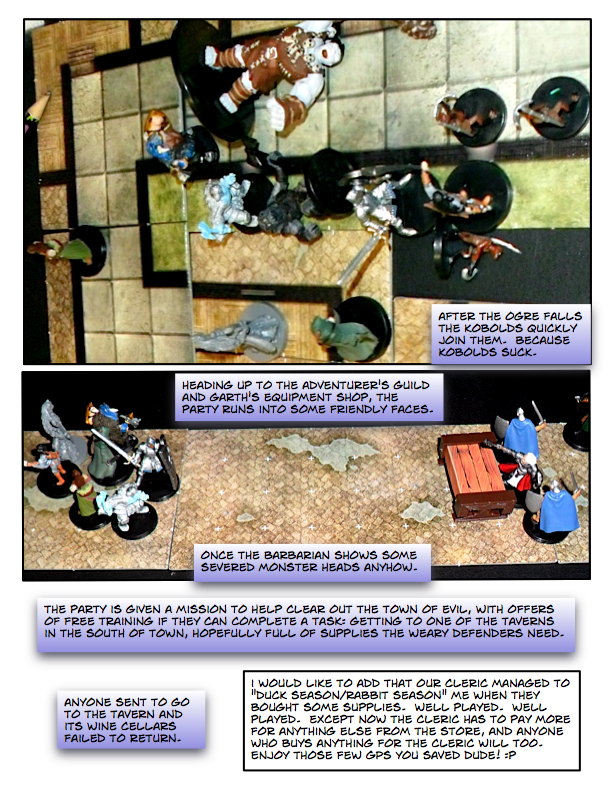 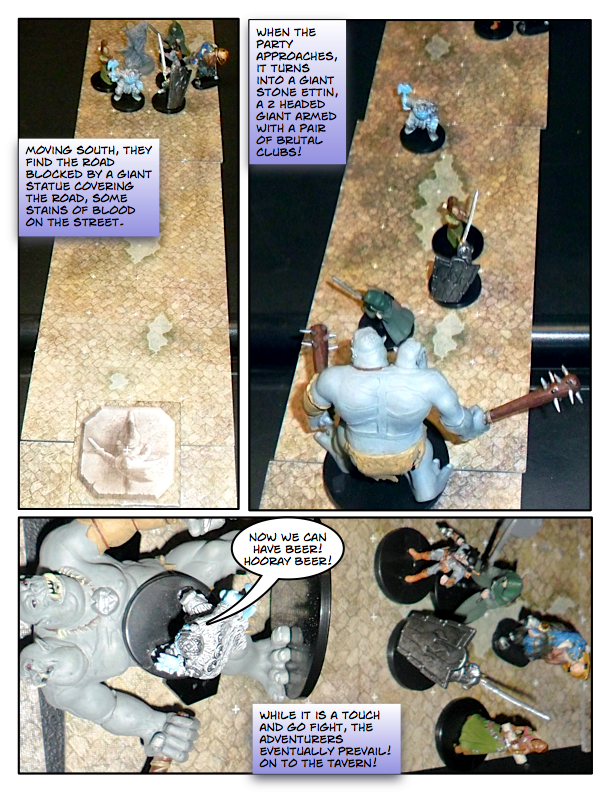 I'll probably have some funny/sad table tales from a game I almost played in this week.  But money has been tight so I have been picking up hours at work.  Cuz cash in fact does rule everything around me.  Also how else will I buy a 500 dollar video card even though 80% of the games I play on my PC tend to be 10 years older or more?

I meant to have this up last night to have my 4 posts a month minimum quota up but that didn't happen because I am a bad person with bad time management.  However its up now in its massive glory.

I even tried adding in some "funny" comments.  Hopefully my troupe of NINE players doesn't mind me putting words in their PC's mouths. 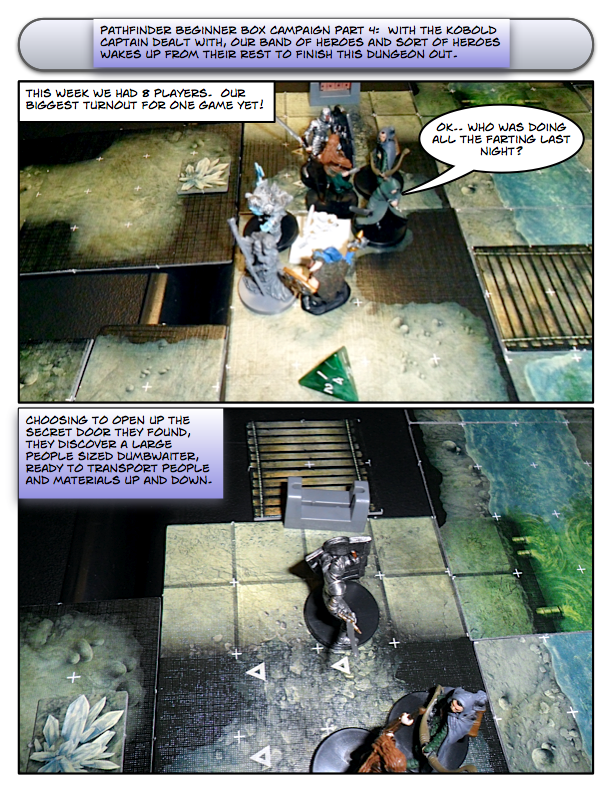 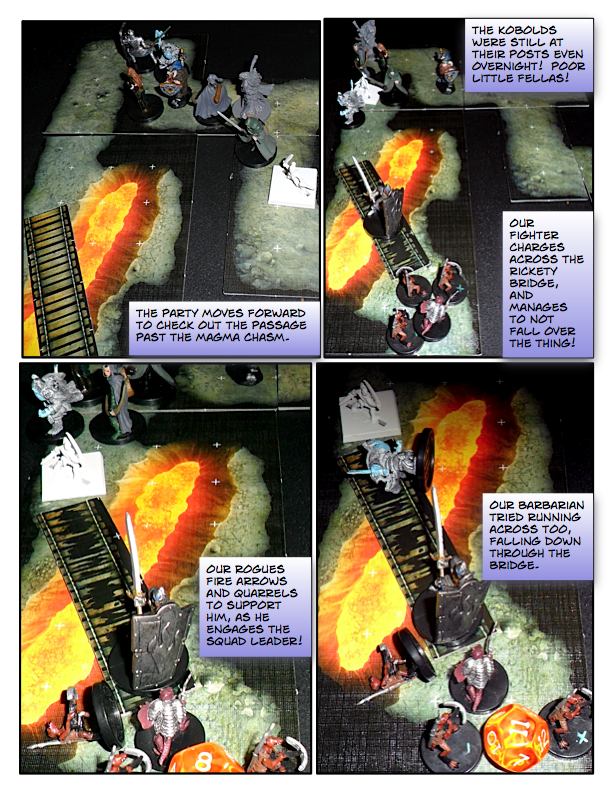 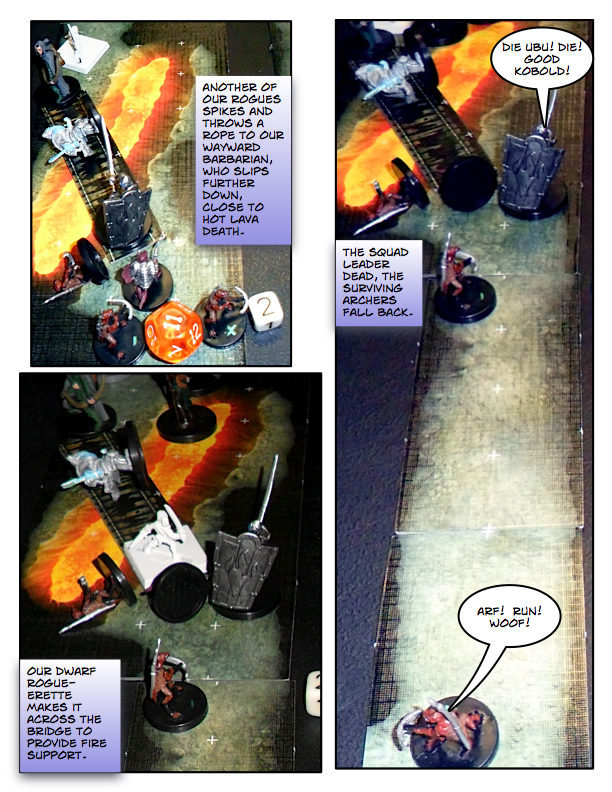 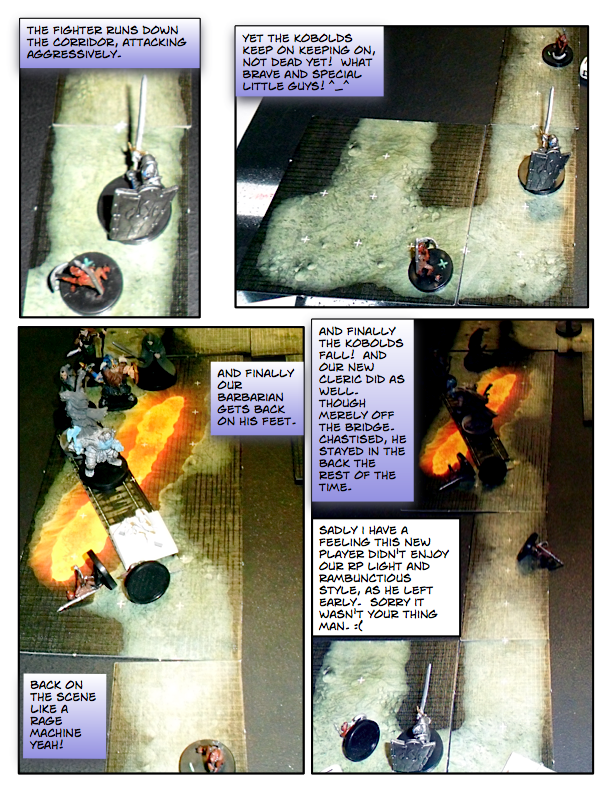 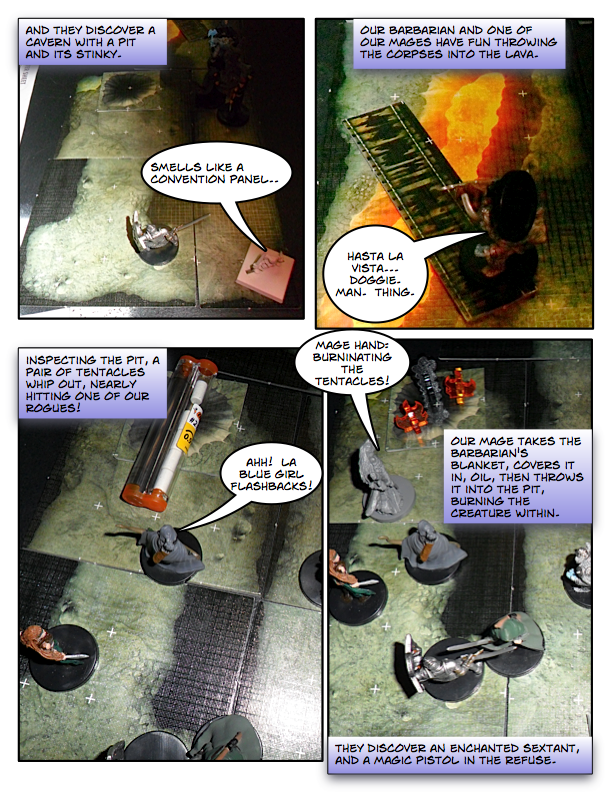 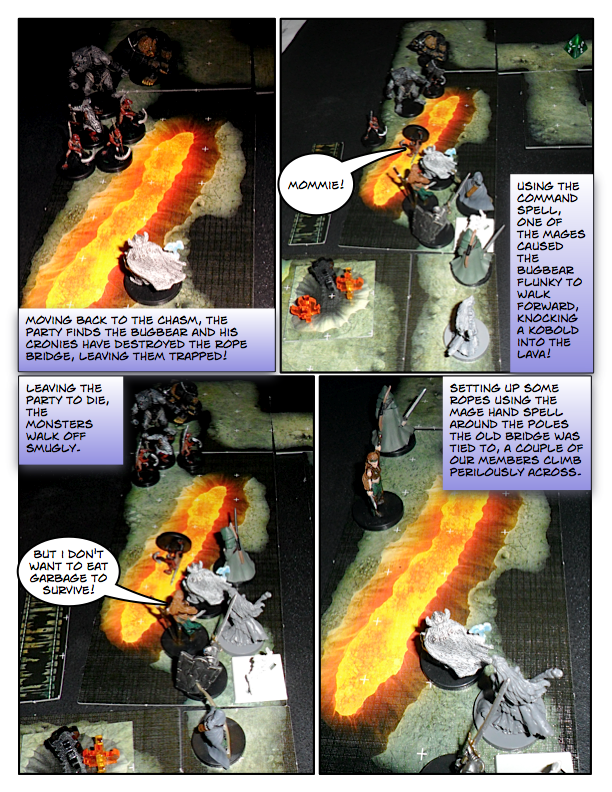 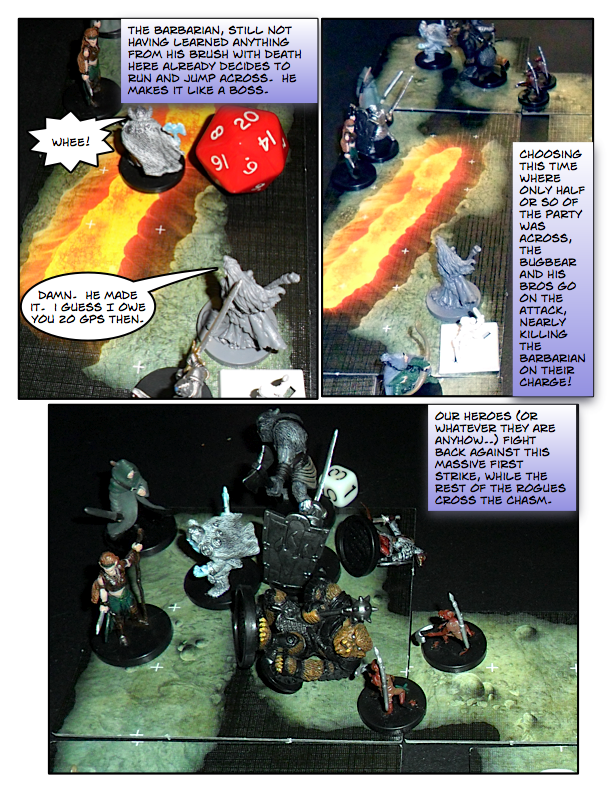 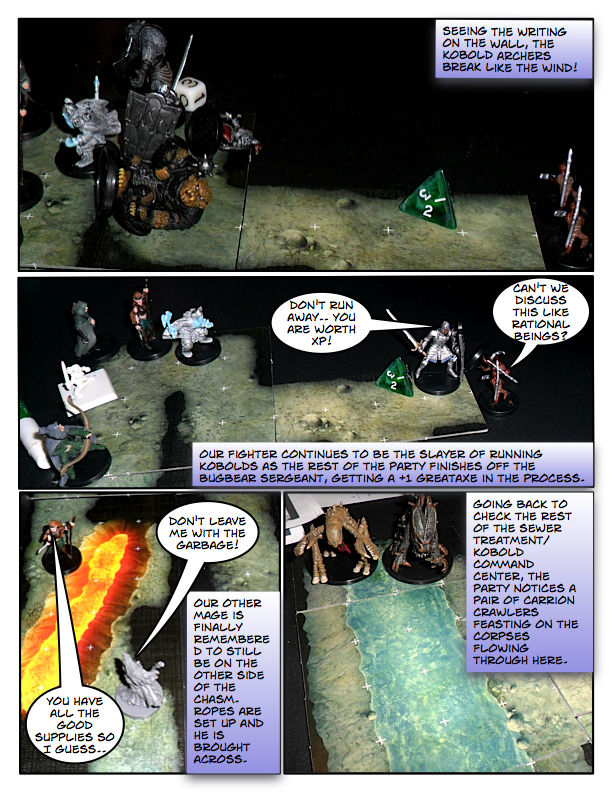 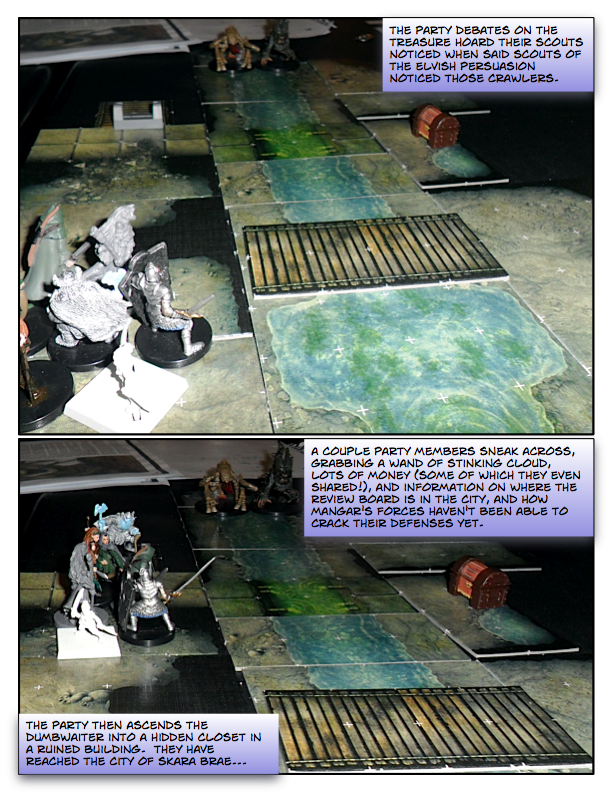 While I DO still feel bad the one new player left and really didn't give us a chance, I am obviously not going to change the entire style of the game around for him, especially when in general people seem to quite enjoy my game.  Sure its a loud rambunctious madhouse of 5-9 players all talking loudly and saying terrible things and my loud voice having to be louder to keep the chaos down to a dull roar as opposed to the Pit at a GWAR concert, (Though given some of our players they could probably out O_o GWAR if they wanted.  I keep them a lot below that.  They can go to a Cannibal Corpse show on their own!) but its FUN LIKE THAT.  Some of our players have never really played RPGs before and have told me they enjoy the monster bashing and the exploration as opposed to lots of in character discussion and such.

I really can't take that away from them for one new person who didn't really let me know what sort of game he liked.  He just claimed he had to leave about 2 hours in and basically seemed uninterested in our schedule, or any of the other games in the store I talked up.  (Like FASA Star Trek, Changeling, a GURPS Paranormal thing.  All of those games have a lot more RP in them.  My game is more a cinematic action adventure, heavily pickup based.)

I'm hoping he might come back and give us another shot but.. I won't hold my breath.  And honestly with NINE players we are probably bigger than we should be anyhow.  But folks can't always make every week which keeps things a bit saner but only barely.

Its a complete BLAST though.  And I have already declared we should play Paranoia sometime.  This group would provide so much fun for Friend Computer.

(Or what a friend on IRC said: "Kobolds Ate My Baby!".  He is wise for being from Pennsylvania!)
Posted by Captain Rufus at Tuesday, May 01, 2012 No comments: