Yep.  I gots me a big old cheapo lot of Atari 8 bit books to improve and enhance my Atari computing experience, and maybe even teach myself some programming finally!

Well one of the books from 1983 both comfortably fits in most of my work pants pockets and was short enough (240 pages) to be read in a couple hours without doing the tutorials. 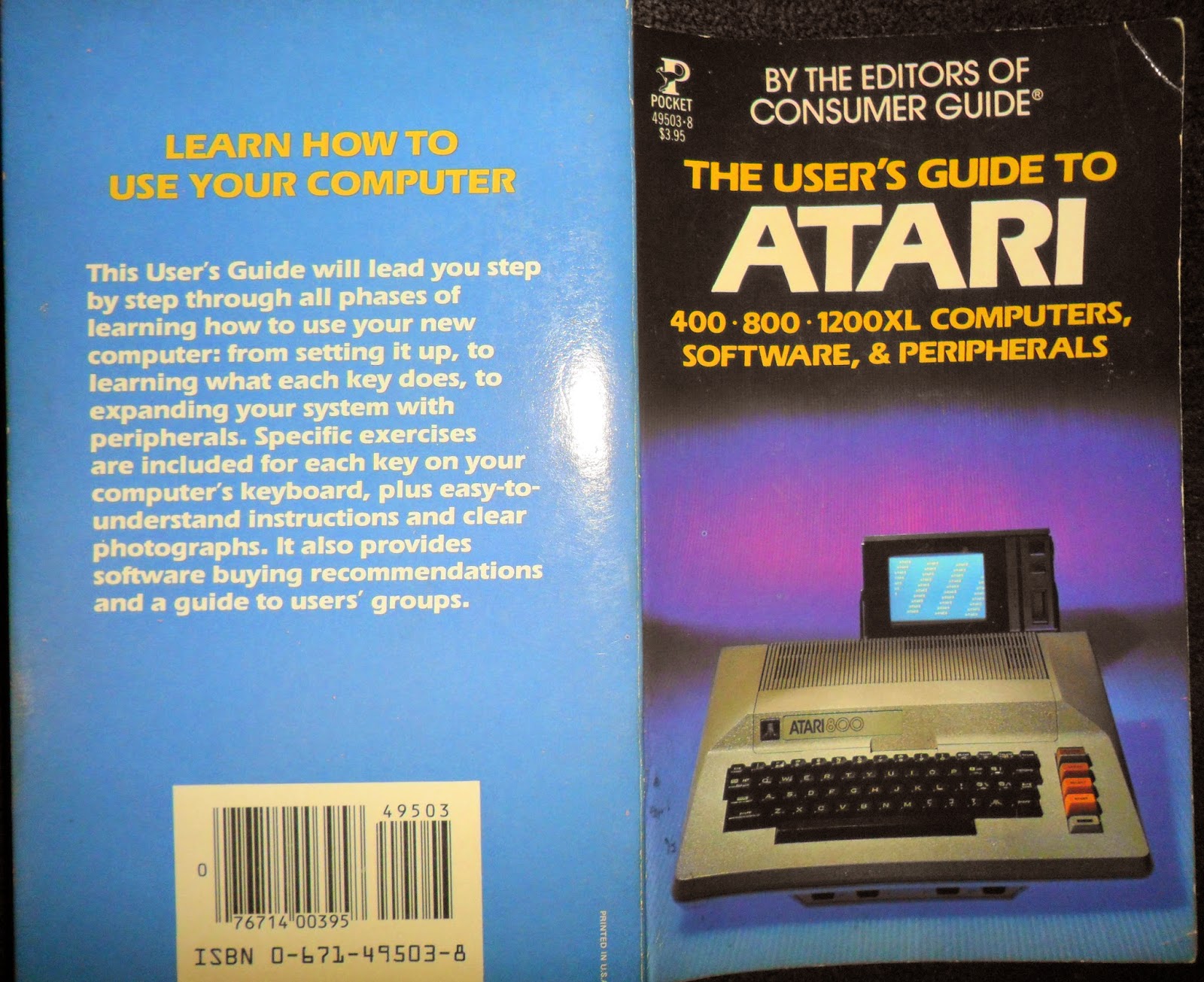 I have never heard of this magazine before but let's just presume it somehow covered computers and such without it being a focus kind of like Consumer Reports.  Given the massive title we will just call it The User's Guide to save my sanity.  Running 3.95 in December 1983 US Dollars this book is basically a newbie's guide to both setting up the computer and basic core operations. 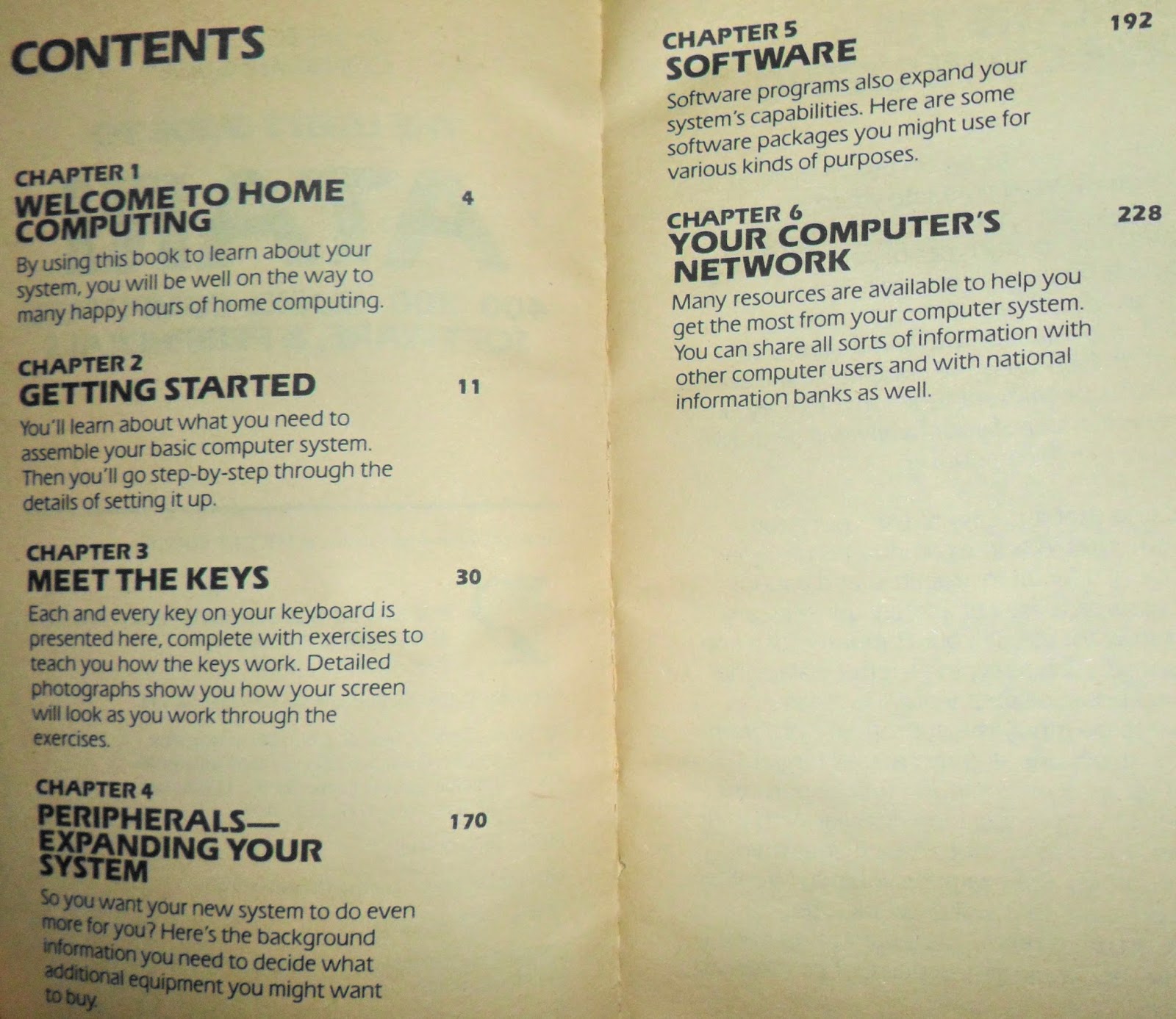 Our chapters!  Chapter 1 and 2 are like bog simple instructions anyone reading this blog or actually having a copy of the manual that came with your computer already would know.  But it has a nice basic overview of the Atari line they cover (The 400, 800, and 1200XL.  The other XLs are not mentioned nor is much made of the 1200's incompatibilities.), and how to hook them up to a normal VHF screw TV set of the era.  Not even Cable Ready Coax is mentioned!  There is info on the disk and tape drive peripherals as well which is nice and handy! 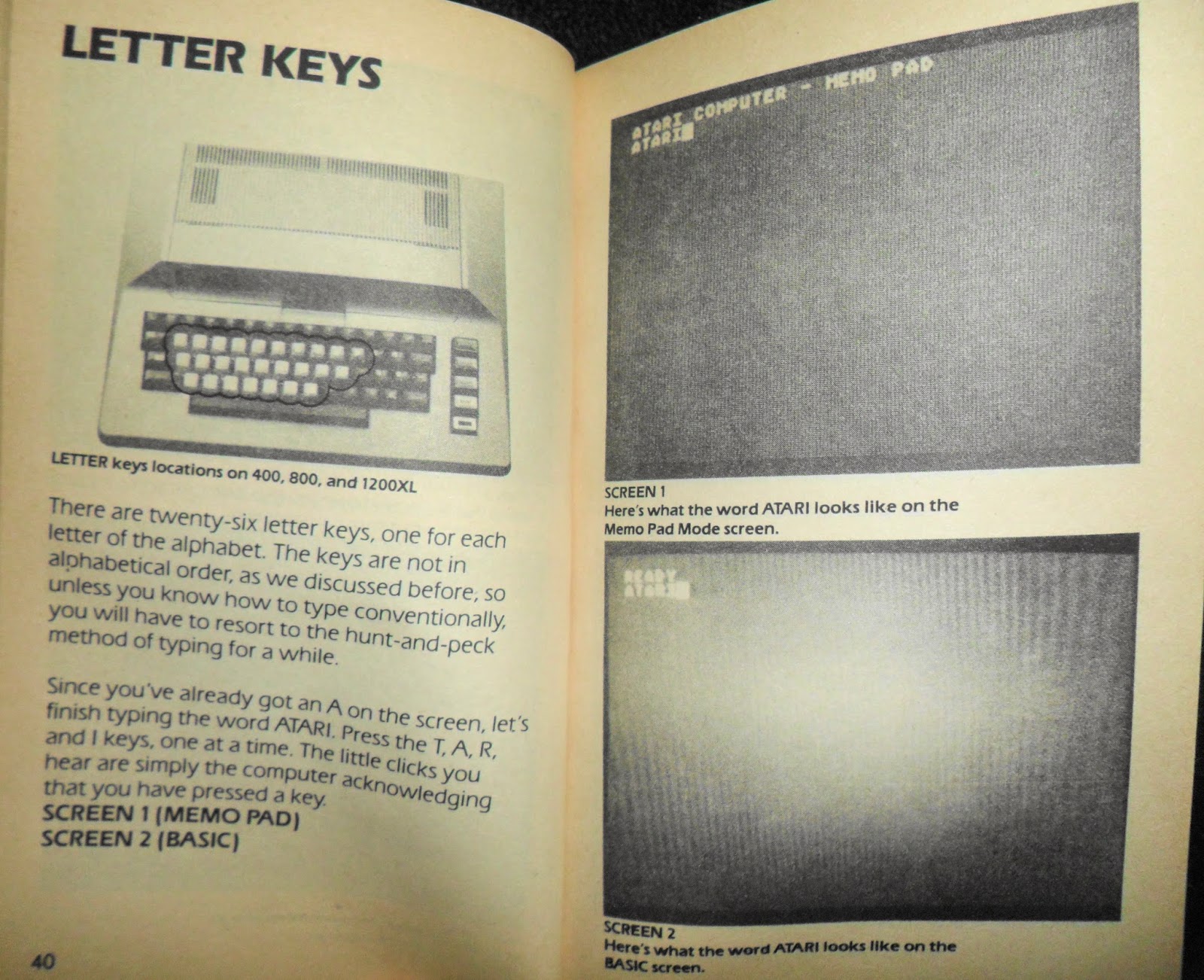 A major portion of this book is these tutorial exercises with photographs of the screen output and diagrams of what keys to press on the keyboard, usually showing the mighty 800 unit but not always.  Some of these are stupidly simple but given the time and how few people actually knew anything about operating any electronic devices it does kind of make a lot of sense. 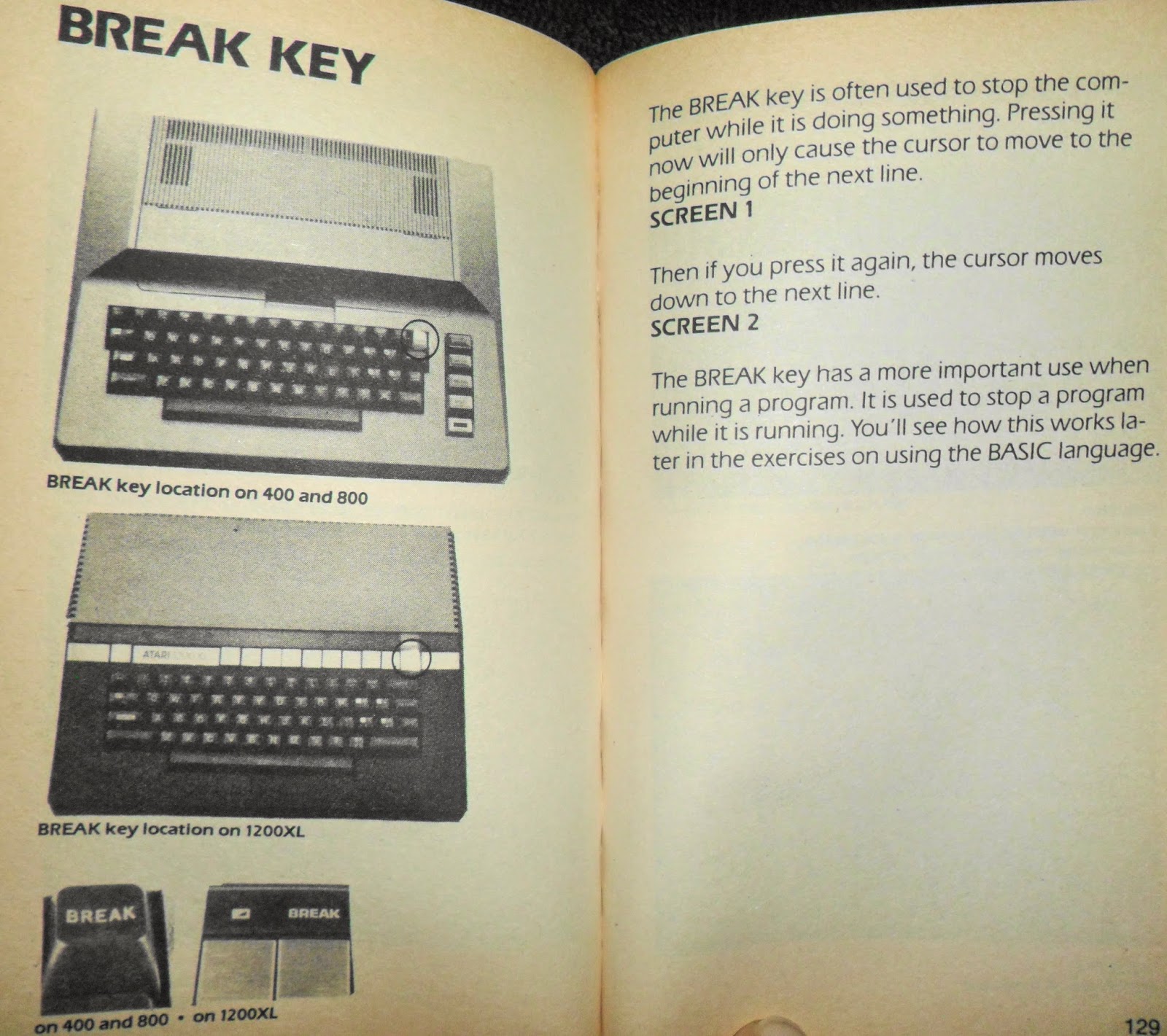 The book uses a large and easy to read font, and gives excellent tutorials on getting used to computer keys and how said keys operate on these here Atari computers.

The book is an excellent way to get used to your Atari 8 bit computer and how they operate, albeit from a pre popular XL/XE mindset.  A number of peripherals are covered with advice and info about what to buy, plus a very simple introduction to the simplest of BASIC programming commands.  For historian types there is mentions of pricing on various items such as TV Set/Color Monitor combo units being available for 500 to 800 dollars in 1983 money, or monochrome monitors capable of 80 column use for 100-250 bucks.  (And the need of a Bit3 Board.  Nothing we really need today unless you insist on coding directly on your old computer.)

The memory section has me salivating at the thought of Mosaic Memory Boards for the 800 which came in 32K and 64K versions. Could the 800's three memory slots work with them?  Could one get their original 800 up to 196K of RAM?  Would there be any incompatibilities?  These are questions I am now asking myself.  Because I want them.  It might make it so I wouldn't really ever need the 130XE again outside of being a backup machine.  (Or because I prefer its generally better video output.  Which could be even better if I want to spend around 120 dollars to solder a Lotharek board into it.)

Modems are pretty much useless nowadays, but the printer coverage really shows me I might want a Plotter type printer just because it is COOL.  (And depending on getting pens that work with it.  And software that can use it.)

The Software section covers how to make backup copies when possible on either tape or disk and lists some programs to buy and what machines said programs will work on and what format they come in.  They cover a handful of games and various educational and applications programs and also cover some programming languages since really until the 90s most people were generally expected to at least do some programming.

(Even if we all just mostly played games on the things!)

The book then covers User Groups which of course have none listed in Connecticut, Rhode Island, or Massachusetts. They even go into Compuserve and BBS stuff ending with a nearly two page listing of then active Atari BBS numbers and basic info about them.  No Connecticut or Rhode Island numbers yet again.

Connecticut just doesn't have that nerdy Soul it really ought to have.  A boring state most people try to run the hell away from outside of rich SOBs living on the western side who go to work in New York City.  A shameful state.

So overall this book is not really a must have for any retro Atari computer person but it is a NICE and HELPFUL book to have if you can score a copy cheap.

My review score?  Good.  If you can get it for under 10 dollars shipped and are a novice to the Ataris it is a really useful book.  Veterans probably can skip it though historians might enjoy some of the background information of the time.
Posted by Captain Rufus at Wednesday, September 03, 2014 3 comments:

Have you ever built a cool model kit or bought a rad toy but due to physics and the like you couldn't make it display as cool as it could be?

Well, if you have some compatible models and toys, the Bandai Action Base is the item for you!  Running roughly 10 bucks these bases come in a couple different colors and styles, and are designed for 1/144th scale and 1/100th scale Bandai Gundam model kits.  I went with their normal base in white.  Because that is all the store I bought it from had. 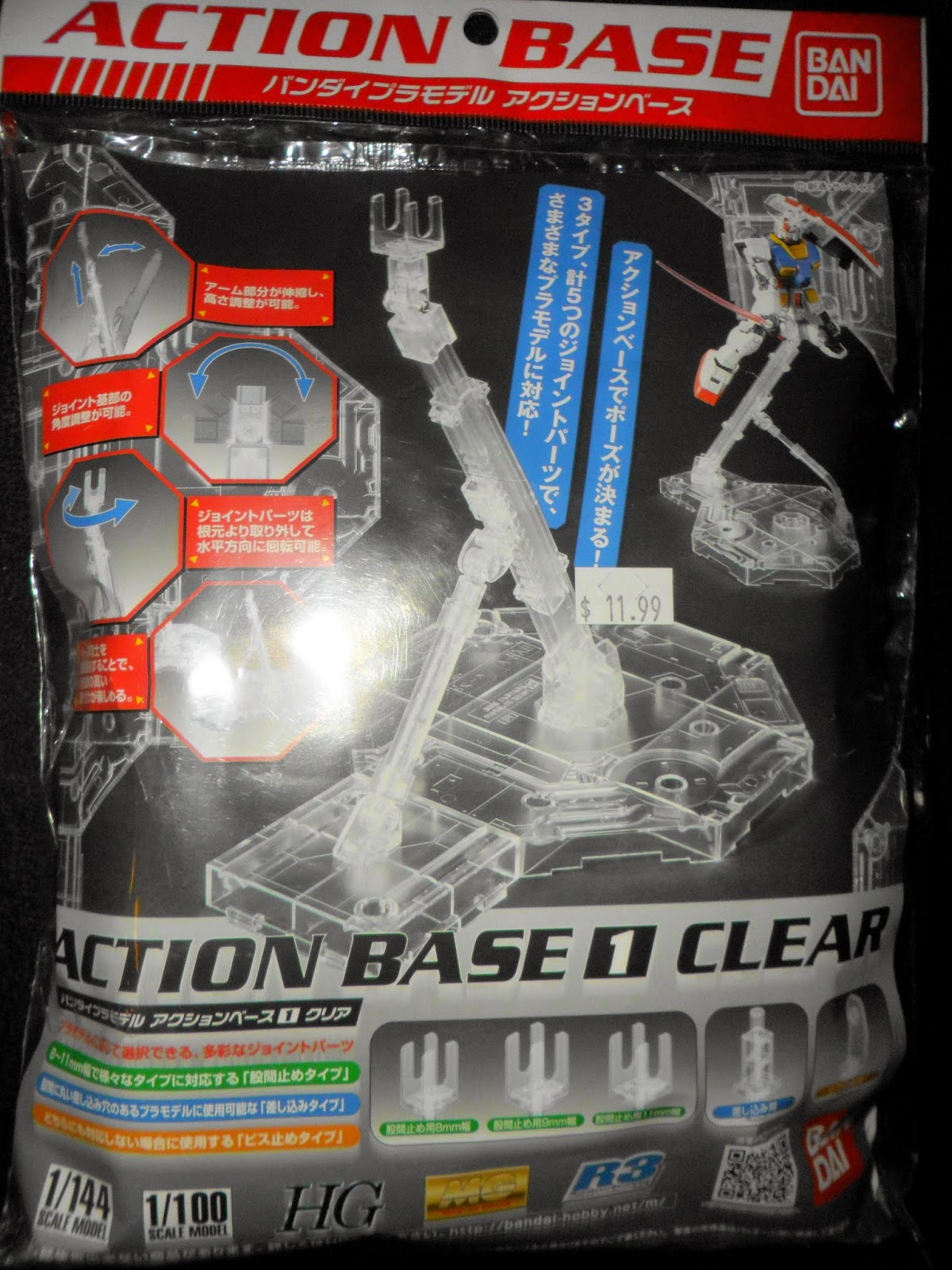 It comes in this big old plastic bag.  The front has a bunch of stuff in Japanese I can't read but is mostly clear as to what it can do. 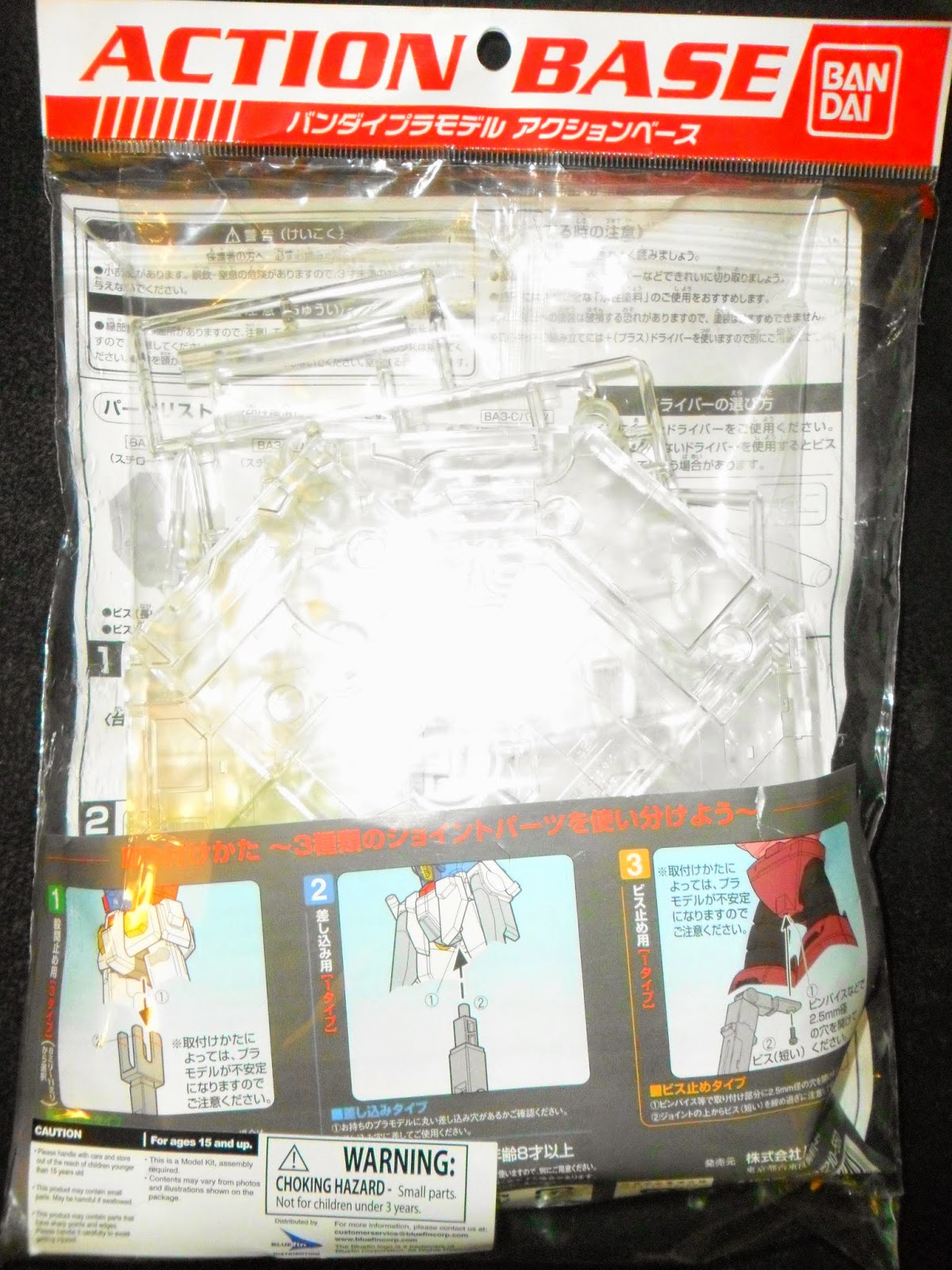 Flip it over and you see what is in the bag, and some images showing how you connect them to your model robots.  (The taint.  Its all about the taint.) 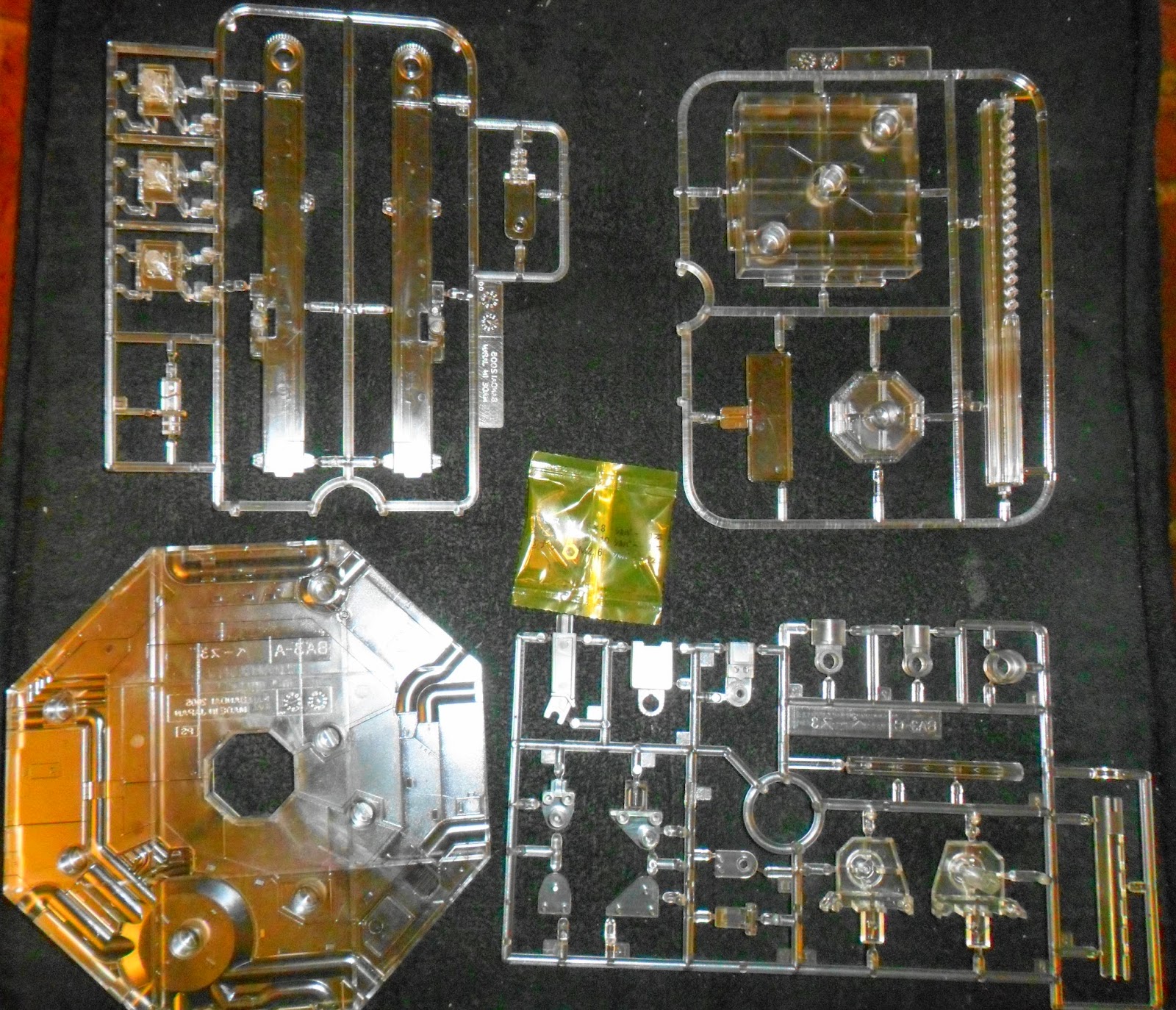 Opening the bag you get three sprues, the main octagonal base, and a couple screws/bolts. 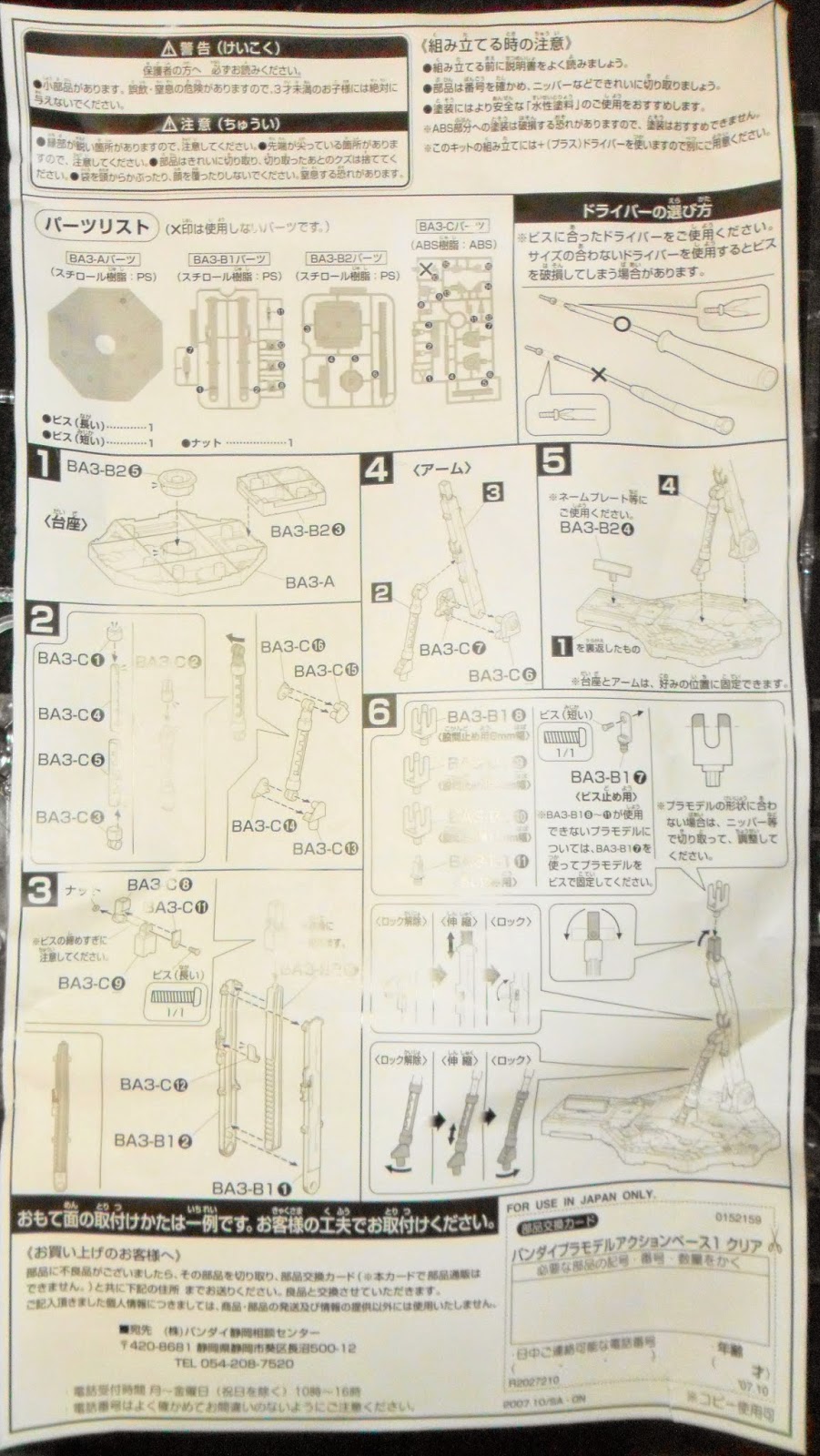 The one page of assembly instructions.  I was working slowly and watching Peter Capaldi being awesome in his famous role before he became the current Doctor of Gallifrey so it took me a little over an hour.  The instructions are generally clear except for one part I looked at incorrectly in the second step for the support beam.  Overall though it was a really easy build and being clear the gate marks are nowhere near as noticeable as they would be on any other of this type of base outside of white.  Except being clear one doesn't really have to care about sprucing it up with a wash or inking or anything.  I guess you COULD though.  Or even use a metallic flake spray on the underside of the main base to look darn fancy.  I am not sure I would recommend painting the poles though as they do have mechanical bits. 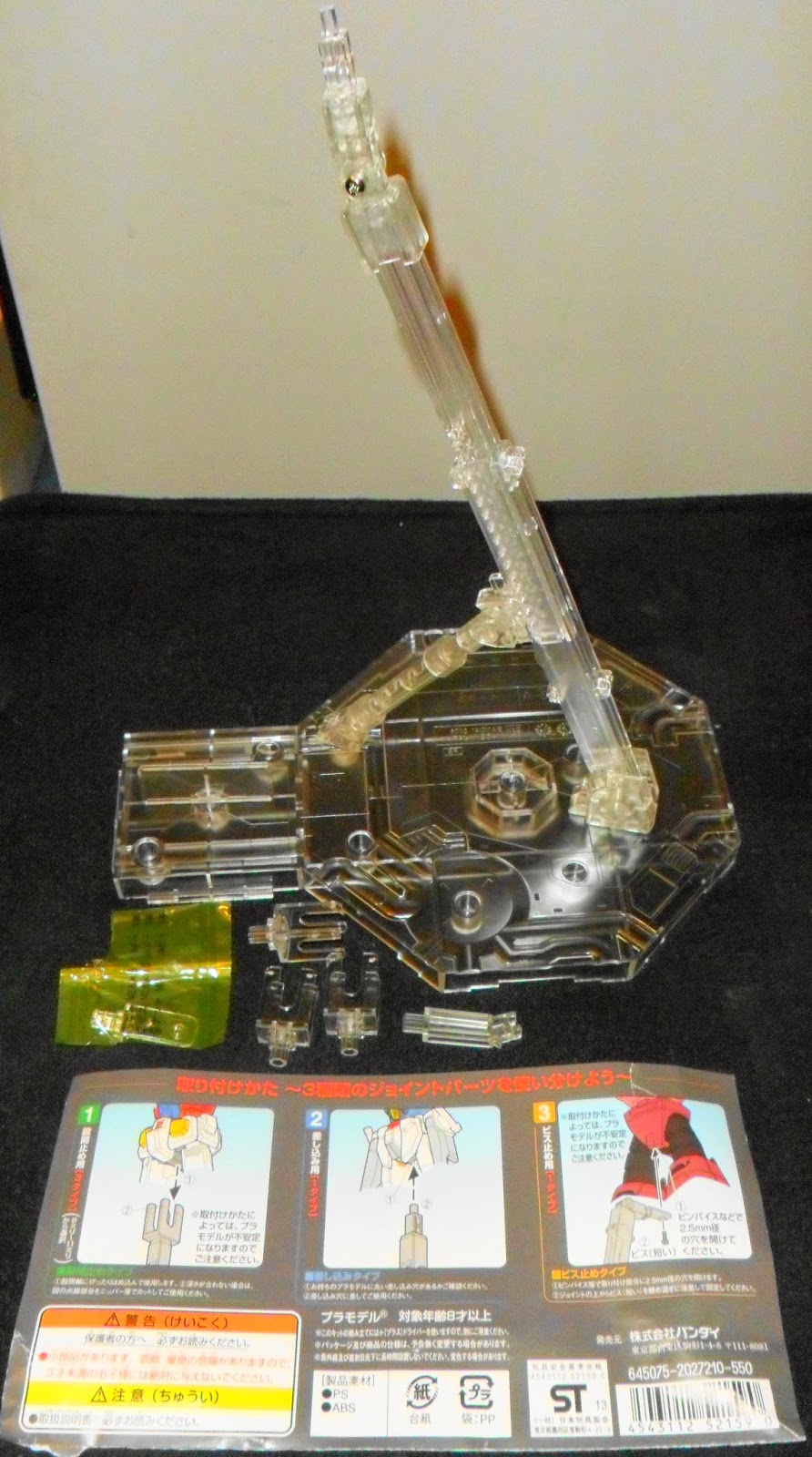 And here we go!  All assembled and pretty!  I have the default taint connector in place with the extra bits there in case I want to try any other kit or model with it.  The main poles can be moved around the holes on the base and the optional square extender piece.  With a couple sets you could use these extenders to display really large and heavy models safely, even possibly connecting them up to form battle scenes and whatnot!  (Something the Gundam faction logo bases or the GP Base look unable to do.  But they have their appeal as well..)

The bends are lightly ratcheted with indents to get a more reliable and sturdy stand and the core pole and the support strut both have locking elements to keep them put once you decide how to put it. 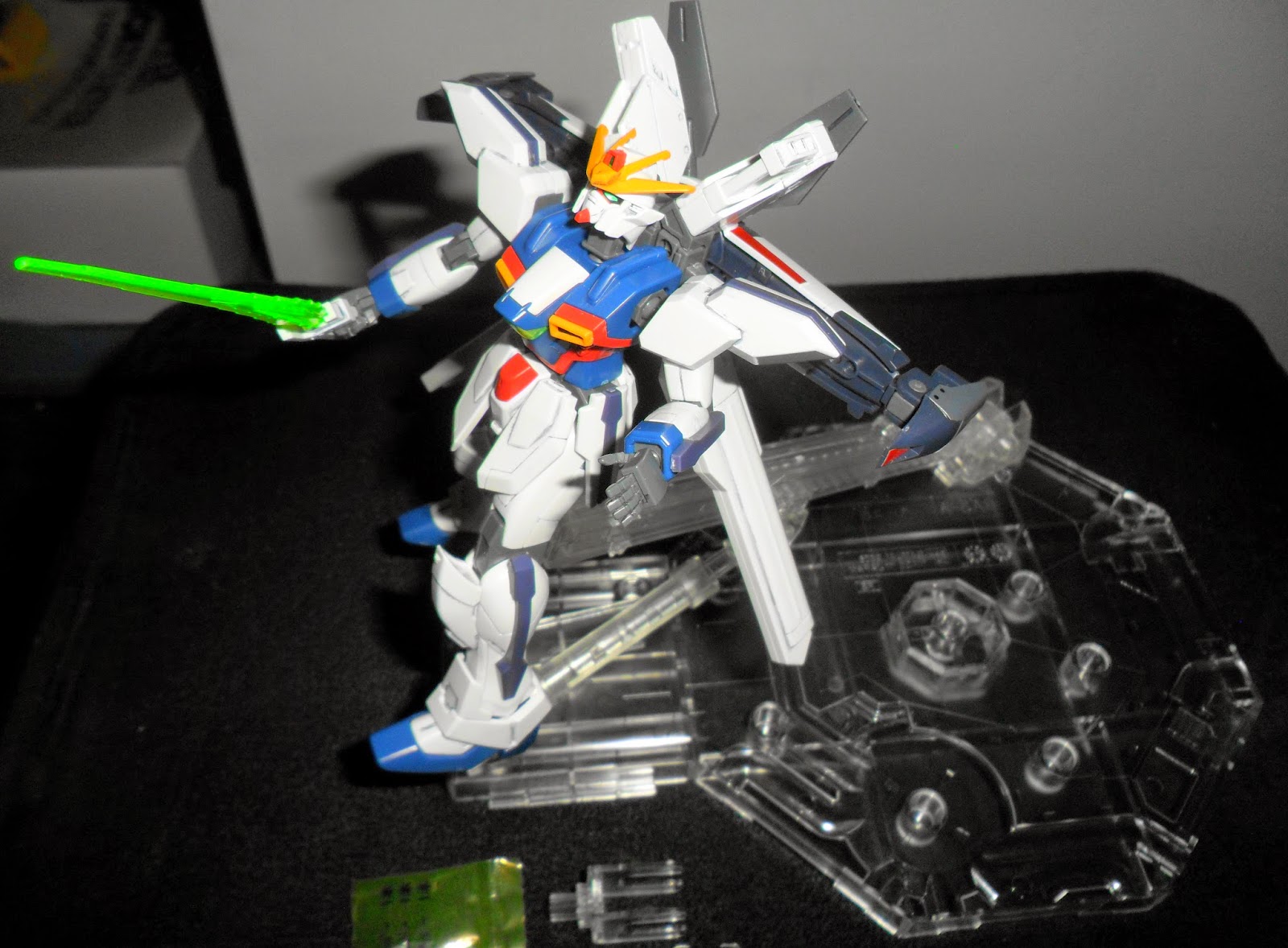 Here is a future blog review in it's 2/3rds or so of the way finished glory on the base.  Gundam X Divider, a 1/144 scale model kit of a more recent Bandai High Grade vintage.  It stands loud and proud being all Gundamy and such. 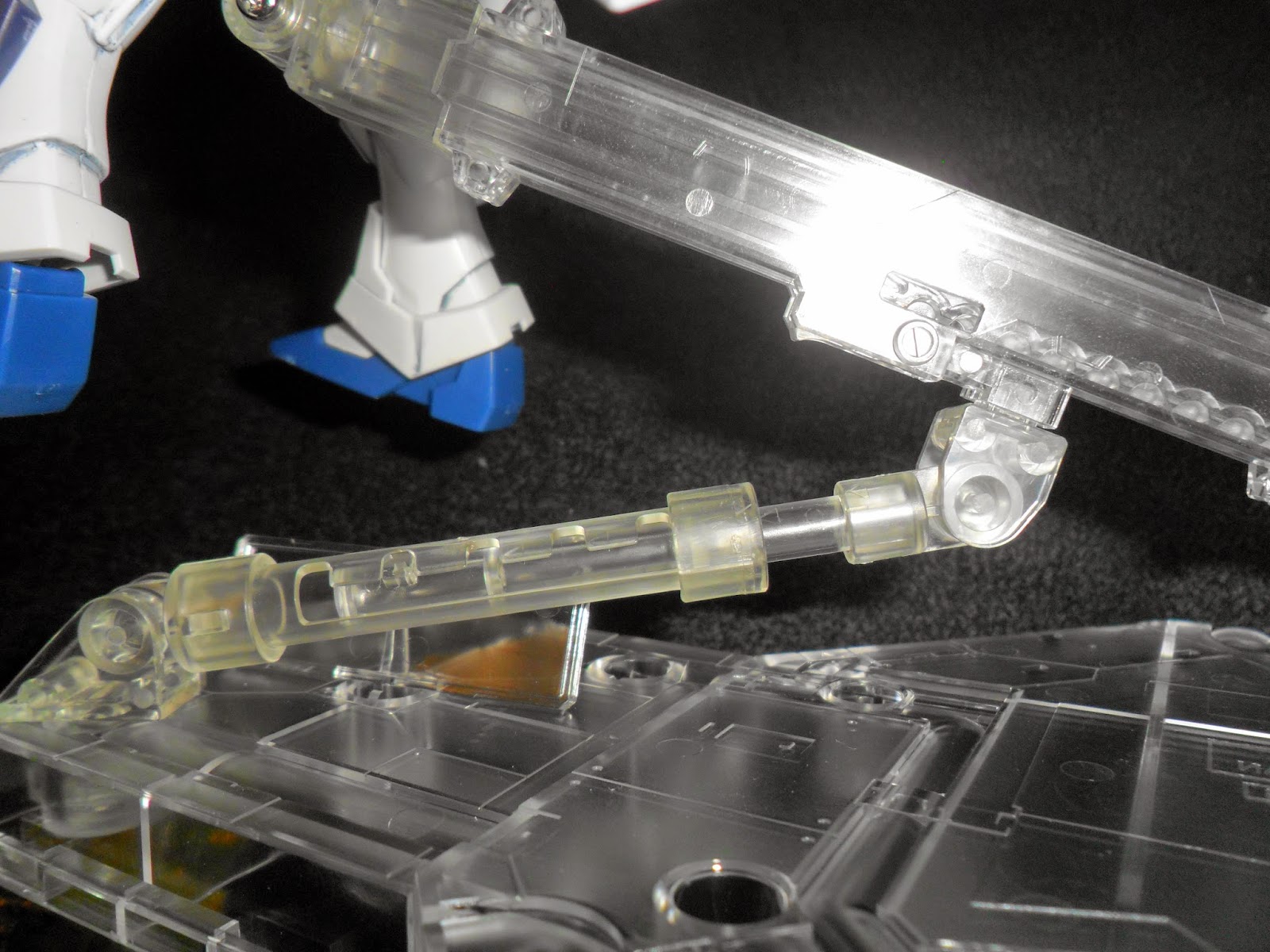 A close up of the locking elements.  The support strut has a slide and turn groove system while the main pole has a bunch of divots in the inside of it and a lever that will lock into place.  Nice!  You can also see a bit of a nameplate hiding out behind the support strut.

Raise the base high!  Make it low to the ground! Angle it for all sorts of poses! 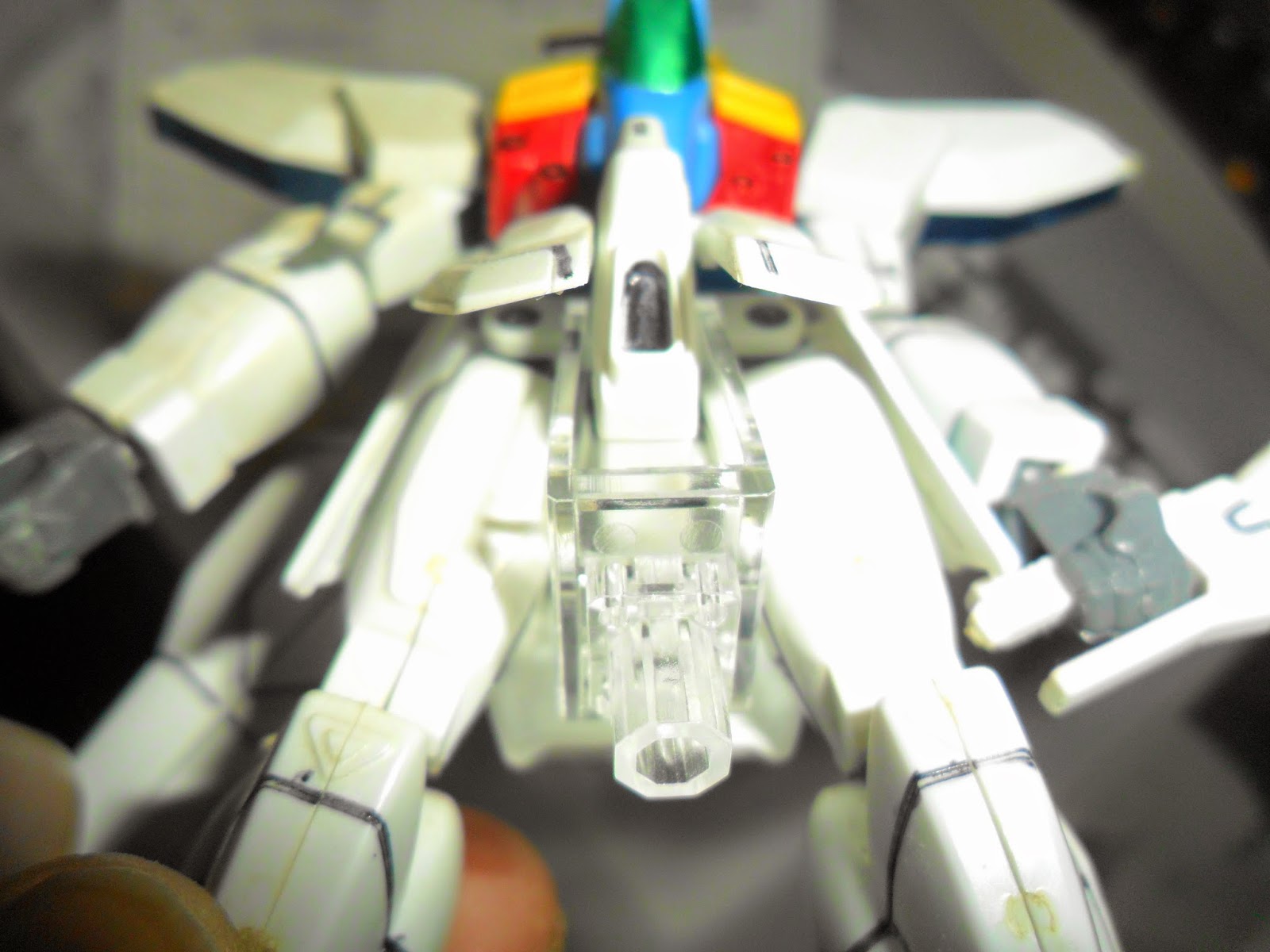 And we finish up with me showing one of the other connector parts shoved into a mid 90s 1/144 Gundam X kit.  It fits in alright but I had to test out all three of them to find the one that fit best and it does have some bending which is kind of a disquieting thing.

But with a little tweaking the possibilities for this nifty little device are endless.  At the 12 dollars I paid it is a bit too much but at the 7-9 they tend to run online it becomes almost a no brainer to pick a couple up to display current models.  Or even as a tool to help paint them.  Or to use in hobby gaming to denote height in a 3D space.

If you build models you probably want one.  If you build Gundam kits you REALLY want it!
Posted by Captain Rufus at Tuesday, September 02, 2014 No comments: