Yes I figured I might as well get one more post out before the year ends.  And whining about my insane lack of actual gaming doesn't seem like a reasonable thing to post now if maybe ever even though I super want to.  (I have grudges, heartaches, sorrows, and regrets including my own screw ups.  SO.  MANY.)

But let's get on with the show so I can like spend the rest of my non working and sleeping 2019 playing Dark Souls Remastered and maybe complete it before 2020 starts.  (I probably won't as I am towards the end of the game but have the content that was originally DLC to go through before the last two main bits and its tough.) 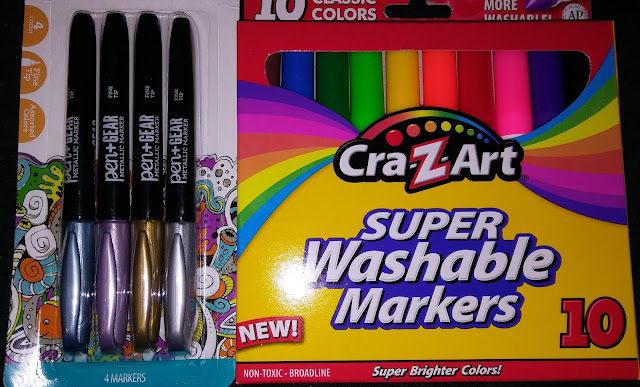 One thing I strongly recommend for these sets is some magic markers, paint pens, or maybe even some brush work.  It really does add a lot to the pieces for a couple bucks.  I have grabbed a few extra even thinner point markers as to cut down on the spillover that sometimes hit the printed bits. 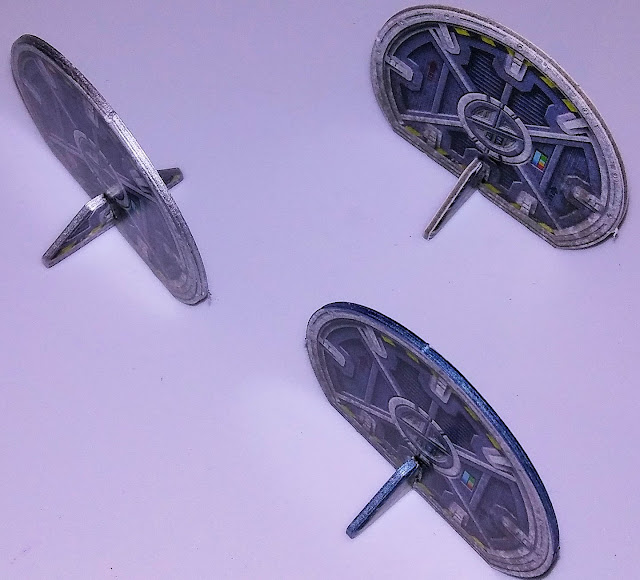 The upper right corner is a door airlock just popped out.  The  other two show what just a quick run through with a metallic paint marker does. 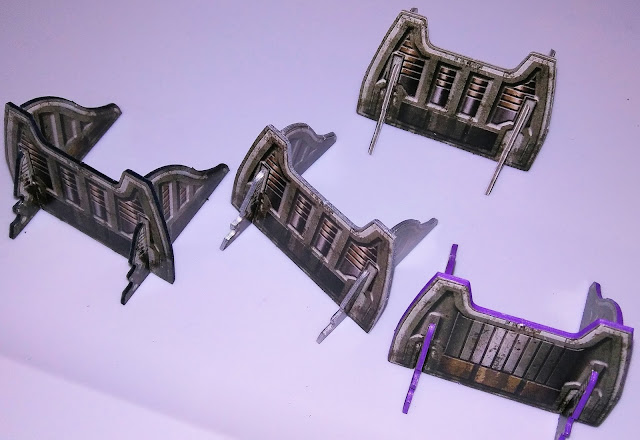 Again upper right is just popped out, the three bottom ones show a variety of colors.  I think the silver works the best but maybe a bit of wash over the top for that extra something? 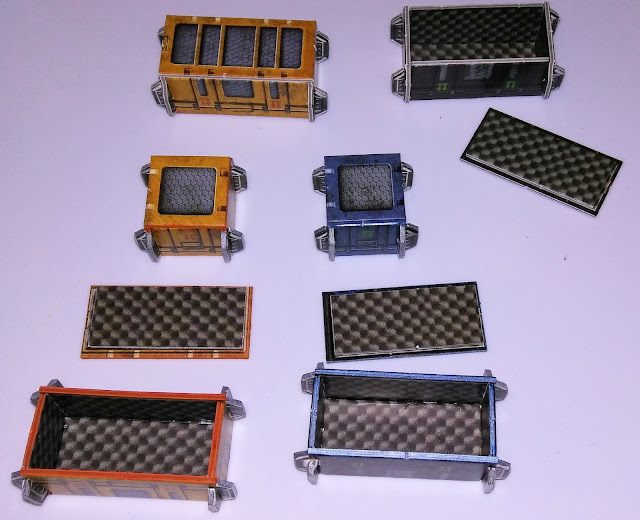 The top two are popped out, the rest are done up with both silver for the metal bits, and a similar to the piece's main color for the rest.

The two center pieces straight assembled with the outer ones done in close colors with even some of the interior fold sections done up in a similar marker color.  Not perfect but it helps a bunch! 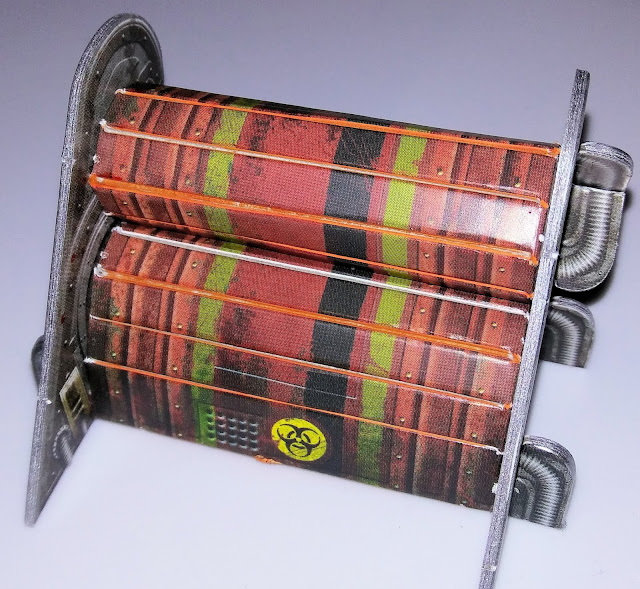 And a little close up example of doing a quick marker run in the interior visible folds.  The more work you want to do the better it gets.  But is all that effort really worth it?  Yeah probably not but that is the great thing about this stuff.  The more effort you put in the better it gets but its good STOCK BUILT.  A thing the miniatures gaming community seems to despise in general whereas say the model kit building community has learned is a way to get new enthusiastic blood involved.  Start with a Snap Tite or a cheap Gundam kit that looks decent enough with just basic tools and evolve as you go. 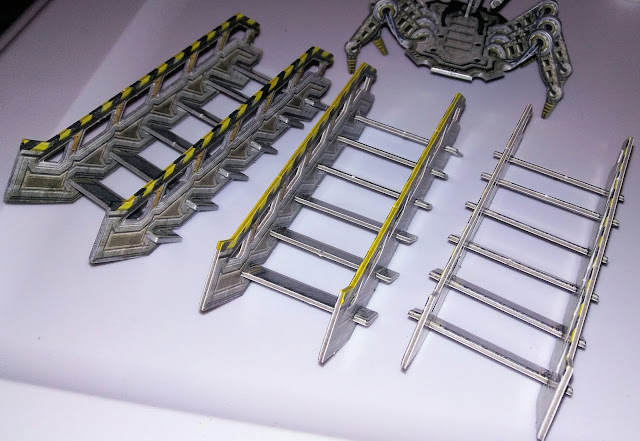 And right to left again.  From stairs built straight, a little yellow on the hazard railing, to trying to match the black hazard stripes over the yellow and covering all the other bits in silver.  It takes a while but hot damn it looks nice!

Yet now we get into a pair of 110 bucks at the store box sets I got through trading off my five row long box of Magic cards only leaving me with like 7-9 play decks.  Freeing me from Magic and the fact my collection of mostly Dark through Homelands cards plus a bit of Kamigawa and Ravnica block cannot really be used in most active play formats these days!

(I got 275 bucks in store credit which is possibly close to how much money I spent on Magic over the years anyhow.  I maybe bought a single booster box, a few starters or fat packs, then odd booster packs.  I more or less got my money back while still having a fair number of decks to play casually.) 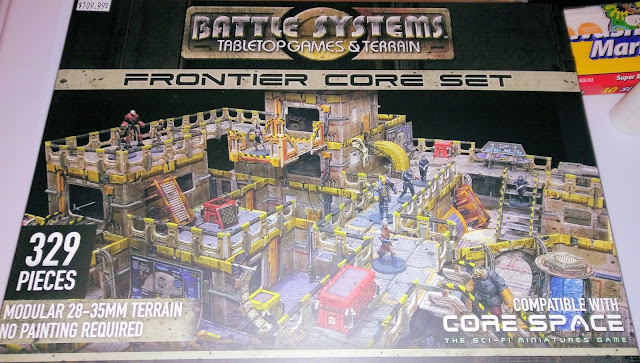 This set is a big old hefty box! 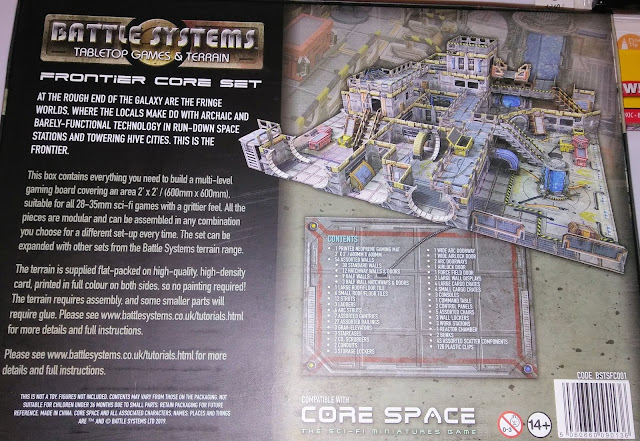 Does this stuff not look rad or what? 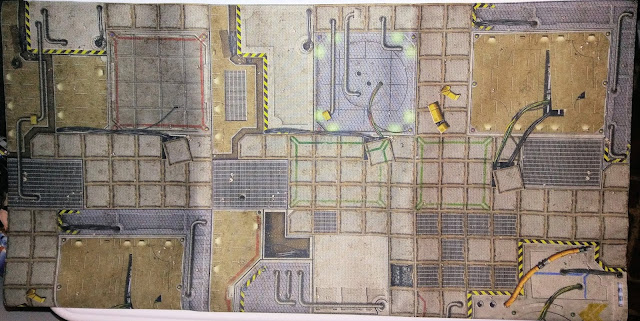 Comes with this nice thick play mat made of mouse pad type material. 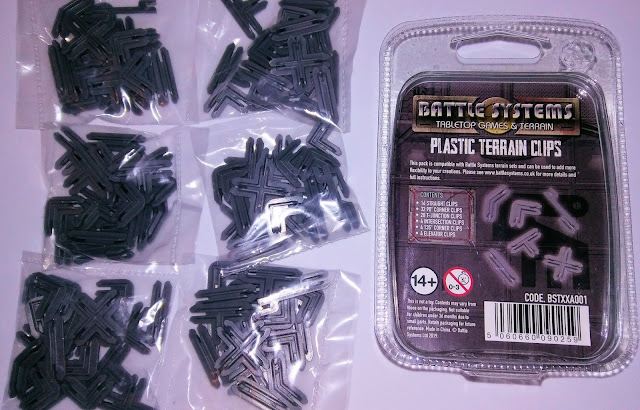 It has gobs of those plastic connector bits.  I used some of the store credit to grab another little pack for my existing stuff.  And just to have options. 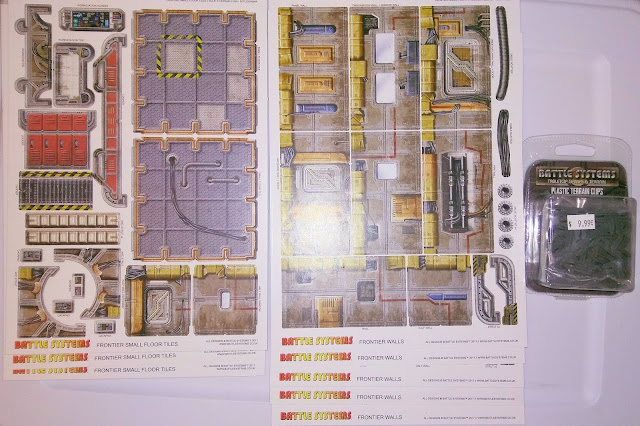 A lot of this yall saw before in my previous review post and some of it is in the next thing I got so for now we just know what you get in the big box giving you effectively a complete sci fi battlefield in a single go with plenty of flexibility. 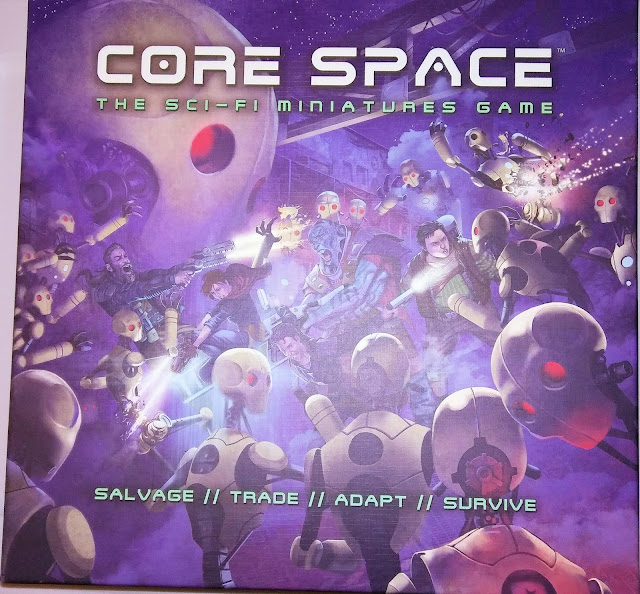 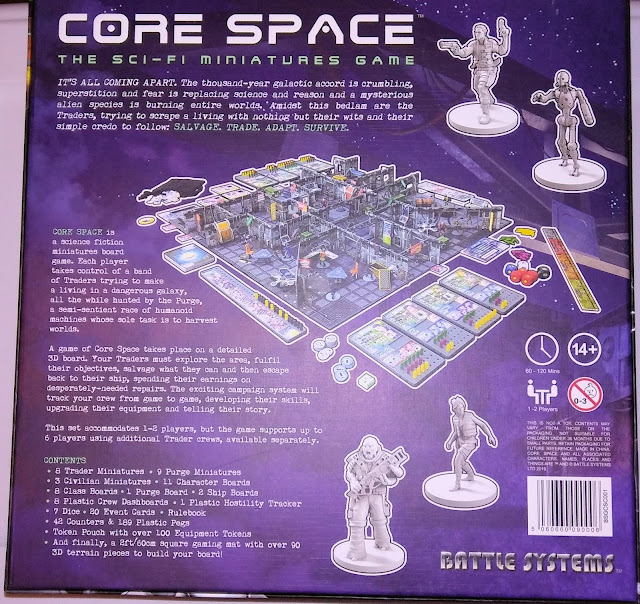 This was the same cost as the terrain box above but is an actual game.  I say it is Pirates of Dark Water meets Firefly (Or superior pirate/cowboy in space series.).  The game is a bit like Warhammer Quest Blackstone Fortress only with more RPG elements and more flexibility.  However you get way fewer models in the set but way better terrain and game rules. 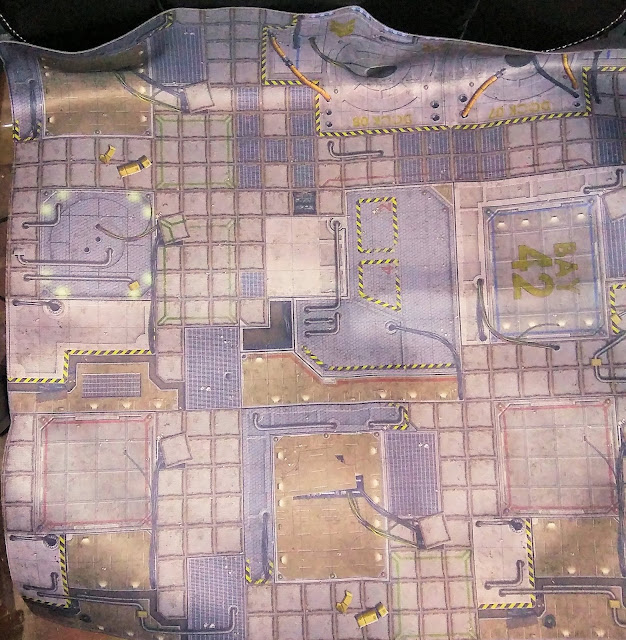 The mat here is pretty much exactly like the one above.  Slightly different color and maybe an 8th inch larger or smaller. 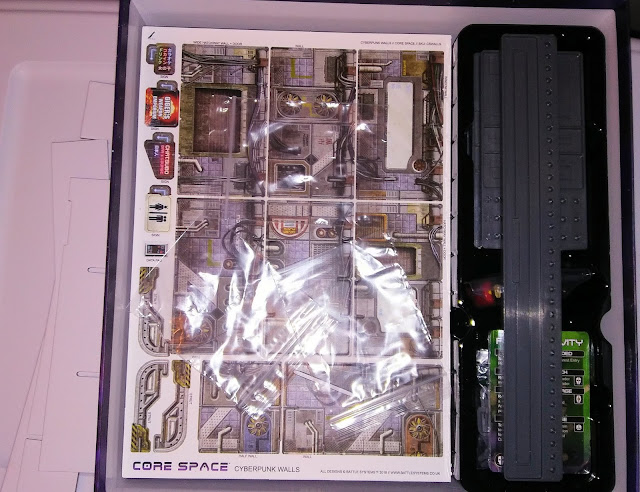 It comes nicely packed with STUFF. 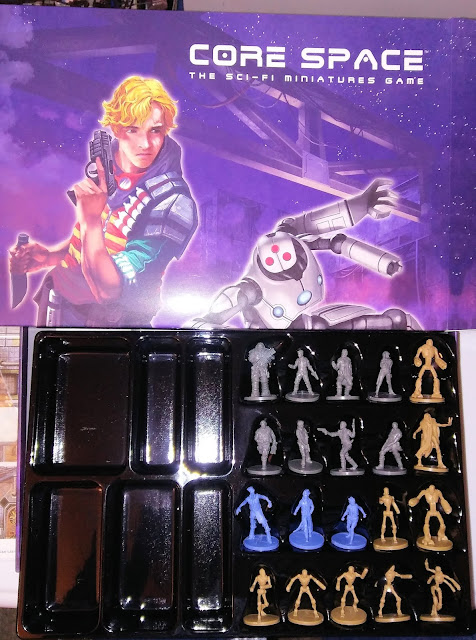 Not only are the minis preassembled but they have their own box and space on the side for more crews or counters.  Because of course there are expansions. 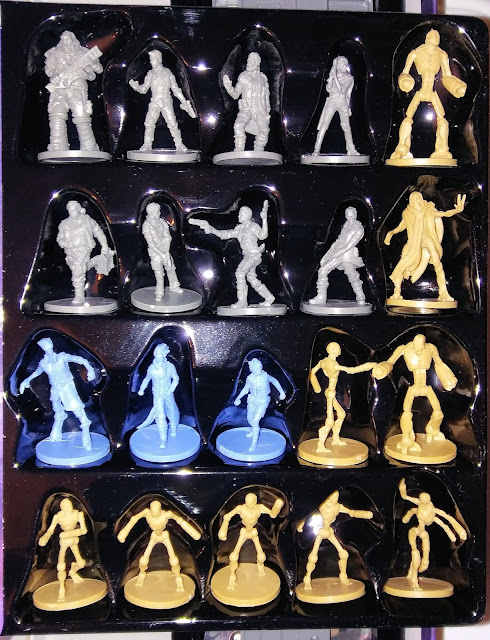 A close up of the models conveniently color coded into Ship Crews, Purge, and Civilians. 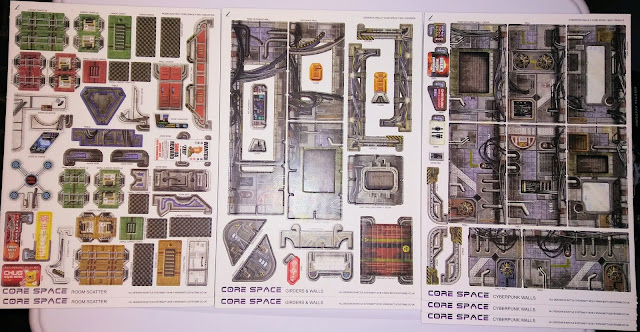 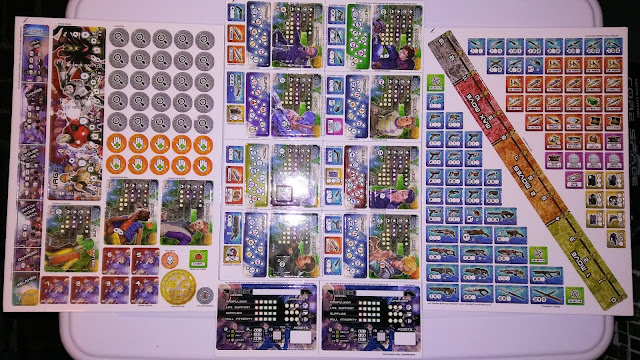 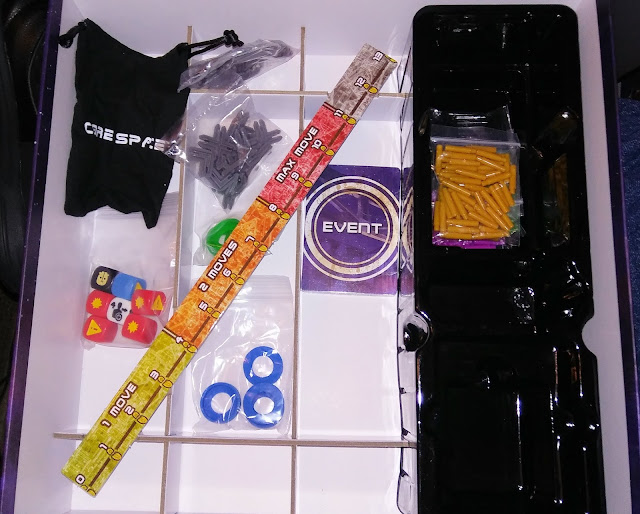 The other components including dice, range ruler, and so on.  The cardboard divider is even set up in a way to let the ruler rest on top flat. 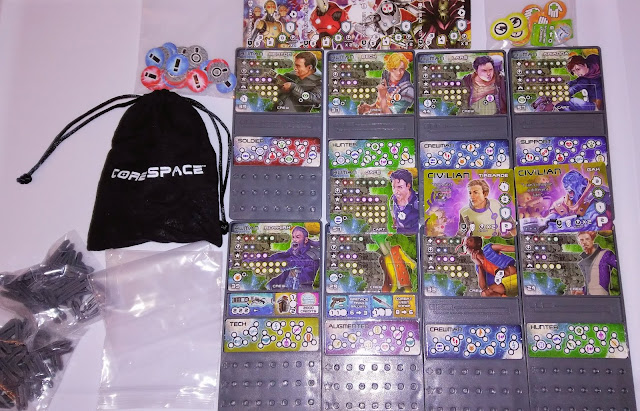 Some of the character sheets in their trays with a few equipment items on them.  You can use a dry erase marker and some of the colored pegs to keep track of your dudes as they do stuff. 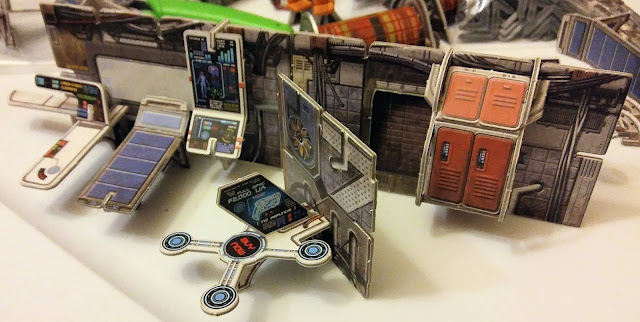 Some of the new terrain parts are more or less designed to clip into wall segments and are not free standing.  This is a tad annoying but it looks really nice.

Most of the non wall terrain elements.  As always I recommend some white glue to keep them together.  But it does mean they cannot ever come back apart. 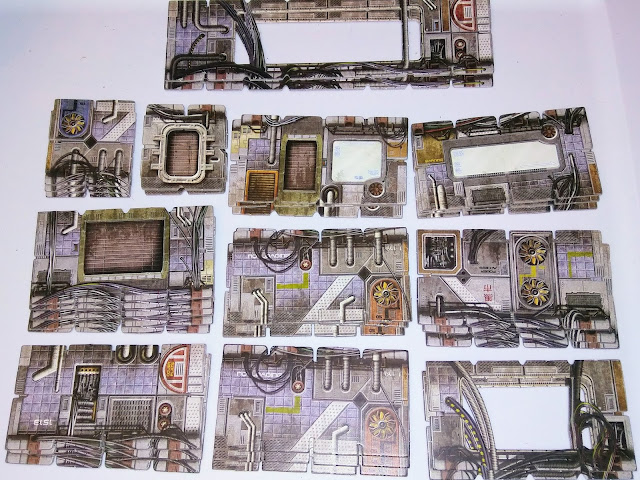 All of the walls or bulkheads if you like.  Unlike the stand alone non Core Space releases there are no ceiling or floor tiles.  You have the mat to put them on for the floors and at least in the rulebook that comes with the game there are no rules for multiple levels anyhow. 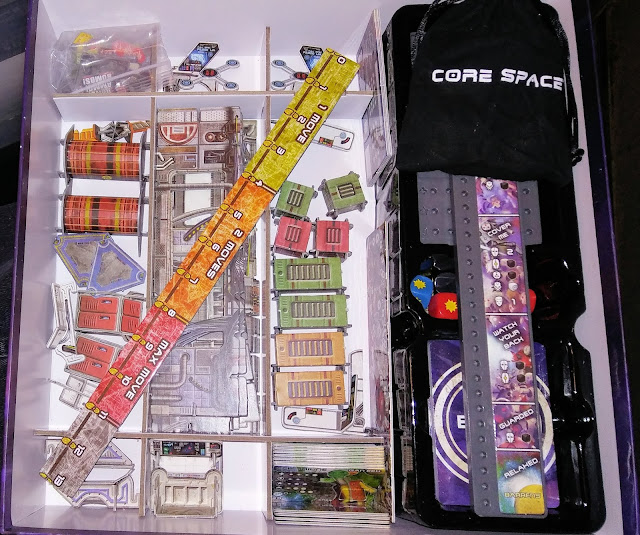 And it all fits excellently in the box with room to grow as I mentioned!  While there isn't a ton of room left over there is some and more if say you leave the mat or the miniatures box out of it.  If you want to waste time with setting up terrain elements you could pack them flat and fit in more but I would prefer to save more time than space.  I already have a plastic storage tub I am using for all of this stuff.

Probably in 2020 early I will cover the rulebook it comes with, the expanded hardback rulebook, and at least one of the expansion sets.  As it is I have a hell of a lot of terrain even if the game wasn't any good which in the one play I got to do I think it is.  (I liked it.) 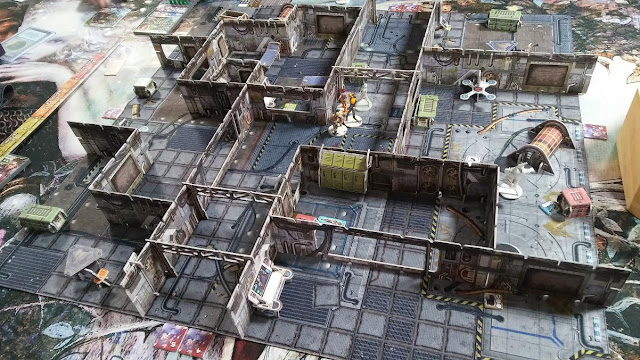 Doesn't this look rad?  Its solo, co op, or competitive and can be modified to be the sci fi minis RPG boardgame most of us always wanted but never had.  (Or could find people to play with.)

Posted by Captain Rufus at Monday, December 30, 2019 No comments: