See back in the dark ages of VHS tapes one of my boxed sets of the early 80s mecha anime ARMORED TROOPER VOTOMS had a promotional mini game printed on postcards to promote the upcoming tabletop RPG that was being made (and no it wasn't HEAVY GEAR although I could understand the confusion..).

I haven't ever heard mention of it and having found it and wanting to scan it for a friend, I present it as scanned by my old enough for the color ink cartridges to be only carried in value packs at actual stores printer: (Click image for full size.) 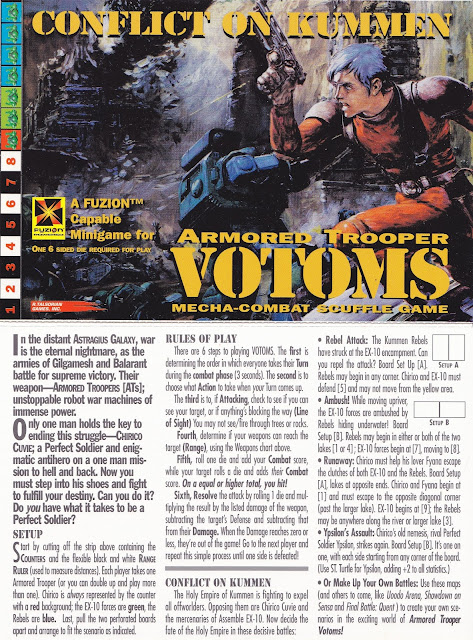 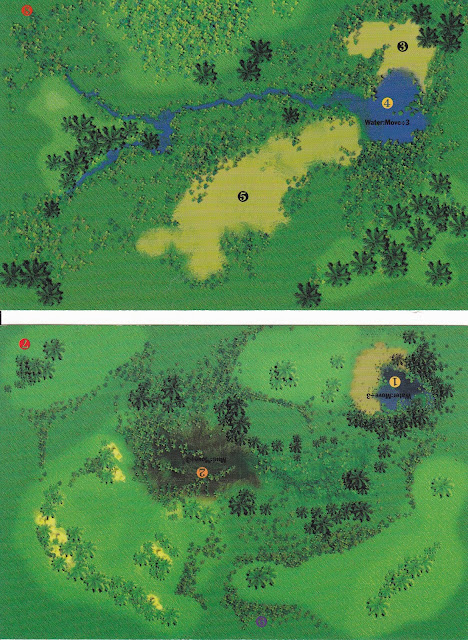 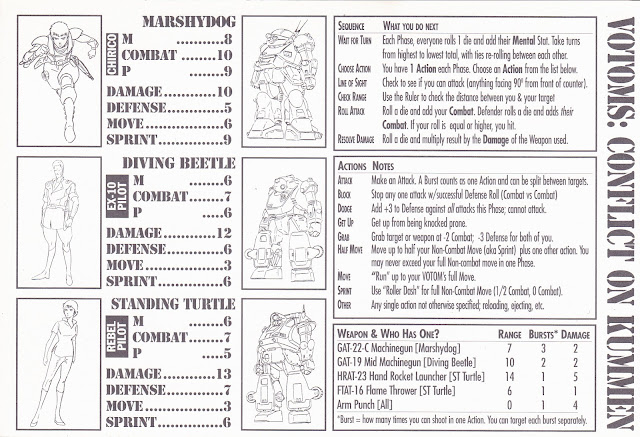 I hope this is of fun and service to folks!
Posted by Captain Rufus at Monday, July 18, 2016 No comments:

Back in the day games were young and controls weren't set in stone.  Many games just didn't have well thought out or even remotely ergonomic control schemes.  And now we have better control devices with more buttons while having gotten used to modern controls and control schemes.

(All praise Thresh for WASD mouse look.  PRAISE HIM!)

Which leads us to our game, Shadowcaster: 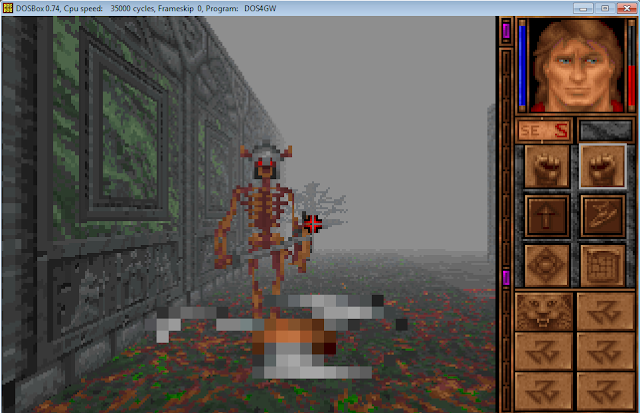 Shadowcaster is an early 90s hybrid of FPS, Adventure Game, and RPG.  Developed by Raven Software with some Id Software engine and coding help it was published by Origin Systems.  (My release is the CD version from the EA Classics line of budget rereleases.) 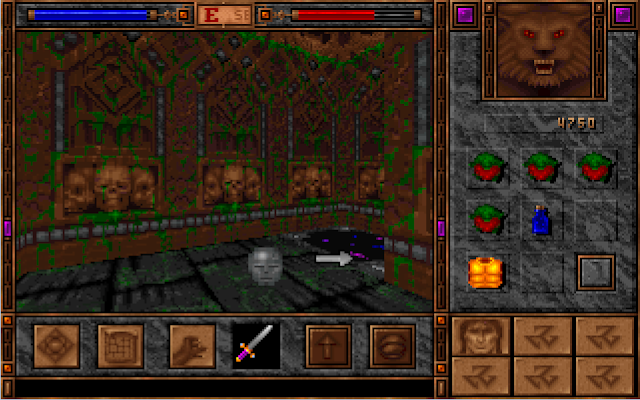 In this game you play a character who can transform into different creature forms, each of which with their own inventory, abilities, and experience levels.  Play is done with a mixture of mouse and keyboard controls which cannot be remapped in any way.  That is played in real time. 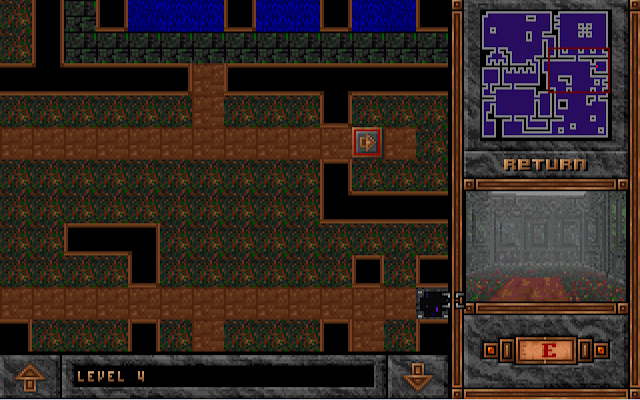 The automap you will be swapping into a lot if you are me.

If you want to follow along, you can see the controls here:  http://replacementdocs.com/download.php?view.802

Now some controls aren't quite explained in the manual but there are a number of keyboard keys as well.  But take a look!  See how the right hand side of your keyboard plus your mouse which for most of us is also right hand controlled.

It.. isn't exactly comfortable to control games like this.  Back in the day many games used the Numeric Keypad or the Arrow Keys for almost everything.  And while some titles could be mostly played with the mouse, in real time games this is nearly unplayable and makes these games much less fun to control, especially when you have spent nearly 20 years used to our modern default PC game control schemes.  And even turn based titles end up being slower, clunkier, and much less fun.

However as a modern gamer playing PC games in DOSBox or other titles in emulators for other platforms or even titles that run natively on our modern machines we have many many options to make our games play much better.

It is time to show you fine folks what I did.

First we need to realize my keyboard, which has the bonus of being plugged into my PC with two USB cables because it is huge makes moving it for the simplest solution of moving the keyboard to the left so I can rest my left hand on the numeric keypad simply isn't happening, not even taking into account the limited desk space I have.  It is nearly 20 inches wide and 7 inches deep.  It takes up a heck of a lot of space!  So the laziest solution just isn't going to work. 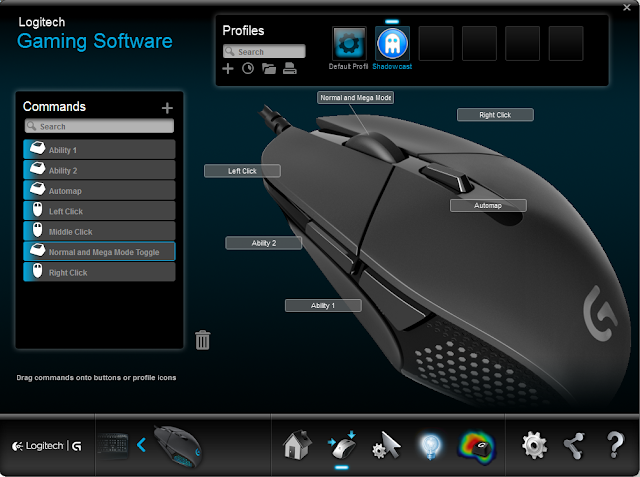 Thankfully my mouse comes with built in software to remap keys.  As the game uses left and right mouse buttons already I leave them alone, thanking Cthulhu that Logitech's software lets me still use some buttons as default for a mouse.  I set the middle button to switching between normal for the age computer mode that shows a bit more of the game interface and info and the better looking large size window.  I am always needing to see the automap so it gets the button normally used for on the fly DPI (Dots Per Inch. Basically how sensitive the mouse is when moved.).  The two thumb buttons are used for the primary and secondary ability actions that would otherwise involve moving and clicking icons on the screen while trying to fight or move.  Now it is done with a single button press!  AWESOME.

I could also do things like messing with DOSbox' keymapper but it is clunky and not exactly useful in the long run.  I am lazy after all! 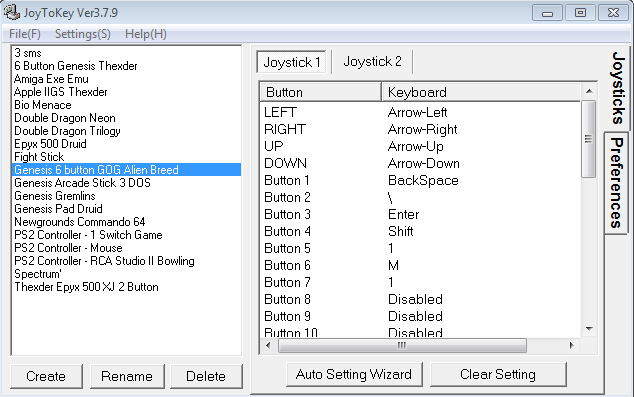 I think about maybe using JoyToKey to turn a joystick into a movement controller, or even taking a modern dual stick control pad and making it both mouse and keyboard, which is something this program can do.  But.. its a bit slow and annoying to set up for that much.

But an idea I had that was mentioned by some folks in IRC that made me realize it was one that had merit involved me buying a USB numeric keypad designed to be an add on to laptop computers or some of our more modern mini keyboards. 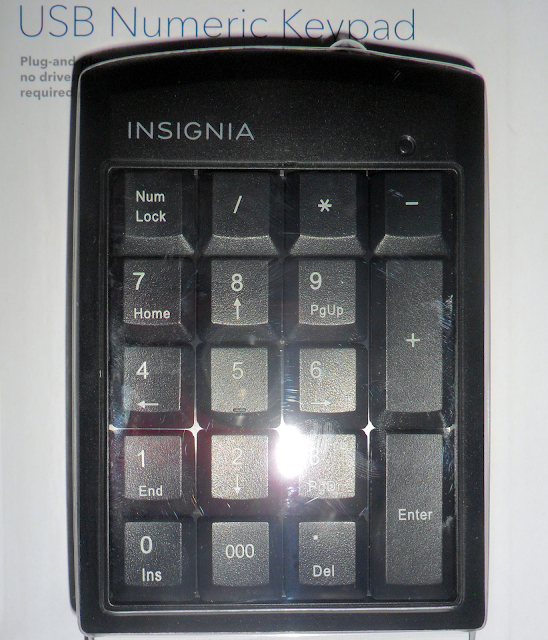 10 bucks at Best Buy got me one.    But if I rest it where my hand naturally wants to be I will practically have my arms stretched out to an absurd amount.  So long term that needs to be done lest I want to angle and move the number pad around or rest it on my leg.

Sadly my 2005 iMac keyboard is only a tiny bit smaller.  Not remotely enough to move or unplug the main keyboard just to play some old games.

But.. I have a Bluetooth keyboard for my Ipad Air.  And look at it!  It is cute and wee!  But I need to get a Bluetooth dongle because my machine doesn't have Bluetooth.

Look at it!  PERFECT!    So now I need a 14 bucks online Bluetooth USB dongle and I will have the best and easiest solution to comfortable game playing for 100s if not 1000s of old games over many platforms!

In emulation on a good modern PC various programs and all our modern devices can make games that were iffy back in the day to play and nearly unplayable today nearly sublime!