Yes I still function.  Kinda.  Ish.  Maybe.  I sadly haven't done a whole lot of gaming this year at all tabletop wise and not a massive amount of buying especially once a 6,000 USD plumbing bill hit me not counting all the time lost to it and what said issue damaged beforehand.

But I have gotten to buy a few things here and there as my finances and brainmeats permit.  And one of those is a couple of cardboard terrain kits from Battle Systems out of the UK.  See a small indie game store opened up in the same small business park community center thing as a place I get my Warhammer 40K things from once in a while.  (They don't step on each other's toes.)  Looking into this new store it sadly is mostly Magic and other CCGs but they did have a huge amount of these terrain kits and its associated game.

I bought one of the cheaper sets, the Engineering Sector and I really enjoyed putting it together.  The kit needed some simple white glue to go together at its best along with sadly the instructions being linked videos on the company Youtube page.  Now this I DO NOT LIKE as I vastly prefer physical instructions that do not depend on the whims of the Internet to assemble a 20 dollar product. (Note on their website this 20 and the main 50 dollar product are listed cheaper but I presume after shipping the price is probably close to equal if not more given the hell of overseas shipping.  Plus this store locally has a buyer program that helps a touch.)

In my view if they cannot understandably afford to print out instructions PDFs or images on their website is vastly superior to having to watch and listen to someone tell you how to assemble it.  While looking at the box front and back helps somewhat a few of these parts are very odd and tricky to assemble. 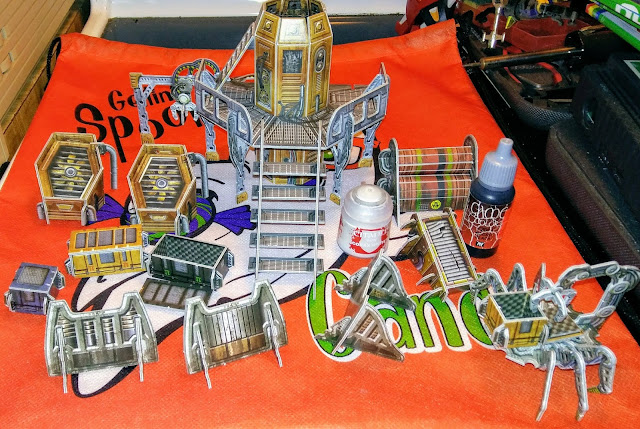 I assembled this initial kit relatively quickly as it was a small set made of quite thick cardboard.  Would have been faster with proper instructions. 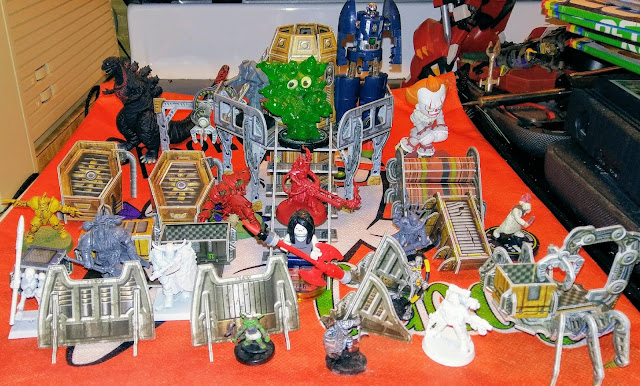 And with a variety of miniatures and toys for scale purposes.

Now much of the above can mostly be put together without glue it is made of cardboard thus it has some give to it and while it is all die cut or half cut in the case of parts intended to bend or fold on itself many parts are going to look MUCH better and be far more stable if glued with said basic white glue.  Some things are not quite as perfectly held together by friction or at the perfect angle otherwise.  However with some thickening agent ala "the wax trick" where some superglue, floor wax, or nail polish is used to tighten the joint you could make it easy to reassemble instead of leaving together saving space.

(And another trick to make it look even better involves colored markers.  Go with black on all the exposed cardboard centers for a cel shaded feel!  The same color for a more realistic feel!  Its your stuff.  Heck, I am sure some enterprising sorts might even figure a way to put some kind of plastic coating over it and make it practically invulnerable!)

For veterans of 90s Necromunda I would say the cardboard is roughly twice the thickness or so from that game and its Gorkamorka Orky sibling.  So its not cheap junk.

Anyhow let us get on to the BIG SET.  (They sell bigger though.  But again money is a thing.  I would be lying if I said I won't ever get them though!) 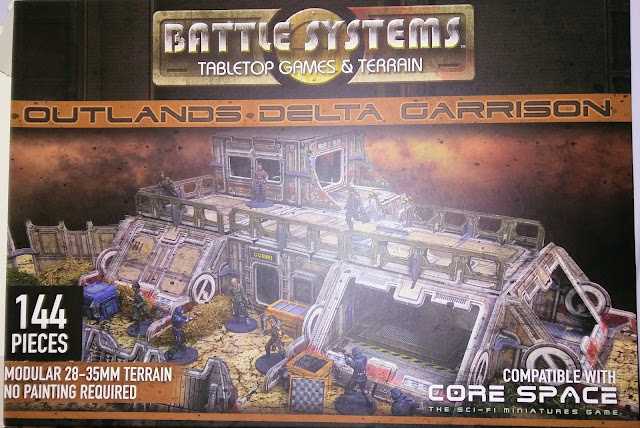 The box front.  You will need it for reference if you do not want to hover over a couple Youtube videos. 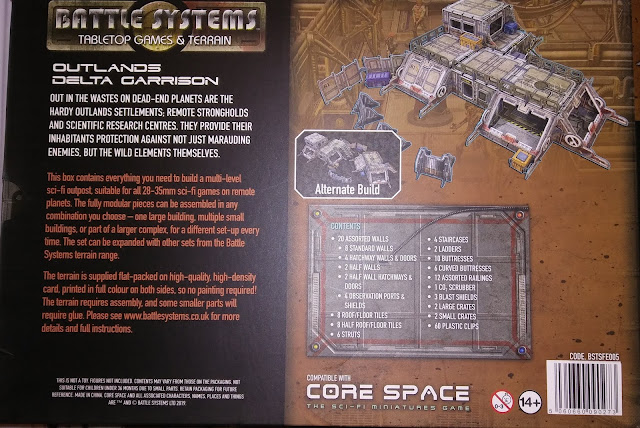 The back.  Also shows another angle of the set plus another way to assemble it since its modular.  Also none of this is going back in the box afterwards.  Some sets like the Engineering one aren't even in a box.  Just a paper and some plastic wrap. 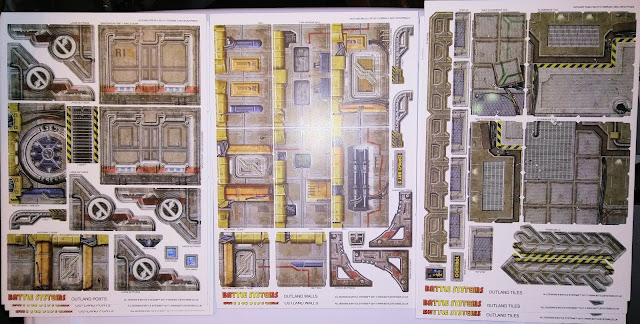 Most of the cards in this set.  3 each of Outland Tiles and Ports.  2 Walls cards. 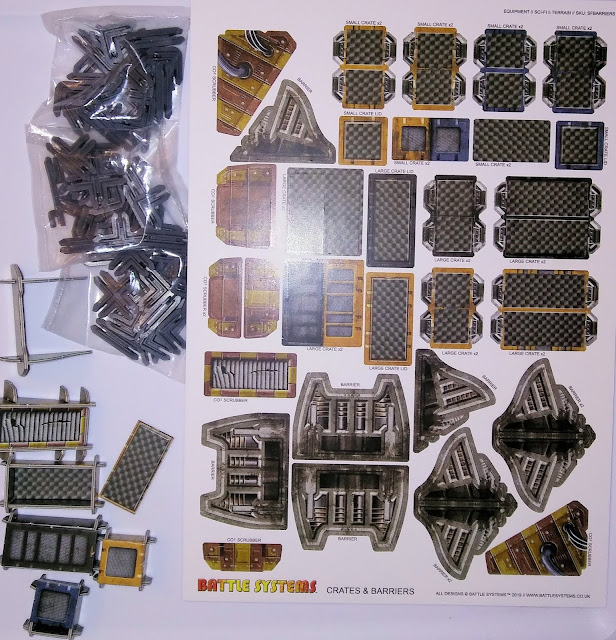 The Crates & Barriers card was in the Engineering set as well.  You can see some assembled examples in the lower left.  This set also includes plastic connectors that they honestly don't quite give you enough of to be flexible in my opinion though you can buy more. 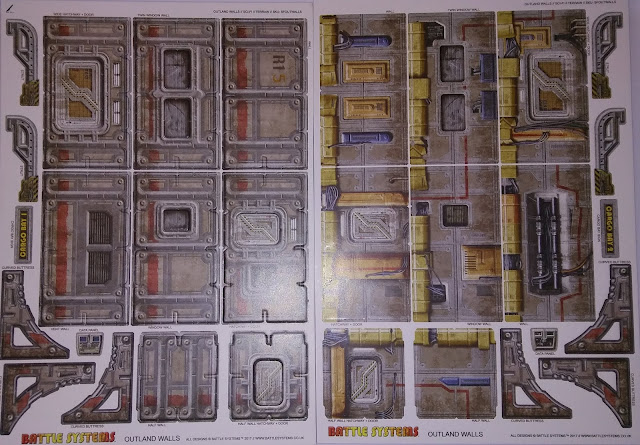 The cards are double sided with one side generally intended to be say the interior walls or double duty as either floor or ceiling tiles.  I really like this flexibility although it means you won't be leaving it 100% assembled and thus it will be a little wobblier and less sharp looking than it might otherwise be if you pick a setup and leave it.  Some bits can be "Blu Tack"ed to be things like room cards above the doors or various little computer type displays.  The doors and windows can be left in or taken out.  The cardboard is thick enough that you can generally put them back in but I would say you might wish to use the joint tricks I mentioned above for these purposes long term.

For the glue I recommend a tiny tab into the female part of a join then slide it in.  Wipe off most of the excess or use a toothpick or whatnot to fill in any gaps that might appear.  Being this sort of glue gives you time to wiggle it into a proper position too. 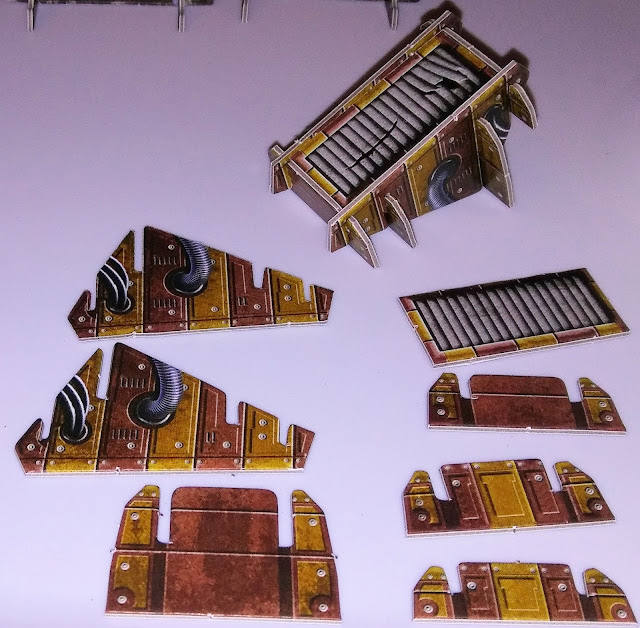 Yes all these bits form that one little vent.  I used glue on it and this one meaning I cannot easily switch between damaged and undamaged vents.  But it is more stable and means less I can misplace.  It is your call!

The crates I choose to assemble in an open or closed manner.  There is a little piece you glue to the lid that helps it stay shut and flush with a little glue on the egg crate part! 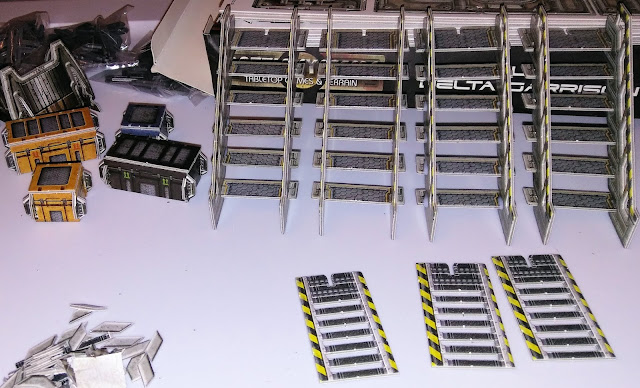 The stairs are kind of wobbly and all but demand glue for long term use.  You will need to wiggle and jiggle and move the steps into proper position where the die cuts aren't perfect.  (You know, some will be deeper or wider or shorter than they should be.)  If you really want to get classy they recommend 2 colors of magic marker to get the hazard stripes on the unprinted center of the cardboard.  I don't know if I am quite that nutters but I appreciate their commitment to (Twilight) Sparkle Motion... 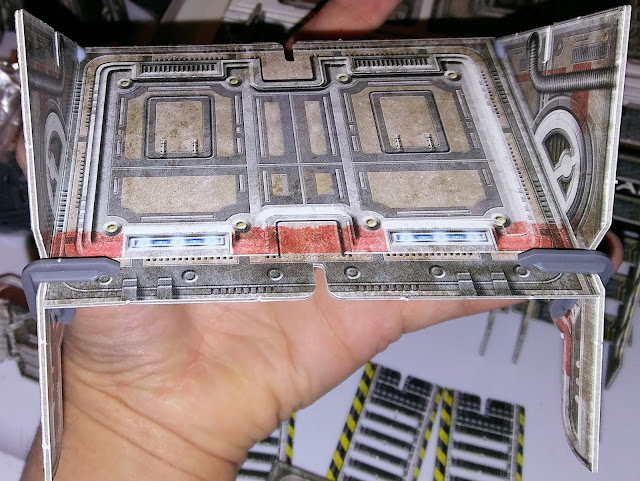 And now we come to the building part itself.  You need to put in some L shaped plastic connectors at an angle to build it.  I used some glue up at the top to make it more stable as it doesn't particularly go together any other way but this.  Like other parts the plastic connectors do need some adjustment to be properly aligned.  You can also slide other parts on top of them or rest up against them as you will see later on. These bulkhead shutters can be in or out just like the doors and windows.  With a little nudging and or glue/thickener they can even be raised.  Long term maybe a tiny bit of magnetization or velcro connecting the parts in an inconspicuous place would be great. 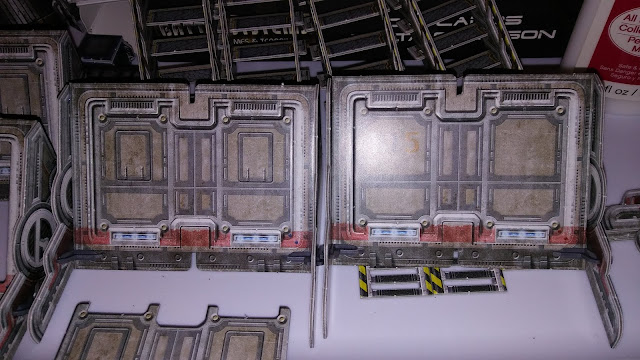 There are 2 different shutter types as my flash is trying to hide. A little detail of an interior section with door and a closeup of a few other connectors.  Note the central divot there.  I will mention that next image. 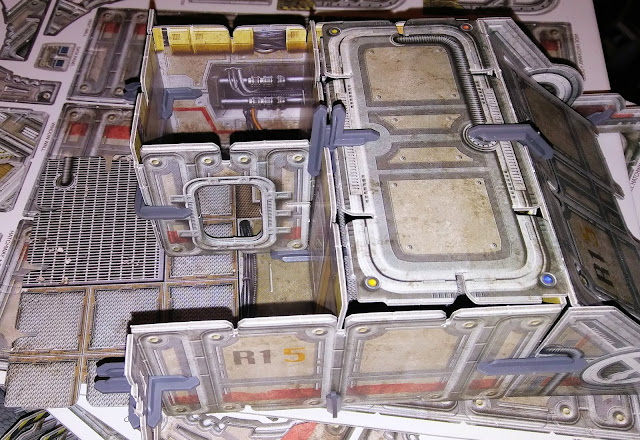 I do a little tweaking and install a small room.  Some of the walls demand to be assembled a certain way vertically as they do not have a connection slide point and merely a divot that can slide over the connectors. 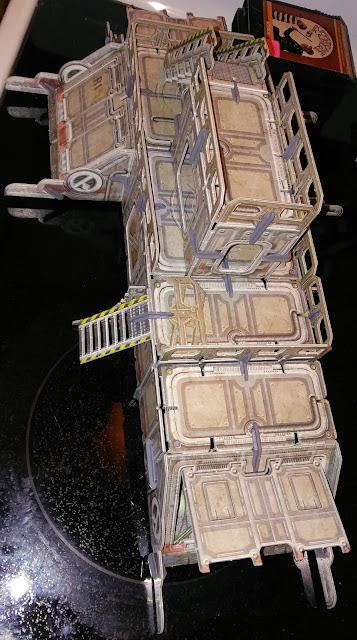 I spend a while and play with things and build this big outpost type building. 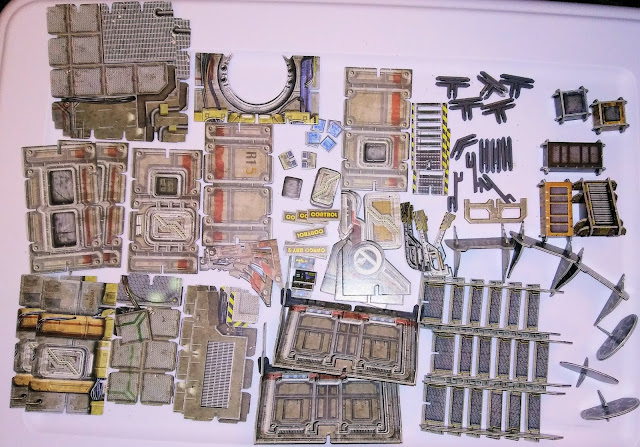 My EFF THE BOX I BUILD WHAT I WANT leftovers. 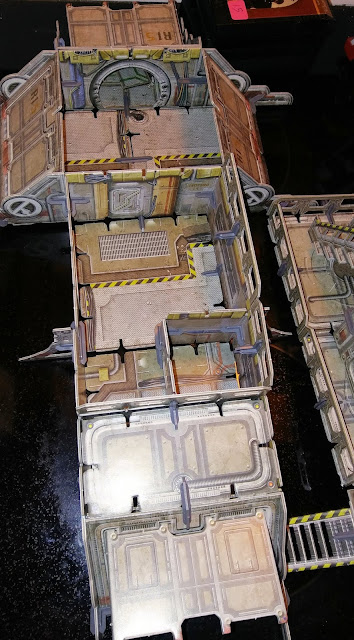 The inside of the building.  I smooshed it together a little bit better from this image.  The top comes off easily and the bottom stays on as well.  If I was willing to save connectors I could have had the bottom not directly connected to the rest of the structure.  I left the small front room sealed but it can be accessed from the front anyhow.

An idea of what it looks like inside with some miniatures for scale. 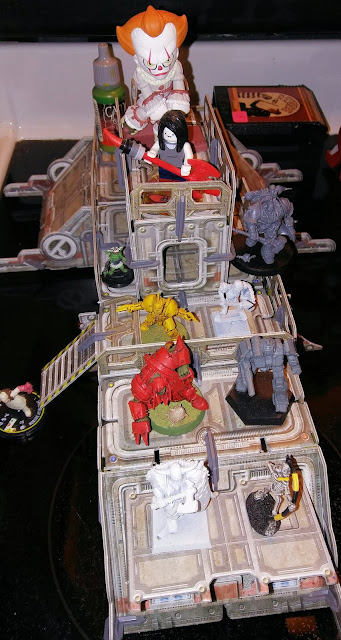 Scale on top.  Also shows that the front shutter can hold a few models while up just with friction.  Yeah my little 2nd floor walkways are not exactly current GW figure sized.  Oh well.  I would say in general it is best for 15-25mm truescale models though other scaled figures could be used without too much effort albeit with some things looking too small.  With some of the other sets obviously the chairs and tables and other such goodies they come with are not exactly gonna work for your Godzilla or Battletech games and won't be your Primaris Marine's favorite lounger.  The two sets I cover you can easily get away with using it for just about any sort of Sci Fi or Near Future type game and scale thankfully. 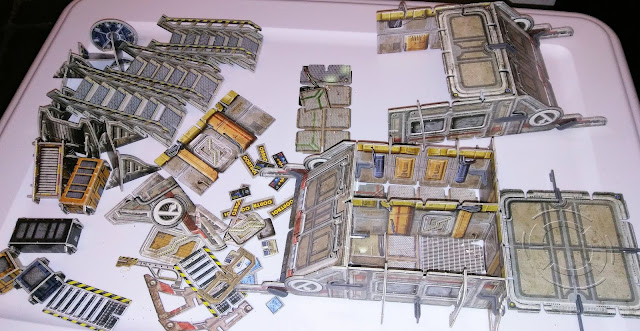 The extras.  I made a small 2 room building and half of another.  The interior wall is merely resting with friction and up against one of the connection pieces.  Some weird connection parts I used to make the roof of that building quickly and easily removable.  The rest of the stuff can either be glued on later where I want things like computer screens and all.  Or is general parts like ladders and crates.  Or maybe I will rip it up and build something closer to the box cover?  Or get more connection pieces and get creative?  Who knows?

So overall what do I think?  If it was a little cheaper in price and came with some form of physical instruction or a downloadable one as opposed to watching some dude in a Youtube video it would be Good.  But those little annoyances mean I can merely give it an OK. I like it and its very fun to build but those little annoyances keep it from being as good as it could be.

Posted by Captain Rufus at Friday, October 11, 2019 No comments: