It has been a bit but my Star Wars gaming collection continues!  Where it was intended to be the X Wing Miniatures game given the utter insult of 2nd edition and their blatant money grab hose job removed all desire I have to play that game or anything else FFG makes.

So instead I will cover the electronic games of the Warsing and the Starsing! 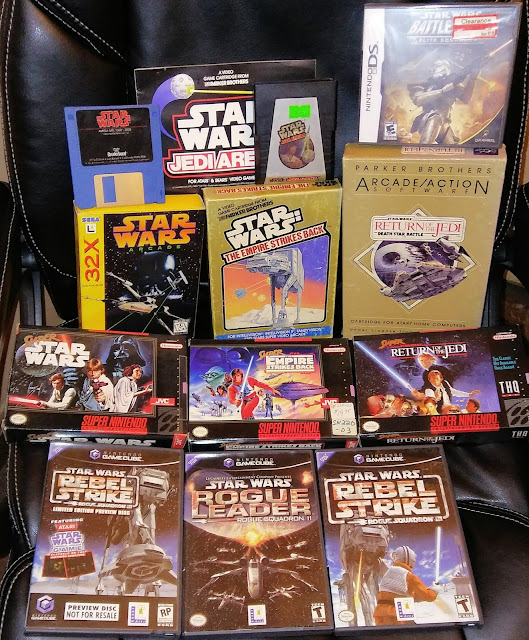 Most of the Nintendo and really older console/microcomputer titles.  Sadly I couldn't find my silly fun little Amiga sound chip that came in the Star Wars box.  It played a tiny snippet of the Star Wars theme.  I actually preordered Rebel Strike just for the bonus disk even though it and the other two Atari arcade SW games are on the main title disk.  Sadly they don't control the best as getting the old arcade flight yoke controls working in any form of home system has been really iffy.    Lots of these games do have a theme.  BEING TOO DAMNED HARD.  Rogue Leader, the 32x SW Arcade (there are like multiple SW arcade games.  Atari and two Sega at least.), and most of the Super NES titles are all brutally tough. 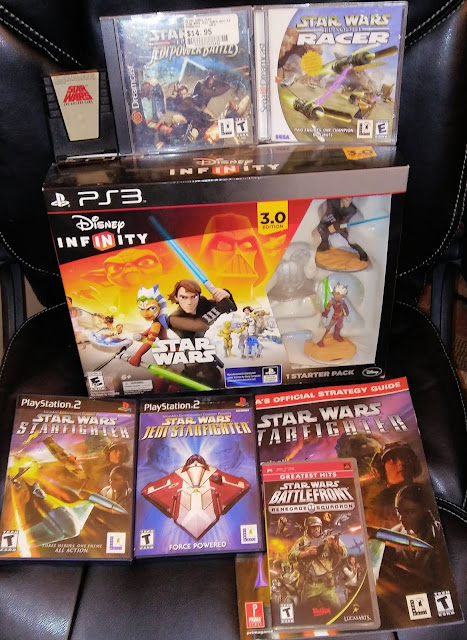 The first of the Atari 800 SW Atari Arcade ports that was done fully sprite type based where the later Domark ones ala the Amiga title above attempted vector styled looks.  But had numerous inaccuracies in them.  The Starfighter game is why I bought a Playstation 2.  Both of them are great and that PSP Battlefront game had a good solo campaign for what it was. 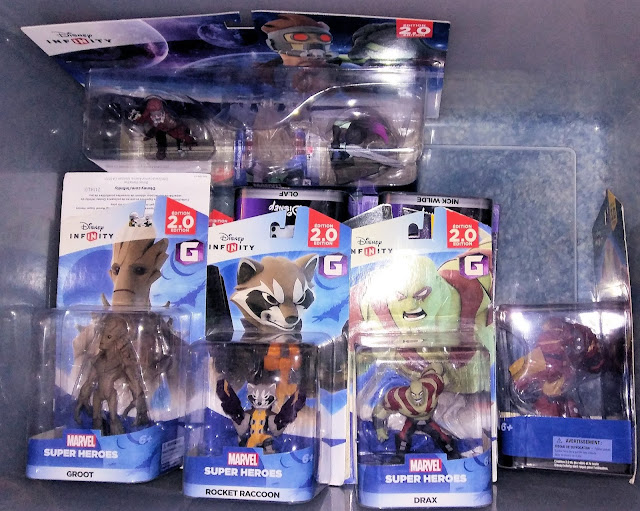 The non SW Disney Infinity figures I have.  Hidden completely there are Nick Fury, Elsa from Frozen, and Donald Duck.  Plus Judy Hopps.  I have never actually played Infinity outside a little bit on the PC port without the nifty base to bring your dudes into the game easily. 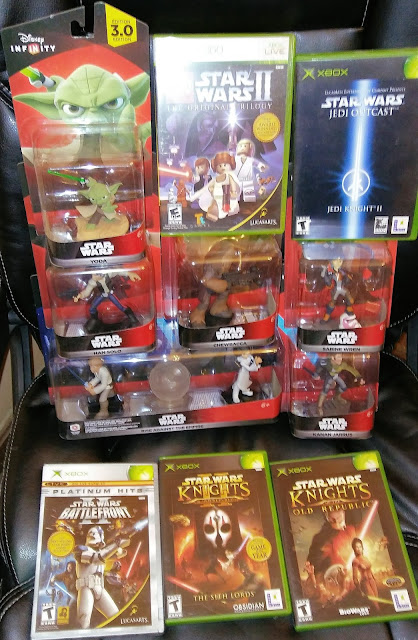 The Xbox/360 titles I own and the actual SW Infinity figures.  Most of my Infinity stuff was bought at a super cheap price and mostly just because I wanted little cool statues that looked neat.  The two KOTOR games are amazing and possibly my favorite RPGs of that era.  Jedi Outcast might be the weakest of the SW FPS games though. 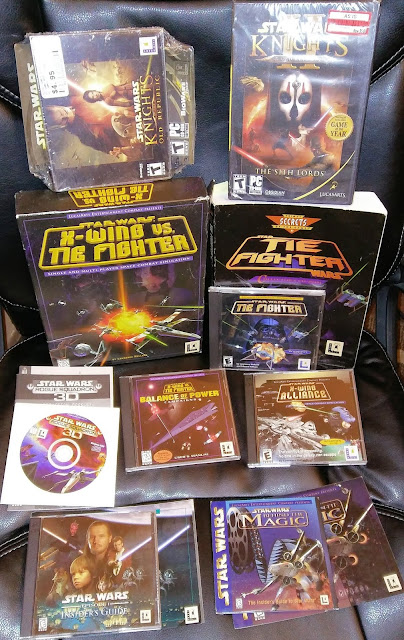 Where the real magic begins, the computer games including the beloved but stupidly unfairly difficult X Wing combat sim series.  The bottom two things are kinda just multimedia bits nobody would really need these days thanks to Wookiepedia and Youtube.  At the time it was lots of cool info and even the cut scenes from the original Star Wars involving Biggs and stuff. 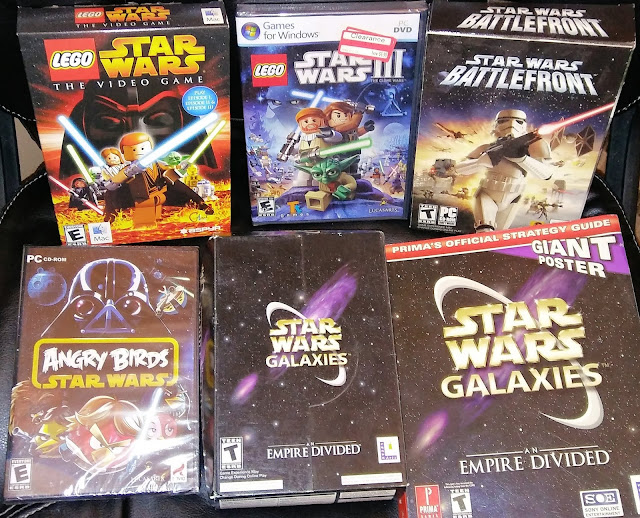 More Lego Star Wars because I seemingly have most of that series.  And the infamous mistake that was the Star Wars Galaxies MMORPG.  I did play some recently on a fan server and it was a good bit of fun honestly.  But the people I was playing with more or less left super quick again even though it was free. 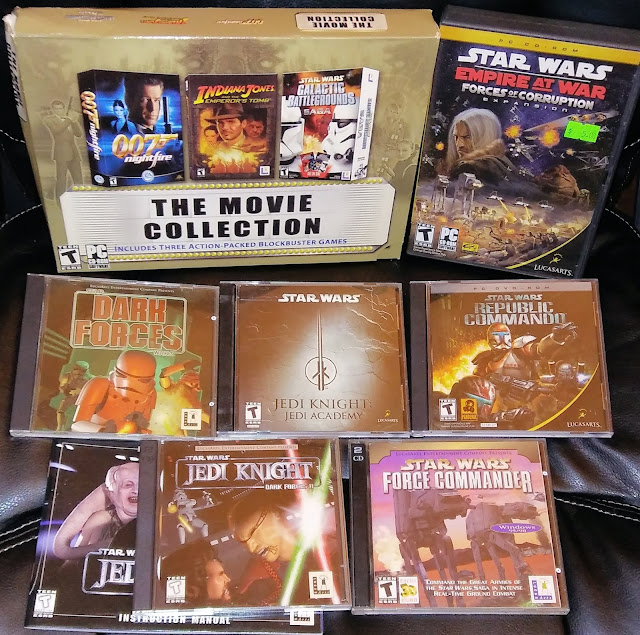 And the FPS and RTS section.  If you want to laugh I bought that Empire at War expansion thinking I owned the main game but apparently I do not and merely had Force Commander.  Searching for the main title I could swear I had caused me to clean the hell out of my kitchen/dining/computer room and still not find it.  A search of my upload images on new game pickups also failed to show the original so either I am losing my mind or I just misplaced it in a hell of a silly spot.  Some of these games do require fan patches to work on modern systems.  Is it worth it?  Well for Republic Commando it kind of is.  And Galactic Battlegrounds is more or less Age of Empires II which is a fantastic game.

Yeah not the most exciting of collection posts but its Star Wars games I can play which is good because I can't get people to play Star Wars RPGs, especially not the good one.  (D6)
Posted by Captain Rufus at Friday, September 28, 2018 No comments: