Yes!  Smaller Systems!  These are machines that didn't make a big splash, I don't have much of, or only have the games because they are in one of my "Theme Collections" like Batman, Alien v Predator franchise, ect.  Or just titles I found super cheap.  See unlike many people I am totally cool with emulation but vastly prefer to own legitimate copies of my games.

Click for big if it gets your bytes megaed. 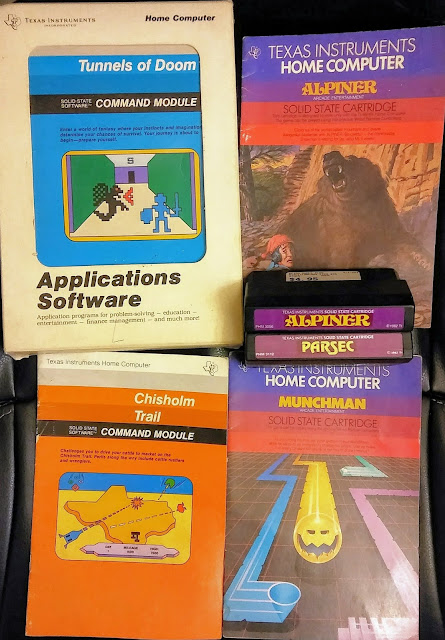 Starting with the TI 99 computer here.  Not a whole lot honestly.  Its a system I might get some day if I can get it cheap enough.

Demon Attack (One of the best looking versions of this venerable classic.)
Car Wars (Because of the name even though it isn't the tabletop title.  Though Steve Jackson Games did some deal with TI to use the name.)
Microsurgeon (The definitive version of this classic probably.) 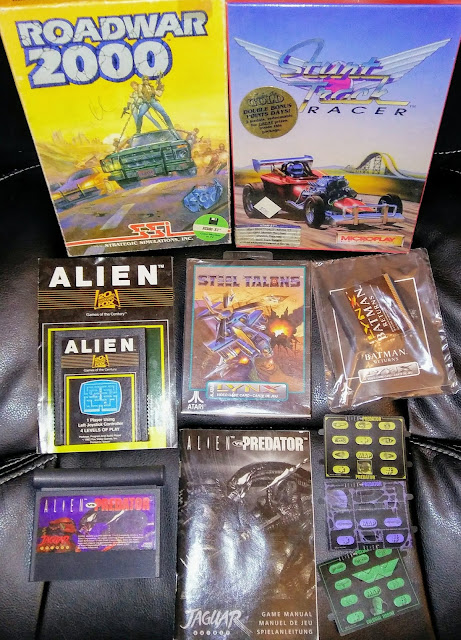 A 2600 game I forgot about, and some Atari ST, Lynx, and Jaguar.  Given that the ST shares many games with both the Amiga, DOS PCs, Atari 800, and Commodore 64 I won't bother putting it in the Hunt.  And honestly the Jaguar is almost the same but its mostly just PC or Amiga titles since outside of Atari Karts nearly every other game worth a damn was a port anyhow outside of the Iron Soldier series and some of the modern homebrew stuff that require the infamous CDROM drive or are absurdly priced cartridges.  And even the Lynx is mostly ports of arcade games and a handful of exclusives.  So yeah.  No real hunt for most of Atari's Tramiel era machines. 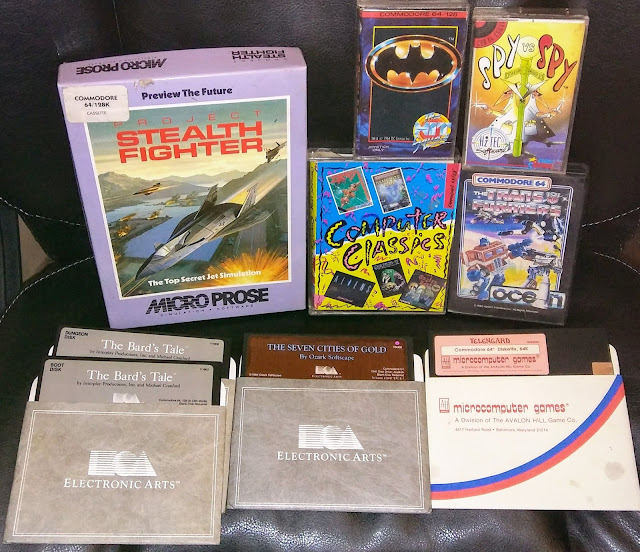 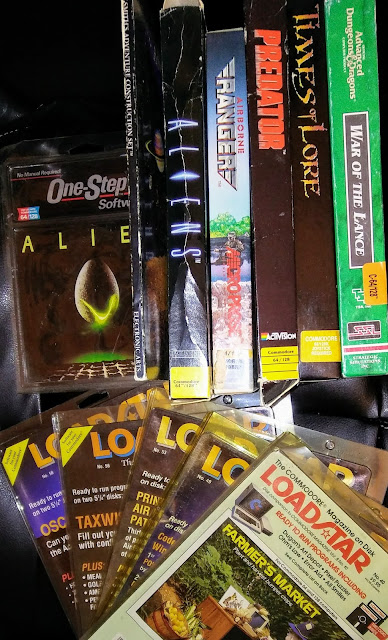 The Commodore 64, aka THE MACHINE OF MY YOUTH.  A great platform. 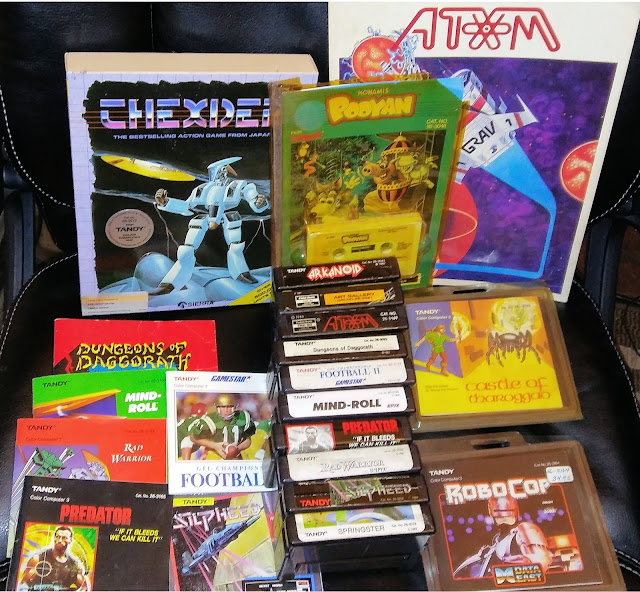 A system I have a fair collection for but still don't have the machine yet, the Tandy Color Computer family!

Downland  (A nifty Coco 1-2 only game in the old school platform explorer style.)
Gates of Delirium (An Ultima 3 clone.)
Poltergeist (Its based on that old horror classic.  Seriously.  I never knew such madness existed!) 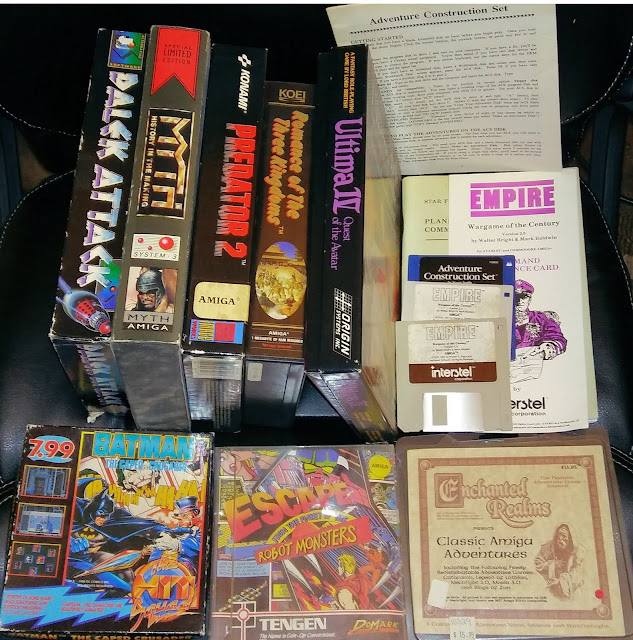 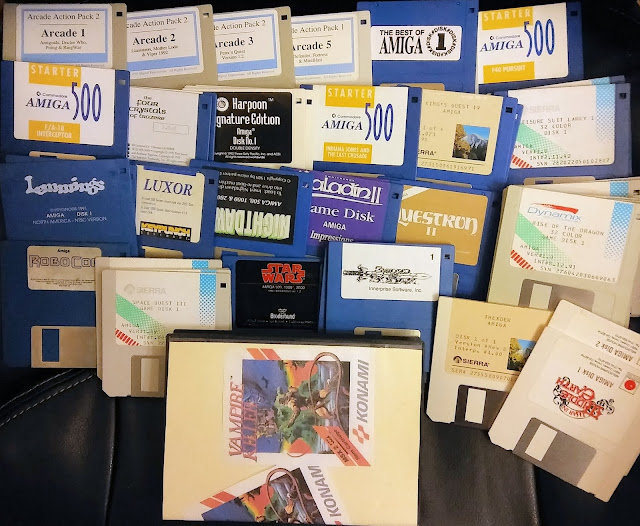 My meager Amiga collection and my one and only MSX title.  Many Amiga drives and disks are varying levels of dead or dying.  And the MSX is an absurdly expensive system to collect for to the point NOBODY SHOULD BOTHER.

Apidya (Its a pretty great SHMUP where you are a bug.)
Black Crypt (A US made Dungeon Master styled RPG.)
Agony (Its a SHMUP.  You are an owl.)
Shadow of the Beast III (The final game in the series and exclusive to the Amiga.)

MSX Hunt if Money Falls from the Sky

The Goonies (A really fun exploration platformer.)
Thexder II Firehawk  (The best version of this game.)
Aliens (A unique to this platform Alien game.  Its also kind of suck.)

All these poor systems I don't have systems or a fully working system in the Amiga's case yet plenty of games I can TOTALLY PLAY IN AN EMULATOR ITS OK RIGHT?

Otherwise I would have to delete the emulator image file within 24 hours!  :v
Posted by Captain Rufus at Wednesday, July 11, 2018 No comments:

Bringing back the classic scenarios within Warhammer 40K Rogue Trader, First Book of the Astronomican, and White Dwarf from the late 80s?  YES!

You see I have always wanted to do something with some of these old scenarios but never really figured anyone would really care since most 40K players just want to do standard "Bring and Battle" games and very little else.

But a friend who doesn't want to buy into the game but is somewhat interested and has another friend who is more interested has asked me to teach them how to play.  And I have multiple armies for the game plus 8th edition is actually pretty decent!  Sadly time to schedule a game is tough but this gives me the opportunity to prepare a good set of tutorials.  And what better way than using all these old scenarios, but twisted for the armies I have and the current ruleset? I choose to start with.. the START.  The original Rogue Trader tutorial scenario, Battle at the Farm.  While it uses Space Marines versus Orks as they were in 1987, I am going to go with Alaitoc Eldar versus Necrons as those are the two forces I am focusing on in this edition for now. 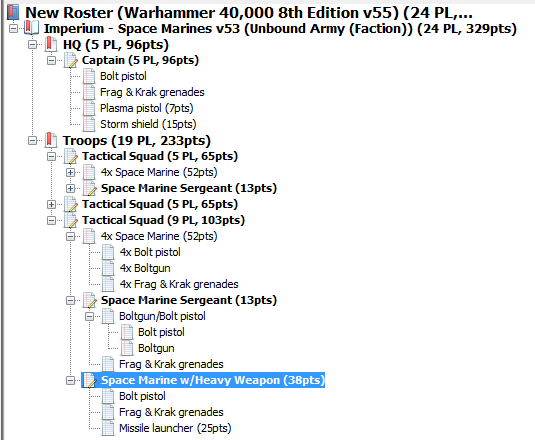 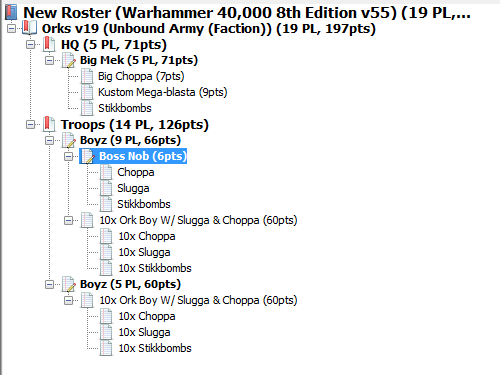 I take Battlescribe and try to roughly build the forces in the current edition. 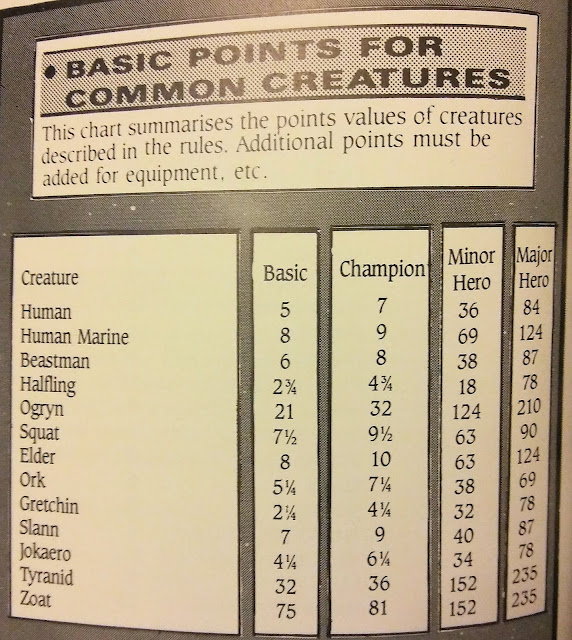 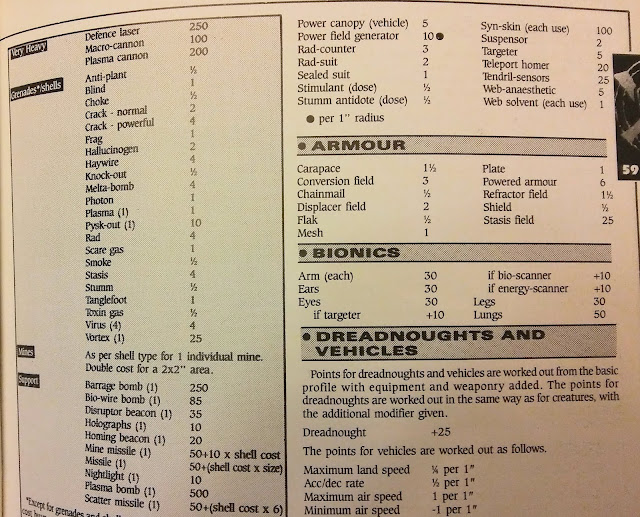 I also give a check as it would be in said edition and like the current one the Marines were way better points wise in spite of having the superior position. 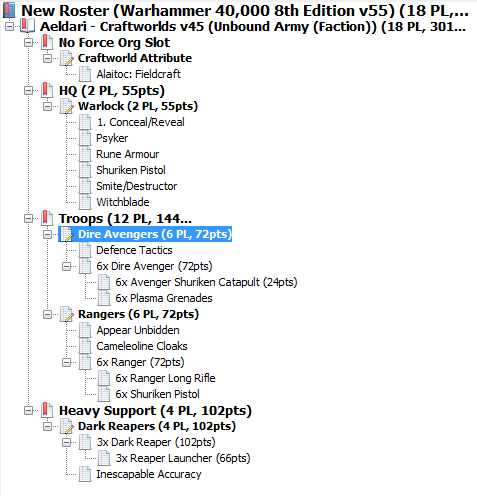 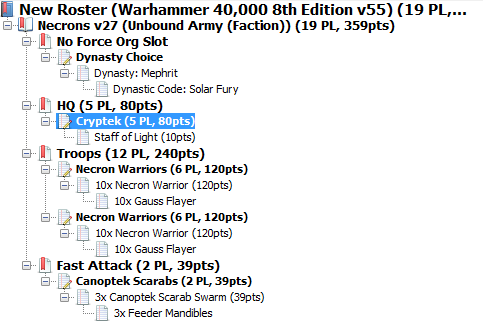 I build forces to be much closer and decide the Eldar to be taking the place of the Marines,  I give them less points but not an extreme amount less while trying to roughly keep the model and rules count relatively simple for a tutorial mission.  16 Eldar models versus 24 Necrons.  No vehicles will be used for this mission, nor will Command Points or Warlord Traits or other things like that.  (More info when I do the actual write up of the scenario.)  If I had a proper low point cost Eldar HQ that wasn't a Psyker I would probably use them too but I don't.

My core concept will be the Eldar start inside the ruined farm structure and are required to hold it for three turns before needing to retreat (unless they manage to kill the attackers) and at least get the Warlock off the table.  The Necrons will be somewhat doing what the Orks did in the original and the Cryptek is out to collect an ancient artifact within the structure meaning the Necron player will have to protect the Cryptek yet get within the structure by the 5th turn as past that the Overlord will demand the Cryptek's unit to rejoin the fight to push the Eldar off the planet before they can bring more forces to bear.

To make things more interesting the first 3 turns will be considered to be at night with a 12" range maximum for all shooting, and increasing by 12 at the start of each battle round.  This means the better firepower of the Eldar get nerfed a little though they still benefit from most of the available cover on the table.  (Also the Eldar will be considered to have won setup role so can deploy first and have first turn, or force the Necrons to setup first and then the Eldar go second.)   These little things ought to keep the Eldar and Necrons from just trying to kill each other and actually enforce their core objectives.  Survive and escape with the Eldar, occupy the central terrain for the Necrons.

As the original scenario writers didn't seem to make a proper set of measurements for the battlefield this gives me leeway to make it any way I want with my available resources. 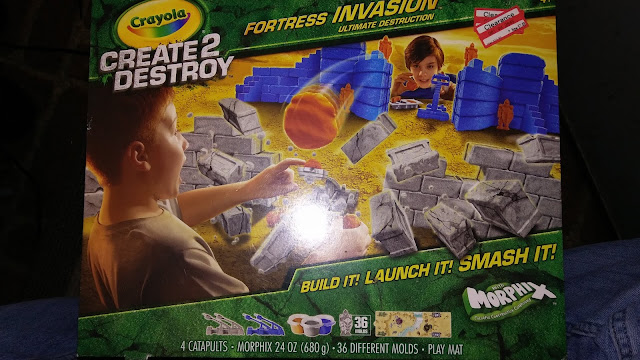 As I have had this thing I got on clearance a few years back sitting around, I decide to see if I can make a ruined farm house out of it.  At worst it was only 7 dollars USD or so.  No loss if it fails right? 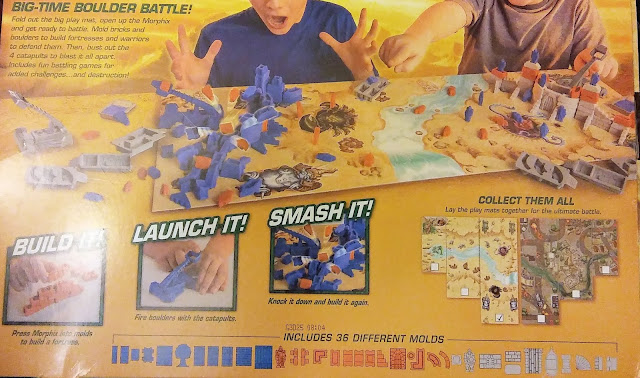 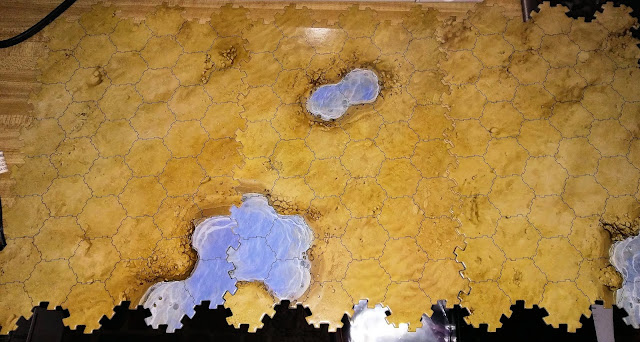 I also had a second copy of the Magic Planeswalkers NOT HEROSCAPE game I got for 5 dollars just for parts which will make an excellent desert board for us to use.  The water is handy as it is perhaps a desert oasis this farm once stood upon until the Necrons awoke and destroyed it.  This is half of my board sections from the box and if I choose to borrow parts from both of the core sets I have to play the actual Magic NOT HEROSCAPE game with I can connect them and make it bigger. 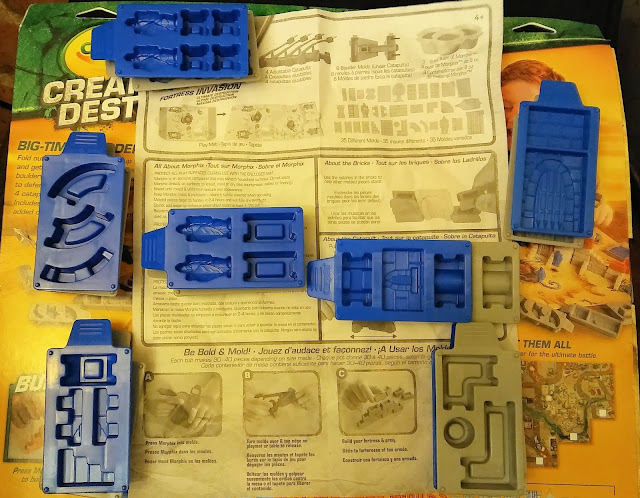 Some of the molds in the Crayola thing. 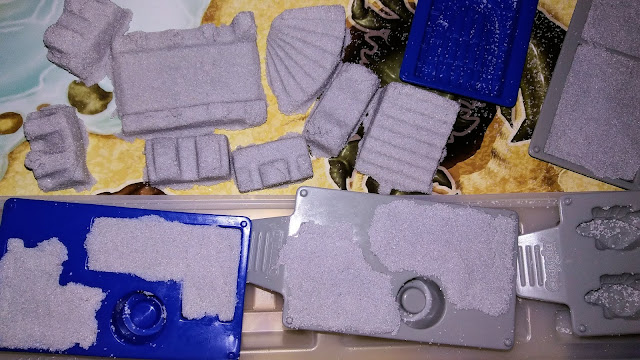 I do some tests with the grey tub of Morphix.  Its semi sticky sand like material that if left to dry still maintains some graininess and flexibility.  Getting the stuff out of the molds is a bit of a pain! 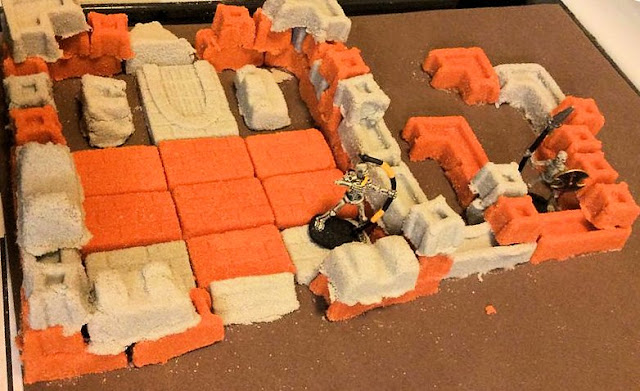 I get a piece of brown foam I glue some printer cardstock to and build a little farm and walls.  Normal white glue and glue stick seems to work though using all of the two more earthy colors doesn't give me a ton of pieces to work with.  And it doesn't exactly look like even a ruined building, does it?  Some folks online say some green stuff to putty things in should make it nice but.. I don't know.  Also I don't actually have proper green stuff epoxy, only repeatedly watered down liquid. 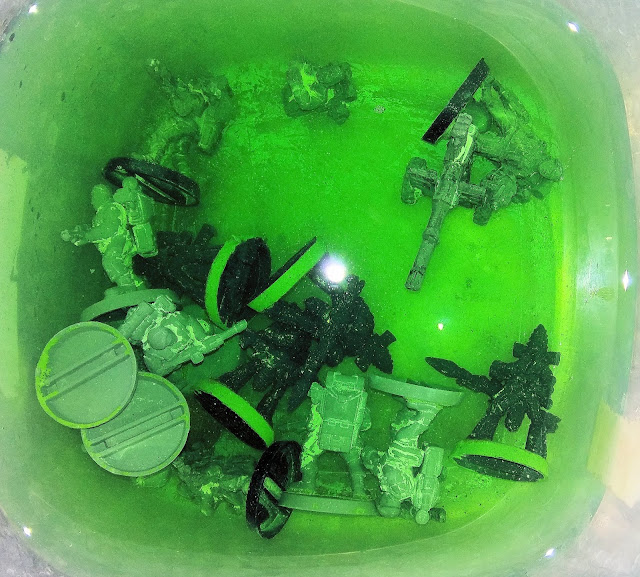 While I worked on the above I did some Simple Green paint stripping of my Eldar Dark Reapers who needed it badly.  Ideally I will have the forces used in the first 2-3 scenarios all fully painted to a fair standard if possible.  And the primer I used on these Reapers came out terrible. 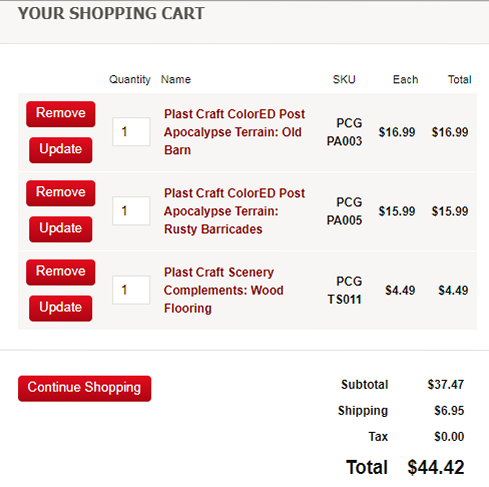 Being unhappy with the Farm above I look into reasonably priced terrain kits.  Plast Craft ColorED seems to be the best choice for price and performance though many reviews online complain of only one side being printed.  Meaning that to make the Barn a nice farmhouse I need to chop up that flooring bit and do some painting and cutting. 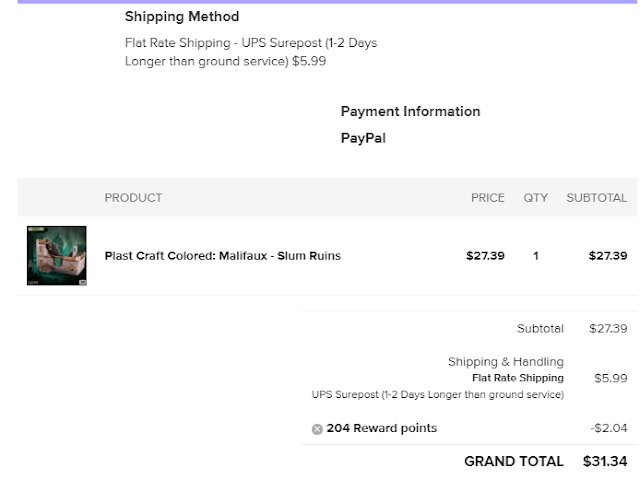 A different store had different bits available.  And this ruin kit looks PERFECT.  A blasted out multilevel building will make for a great wrecked farmhouse and could provide for many future games to be played with it.  And at best I can just give a quick wash or spraypaint to the interior walls and it will serve nicely!  I still need some fences appropriate for the weathered desert and maybe a hill but I have at least 2 more weeks to prepare if not more so can support my local game stores and see what they have to offer in those regards.

So this is where I currently stand.  I have my centerpiece terrain on it's way here, all the miniatures built and their army lists printed up, and a basic outline of my scenario conversion in my head when I get time to write it up and print it out.

Heck, I even have the forces and basic concept of the next scenario in the pile set to go: 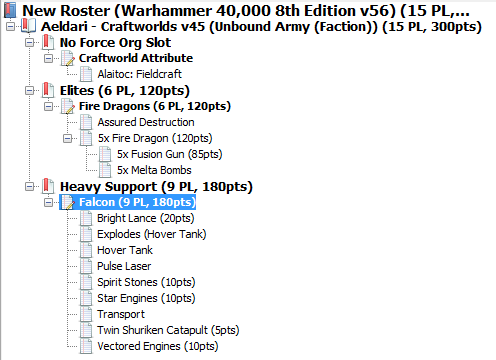 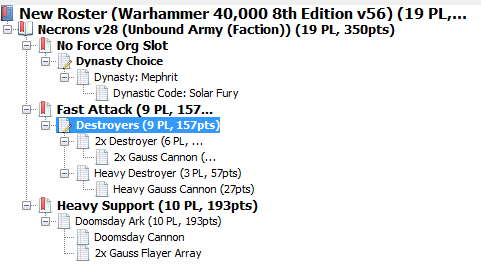 Hmm seems like the next one involves vehicles including transport rules...

Let's see if this goes anywhere!