EDITED ON 9 JULY TO ADD IN COLECOVISION.  BECAUSE I FORGOT.

Yes it has been a while since my last post nobody really cared about.  But I am busy and yall get what you pay for.  (Nothing.)  But I am still collecting here and there when I find things and they are cheap.  Or I am just bored and drive 30-60 minutes each direction to a retrogame shop for the hell of it or because it is damn hot outside and my car has AC.  (I may have working ACs in my house but pulling them out, putting them in a window that fits, sealing them, and then finding a plug it can sit in and not cause a fuse to blow is too much work.  And I save on my electric bill while building character.

But one thing I am finding out is my old way of listing my owned games and showing off my collection is both inefficient and a pain in the ass.  If I try to just show the spines of my boxed titles and the titles on cartridges that are nice enough to list what is on them I can fit a TON more in a smaller image.  Then throw the images on my Android phone not being used as a phone in a gallery titled COLLECTION PHOTOS and I have a handy mostly easy to use reference of what idiotic nonsense I don't really have the time, money, or space for.  So I don't rebuy games but don't miss one in wondering if I already own it.  Or have to carry around print out checklists or the like.

So I share with all of you my images of my dorky buys and get to see what I have, reorganize them to not be some near unfindable mess, clean em up where needed, and make my collection of silliness more user friendly.

(And then uhh... want to buy MORE OF IT thanks to these things.  Yay.  On the upside I am very good about bills and stuff.  I don't really have any debts to speak of and am a cheap SOB.)

HOW THIS IS GONNA GO DOWN
I am going to show the images of my collection and then talk a little about 3-5 games I am sort of hunting for the platform in question.  Simple eh?  They are certainly not the only games I want but some of them.

Let us start with the first major game console anybody cared about and my first, the Atari 2600:

(As always click the image for larger, and don't complain about my mediocre photography.) 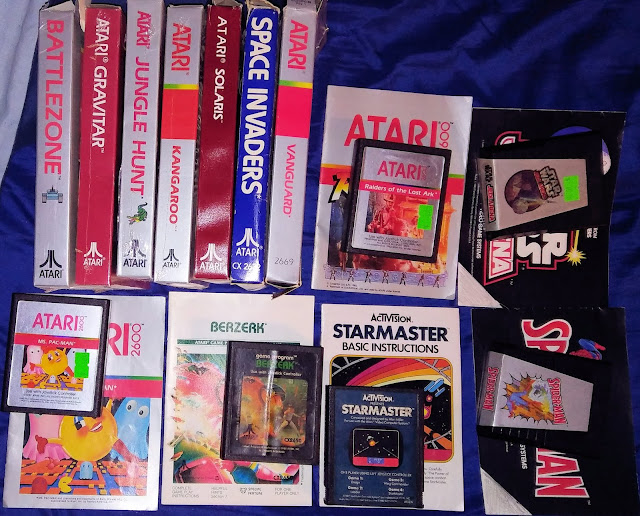 My boxed titles and my titles with manuals. 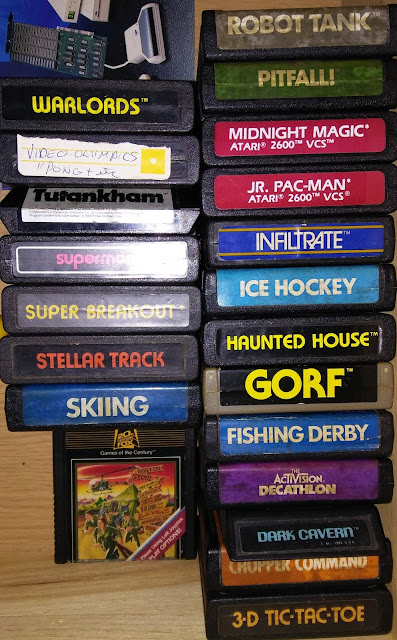 My loose carts, most of which I got back in the day from eBay with whatever machine I got.  (The Atari 7800.) 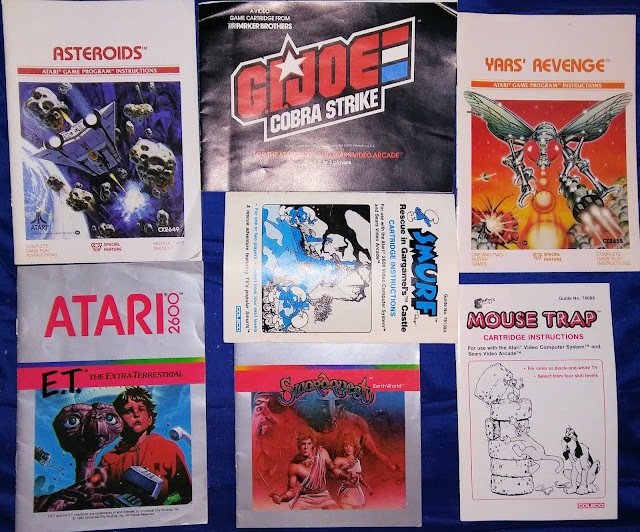 Manuals I have come across for games I do not even own yet but manuals are kind of hard to come by as many kids and even adults never kept good care of their games.  And especially in the Pre Crash era you almost were required to have the damned things just to figure out how to play the damn things! 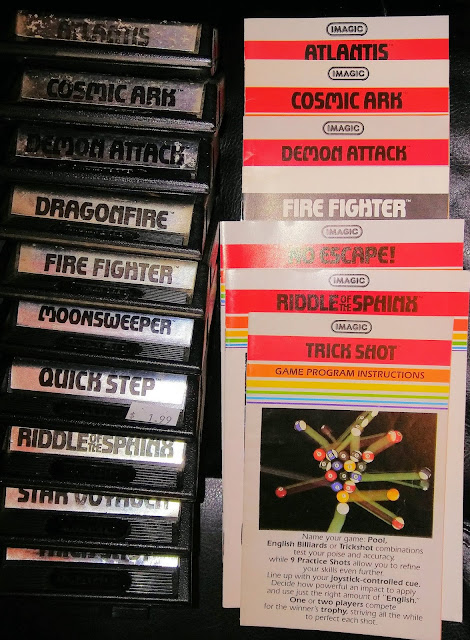 And a sub theme I collect, Imagic.  Games I have loose, and the manuals next to them. 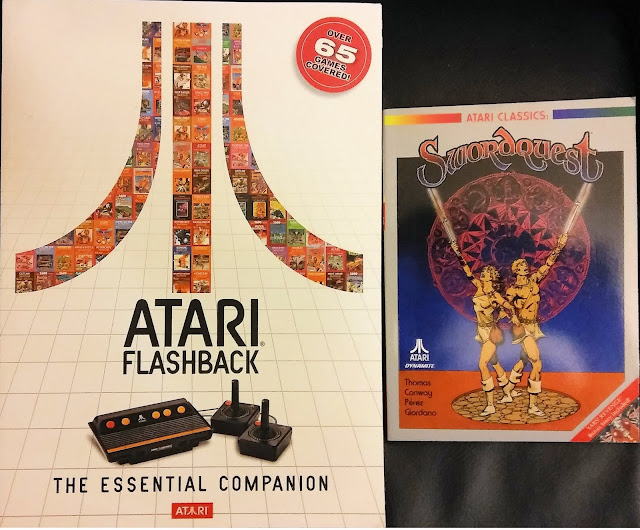 Lately there has been cheap and easy ways to get the documentation for some games thanks to these Plug and Play units.  Why they have made their docs a separate book to buy I don't really know but it is nice and handy. 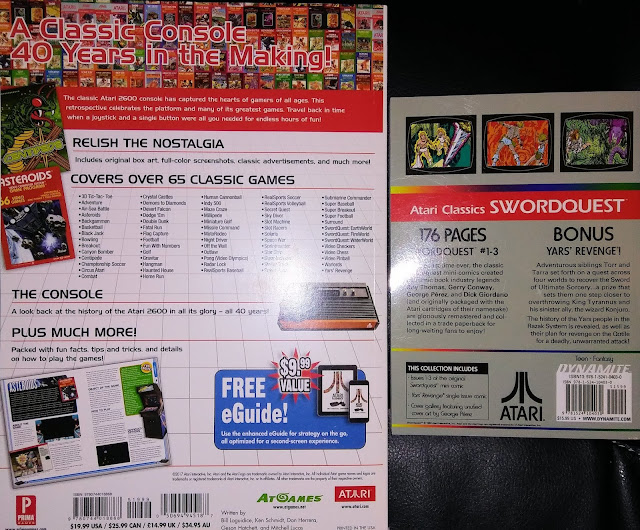 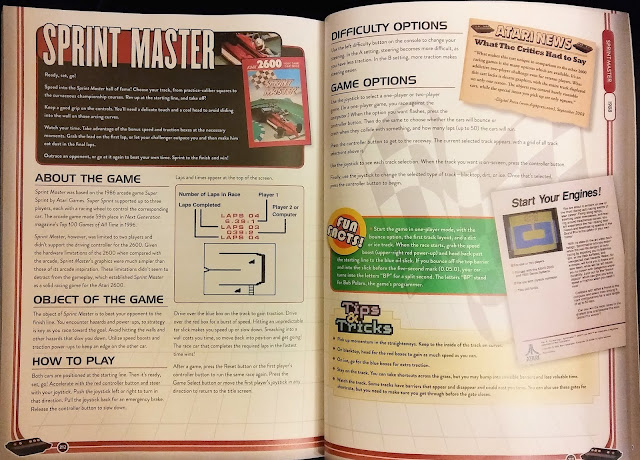 And one of the games covered from the later Tramiel era of Atari.  (Also one that fits on a left and right two page spread.)  This book is a mix of manual and short history lesson on the games.  Which is kind of nice really.

Adventures of Tron (I had it as a kid and it was kinda fun!)
Dragonstomper (One of the first console RPGs.  It is a cassette game that requires the Starpath Supercharger device.)
Frankenstein's Monster (Its FRANKENSTEIN.  That's cool!)
Sprint Master ( It looks kind of fun and I like those sorts of old school top down racing games.)
GI Joe Cobra Strike (Always wanted it as a kid and I have the manual after all!)

Shall we continue on with the 2600's competitor the Intellivision?  Yeah we shall. 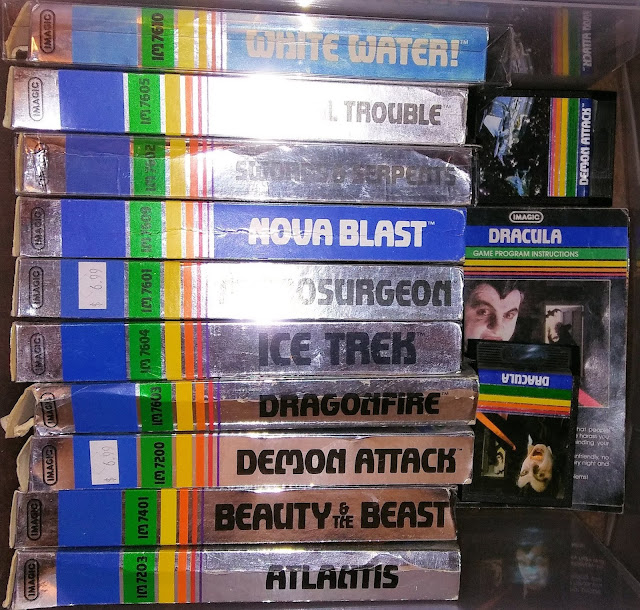 My Imagic collection on the Inty!  I am missing 3 games and the box for Dracula to have every title they released on the platform.  See unlike 2600 people Intellivision owners seemed to care more about keeping their games boxed and complete.  Note I am not listing Imagic games in the Hunt bits below because I want them all so its kind of cheating. 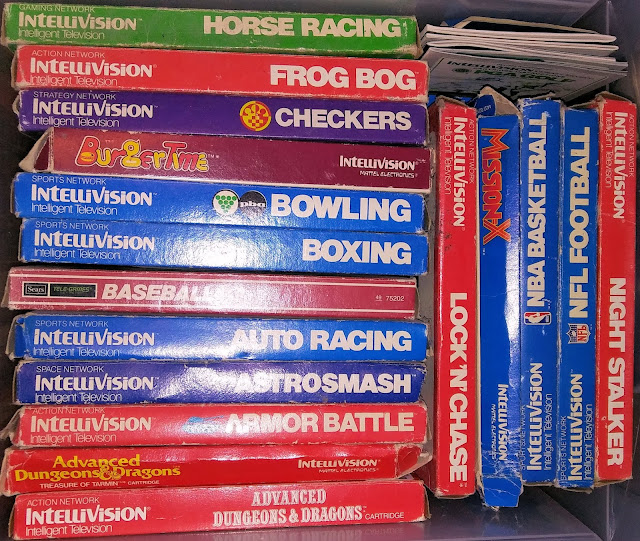 It is hard to tell but that is Golf loose but complete in the top right corner with some catalogs. 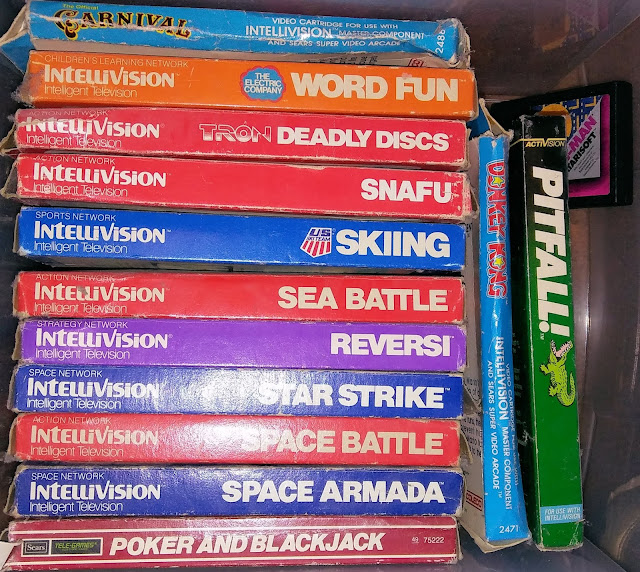 Pretty much most of this collection came with my Intellivision when I got it off eBay in the late 90s/early 00s.  Otherwise there wouldn't be a lot of the sports games.  Especially since in the Pre Crash days many games required two players!  MADNESS.  NOT SHOWN:  Empire Strikes Back because it is with most of my other Star Wars videogames for yet another collection post.

Masters of the Universe: Power of He Man (I quite liked the 2600 port back in the day and it is much better here.)
Thunder Castle (I really like it on the various anthology collections I have and would like to have my own copy.)
Thin Ice (You are an ice skating penguin and its pretty good.  I love Penguins almost as much as Sharks.  Almost.)
Shark! Shark!  (See above.  Except sharks.  Its a good game already and its got Sharkies.)
Tron Deadly Discs (It is Tron and I like Tron.  Also I remember the Aquarius port was pretty good really.)

Now we move swiftly and shortly to the Atari 5200 which is like my beloved 8 bit Atari computers only with terrible and unreliable hardware on nearly every front. 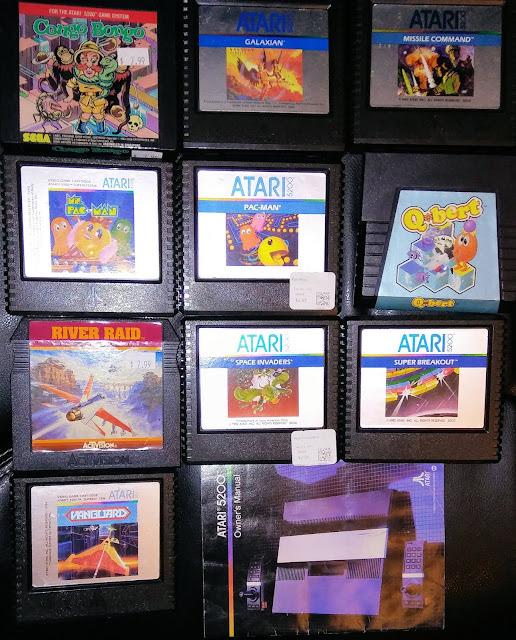 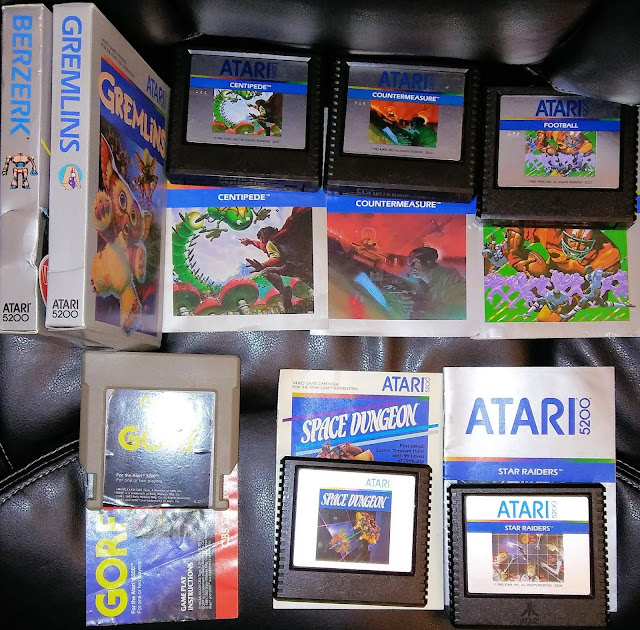 My with manual and boxed ones.  Given how some games could come with overlays that almost nobody kept I cannot say they are complete with 100% certainty.  Or really CARE as many I later on replaced with their 8 bit computer cousins.  Or use owning this version as an excuse to just download the A8bit versions for my SD Card drive.  (In some cases the 5200 games got dumped and hacked back in the day to be played on the A8bits when they didn't get an actual home release.)

Adventure II (An Atari Age home brew game that looks really good.)
Jr. Pac Man (Jr Pac Man is pretty rad and again, if it doesn't have a legit port for the A8s it TOTALLY COUNTS AS ME BEING LEGITIMATELY ALLOWED TO PLAY IT RIGHT?)
Kangaroo: (See above.)

Yes the 5200 is kind of butt and a pain in the ass console.  Not a lot I want and what little I do is mostly because then Atari 8 Bit Computer.

The system I forgot to add because I don't actually own the system yet.  Plus the controller kind of sucks.  But I am a weirdo who is fine with emulation but really prefers to own the games legitimately. 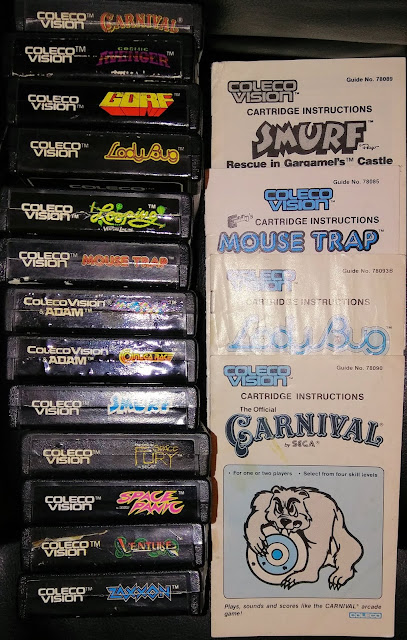 Not exactly the most amazing of collections but its a somewhat uncommon system mostly made up of arcade ports and usually the more obscure ones.  But it has a good homebrew scene, albeit one that seems obsessed with porting and remaking existing games on it using a stupidly hard to get fan made system booster you have to basically spend a 100 dollars on and get on waiting lists for.  To play MSX ports and arcade games.  That you can play the legitimate arcade game of.  Yeah I don't get it either.

H.E.R.O. (The best version of one of the best Activision games.)
Antarctic Adventure (Its a game about Penguins!)
Pepper II (It is spoken about highly.)

But let us end with the 84 and then 86 BECAUSE OH CRAP NINTENDO IS KILLING US released Atari 7800 which is arguably a Pre Crash system but only sort of.  But close enough really. 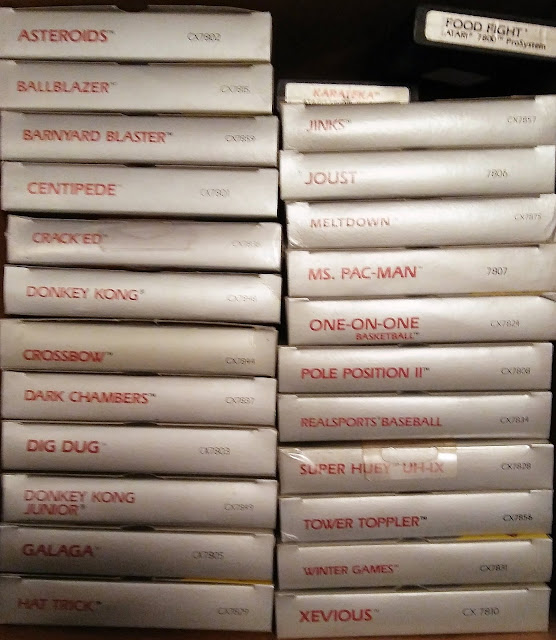 Sadly the two loose carts are manual free right now but there are places to get them from besides just downloading a PDF which just isn't the same.

Alien Brigade (It looks like a pretty fun light gun game.  Apparently its pricey though.)
Bentley Bear's Crystal Quest (Another Atari Age homebrew joint.  Plus I like platformers and Crystal Castles is a personal favorite of mine.)
Midnight Mutants (Its an action adventure.  WHERE YOU HELP OUT GRANDPA MUNSTER.)
Ninja Golf (It is both videogame golf which I quite like.  Plus its hilariously stupid as they add in side scrolling Ninja antics.)
Super Circus Atari Age (Yet another Atari Age homebrew as AA tends to keep their stuff in some sort of print and it is like an improved version of the pretty fun Circus Atari from the 2600.)

AND THERE YOU HAVE IT!  All of my classic console titles I own a physical copy of collated into a nice suite of images with a fair bit of titles I am searching for.  Yeah in a lot of cases I can play these on anthologies or Plug and Plays but I like owning original copies even if I don't own the system or would much rathe just play in an emulator.

I hope to continue this series but what to cover next?  Non PC and A8 bit computers?  8 bit portables?  NES and SMS?  (Yes my computer ANTHOLOGIES OF INTEREST is still coming.  I in fact had to move all of them off the storage tub my 5200 stuff is in to do this post.)