A Little Fun With the Dreamcast.

Ahh the Dreamcast.  That gloriously failed experiment that basically finished off Sega as we know it.  Between the utter mistakes and disasters Sega had foisted upon itself from roughly 1993 till then, it had very little chance.

Such things as a bunch of ill conceived and unworkable gimmick controllers for the Genesis (Menacer and Activator), too many different hardware versions and tricks that both confused and annoyed the consumer (three models of Genesis, the Nomad portable, two Master System models plus the Mark 3 JPN original, CDX, and some things like combo computers or TV sets or even in flight models and the Laser Active), and even a couple of hardware add ons that split the market and had dubious qualities to begin with!  (32x and Sega CD, the latter of which itself had two models!)

Add in how Sega of Japan was largely angry at the US division basically taking Nintendo head on and for a short time BEATING THEM and the mistakes made with Shenmue and the very creation of the Dreamcast project and you now have a company most famous for making terrible Sonic games and publishing an infamously awful Aliens title.

(Yes the Saturn was basically a boondoggle that effectively killed Sega in the US.  Oddly enough it was really the only Sega platform that was popular at all in Japan.  Funny that.  Yet the US release was a disaster that all but gave Sony an opening to score that Nintendo's Games Workshopsian-like ego and insistence of doing it their way turned into a two generation lead for Sony.)

But the Dreamcast had that SOMETHING to it.  In the time before Steam and iOS/Android stores and GOG.com it was the place for fun and interesting games with personalities and quirks.  Not always great but always INTERESTING.  And sometimes that is all you need!

It was a system with an integrated modem (sadly in the last days of dial up.  The broadband adaptor is apparently sought after), four controller ports.  Options for VGA resolution output through a monitor.  Memory cards with LCD screens in them.

Yet this same quirky spirit also makes the machine a bit of a pain.  The design requires you to open the machine every year or two to clean and adjust some metal prongs.  A ton of recessed lines in the machine and controllers that get gunk in them.  Many games all but demand a now hard to find gimmick controller to play properly.  The main controllers are wired from the bottom and only have a single analog stick and only a single pair of analog shoulder triggers not to mention losing one of the two memory card slots if you want a rumble or microphone accessory plugged in.  The damn thing is nearly as loud as an X Box 360.  The white/grey plastic gets yellowed over time.

And that is what has lead me to this little post.  You see a couple weeks ago I ran into a cheap copy of the Dreamcast version of my favorite arcade racer Daytona USA.  Then last week I went to a further away nerd shop and having not found much I simply HAD TO HAVE at that moment I picked up a little device: 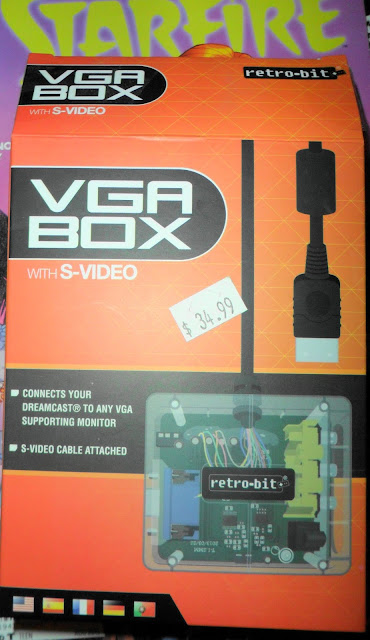 This here is a modern made VGA box so your Dreamcast can output 640x480 SVGA graphics on your modern monitor or HDTV if not an old VGA monitor if you want a CRT type to play light gun titles on.  My monitor I use my PC on actually has a VGA and a DVI input so I can use both if I want to, but honestly my HDTV is my main console space and it only has a DVI input.  Luckily either one of my graphics cards or the monitor had a little adaptor dongle so my VGA will still work.  (Even if it didn't want to work initially.  Don't know exactly why.  Maybe it just needed to warm up or a plug wasn't properly in?)

Also lucky for me my HDTV has a headphone jack input as VGA doesn't have audio output.  So a cable I had purchased from Five Below a while ago for another use now is put on audio duties.  A trip to Wal Mart for an S Video cable (plus I already have the composite/audio cables for it's audio needs) and I can plug it into my set that is old/good enough to have S Video inputs and the few games that don't work with the VGA still do.  (Or in the case of Dino Crisis I can start in TV mode, get the game loading, switch back to VGA and play, only having to swap my TV input back to the S Video input for the cut scenes.)

And that isn't the only fun bit of hardware I played with. 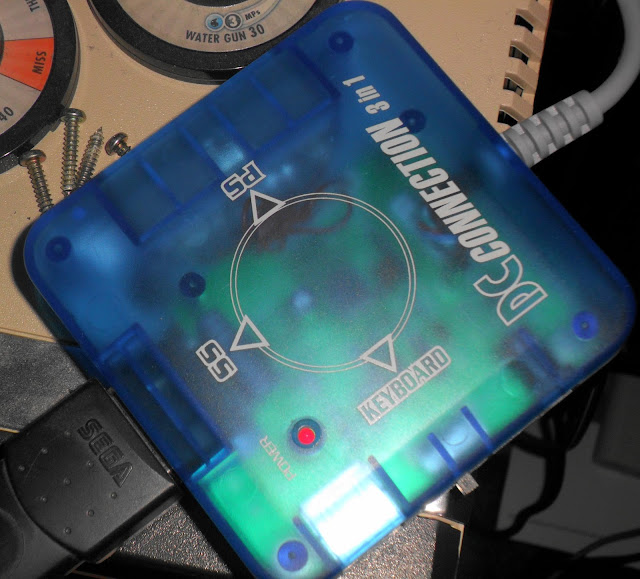 This little thing allows me to use Playstation 1, Sega Saturn, or PS/2 Keyboards with my Dreamcast.  I got this back in the day so I could use one of my PC keyboards with the DC for Phantasy Star Online gaming instead of buying an expensive DC only keyboard. 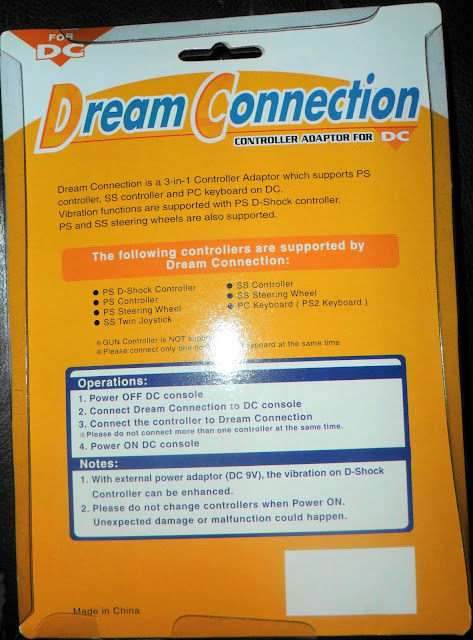 I am not sure all the controllers will work with all the games but it gives me more options and possibly makes some of my sillier peripherals a lot more useful.  For comedy I could even plug a power adaptor in to this for rumble features and have a giant spaghetti plate of cables and dongles coming out of my Dreamcast.  USB to PS/2 dongle for modern keyboards!  CATS AND DOGS LIVING TOGETHER MASS HYSTERIA.  Some Serial Experiments Lain stuff.

The Saturn Racing Wheel didn't seem to work with Daytona but the normal Saturn pad worked lovely with Capcom SNK. 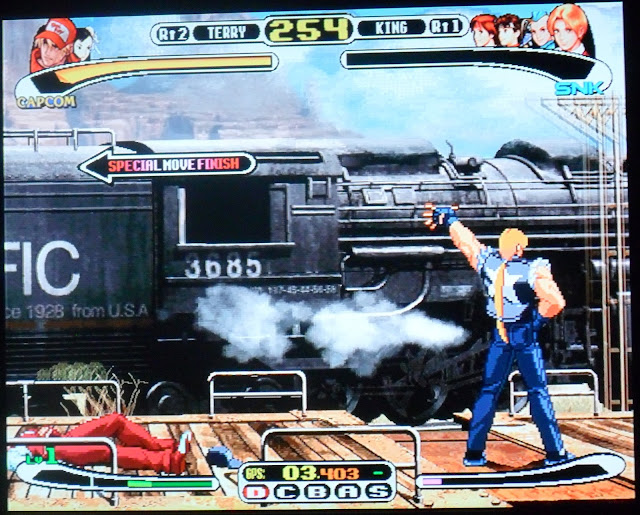 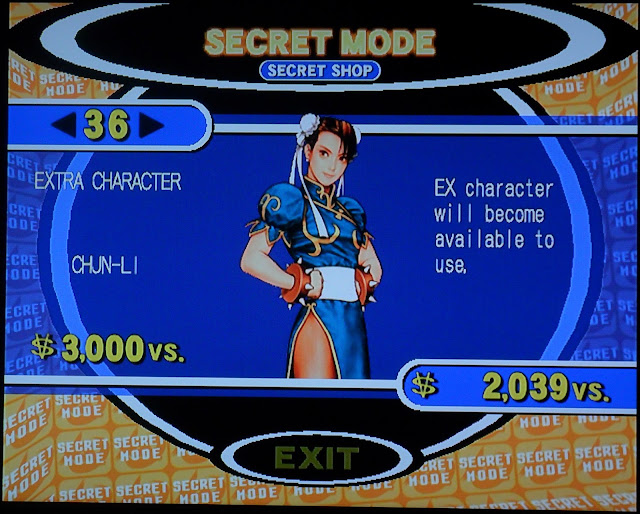 These are just photos of the screen so they won't be perfect by any means but even as they are it ought to show you how nice it looks. 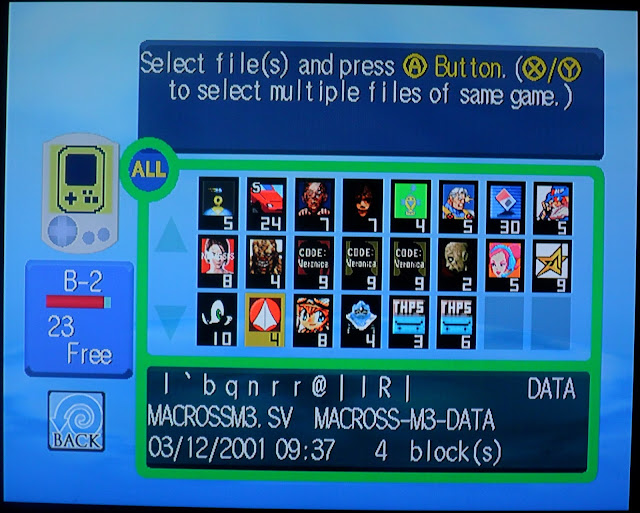 One of my four VMU memory cards.  This one has my only Japanese game (Macross M3) on it and shows to my shame that some of these games I haven't played in nearly 15 years in some cases. 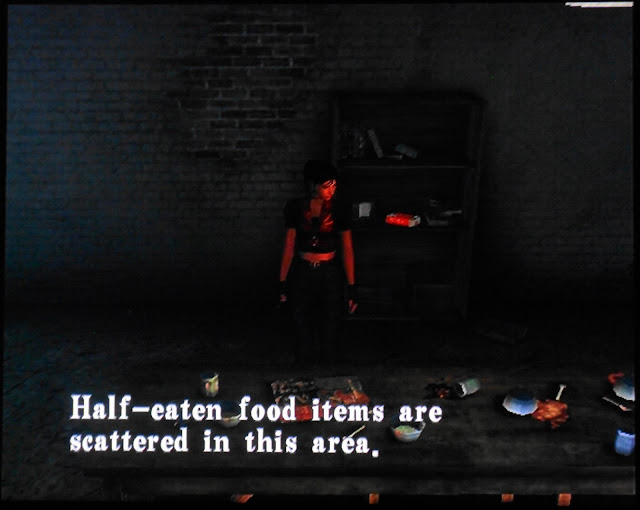 It is really hard to get a good Resident Evil Code Veronica shot.  And it is basically the reason I bought a Dreamcast.  MY CLAIRE BEAR!!! 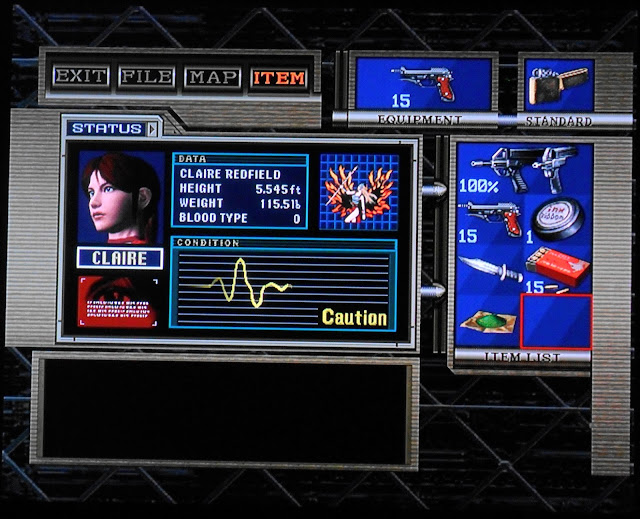 I actually played Code Veronica for a good 3-4 hours while doing these photos and the like.  I quite enjoy it still to this day. 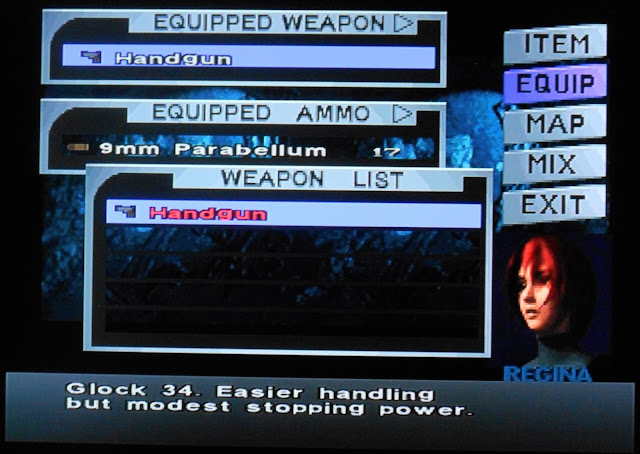 Dino Crisis was a game I got free with a second Dreamcast I bought when the first had the infamous RESET PROBLEM I mentioned.  This one got it while taking these photos and lead to me fixing both of them then playing an hour or so of Daytona to make sure it was working.  I also used this time to do some cleaning of the machines and some compressed air for the interiors. 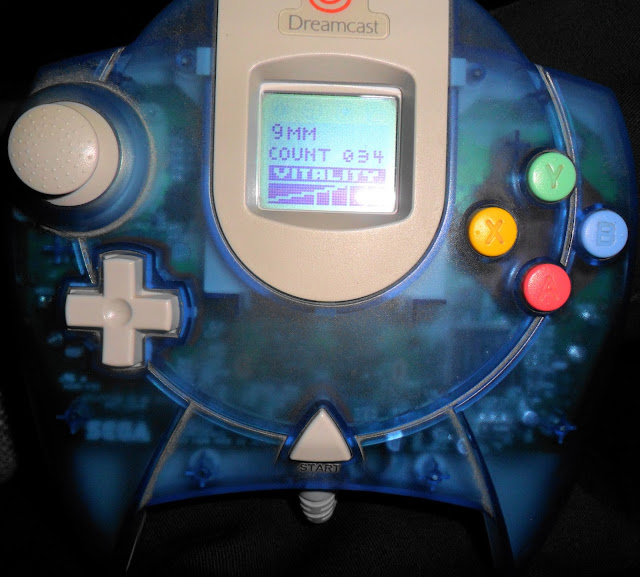 This controller still needs some more cleaning though.  I have to take a teeny tiny precision flat head screwdriver and run it through those nooks and crannies and then a cloth through everything else to get those bits of dust out.  Some foresight was needed I think.  But you can see the VMU memory card in action. 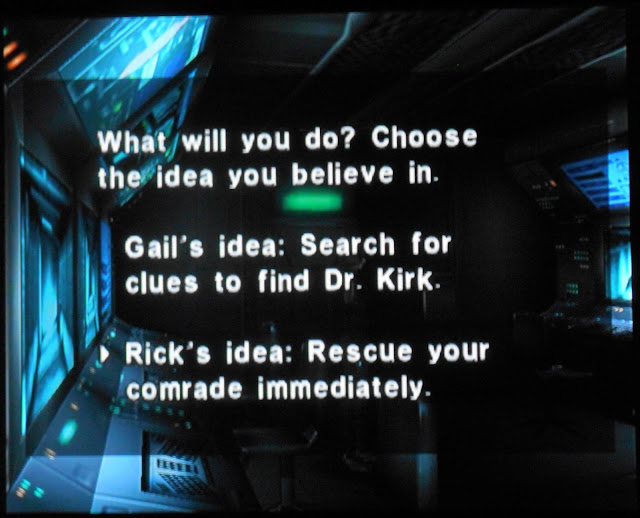 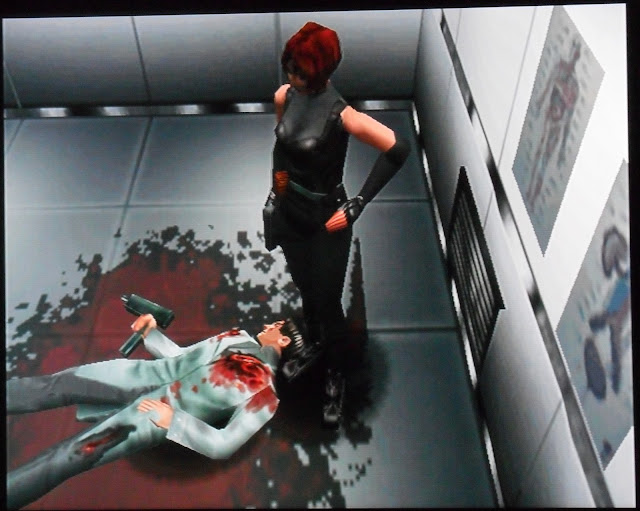 Except it really didn't matter so much.  Just like this game is almost a complete port of the PS1 original up to and including the "Z Buffer" texture issues that so many PS1 games had!  SHAMEFUL CAPCOM. 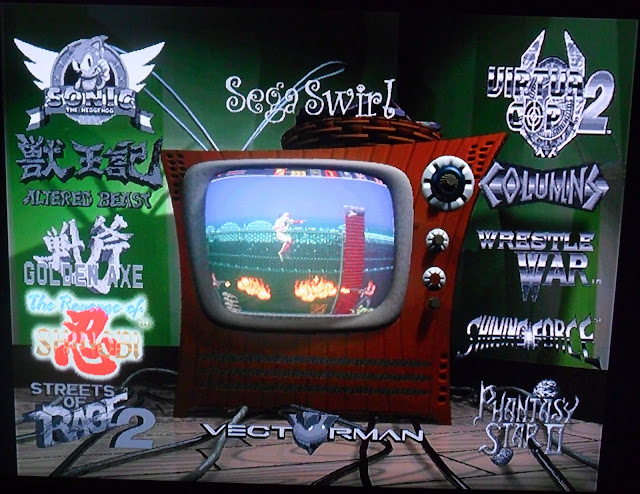 This Sega collection was a fair value back in the day although modern collections have things like save states and the like that this one does not. 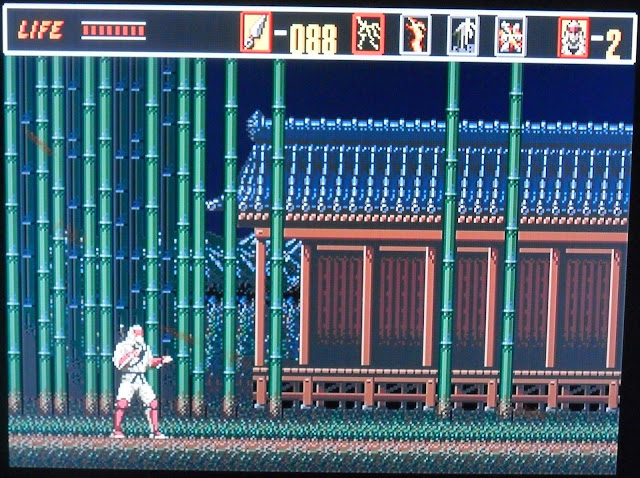 The output is pretty damned good though and now I can play it with a Saturn controller! 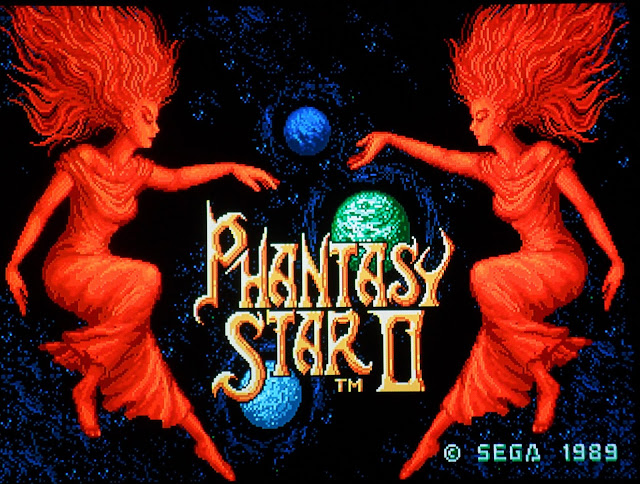 The legendary Phantasy Star 2.  That is a damn good screenshot I got. 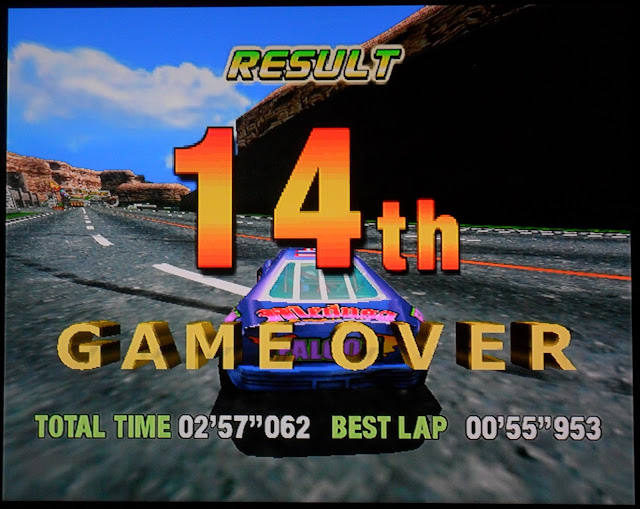 I have gotten a little better at Daytona's second track since this image but not better enough or something.

Hopefully this will inspire some of you to take some old games out of storage and play them for a while, either electronic or tabletop.  Still a ton of fun to be found and lots of neat things you can do in the modern age that in many cases make them MORE fun!
Posted by Captain Rufus at Wednesday, June 17, 2015 No comments: