For those unaware, a few months ago Gale Force Nine in association with the makers of Flames of War (Battlefront Miniatures) released after a few delays a new small scale vehicle combat game, Tanks!

Unlike your typical historical wargame this one is a quick playing and inexpensive skirmish game using some elements we have seen in games like X Wing Miniatures and Wings of War/Glory.  (The latter being basically the game that birthed this modern era of relatively easy to learn and quick playing miniatures vehicle combat games.  X Wing took the concept and made it THE game in the genre if not THE best selling minis game outside of the UK or possibly blind buy miniatures game formats.)

One notable thing Tanks! does over the two previously mentioned games is to be unpainted and unassembled.  Since from what I can tell these 15mm scale (or 1/100th) models are repackaged sprues from the Flames of War WW2 game.  (So the German tank I have assembled for this first look is 2 1/2" or so long, and about 1 3/4" wide.)  This explains how the game is relatively cheap with individual tanks going for 10 dollars US MSRP, and the Starter box for 25.

Let's start seeing what we get, eh? 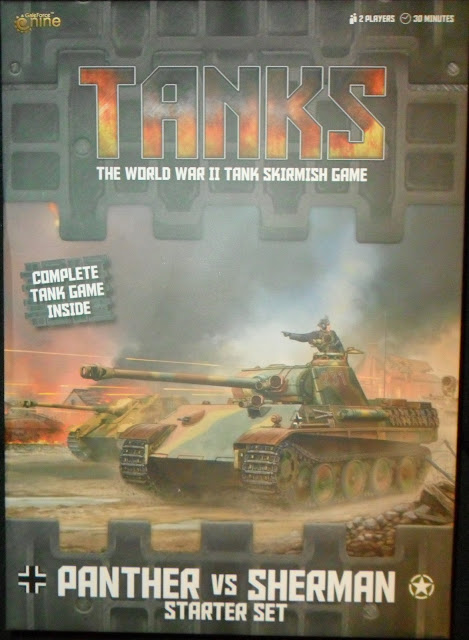 The starter set.  I was torn on getting it, but three tanks plus rules and dice and templates and the like for 25 dollars was too good to pass up.  Acrylic counter sets run around 13 bucks and as I said, currently the tanks go for 10 each. 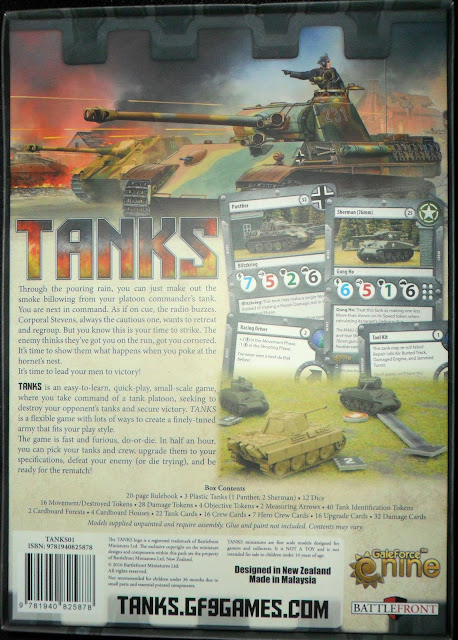 See kids, there are things coming out of New Zealand that aren't 9 hour versions of children's novels that already were done as 70 odd minute cartoons! 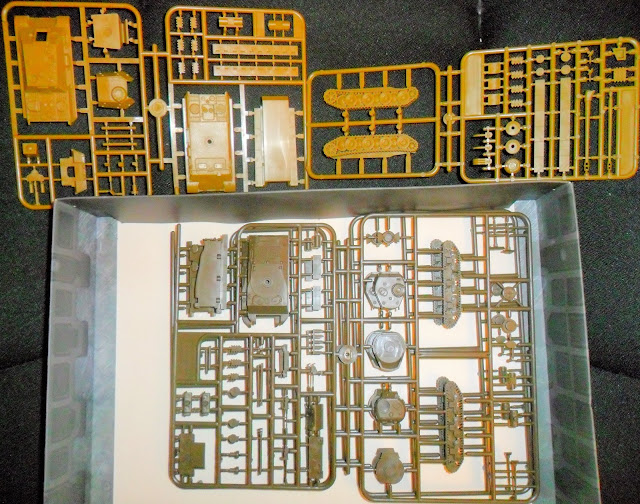 The sprues included.  The Panther for the Germans, and a pair of Shermans for the US forces.  They are molded in color meaning casuals can just cut them out and it won't just look complete arse.  Does a 5 dollar savings make it worth having them still on sprue and not as assembled prepaints?  Could a smaller company even afford to get them assembled and painted for only 5 more?  Probably not in both cases but 10 bucks a tank is a fine enough value.

(Or at least it is these days with Games Workshop pricing 1 inch tall plastic figures for 20-30 dollars.) 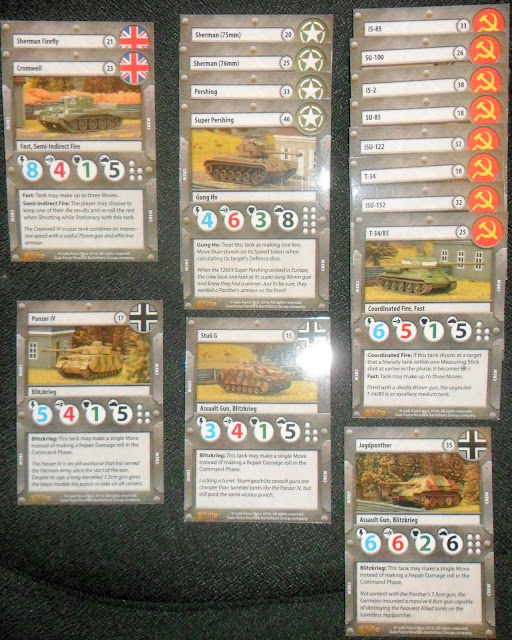 The cards included, discounting the ones I am using with my two UK tank purchases to make three 50 point forces for training games.  They are glossy and apparently can be marked with dry erase markers for damage.  (Those dots next to the black number.) 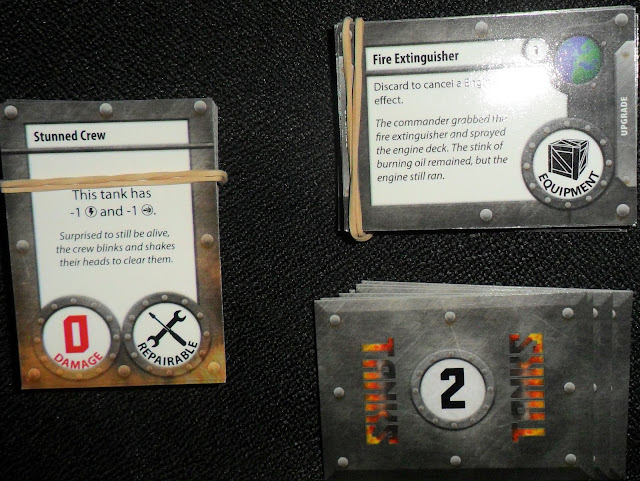 Like all good modern vehicle skirmish games (seems like a good term for this genre.  Or at least a start!) there is a deck of critical damage cards, and equipment/crew cards.  A neato thing for the latter is the point values are on one size to keep the exact loadout of a tank secret until the card has a reason to come into effect.  Nifty! 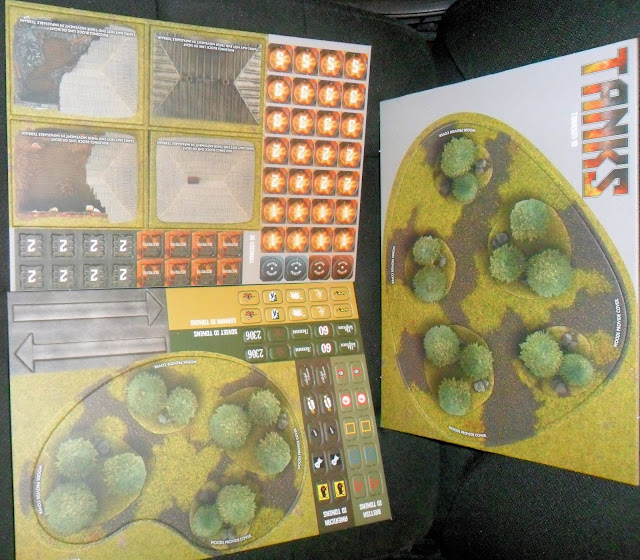 Three double sided cardstock sheets include some terrain to play with and the cardboard versions of the tokens you need to play the game.  A nice inclusion are five different icons to keep track of which tanks are what when you have multiples.  They are planning to sell some more terrain templates with special rules that are currently freely available to print from their website and are also part of an organized play program.  They will run around 10 dollars or so.  Possibly a little less. 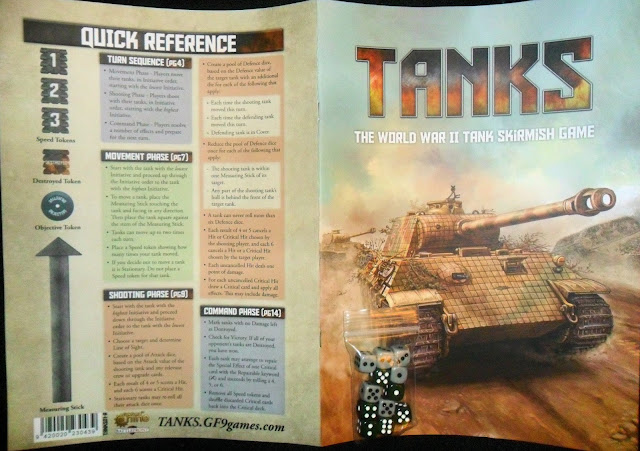 You get some colored dice and a nice large format manual that is 23 pages including back cover.  (21 numbered ones including table of contents page.) 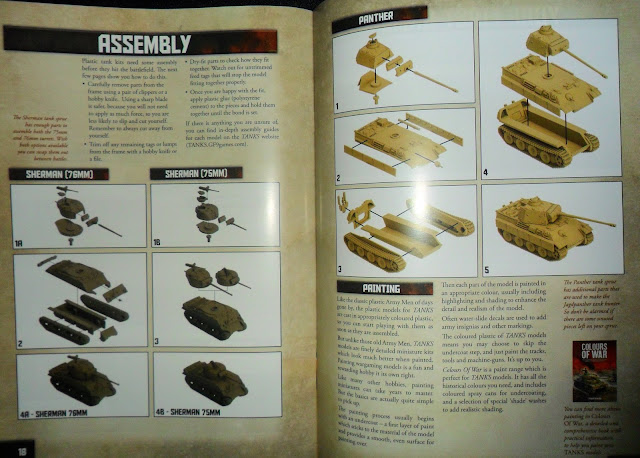 A quick set of instructions to build the models included although it sadly doesn't explain how to assemble the other Panther variant.  (The website does however.) 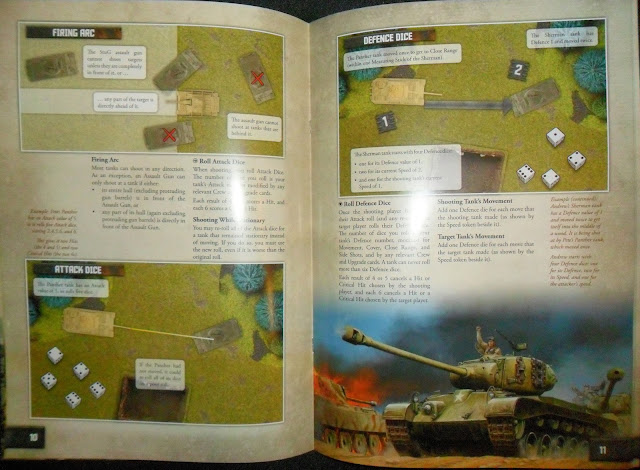 The rules seem relatively well laid out and have plenty of examples, although once or twice I had to reread a bit or two when the wording seemed odd.  It looks to cover most things although until I can playtest it I won't know for sure. 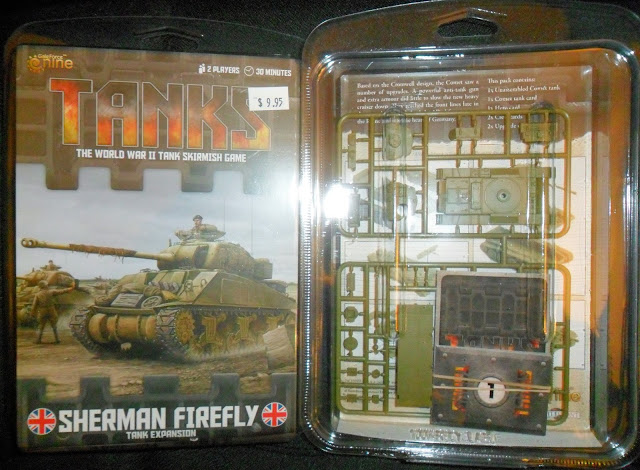 The British tanks I bought still sealed on their clamshells.  A Sherman Firefly and a Comet.  The Firefly can be built two ways like the Starter box tanks, but the Comet apparently cannot.  I am not too sure the info being covered up by the model is a good way to do things but I cannot really complain about seeing what I get.

(What actually comes in these clamshells will show up in a later post hopefully!) 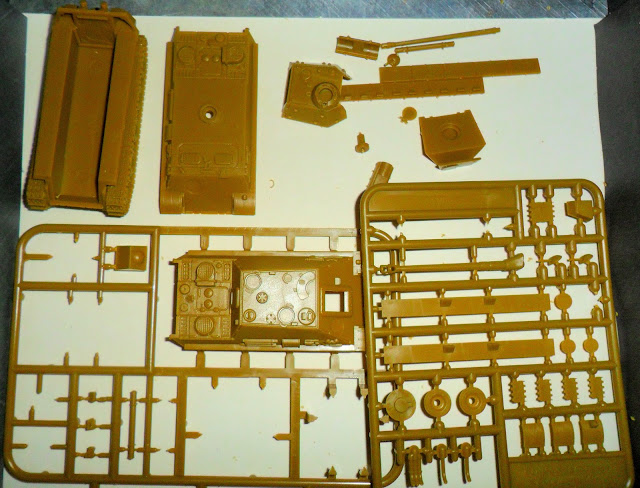 The plastic seems relatively durable although it isn't to the strength of Games Workshop plastic (well the bits that aren't overdetailed and spindly these days..).  Outside of one tiny gun breaking when I tried to clean the gate off of the barrel the parts were fine and seem crisp and well detailed with reasonable durability.  The above picture shows the chassis assembled and the parts that are dedicated to the Panther next to it.  Below is the extra parts and the bits needed to make the Jagdpanther tank. 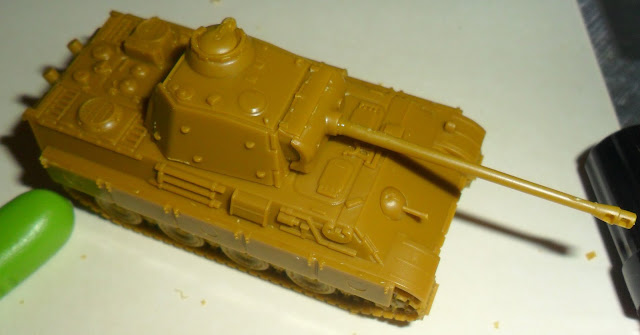 It wasn't too hard to assemble but my slow and methodical style took me around 45 minutes.  By and large the gate marks are hidden from view but a few spots they are not.  I would highly recommend using plastic model cement over superglue.  I generally used a Testors Cement Pen for the build and everything went together super easy and with a damn good fit.  While there are a few places you really need to be cautious when filing off gate marks, it being a WW2 tank means if you get a little too enthusiastic with your hobby knife as I did it is just wear and tear. 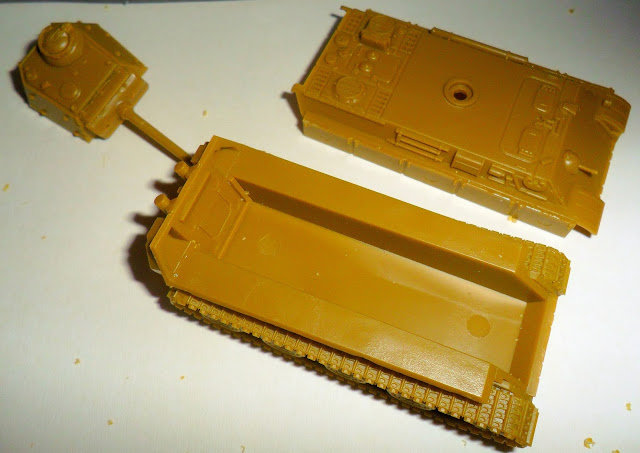 The chassis with the Panther bits showing what it looks like inside.  If you aren't planning to glue or proper sprayprime and paint the tank you will probably need to use a thickening agent on the turret peg so it isn't loose and spinning around ridiculously. 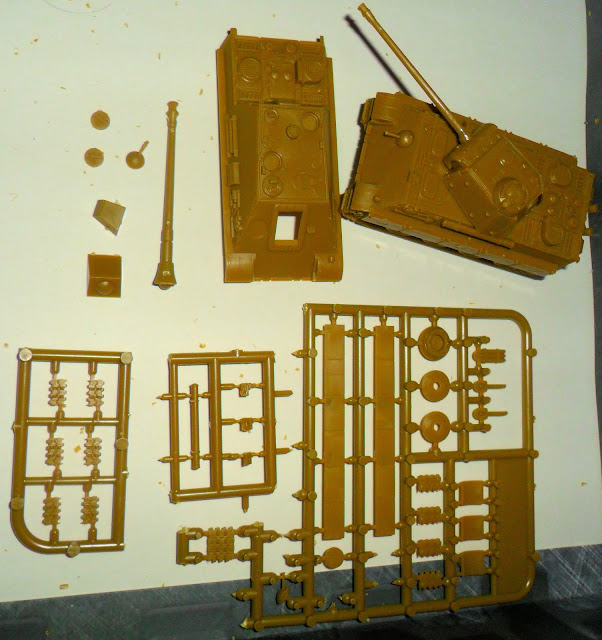 The Jagdpanther parts sitting next to the Panther.  The extra bits I suppose are for other variants or cosmetic modifications?  The manual just says to ignore them. 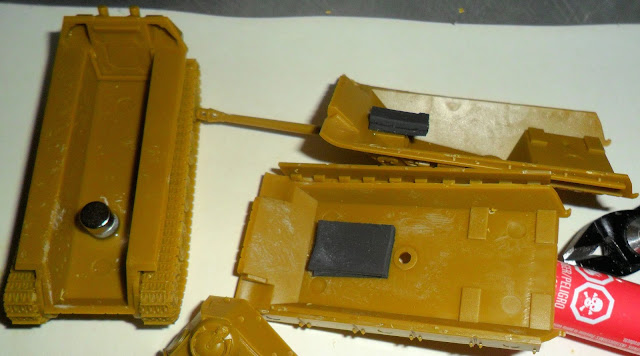 But because I am a cheapass I decided to just magnetize this sumbitch!  One Neodymium magnet superglued to the bottom, another one just using polarity stuck to it, and some cheap and much weaker strip magnets cut out and stuck/superglued to the top.  This makes the tops just swap out easily without any real effort.  I needed to stick two of each together to make them work.  A thicker Neo magnet and magnetic strip might have made things easier but I have what I have.  And at least the magnetic strips are cheap as chips anyhow.  The Neo magnets aren't so much and are a bit tougher to come by but it works. 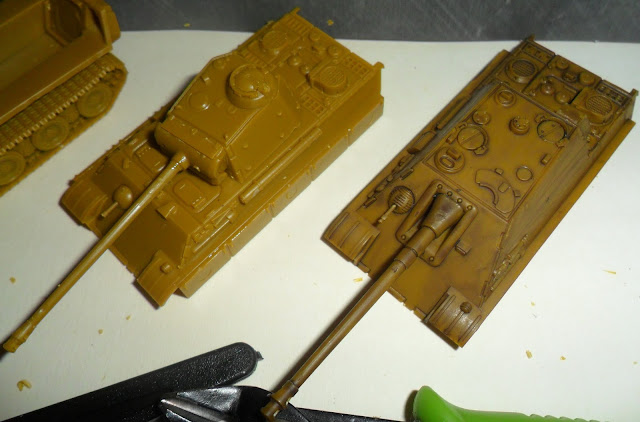 And I decided to do a little test.  I took the bare plastic Jadgpanther top and used my shade/wash of choice Citadel Washes Devlan Mud (Circa 5 or so years ago.  GW changes formulas and names constantly.  Its basically one form of the DIP TRICK more or less!) to cover it and just see how it looks.  No primer or spraypaint just wash and plastic.  I would say it comes out VERY nice for just a quick and dirty solution.  Meaning I will do the rest of this model like this outside of the treads and tread wheels which I will try to paint and drybrush/wash properly.

Join me next time (hopefully!) for that and the opening up of the British tanks.
Posted by Captain Rufus at Thursday, October 13, 2016 No comments: