Specs of a Computer I May Get

This post possibly wont stay here forever but my big expensive iMac's Hard Drive died and those machines are virtually unrepairable by the average joe.

And new ones are prohibitively expensive.  So this machine may end up replacing it:

(Update: Frig it I did it.  Waited a day and got an IMPROVED system. Memory upgrade to 1600, went to a higher wattage and quality power supply, went with a P67 motherboard over the H67.  P67 gives me the option to overclock while the H67 would give me the on chip graphics.  Ill go with the option to bad ass it a bit.  Yeah the memory can go faster than I need it to, but that means itll be useful if I decide to keep upgrading the system over the years.  Also the hard disk got another 140 gigs I dont need, but its got 64 megs of cache, and has twice the gbs per second.  All for 20 bones more than the top option.)

Why did I do this?

Well for the second time since owning my Intel based iMac, the hard drive died on me.  And its the THIRD time I have now lost all my data on the machine.  (Though this time I had backups should I choose to fix the big Mac and thus recover everything.)  I dearly, dearly love the all in one design and the sheer JOY of OSX but the lack of games access and the massive price of Macs finally took its toll on me.  I will probably get it fixed in the spring as my work computer replacing the little G5 machine I am posting this on, but I can't deal with it any more.  A new iMac with similar specs to the machines below is like 2500-3000 dollars and its designed so us end users can't fix the smegging things easily.

You want to see how I would have to replace the hard disk in the Mac?
SUCTION CUPS? REALLY?
Yes.  Suction cups, torx screws, a little energon, a lot of luck, and a whole lot of fear.  My Applecare warranty ended in the summer so I would probably have to pay 200-300 dollars to have this done only to probably have the dang machine do it again to me in a couple years.

With a desktop PC I can pretty much drag and drop components to my heart's content.
Want to go to 8 gigs of RAM?  Awesome.  5 minutes of work.
Want to get a faster video card, or go dual card?  I can do that too same timeframe.
Multiple hard drives or even dual drive RAID formation?  No problem.
Even a faster CPU is pretty cake.  Its possibly the ONLY major upgrade I might have a shop do though. Just wait 18 months and put in the latest Core i7 hexcore or even octocore for 200 or so and my machine will be even longer lived.

I was hoping my big iMac would be my main computer till at least 2012 or so.  I guess not.  Instead it will be the special little noisy guy below.  With regular upgrades and some canny pricechecking from newegg I could be running this comfortably till 2014, (the big FOUR OH GOD SO OOOLD) maybe even 2015.

Posted by Captain Rufus at Monday, January 24, 2011 No comments:

Over at Arkham Asylum in Norwich CT there has been a couple rumblings about me doing a demo of the game.

I wouldn't mind doing one at all because I really like the game and how goofy you can run it, or with some tweaks its more of an X Men type game.  Or Rifts.  Or Fallout.  (And for a Fallout game, tell me this isn't THE BEST MUSIC EVER for its late 50-early 60's feel:  )

While my actually running the game and what silliness level I would do depends on the potential players and what they want, the following house rules are ones I would probably use no matter what:

1: Origin Rolling:  In Gamma World you normally roll for two origins, with a double roll (made nearly impossible with the expansions that add in even more origins) on the chart equaling Enhanced Human as one of them.  For my house rules, players may choose one or both origins at a starting XP penalty of 125 each, or 250 for Enhanced Human and you MUST roll for the second origin.  Players selecting one of their  two origins must choose it FIRST then roll for the second one.

2: Ability Scores:  In Gamma World your first origin is your primary and the second is the secondary. (NO WAY!)  Your origins give you an 18 in its' ability, and the secondary a 16.  Normally you roll 3d6 in order for the other 4 abilities.  BEFORE ROLLING, players may choose to assign the 4 rolls as desired, and instead of 3d6 roll 1d8 and add 8.  (Meaning instead of a spread of 3-18 you have a spread of 9-16 and choose what to put where.)

3: Alpha Mutations:  Normally you draw a single card and deal with it.  But normally your Alpha Mutation changes every time there is an Alpha Flux or an Extended Rest.  This is a little too random for me so here is what we will do:  At creation the player draws THREE cards from the deck and chooses ONE.  Outside of an Alpha Flux or other in game effect that would cause a Mutation change this is your PC's power.  When something comes up that would make you draw (Extended Rest changing being removed.), you can instead burn a Healing Surge and keep your power.  Draw 3 select 1 also happens for your level 4 and 8 choices.  There is NO power draws outside of Flux type events or character generation.

4: Player Mutation and Tech Decks: These are BANNED unless the player chooses at creation to instead of building a 7 card deck, build an 8 card. The DM at start gets to draw and KEEP a card.  If you are going to be a degenerate munchkin paying 4 dollars for a package of 8 blind buy cards you must pay the DM for this right.  By giving the DM one of them.  Tip your friendly neighborhood Dungeon Master.  (At DM's discretion other gifts such as booze, candy, toys, or helping them clean up after the game could be accepted as well.)

5: Keeping your Omega Tech even when you shouldn't:  Normally an Omega Tech item either degrades or goes Tubby Bye Bye when used.  If you REALLY like your new toy you may choose to keep it upon receiving it (aka you make the choice THEN AND THERE, no waiting) you PERMANENTLY sacrifice 1d3 Healing Surges and its yours for the life of the PC.  If for some reason you have no Surges left to sacrifice after the roll,  (Like your PC has 2 Surges total and you roll a 3 meaning you now have -1 Surges) your PC is now unable to use ANY Omega Tech cards at all.  This also means you LOSE all Omega Tech you previously owned instantly.  It serves you right for being that greedy with your toys.  Outside of permanently sacrificing Healing Surges to keep an Omega Tech card, failing an Omega Charge roll works as normal.

6: Gun ammo:  Normally in Gamma World you get ONE shot with any gun or ammo type weapon, and if you use it a second time in an encounter its out of ammo permanently till your PC can somehow find more.  This is sort of silly.  Instead of a heavy accounting of ammo now you have the PC's level in shots per encounter PERIOD.  No overshooting.  Whenever the PCs go to any place capable of salvage or to purchase more ammo the DM will tell you how much it will cost (or time wasted, probably spent in Healing Surges for the day) to stock back up on ammo.  Whenever a 1 is rolled to hit with an ammo weapon it has run out of ammo for the encounter, AND until the character can find some reloads.


7: BE A MAN: Roll for everything by the book and accept whatever you draw for your Alpha mutation and start with 250 bonus XP.  If you choose this bonus you may not expend surges to keep an Alpha, but may sacrifice 1d3 to keep an Omega Tech.  You may also never use a player deck of either, and never get to draw 3 take 1 at level 4 and 8 either.

8: D&D Essentials Races for an Origin: These may be chosen and counted as Enhanced Human either in rolling or taking a 250 XP starting penalty for creation.  Any abilities of the D&D race that are not applicable to Gamma World are ignored but otherwise the race works as listed.
The above I think makes for a slightly less ridiculously random game with a more stable Gamma World Earth as opposed to one where everything and everyone seems to change what they can do constantly.
Posted by Captain Rufus at Friday, January 14, 2011 2 comments:

3 Snowfalls in a Week Keep Me From D&D Encounters

Behold.. SNOWMAGEDDON.  And my Macross Tomahawk kit painted up in my idea for Steiner Arctic Camo as a Warhammer in Battletech. 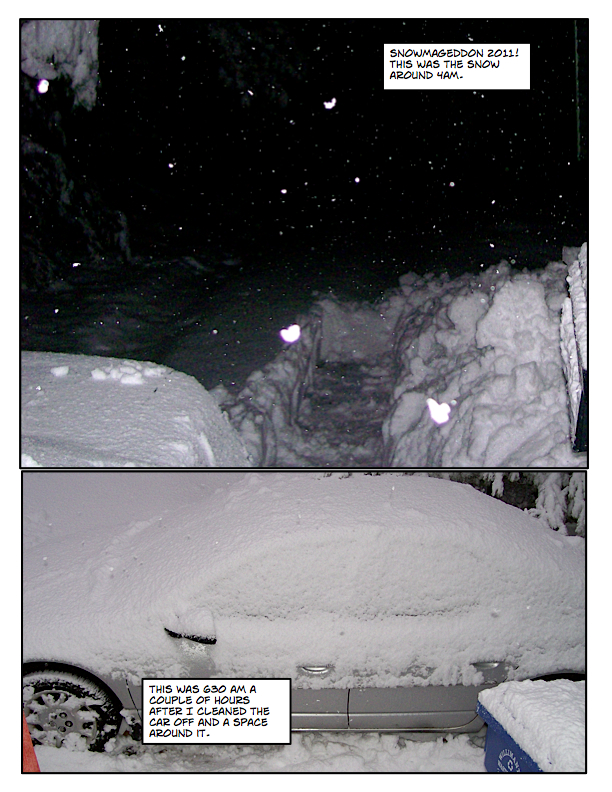 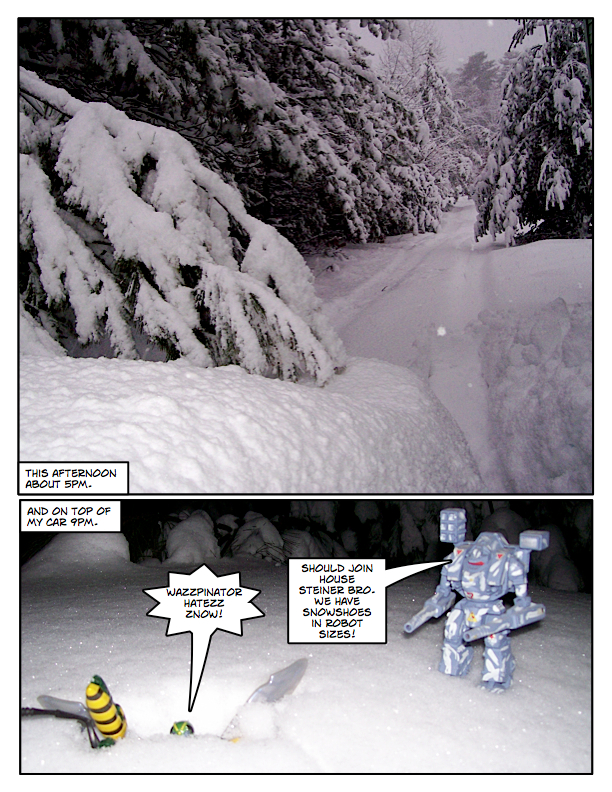 I don't even think poor Waspinator's feet touched my car's roof even that deep.  Was too cold to worry.  A foot or more of snow between midnight and 5pm will do that to ya even when you clean the car off in the middle.
Posted by Captain Rufus at Wednesday, January 12, 2011 No comments:

Call it a super quick review of all 11 Warhammer 40K electronic games counting expansions as part of their parent title in a handy chart form.  It goes alongside my first attempt which I did for my Castlevania blog.  This one came out a bit better, and covers that wild & wooly series of games based on our favorite overly priced game with mediocre and easily broken rules. 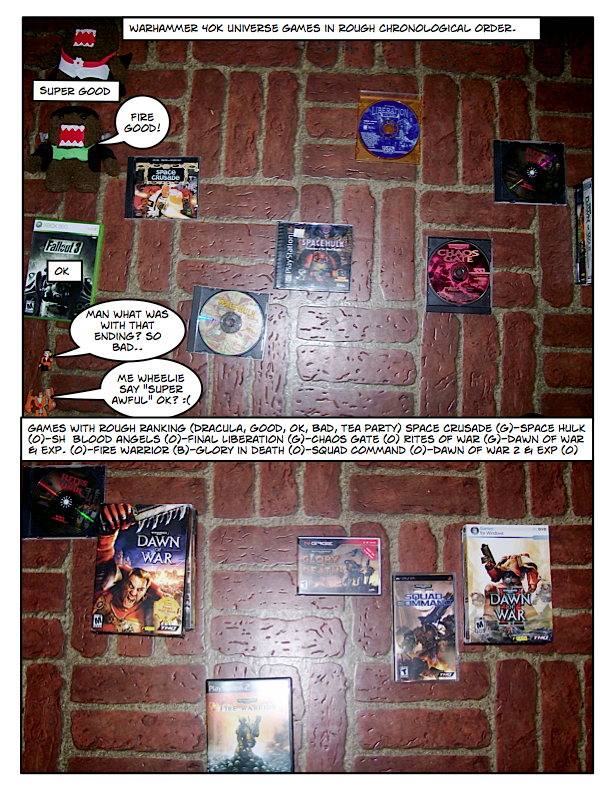 Posted by Captain Rufus at Thursday, January 06, 2011 No comments: