Review Corner: A review of the RPG Ruins and Ronin

Sigh.  I just KNOW this one is gonna tick some folks off.  But I have to.

Ruins & Ronin: (Written by Mike Davison with assistance from others.  Available for 11.25 in softback format from Lulu.com.  1 dollar for a PDF.  79 pages, 74 numbered.) 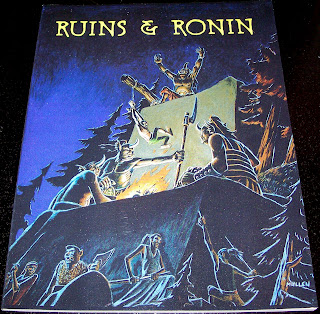 Sigh.  Where to begin?  Ruins & Ronin is basically about 10-20 pages of actual changes from Swords and Wizardry: White Box by Matt Finch.  Which you can buy or get for free online.  And its a simplified version of regular Swords and Wizardry.

Which I own.  Because it was a FREE PDF FILE ONLINE.  (I have bought some supplements for it to show my appreciation though.)

See, Swords and Wizardry is an attempt to remake 1974 little booklet Original Dungeons & Dragons, albeit one normal people can understand.  S&W normal adds some rules from the supplement books, and a few bits of modern RPG design thoughts such as the ascending Armor Class from D&D 3rd edition.  (That whole Open Game License thingamajobber.)

Its what we call a "Retroclone".  For the most part these games aren't really designed to be played.  They are just handy excuses to allow for new adventures and supplements for the games they are based on as they tend to be as close as legally possible to the original RPG.  Plus its somewhat easier to get folks to play the older games if they can buy books or download a PDF.  Most are released at a VERY low price usually just to cover costs.  Other entrants in this category are: OSRIC (1st edition Advanced Dungeons & Dragons), Basic Fantasy (Basic Dungeons & Dragons), and Labyrinth Lord (Also Basic D&D, except less changes to the D&D ruleset than BF.)

Well, Lulu was having a holiday sale and at the time I had money I did not realize I would need for hidden bills a few weeks later so why not support those Old School Renaissance folks and buy some stuff?

Now, I knew Ruins & Ronin was a conversion of Swords & Wizardry, but the problem is?

ITS BASICALLY SWORDS & WIZARDRY WITH A FEW NAME CHANGES.

Perhaps I did not read through the book properly (reviewer note: I mostly just skimmed through it a couple times.  Which in the long run is saving me time to read something I haven't already read before.) and I am missing some nuances but as best I can tell the only real changes are:  a new weapons and armor chart, new Asian themed magical items, and a few new monster types.  The 3 classes are basically just Fighting Man, Cleric, and Magic User renamed and with different equipment restrictions based on the new ones in this book.  Even the spells are just the classic D&D ones without even name changes.

And.. that's about it.  Being based on White Box D&D the weapons all use D6 for damage with a few minor plus or minus modifiers sometimes, and everything is barely detailed.  I understand the OSR movement is about "rulings not rules" and the whole appeal of these games is how rules light they really are, but all Ruins & Ronin does is basically reprint Swords & Wizardry.  Its really MAYBE a 20 page supplement.  It should have been in the OSR fan magazines Knockspell or Fight On! (Both available from Lulu.  I recommend both.)

There is almost no fluff, zero internal artwork, no real GM or player advice in running an Asian themed version of OD&D, and no real "feel" of a fantasy Asia.  I was hoping to use it as a springboard to do a more rules light version of "Legend of the Five Rings" a game setting I absolutely love but don't really wish to play using the D20 ruleset I have, AD&D using Oriental Adventures, or learning the original L5R ruleset.

I honestly could have done it myself and saved some money and trees!

On the upside it does look nice, albeit without any artwork inside whatsoever far as I could tell, and having some new critters is always nice.  I didn't notice the usual typo/spelling errors most fan and pro products seem to be infested with now, and it is easy to read and written well. 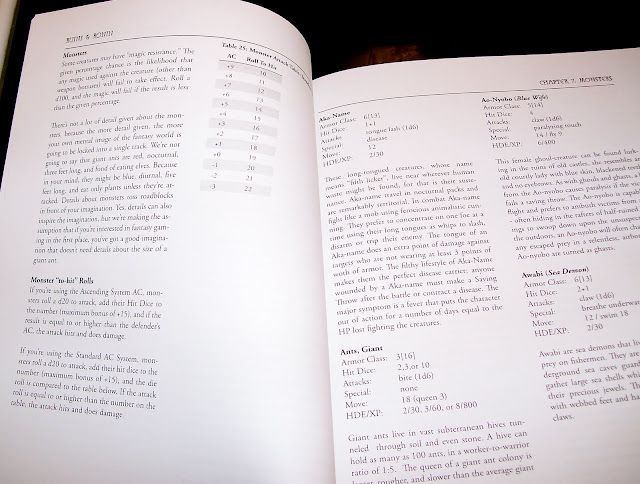 You do get one new race, the Half Ogre, but all the D&D staples are gone, and the replacement isn't really all that appealing for long term play, though pretty decent for low level campaigns.  Some of the other Oriental Adventures/Rokugan/L5R player races are present to be fought against, but not to be played as, making Ruins & Ronin even more human centric than OD&D itself.

So in final analysis I have to say on my Good/Ok/Bad category its.. BAD as a full purchase print product, and OK as a 1 dollar download for you to just print out the new content to use with your existing old school Retroclone RPG.  Its a minor set of changes to a product most people interested in Original D&D styled games probably already have, and it does little for anyone who may have wanted it to do a Mythic Asian styled game.  While the new creatures and magic items ARE really good. Its so barebones and "Do It Yourself", I think everyone should just download or buy the ACTUAL Swords and Wizardry with its minor extra level of detail, and then grab a used copy of AD&D 1st edition Oriental Adventures or Legend of the Five Rings and.. DO IT YOURSELF.   In the end the extra information, flavor, and fluff of either of those products will produce a vastly more satisfying experience than relying on this book.

I feel bad about writing the above, but its just how I feel!  Its priced fairly but its virtually a waste.
Posted by Captain Rufus at Thursday, January 14, 2010

You won't find me judging you on your opinion, everyone's got one. I've not read R&R, so I can't comment on its content.

I would like to comment about:
Its what we call a "Retroclone". For the most part these games aren't really designed to be played. They are just handy excuses to allow for new adventures and supplements for the games they are based on as they tend to be as close as legally possible to the original RPG.

The only "clone" that was made for the express purpose of making publication legal was OSRIC. With the large amount of 1e books still available, the intent was to make the OGL work for the fans of original AD&D. Happily, it seems to have worked well.

S&W was created to make OD&D more accessible with a few changes that the author felt would improve the game (one saving throw, ascending Armor Class for example). While S&W does allow 0e adventures to be created, it is indeed meant to be played on its own and is regularly played on its own as its own game.

You cannot legally purchase a PDF of AD&D, OD&D or any WotC book anymore. WotC took care of that in April. The retroclones are our only link now to those games in a legal way.

If you notice, I DO mention S&W (at least full on and not White Box anyhow) does have some changes. Heck, check my tags. I have actually done a few bits of rules and stuff for it myself.

(I would do more but my gamegroup isn't full enough for any sort of RPG right now, and when we are up to minimum RPG group size one player generally wants "Mechanically Custom" characters ala D20 D&D, and the other generally dislikes the D&D Dungeons and hordes of interesting critters genre. And keeps trying to push Savage Worlds on me for everything. I couldn't get S&W off the ground even though I tried!)

I have a couple of the Retroclone books. (Basic Fantasy, the Normal S&W, and now R&R as ones I have read a serious amount of, and I have perused bits of OSRIC and Labyrinth Lord.)

In most cases even when there are things that probably SHOULD be changed they are left as close to Gygax as possible.

I would disagree that Basic D&D or AD&D 1-3 NEEDS a retroclone book though.

Finding any of them is far easier than using Lulu or some other purchasable source.

Ebay, Noble Knight, Troll and Ripo.. I mean Toad, Amazon Ripo.. I mean resellers. They all have tons of the core books available and CHEAP.

With shipping I think I have gotten THREE AD&D 1st ed copies over the years. A nearly cherry Easley cover, and 2 decent condition original covers. (I kept the Easley one and put a nice book cover on it. The other 2 were gifts to the gamegroup. Who didn't appreciate it as usual.)

Honestly the only version of D&D that's hard to get is original, and I still got it for under 50. The book looked like that Pikachu "loving" bulldog had gone on a date with the box, but the books were in solid condition.

(Reminds me I still need the Gods book to finish out my set.)

Sure the PDF bit is tough, but honestly dead tree is and probably will be for the forseeable future so much better than virtual its not funny.

Real is always better than virtual. Companies can't take real away from you as easy. You can resell real. You can lend out real. Real doesn't care if you have batteries or a power cable.

Honestly its so easy for anyone online to get most editions of D&D legally and cheaply most of the OSR's reason for being really HAS to be so they have the easy excuse for making their own supplements.

(Which of course then lead to the skeevy Carcosa, but that's not S&W's fault.)

I'm not dissing S&W in any way. Its honestly a GREAT GAME for what it is. I would choose a house rules Mentzer Basic or Castles & Crusades over it for my classic D&D as I always wanted it fun, but its still excellent.

But I do have to say the high levels of adherence to what Gygax decreed from on the mountain is a bit annoying for my taste.

But I never worshipped D&D's rules as being good or even great at the time I first encountered them.

These days I like the rules light option as I can add in or take out what I want, but as a 13-18 year old in the late 80s/early 90s this really didn't cross my mind.