Last Thursday I ended up getting double teamed.  The keyboard and SD card drive emulator both showed up on the same day so it was time to GET.  THINGS.  DONE. 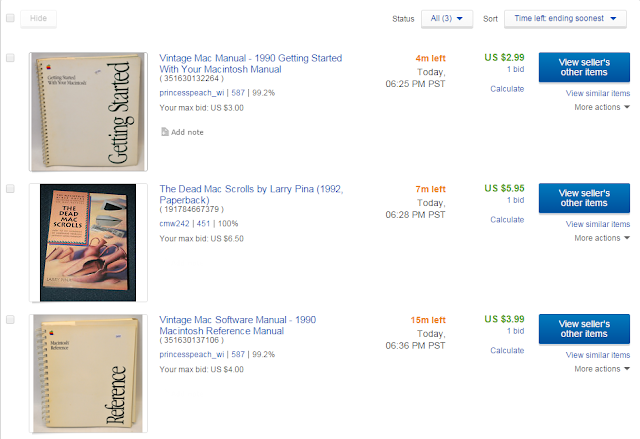 I place a couple cheap bids for some reading material.  And I have a few more books and tools I might need on watch list.  But these were about to go, so I hoped for the best.  And won. 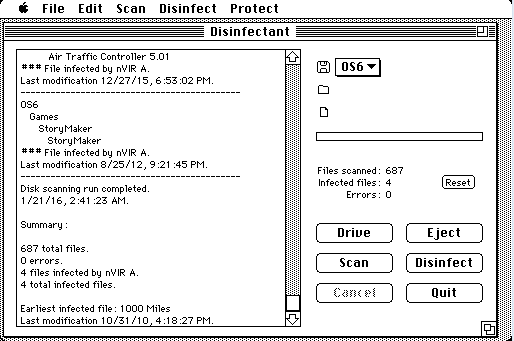 Since Mini vMac is running roughly 9 times faster than the actual Mac Plus I use Disinfectant off of the D disk from System 6 Hell and quickly blaze through the virtual HD cleaning 4 files.  Oddly enough so far ONLY some System 6 Hell disks have infected files. 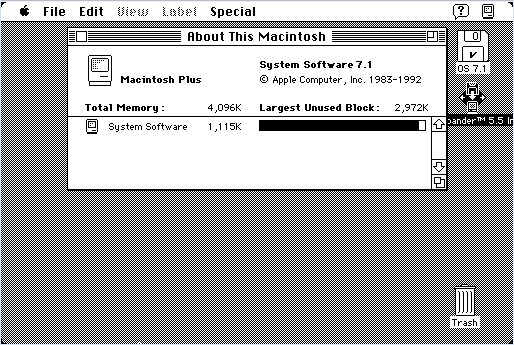 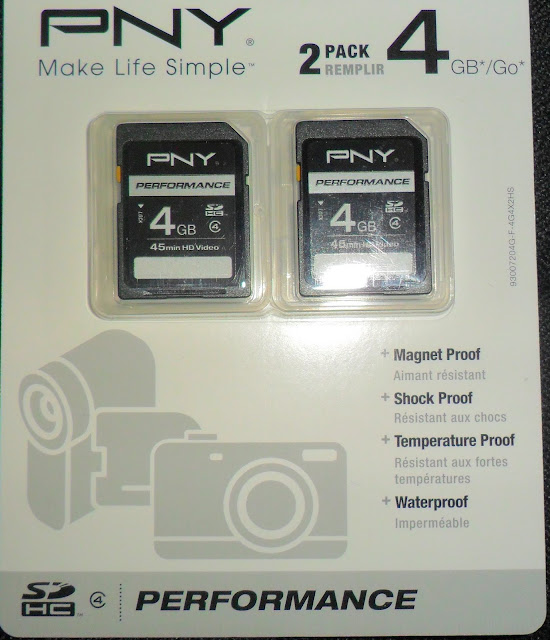 For like 13 bucks I grab a pack of 4 gig SD cards to use.  Honestly if you can get them cheap and easy just grab a couple 2 gig ones and make 1 gig hard disks.  You do not need 2 gigs.  Especially without USB 3.0 transfer speeds when you swap hard disk images to try things out.  Oh.  And MAKE BACKUPS.  You never know when you might need extra copies of your hard disk image.

I prepare my SD cards using the instructions as the hard disk firmware mode isn't set on the drive device on ship. 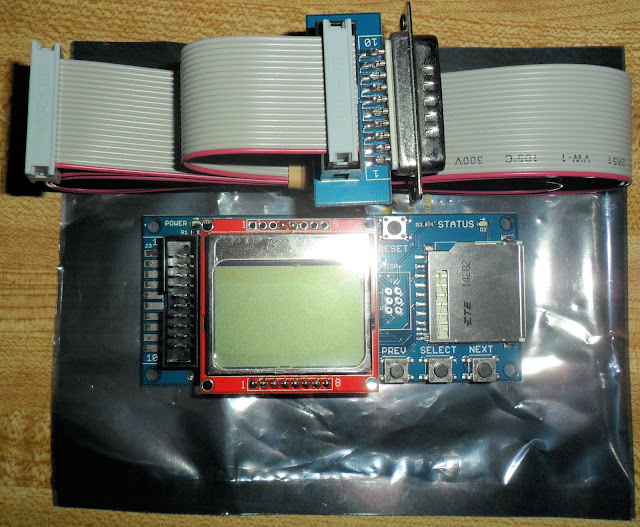 And here is the drive!  It includes the cabling and a way to just plug it internally to replace an internal drive though using the device seems like it would be difficult...  One pause I do have is the connector board to the back of the computer's 19 pin D Sub port is open and bare.  Show a little caution with it!  Make sure you don't have that static build up and keep your animals away from it, just in case.

And the back of the board.  Nothing special really. 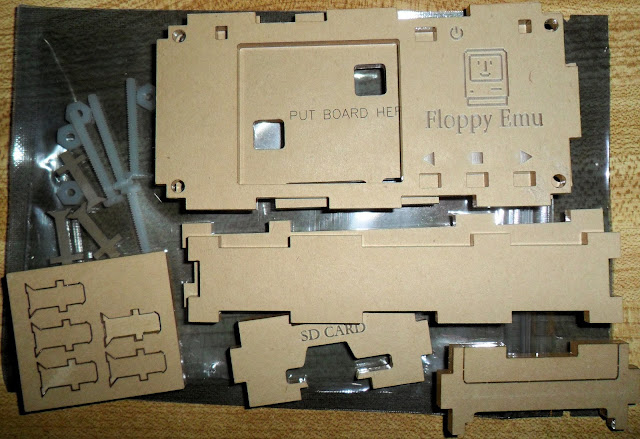 And the laser cut acrylic case which sadly doesn't have a bit for said D 19 connector board.  Each side of each piece has a removable brown paper cover.  I merely removed the internal paper so I can possibly spraypaint it once it gets warm.  Outside of maybe a rubber band the case assembles tool free. 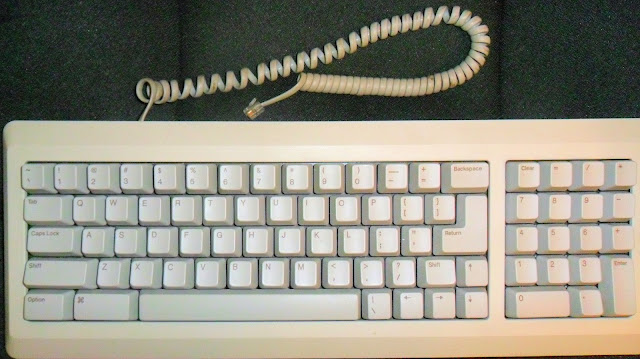 And the keyboard an official Apple one.  Looks to be in very good shape overall.

Some screws are missing and it has a bit of velcro on the bottom.  Nothing major but.. a bit of pause here. 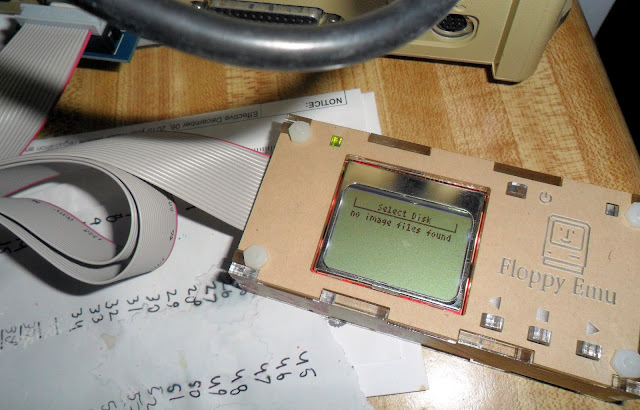 While the drive and case came with a quick sheet of printed instructions that are also available on the website I didn't really need them all that much to assemble the case.  It looks nice as it is honestly.  Maybe even a little classier than if I went for the properly transparent look. 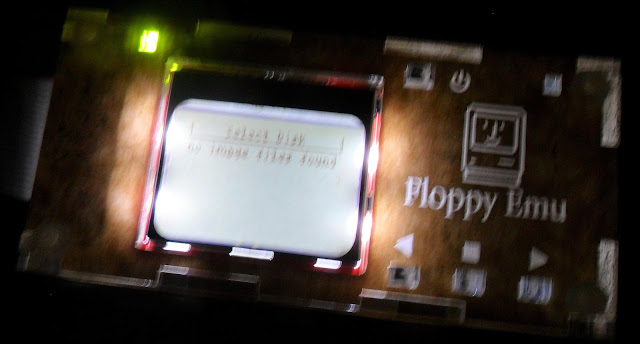 And it lit up.  The rather cheap LCD screen is front lit, and there are left and right green power lights that are piped through bits of plastic.  The left is system power for the device, the right shows drive access which is a very handy visual aid to see if the otherwise silent drive is working. 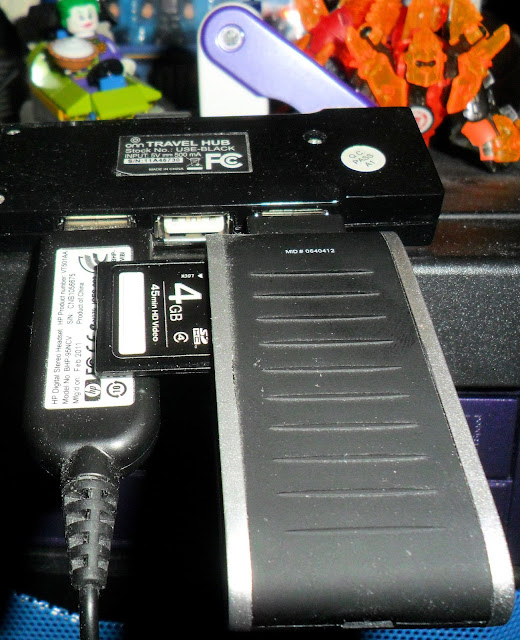 If you don't have one, get a USB card reader.  This one cost a couple bucks and I have had it for a year or two.  Does just about any type of flash memory card that had any sort of impact.  Just plug it in and the card looks like just another drive to Windows 7. 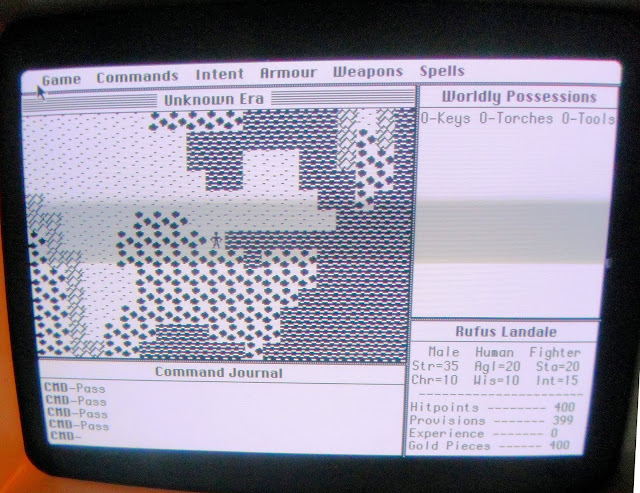 And it being able to do both hard disk and floppy means programs that are self booting like Ultima 2 and Ogre work lovely.  And unlike the emulation they run at the speed they were designed for!  Also for system intensive programs that have system files on the disk this can let you load them up without all those nasty resources being hogged by the operating system. 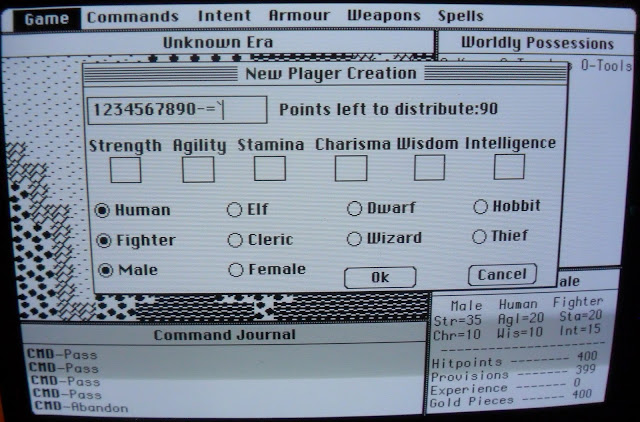 I also use Ultima 2 to check the keyboard.  While every key works, some require multiple presses to come up.  But the more I use the keyboard the more reliable the keys seem to be.  Maybe it just needed to "wake up" after years of disuse?

You can also set the default mode here.  It seems to only work in one way at a time so no hot swapping or anything so again, use Mini vMac for the quick file work, then just use the programs with the device. 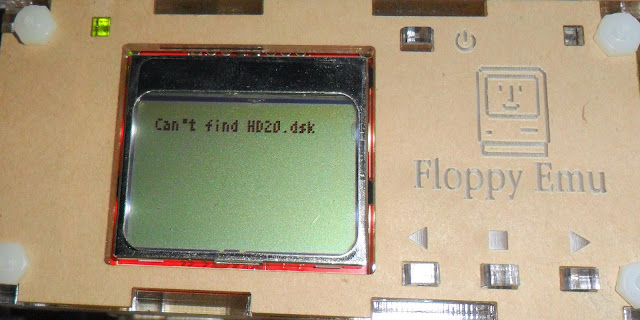 Sadly and annoyingly, you must name your hard disk file HD20.dsk.  So no putting multiple hard disk images on the device that I can tell.  In a later update I will show another issue that can come up. 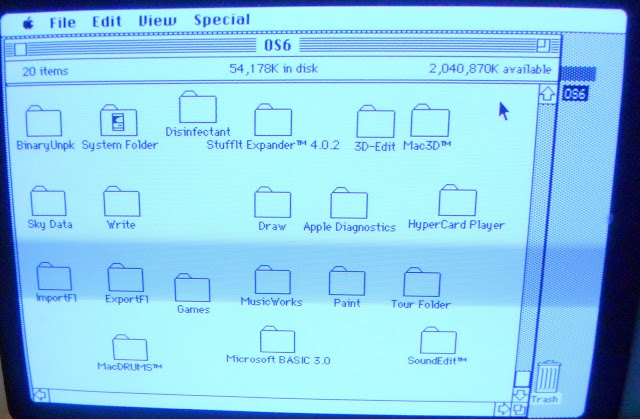 And we are LIVE!

The little LCD will show what is going on in case you are wondering.  File name being used and all!  Track and side reading for floppies. 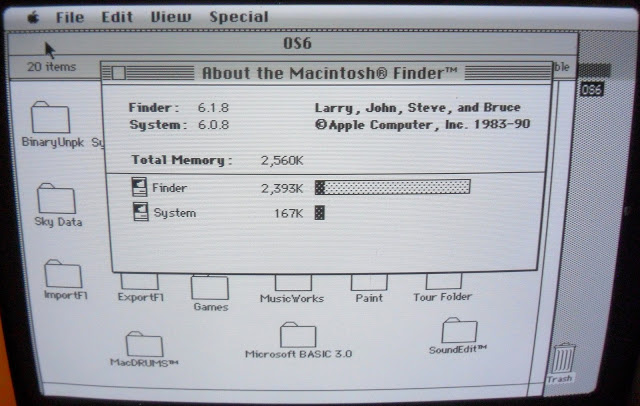 Finder shows us what is going on, and how much RAM and resources we have.  We see this machine has been upgraded to 2.5 megabytes of RAM.  Nice!  Sadly its really not enough for System 7 which runs both pokey and some games crash, due to RAM apparently. 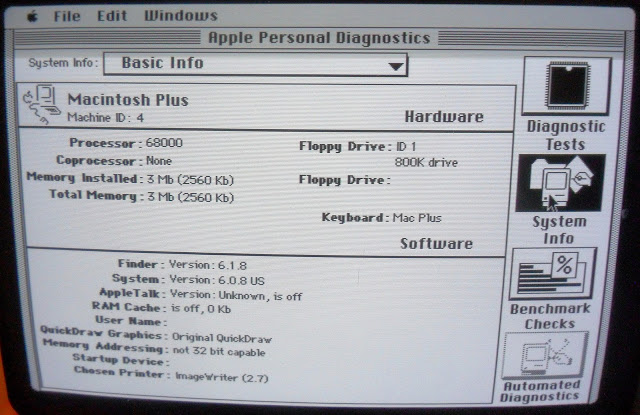 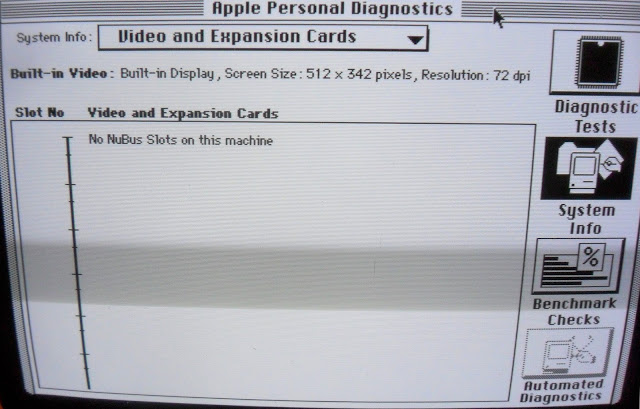 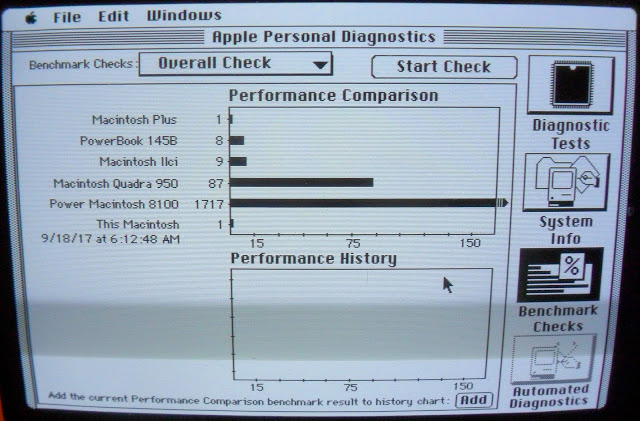 Yes, we are a Macintosh Plus at a speed of 1. 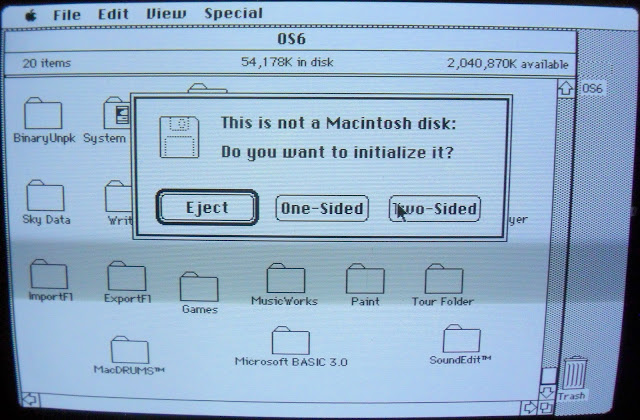 Throwing in a floppy disk into the drive at least shows the drive kind of works.  Sadly for disks that are 800k or 400k only a single side can be formatted and it takes a lot of tries.  The drive needs a good cleaning. 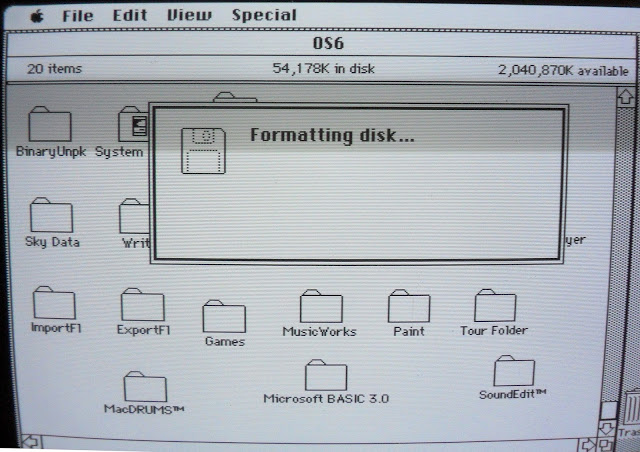 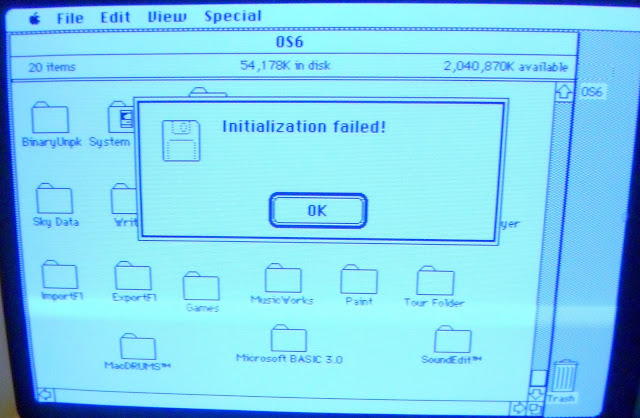 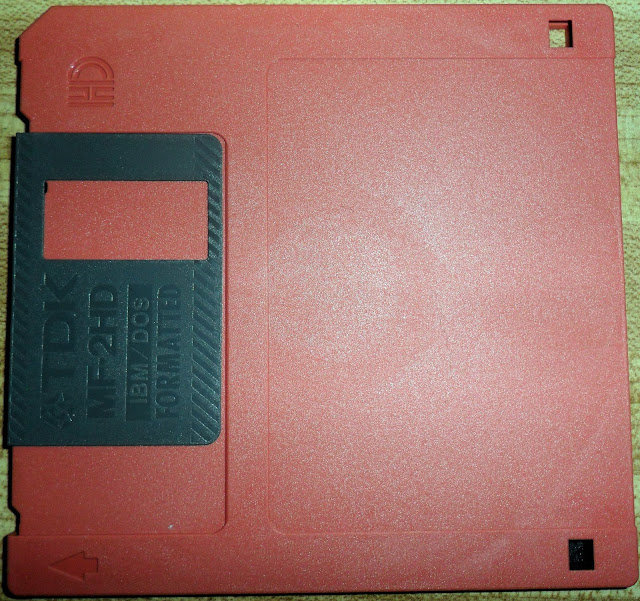 These are clearly 1.44 meg disks and won't work at all. 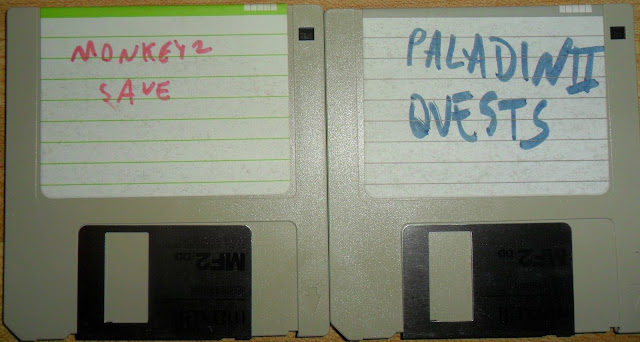 However these old Amiga disks are 800K. 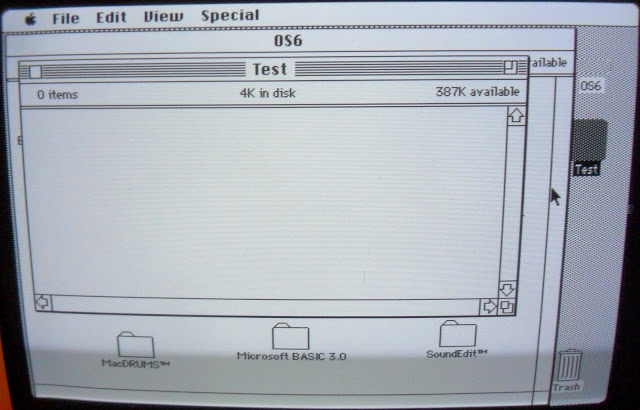 And finally we get one formatted!  But only single sided.  Notice that like most storage on computers the maximum size is not what you get to actually use.  Generally a few percent is taken up by file system and other such things that let the disk be understood by the machine. 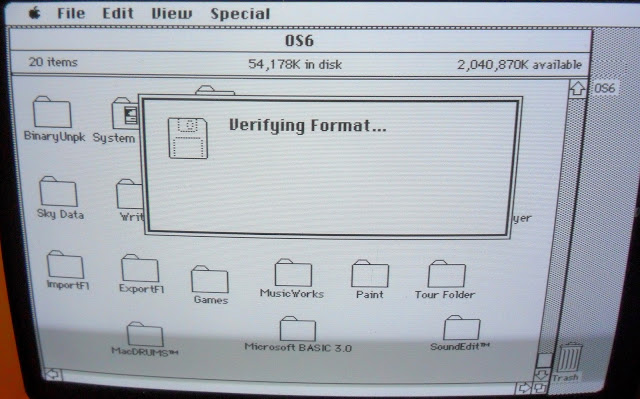 A lot of times this is where the formatting would get before giving me the failure message. 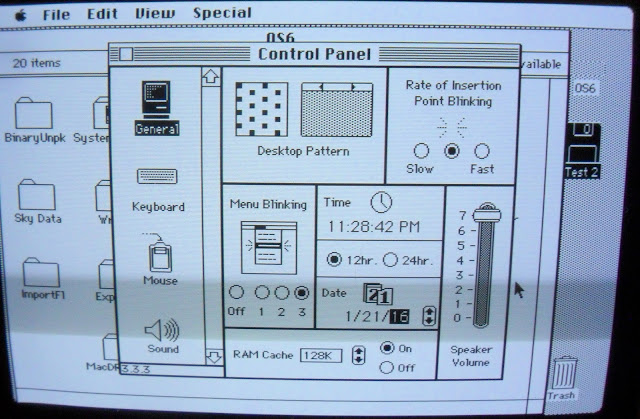 And here we see the Control Panel where things like mouse tracking speed, speaker volume, and various things can be tweaked.  As I have 2.5 megs of RAM I give the Cache 128k to ideally speed up various actions.  I could also install Multifinder and get limited multitasking but this machine is probably too weak for it overall.  (Its automatic in System 7.)

So now we have a generally operating Macintosh Plus.  Next time we organize and install tons of software, hoping most of it actually works!
Posted by Captain Rufus at Friday, January 29, 2016

I grew up through the computer age, but reading your report of using it makes me feel so old. I'd completely forgotten how to do everything your showing us.

This knowledge is disappearing unfortunately. Thanks for the refresher :)

Well the knowledge is out there. It's a matter of finding and collating it into being useful. Ish. I'm not sure there is a huge need for black and white Mac tutorials outside of maybe historical interest.